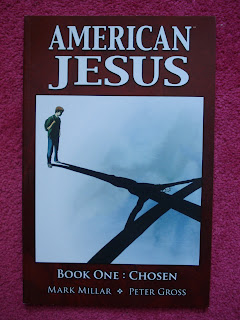 
From what I can gather, many internet people consider Mark Millar a sellout Hollywood whore. Having only read Kick Ass, Superman: Red Son and now American Jesus: Chosen from his canon of work, I can't say I'm of the same opinion.
The plot: 12 year old Jodie Christianson (I believe they call that post-modern irony) and his friends skip school to investigate reports of a discarded nudie magazine in the woods. Jodie is lagging behind playing on a games console when a truck on the bridge above him swerves to avoid a dog and plows through the barrier, crushing him. Somehow Jodie manages to survive this accident completely unscathed, but is taken to hospital for observation. There he is visited upon by his local priest, whom he asks for the explanation of his survival. Could it be, he asks, a miracle? Father O'Higgins is quick to quash any such notion and tells Jodie sometimes stuff just happens and there's no explanation for it. Jodie's mother, however, has no qualms about her son's brush (or lack thereof) with death, directing him towards passages of the Bible which tell of Christ's second coming and the impending apocalypse. It's not long before Jodie is turning water into wine, curing the sick and spying on the girl next door when she's changing. So could he actually be the re-incarnation of Christ?
The good: Millar plays this pretty straight. Jodie acts the way you would expect a 12 year old who suddenly discovers he has amazing abilities to act- he and his friends immediately gather bottles of water and try to turn it into wine.  The best bits of the book are definitely when Jodie and his friends are together, Millar pitches their dialogue and reactions perfectly; for example, when they put Jodie's healing abilities to the test by trying to cure Markie's squint, with no apparent effect- "I guess we shoulda looked a little harder for a real blind person, man. Maybe this stuff doesn't work on people who just got weird-ass eyes." "Up yours, Lucas Kornblith. I'm waiting for a big operation." Although I do feel Millar may have missed a trick  by not having Jodie charge for these tiny miracles he's producing- it's what I would expect a 12 year old  who smokes, drinks and skips school to do, particularly as Millar doesn't have him exhibit any of the weight or guilt of his burden. 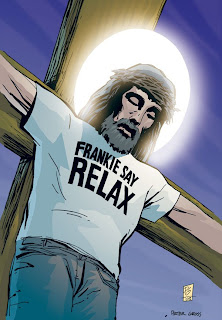 The bad: My main bone of contention is that what works for the story also works against it-it's played too straight until you get to the twist at the end. If the intention was to have it sedately amble along to make the  reveal more dramatic, I don't think it really worked. The problem is you get the story from the blurb- kid is second coming of Christ, kid performs few miracles, local community enthralled. By the time I got to the twist at the end, I just went 'well, huh' (I do that). At no point did the narrative really grip me. I suppose on the one hand, you could congratulate Millar for keeping it restrained and real, but the story just isn't strong enough to support this approach. The inclusion of the dis-believing priest-who-lacks-faith-only-to-re-discover-it-via-miracle is too cliched, even when given a faintly wry, ironic dimension once you look at it again after having got to the revelation at the end. One of the smaller issues which was a bit grating was Jodie developing super-intelligence- one of Jesus' more well-known 'powers'. The turn of events towards the close of the book felt a bit like a sellout as it completely changes the premise of the original story, which  was promising. Unfortunately, nothing of real interest is done with it. To sum up, it's readable but forgettable.