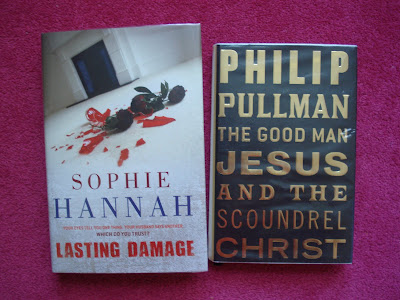 Books I'm trying to get through at the moment: Lasting Damage by Sophie Hannah, The Good Man Jesus and the Scoundrel Christ by Philip Pullman. Been meaning to read this for a while, the reviews were very mixed, curious to see the slant on it after the atheistic tome that was His Dark Materials.

Winter's Bone by Daniel Woodrell- I haven't seen the film which is supposed to be brilliant, but came across this when discharging a customer's books and thought it sounded interesting and so it came home with me. A Kind Man by Susan Hill: I've been meaning to get round to reading Susan Hill for a while, she writes a crime series as well as writing some very good novels. Oscar and Lucinda by Peter Carey: no idea why I'm reading this. I read My Life as a Fake at uni and hated it. On page and still nothing has happened. Most likely I'm a philistine and all the proper writing is going right over my head. 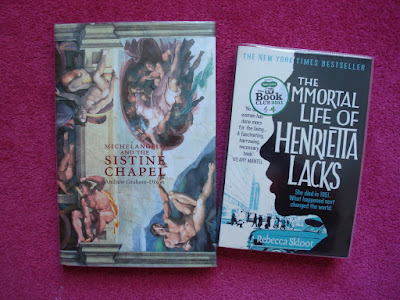 Michelangelo and the Sistine Chapel by Andrew Graham-Dixon and The Immortal Life of Henrietta Lacks by Rebecca Skoot. I'm trying to read more non-fiction because it's a good thing right? I mean you learn stuff and all that. Possibly you know that perhaps the genre and you are not best suited when you've read 73 pages on Michelangelo and the only thing you've learnt is that the fourth Teenage Ninja Mutant Turtle was named after Mike's teacher, Donatello. 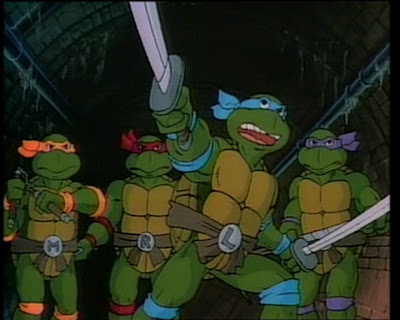 I mean, I know who Raphael, Michelangelo and Leonardo were named after -I'm not a COMPLETE imbecile- but now I know who Don is named after I feel complete. And finally: 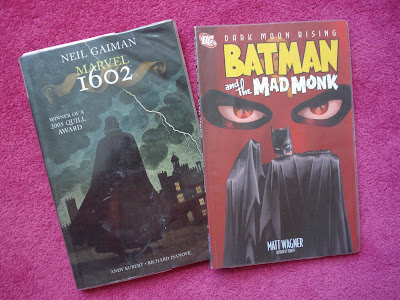 Neil Gaiman's Marvel 1602 and Batman and the Mad Monk. The comics I have finished reading obviously. 1602 basically has all the Marvel superheroes re-imagined as 'witch-breeds' in Elizabethan times. While I love Gaiman, I don't think this works as fully if you have no prior knowledge of the Marvel-verse and it's characters, although it's still a solid story. Slightly let down by the Batman book, this is set straight after Batman: Year Two and has Bats dealing with a series of murders which appear to have been committed by a vampire. Some nice Gordon/Bats moments and background, but that's about it.
Posted by Zainab at 19:18