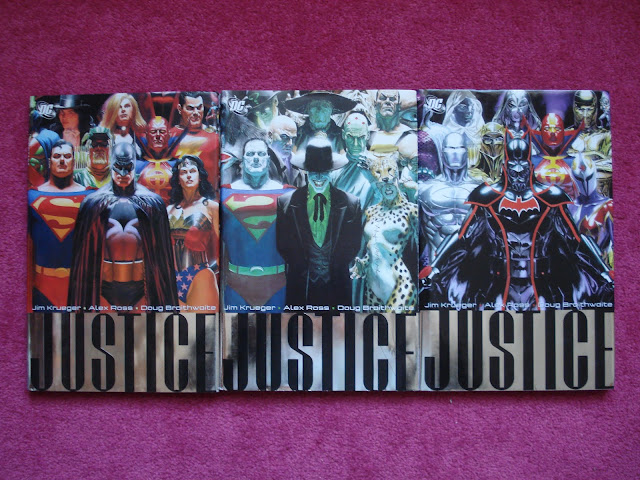 Recently I have decided I must branch out my reading of superhero comics to include characters other than Batman. The thought of going cold turkey terrifies me a little, so I've decided to begin with a foray into JLA titles in which Bats is still present. I got given the final volume of Justice a couple of months back and decided it sounded interesting enough to merit buying the preceding volumes. Two weeks of scouring Ebay later, I had the whole set in my clammy hands. First of all, I must admit I am not Alex Ross's hugest fan. While I can acknowledge his talent and the time, effort and skill required to produce such art, I don't know whether I think it's best suited to the medium of comics. Having said that, I feel with Justice, they were going for an epic story, and his art certainly contributes to the feel of this.

The plot: All over the world, the JLA's greatest foes are experiencing the same dream: a vision which shows the demise of the universe's superheroes. Seemingly moved by this premonition, Luthor, Bizarro, the Joker, Riddler and others join forces to offer the world an alternative solution. Why is it, they ask, that with all the combined powers and abilities at the JLA's disposal, there is still the existence of poverty and famine and disease? We have joined together, they say, to offer you a cure for your diseases and a chance to begin life anew.
Needless to say things aren't as straightforward as they appear. As people around the globe are magically cured of cancer, paralysis and disease, the apparently reformed villains begin housing them in eight glorious new cities of their own creation. Even whilst Superman is furrowing his brow in suspicion and Batman is gathering his investigative wits, the members of the JLA are attacked one by one, individually incapacitated and unable to contact one another, leaving the world to assume that they have no response to the new alliance's challenge.
The good: This is a great story, very well written. Although a JLA title, ostensibly it's about two people- Green Lantern and Batman.The page where Hal escapes from his space prison:

When you come to this bit in the story, you can hear the music rising to a crescendo and peaking at the page above. So Alex Ross must be doing something right. Green Lantern's incarceration and subsequent breakout are vital to the story. I've not read any Green Lantern stories, but I've ordered 'Rebirth'  as a direct influence of his role here. Although Bats is more of an orchestrator here, it seems members of the JLA are as obsessed with him as I am, constantly worrying about what he will think. Or maybe I'm projecting. Also good- the Joker as a zealous preacher. You know some things you see and wonder why they haven't been done before as they just seem right? This was one of them.
The bad: The only criticism I have of this is the point of view narration. It switches between a lot of characters whilst there are many characters in the frame, so it can take a while to work out who is speaking. Also it is just me or does Batman's armour look decidedly feminine? 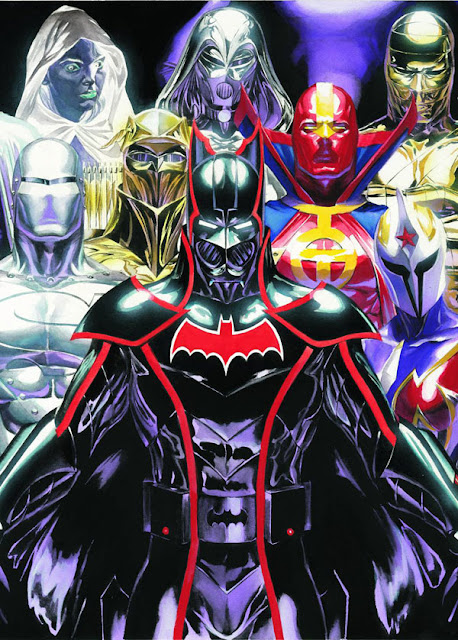