The hour of our release. . . draws near? 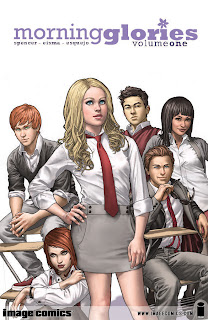 
Okay. Gathering thoughts. Which is difficult to do when you don't have many. I'm pretty slow so I was quite confused by this book. When I tentatively told Imran I would be a doing a review on it, he texted me 'Morning Glories is really good!' I don't know what this means or how it's relevant, but hey. So let's see what we have:
Plot: A group of six teenagers begin school at the prestigious Morning Glory Academy. We are led to believe that each of them has certain abilities, apparently unknown to them, and that these are the basis for their selection. Upon arrival, one of the girls calls her parents to assure them of her safe journey, only to discover that they no longer remember who she is and deny that they have ever had a daughter. This triggers a chain of events that leads the group of students to realise they are imprisoned at the academy for reasons unbeknownst to them. 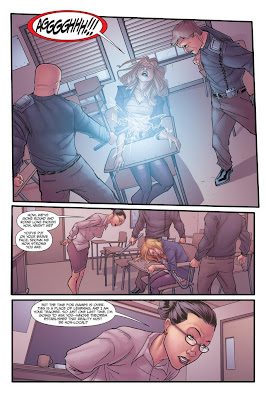 So they do the student thing and revolt, or attempt to, which leads to torture, psyche-breaking conditioning, attempted lobotomies, you know the drill. Towards the end of this volume, apart from having discovered what appears to be a metal energy vortex, shaven-headed crazies in the basement, recurring Lost-style cryptic messages, Death-Eater types, nobody is any the wiser as to the motive of the imprisonment.
The bad: It may just be because it's the opening volume, but there's a lot going on here, with the many narrative threads and the multiple genre referencing and it can get convuluted. Apart from Casey, upon whom the narrative focuses, and Ike, who is deliciously sociopathic, I didn't really feel that invested in any of the characters. I felt this was a problem that extended to the art to some extent; at times I was unable to distinguish between the characters and found myself remembering them by the colour of their hair or some other feature.

Again, it may just be first volume syndrome, but you don't really get any answers towards the end. The kids are gifted, but we don't know how: super-powers, mental ability? The school has the children, but no hints as to towards what purpose. It may have been better for the um, challenged people like myself if we were given some hint about what the hell is going on. 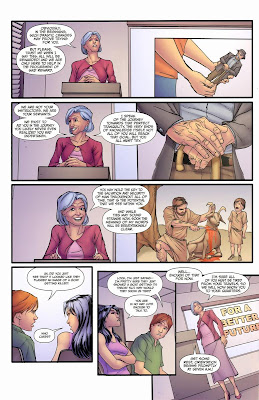 The good: Despite it's incorporation of genre conventions- locked house, evil tormenters, crazy scientists, Big Brother types, to name but a few, it somehow still manages to be something fresh and has the potential to be very good. It has some strong scenes and dialogue and definitley leaves you wanting to know what happens next. Should be interesting to see how all the different strands come together.