The Stuff of Legend: The Dark 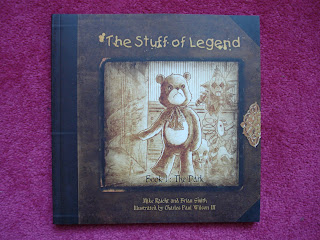 
You know when you're on Amazon and you click on some suggestion or recommendation and then another and then another and before you know it, youve clicked yourself (and your credit card) into oblivion? This happens to me a lot. It was on one of these trippy, clicking journey that I came across The Stuff of Legend. When I'm deciding whether to buy a book on Amazon, I try to read as little as possible about it. On a lot of the pages you can pretty much read the whole story on there, which for me defeats the purpose of then buying the book. If the bare basics grab me, I'll buy it and then see if it's good or bad.
The plot: It's 1942 and its evening in Brooklyn, where a young boy lies sleeping in his bed with his pet dog nearby. Suddenly the dog begins barking and as the boy leans over to hush him, inky black tentacles shoot out of the wardrobe and wind themselves around all his body, pulling him into the dark realm within. His toys, bound by the code of remaining inanimate around humans, watch on powerlessly. Once the dark has swallowed him up, they huddle around to discuss what to do. It's eventually decided that a small group of them will venture into the Boogeyman's lands to attempt to rescue the boy. Along the way they discover things about each other and themselves, suffer losses, all the while unaware of a betrayer amongst their ranks. 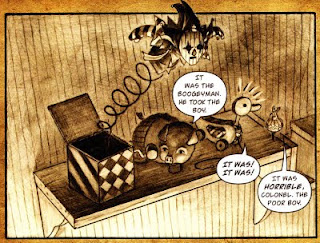 The good: The characterisation of the toys is great, the attributions of each toy just seem so fitting. This works especially well when the toys cross into the Boogeyman's land and find they have become changed- Max the teddybear becomes a real grizzly, the type you wouldn't want to cross, Jack-in-the box becomes a spindly clown with a very elaborate way of speaking (for some reason I imagine him with a posh British dandy accent) and Quakers the wooden duck who finds he can fly ('I'm a real duck!'). This is where the art also comes into play as you can really see the difference in the characters before and after their transformations whilst still recognising them and their personalities. While I'm a huge fan of colour art, the yellowed sepia-tone used here is in accordance with the flashback story feel I think the authors were going for.
There's definite references to Alice In Wonderland, particularly in the scenes where they stumble across a town where all the toys are involved in a bizarre never-ending game which no-one ever or seems to win or know the rules to, and in which they become inadvertently engaged after stepping onto the board. It's also pleasing to have a villian who is genuniely frightening (reminiscent in looks of Mr Dark in Fables)- the Boogeyman is a swirling black organic mass who has filled his land with toys whose fears of abandonment and loneliness he has preyed on. 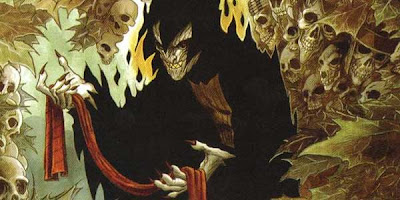 The bad: I can't really think of any outstanding criticisms to be honest. I don't know whether the authors of this intend to make this an ongoing series (which would be great if they could sustain the story for that long) or just a two-parter, but this is a fantatstic first volume- well written, poignant and with depth -and I will certainly be picking up the next book.