Where stuff confuses me

I'm a huge Batman fan. I don't know whether this came about by way of sampling and rejecting other supes, but my love for the Bats is pretty much supreme. About 6 weeks ago, I was chuntering about the fact that I hadn't read a Batman book in a while, so I went online to search for Batman trades worth reading which I didn't already own.
As nothing is worth doing if you're not going to overdo it, I ended up buying *deep breath* No Man's Land vols 1, 2, 3, 4, 5, New Gotham: Evolution, Secrets, A Lonely Place of Dying, Going Sane, The Last Arkham, Black and White vols 1 and 2, Ego and other Tails and Batman: The Collected Adventures 1 and 2. Don't look at me like that. 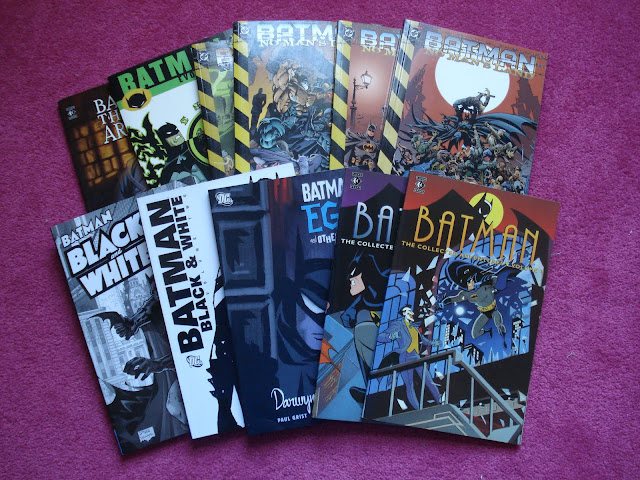 When I was in the throes of above spree, I was wholly committed to the idea that as a proper Batman fan, I really should own all the trade titles (I don't like collecting issues). However, problems have risen. Yeah. . .didn't see that coming. The thing is, some of them are just not very good. The second thing is I do not like 50's style art. Do not like. Possibly hate. I find myself unable to read a story if the art is in that style. I know it's of a particular era and a distinct style which some consider kitsch or cool, but I just can't get into it. Which brings us to the third thing: I can't keep books I don't like on my shelves. Call it a quirk or whatever, but if I really don't like a book, it needles me to see it taking up space on my shelf, which could be inhabited by a good book (especially since my Dad rejected my floor-to-ceiling shelving idea. Thanks Dad). If I can find one decent thing about a book I'll keep it. I was going to get rid of Batman vs Robin until I got to the pages in the end and saw all the different logos with their various colour combinations, which I thought were amazing and kept it solely for that.
And so I have come to the conclsuion I am not a completist. Does this make me a bad fan? I don't know. Anyhow, as much as I love yonder pointy eared dude, the following are moving on to pastures anew (read Ebay)-
A Lonely Place of Dying: which internet people said was good and IT WASN'T. My own fault for believing them. Not only did it have the bad art ( which is what I shall now refer to it as, much like the bad colour in The Village), it also had the bad dialogue (is it me or am i starting to sound French?). This is allegedly a treatise on the the pro's and con's of Robin's existence, but it failed to convince me.  I like Tim Drake, I think he's a really solid character, but his introduction here seemed mainly to consist of him  annoyingly popping up everywhere and plaintively bleating  'Batman needs a Robin!' which does not a story maketh. Eventually Bats is so fed up of him he just caves. Although I did love the way Dick and Alfred were really suspicious of Tim, you could just see they didn't want to let him join their little secret gang.
Batman: The Last Arkham: I get it. Batman is mentally finely balanced. He is haunted by haunting demons. He tippy toes the line of psychosis. Any moment he could tip over the edge. Or has he already? Or hasn't he? Or has he? I know I'm really simplifying here but I'm just a wee bit sick of these kind of stories, especially when they don't have anything particularly new to add. Also, it had the bad art.
New Gotham: Evolution: Utter crap. Seriously, words fail me. I really enjoyed No Man's Land, even if the pacing was a bit off and it was 2 volumes too long, and was expecting good things from this follow up story. Incoherent and unnecessary. Utter tripe.
Having vented above rant, I must admit I have been contemplating buying Batman and Robin Reborn again. I sold it because I was that disgusted with it. The art was fine, Frank Quitely = love, Grant Morrison = not. But I have the second volume and intend to get the third and now I feel I should have the first.
Yeah. . . I'm going to go now.
Posted by Zainab at 14:11