I'm not a fan of manga. The form has blown up massively in the last few years so there's no escaping it if you're a fan of comics. Ive tried various titles- Fruits Basket, Naruto, Bleach, Case Closed, Ouran High School and others. My problem with manga is the whole 'huge eyes and head with absurdly disproportionate nose and eyes' style. I can't read a book if the art is in a style I find distracting or, you know, disturbing. I did some slap-dash research before writing this post to see if this style is a defining characteristic of manga and from what I could gather, it isn't. It's just a very popular and predominant style in whcih manga is drawn.
While it may just be my exceptional denseness coming to the fore, when reading manga in this cutsie affected style, I honestly cannot tell the difference in expression, gender or age and therefore character. I realise some of this is intentional, but it's not really conducive when attempting to follow a narrative. Apart from the art, I dislike the soap-operatic nature of many titles- the long, overdrawn stroylines lend themselves to weak plot and charcterisation. 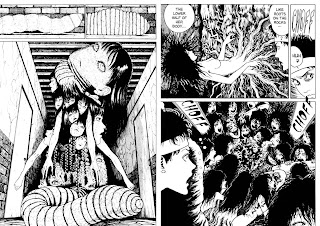 I love reading so I continue to persevere with manga; the sheer number of books out there must mean there's something I can get into. So if I'm at work or in a bookshop, I like to go and flip through some books. I ended up buying a book called House of Terror Museum: Tomie. I'm not a peruser of horror as a genre in films or books, but it was one of the main reasons I enjoyed this book. It reads like a good Japanese horror film. It contains 9 stories about a girl called Tomie who is murdered on a class trip but turns up alive and well at school a week later. Tomie has something about her that leads to people killing her over and over, and yet over and over she returns.

It's a really solid book- the characters are drawn out well and the stories have genuine scares. I was happy with the art too- you can tell when a character's angry, confused, indecisive. It also goes a way to adding towards the atmosphere, creating tension and dread. I'm not saying I'm going to rush out and buy manga in bulk, but it was the first manga book I enjoyed. So, hope :)