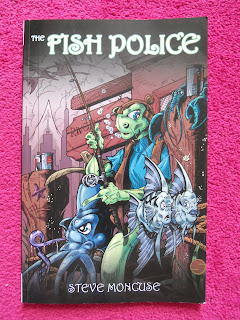 Ok, so I feel absolutely terrible. A while back I was reading the Forbidden Planet Blog and came across Richard's (who I think I've mentioned is my favourite contributor over there) write up of a comic called The Fish Police. Having read the book when he was younger, he found it didn't quite measure up to his memories of it. So he  put out an offer-  he would post out the book to anyone who would like to read it- with fresh eyes- in exchange for a couple of paragraphs of their thoughts. So of course I offered- free book, animals, fish, criminal elements, humour- it all sounded interesting.
However, in between Ramadhan, the new job and other such minutae, it's taken me some time to assemble and put down said thoughts, so I'd like to sincerely apologise to Richard for that. But here goes-
For me, a comic is more about art than writing- it's primarily a visual medium. I don't mean at all that the writing isn't important, just that I can plough through a comic with poor writing, but not one with poor art. And that's purely subjective. It did, however, cause a problem with the Fish Police. With anthropmorphic art, there's usually two ways to go- you can give animals humanistic limbs and have them walk upright, a la Blacksad, or you leave them au naturel. In the Fish Police it's an awkward combination of the two, with the fish hobbling upright on their tils looking unbalanced and strange. Gill's top half looks too big for his lower half to support, and at times the bottom half appears curiously static and unmoving, as if it's detached from the rest of him: 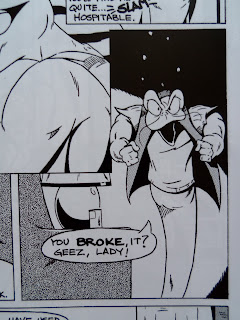 It just looks spacially wrong. It doesn't help that they've been given what only appear to be, um, defined buttocks. I'm sure fish have muscles in their tails, but the prominent incorporation of a primate feature only serves to highlight the unsubstantial and preacriously balanced tail it tapers down into.
Which brings me to the octopus. Why, if the fish are upright, is the octopus lying flat? Yes, it's an invertebrate, but why not have him floating, he is underwater after all. There are ways in which to use an animal's associated characteristics and representaions-for example, in Blacksad, a fox is a young journalist who acts as an informant, a bespectacled Alasation is the chief of police-small touches which help to elevate the narrative. It's possible that his horizantal-ness is an attempt to characterise him as a slimy, ink-exuding, mincing type, but the writing isn't strong enough to support such assumptions. It's strange that nothing is made of the underwater setting- you've got the whole wonder of the ocean world to subvert to your will, but it's just pure background here. 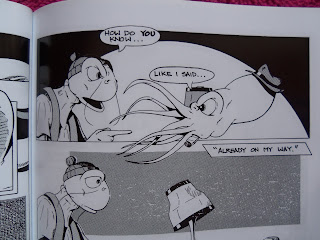 The story sounds quite promising. Gill is a detective with the fish police, investigating a drugs case in which he has a particular interest as he seems to be getting repressed flashbacks from a time when he used to walk on two legs. He believes the drug may be the catalyst that triggers the transformation from man to fish and vice versa. Accepted it's a first volume, but for the story to have been involving, there would have to be more focus on the apsect that is most interesting and sets it apart- the whole man/fish past life transformation. Instead you get a few panels in which Gill mentions possibly having a cat (the horror!) etc, and that's it.  The rest is just Gill attempting to get to the elsuive drugs baron and his dodgy organsiation whilst going through every hammy cop/baddies/spy cliche. And not in a so-bad-it's good way. There's nothing wrong with genre conventions, but if they're not done well, or given an added dimension, the story is going to fall flat.
I think it's obvious The Fish Police hasn't aged well- it came out in 1987, the year I was born(!) - and it shows. The humor and the charcterisation is dated and it suffers in comparision to newer comics which feature animal detectives- Beasts of Burden, Blacksad and Good Dog, Bad Dog which is more of it's vein. I feel a tiny bit bad for decimating a childhood favorite of Richard's, so all I can say is, read Dave Shelton's Good Dog, Bad Dog, Richard, it should make you feel warm and fuzzy again!
Posted by Zainab at 15:41