Leviathan by Ian Edginton and D'Israeli

Hip, hip the fuck hooray! Honestly, it's been a while since I read a really good book. Something that when you finish, you close the book with a satsified feeling and go 'wow'. Although recently this has changed, with quite a few books really impressing me (which is important to do if you're a book. Or an author. Or an illustrator.). The first of which I'd like to randomly ramble about is Leviathan, written by Ian Edginton and illustrated by D'Israeli. First, the cover which I love (and on which I have only just noticed all those little ghosty octopusy things): 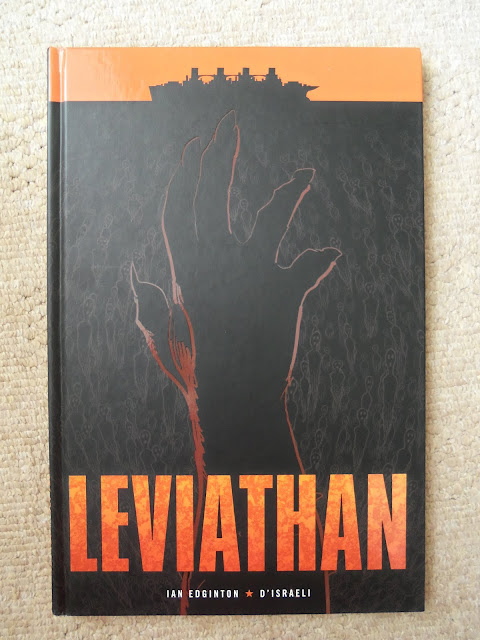 Leviathan is the name of a monster cruise liner a mile long and half a mile wide, that sets sail from England, destination New York, in 1928 with 30,000 people on board, only to never arrive. The book opens 20 years on from the ship's launch, with the double suicide of a now elderly couple. For twenty years, the ship has been drifting in unknown seas, and having hoped and prayed for an answer like many others before them, the couple have chosen to finally end their ordeal. It's the murder of a passenger in the upper ecehelons of the ship, however, that propels events into motion. Summoned from the middle-class section of the ship, Detective Sergeant Lament is asked to investigate the killing. Initially he refuses to do so, citing the unique social culture that has developed on the ship -particularly below deck- as a reason. He fails to see what makes a murder in first class so important when there are at least 4 people killed each week in steerage. 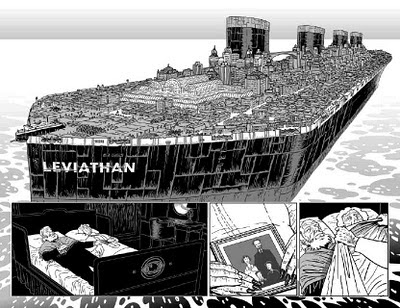 His interest is piqued when the Captain tells him the body has been flayed- the modus operandi of the 'Stokers'- the ship's rumored bogeymen, who can walk on ceilings and walls, with great long amphibious tongues wrapped around their heads. He's further intrigued when the Captain tells him that the ship has had no word from the engine rooms in over five years, with all the men dispatched to investigate never to return. Furthermore, although the engines providing the ship with heat, light and power, the Leviathan should have run out of fuel years ago. So he begins the journey down into the bowels of the ship, where he first has to get past the pit fights, brothels and scavenging of those 'below deck' who, apart from being sent rations of food from up above, have been left to fend  for themselves and have suffered a complete social breakdown. 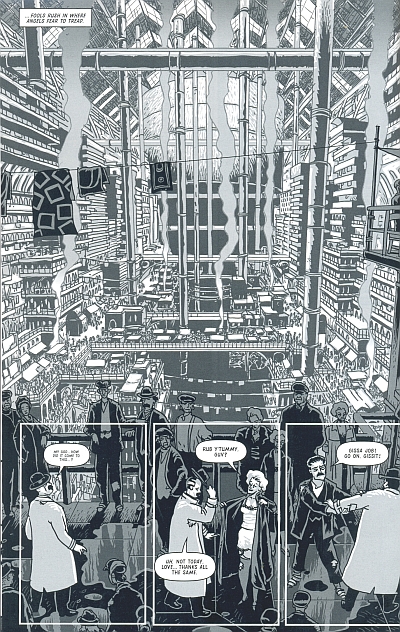 It's a genuinely fantastic book and D'Israeli's art is a big contributing factor. I've said it many a time- I don't like black and white art- for me, the whole point of a comic is pictures and the whole point of pictures is colour, but I cannot imagine this book in colour. The black and white works to reflect the state of limbo which the Leviathan is in, and gives it a tone of menace, where I feel colour would have made it seem more alive and less serious somehow. D'Israelis drawings of the ship really give you a sense of the magnitude and scope of the liner and when you follow Lament into the murky depths of the ship, the closeness and heat and ferality reek off the page (and I'm not one to get romantic about stuff like that).

Yes, I wish it could have been longer, but only because it was so good I didn't want it to end. The quality of the art and writing and the whole concept deserved to be explored further. But mustn't complain! The best book I've read in a long while and not at all expensive. Get it.
Posted by Zainab at 10:39