Yesterday, I contributed to a Kickstarter project for the first time and it felt pretty good. For the uninitiated, Kickstarter is a creative funding site, where creators put up details of a project they would like to start but haven't the financial backing or resources to do so. The creator puts up the total amount of money required to get the project up and running, and interested parties can then pledge various amounts of money in return for the finished product and other returns (signed copies, skethes, original artwork). The target amount has to be met by a certain date and your money is only taken if the target is hit. People often put up a lot of pictures and information, so you get a good idea of what it is you're paying for. It's a simple and effective idea.


The book I've backed is Jake Parker's The Antler Boy and other stories. 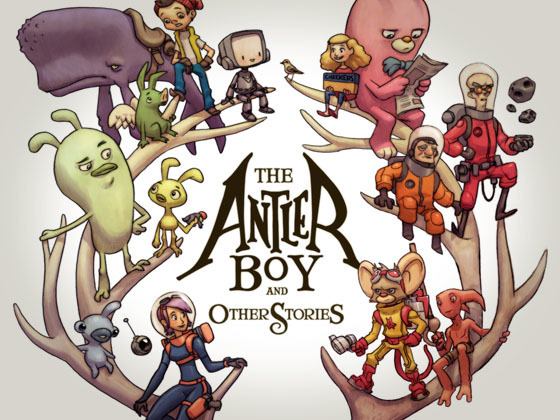 Most of these stories have been published in anthologies such as Flight and others (some which are out of print), but this is the first time they're being collected in one place. The book is going to be approximately 150 pages, in hardback, full colour and with a sketchbook and notes section and a signed copy will cost you $25- $35 for those outside the US. Jake's put up artwork and short sypnosis' for some of the stories included in the book-

Hugo Earhart - 'One of the first comic stories I did. It's about a boy taking on responsibilities that are a bit over his head and his rising to the task and proving himself worthy. It’s got a flying whale and cool airships; what more could you want?'

Missile Mouse: The Guardian Prophecy - 'Missile Mouse crash lands on a planet to find he's just the guy to help save a small village from a monster...or is he?'

The Star Thrower - 'My irreverent take on the inspirational story of the same name.'

Checkers - 'A story about a girl who just wants to play a game of checkers.'

You can pledge here- http://www.kickstarter.com/projects/jakeparker/the-antler-boy-and-other-stories Funding ends May 16th.
Posted by Zainab at 10:03