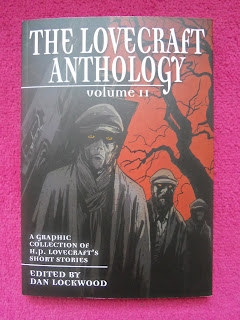 When I picked up The Lovecraft Anthology early last year I was really impressed- the stories felt fresh, were distinct and self-contained, and the artwork was varied and impressive. Comic anthologies often have a problem of great, jarring shifts in quality and tone but these adaptations of H. P. Lovecraft's short stories were consistent and well-crafted. Obviously I wasn't alone in ejoying the book, as a second volume, also to be edited by Dan Lockwood, was announced. A measure of how highly I rated the first book was that I pre-ordered this second and perhaps my heightened expectations were a factor in  being disappointed in the latter.

I should start by saying I've never read any of HP Lovecraft's original work. My exposure to it has been limited to the comic/graphic form. Whilst I don't think that affects the reading of this book, it's possible that the choice material was included in the first anthology and this second suffers from slimmer pickings. Adaptations are a tricky combination of whittling down pertinent prose and choosing what to depict via the art, a balance which is only rarely acheived here. What the first book did so well was to combine separate writing/drawing/colouring talents with the source material, making each story indivdual in tone and character, whilst still clearly bearing the Lovecraft stamp. Here the stories take too long to set up and are lost in the prose, making them feel rushed and unfinished. The art rarely combines to elevate the narrative and frankly, none are easily remembered- I had to go back to the book to pick out what I felt were the better ones.

The two stories that really stood out were 'The Temple' adapted by Chris Lackey and illustrated by Adrain Salmon and 'The Statement of Randolph Carter' adapted by Dan Lockwood and illustrated by Warwick Johnson Cadwell. Both benefit from superior artistic contributions- Chris Lackey's colour-blocking, geometric style echoes 40's propaganda poster art, fitting with the story perfectly: 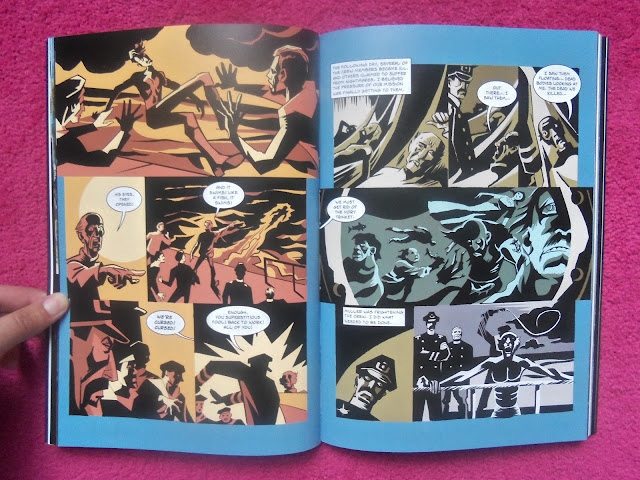 I've been a fan of Warwick Johnson Cadwell's art since I read Nelson- his cartoony line drawings add character and humour without being overly whimsical. His 6-page closing contribution here was the highlight of this book. 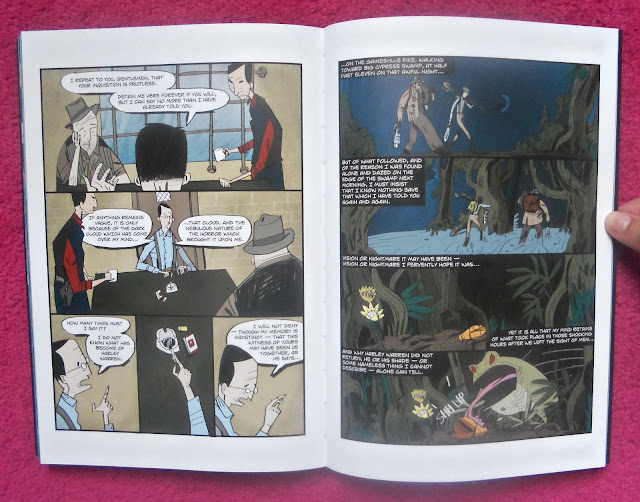 Other stories that don't fare too badly are 'The Nameless City', adapted by Pat Mills and illustrated by Attila Futaki and 'He' adapted by Dwight MacPherson and illustrated by Paul Peart-Smith. Overall, if I had had the opportunity to browse through this in a book-store, the law of diminishing returns dictates that I wouldn't have bought it- it's much more miss than hit.