The Adventures of Leeroy and Popo 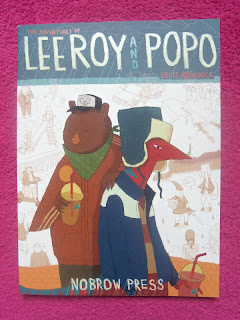 There's not a great deal to be said about The Adventures of Leeroy and Popo. It's not the kind of story that has cliffhangers or action and intrigue, but it lacks any points of interest and the characters aren't deveoped enough to make you care about them.  I always tend to be more favourable towards a comic if the art is good and the writing/story not as much, as I feel a mediocre narrative can be lifted by strong illustration in a way that doesn't work as well the other way round. It doesn't really work here. There's nothing greatly wrong, as such, with Leeroy and Popo: it's just all a bit insubstantial. Published by Nobrow as part of their Serial Box line and written and illustrated by Louis Roskosch, it follows the eponymous title characters as they play video-games, chat to each other on facebook and visit the local cafe.

The closest we get to anything of significance occurring is Leeroy's ineffective attempted wooing of a waitress at the cafe, but that too, fails to engage. It may be that the lack of substance reflects the nature of the friends' existence, but it's not a particularly meaningful or interesting existence. Louis Roskoschit's colourful, quasi-adolescent art has a scratchy, shaky appeal, but the story and dialogue feel flat and could do with an injection of dynamsim.

At 52 pages, it may be short, but that's more than enough space in which to create something absorbing and worthy of attention. There are books in which nothing much happens, yet by providing a snapshot or glimpse of an event or life, are indicative of insight into a larger condition: some manage to be uplifting and some morose and existential- either way, they have something to say. This has neither a message  nor enough nous to be entertaining, falling instead into the indifferent chasm in between.

You can buy The Adventures of Leeroy and Popo here 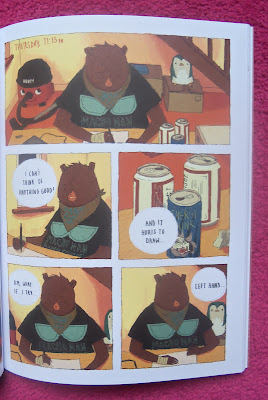 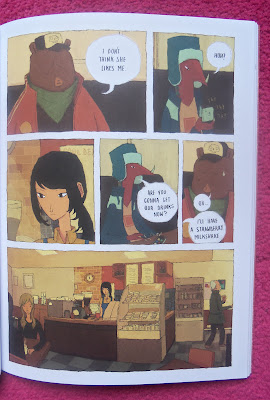