Excellent, excellent news if you're a fan of Kazu Kibuishi or just great comics in general. I got to know Kazu's work through his super Amulet series and have been wanting to get my hands on a copy of one of his earlier works Daisy Kutter: The Last Train for some time. However it only ever had one printing as a graphic novel in 2005 and copies on Ebay and Amazon are priced in the £40 range. Although prices like that don't usually put me off if I REALLY want something (and Kazu's work is that good), I've not got round to getting a copy yet. Which is just as well, because all that preamble is a roundabout way of saying- Kazu's set up a Kickstarter to re-print Daisy Kutter! 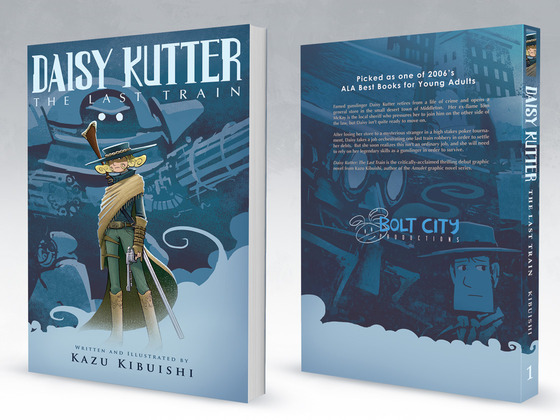 Obviously I'm not the only one who's grabbed the opportunity to buy this as the project has already been funded, which simply means it's definitely going to print. A copy of the 192 page book costs just $15, with $5 for shipping to the UK, which is pretty damn good. Kazu's also written he has the whole of a second Daisy book written, drawn and ready to go, so hopefully with the help of Kickstarter, we should be seeing that soon.

Here's the synopsis for the first book-

Daisy Kutter is a retired bank robber and legendary gunfighter who has decided to open a dry goods store in the small town of Middleton. The sheriff, her ex-boyfriend Tom McKay, tries to recruit her to join him on the other side of the law, but she isn't quite ready to move on.

When Daisy loses everything she owns in a high-stakes poker tournament, she is offered a job from the stranger who cleans her out at the table. He wants to hire her to rob his train. What's the catch? He believes his vaunted robotic security system will stop Daisy in her tracks, and he wants to prove it. If she succeeds in robbing the train, she can keep the gold and have her life back. . .

And some preview pages: You can find the Kickstarter here. If you've never read any Of Kazu's work before, I highly recommend the Amulet series. I believe there are some preview pages on Amazon- have a look, you won't be disappointed.
Posted by Zainab at 20:21