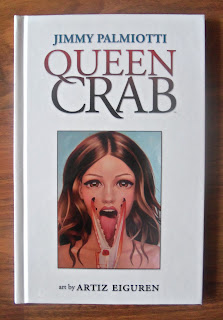 Reviewing books is difficult. Perhaps more so in comics where you have to assess how well the writing and art work in synergy, or whether one is at odds with the other in terms of quality. You have to try and find a balance between analysing something objectively and your reaction to it as a individual with subjective tastes. Having said that, when  a book hasn't worked for me, I try and not be too negative about it, keeping in mind that somebody has (hopefully) put in time and effort  to create it. So I'm just going to keep this simple and try and articulate why Queen Crab really didn't work for me on any level.


I buy all my books and I bought Queen Crab on the strength of the cover image by Sas Christian, and the blurb 'Meet Ginger, a twenty-something office girl that lives her life one boring day at a time - until on her wedding night, her new husband tries to kill her...and it goes horribly wrong! This is a story of revenge, lust, violence, and insanity'. There were also some references to David Lynch and Stephen King in there, but I left those out- it was just too embarrassing. It sounded fun and entertaining; I decided to give it a go.


Ginger is a bored girl in a boring job in a boring town. She's getting married to her boyfriend Murry, who she doesn't love greatly, but has a good job, appears steady and dependable and so what if they're both sleeping with other people. Murry and Ginger get married, go on honeymoon and just when Ginger is gazing out oceanwards, beginning to think things may work out, ol' Murry grabs her by the ankles and throws her overboard. She emerges an indefinite amount of time later, alive, but with crab pincers instead of arms. 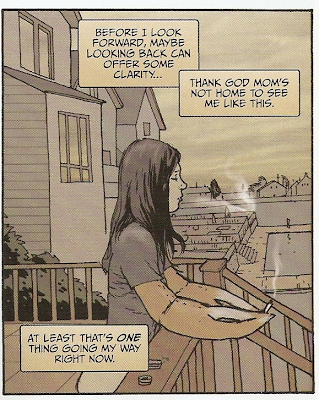 You can work out where the story goes from there and the way Ginger finds out Murry's reasons for wanting her dead are underwhelming. Could he not have just broken up with her instead? Joking aside, this reads more like an origin story- the problem being origin stories work best when the hero is either an established character and readers are learning how and why he became a certain way. Origin stories give a deeper insight into the character and their personality, but there's not enough character development here to provide that understanding. The only sense you get from Ginger is that she seems rather oblivious and apathetic as to what happens to her: she's marrying a man she doesn't love but she doesn't seem to mind, she's being sexually blackmailed by her boss at work, but she's accepting of it. There's no inference as to why she is this way and nothing to make you care about her or what happens to her.

And can we talk about the crab arms? 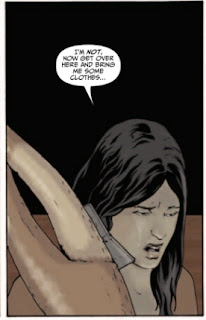 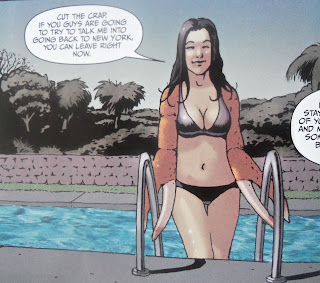 God knows comics have appendages ranging from the ridiculous to the sublime, but if you're going to give your character a chance to turn their life around with crab pincers, wouldn't it be best to have them well drawn, so they look vaguely organic. Or perhaps I'm missing the point and Ginger's unwieldy and uncomfortable crab arms represent her rubbish life, which she has to overcome by making the best use of. That may or may not be, but it doesn't make the pincers look any less awkward and immovable, and in pictures like the one above right, they don't even look like they're attached to her body. On top of this Artiz Eiguren's art is inconsistent, with Gingers features changing so she looks like a different person from one page to another.

The book closes with Ginger discovering she has other abilities, 'like Aquaman', and wanting to learn more about her 'gifts' and who/what bestowed them upon her. Unfortunately, it's a journey I won't be following.
Posted by Zainab at 12:01