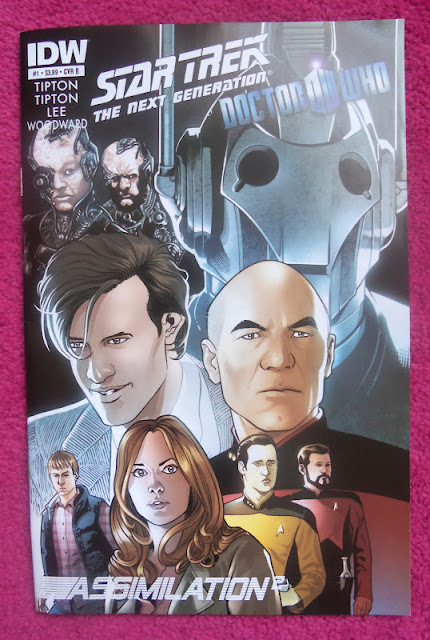 I bought my first ever comic issue today! I think that qualifies for an exclamation mark. I've read comics sporadically since I was a kid, and diligently in the past 3 or so years, but I always buy collected versions, trades or graphic novels. Comics don't take very long to read as it is, and the prospect of buying 20 or so pages worth of something and then having to wait 2 weeks, or more (if it's not delayed), to get the next 20 has very little appeal. Also, trades are generally both cheaper and sturdier.

When the Star Trek: The Next Generation and Doctor Who crossover was first announced, I had no intention of picking it up. As the release date drew near last week I was chatting about it to Suki at work, who is a huge fan of both franchises and I got caught up in all the enthusiasm and found myself pretty excited about it. I start work a little later on Wednesdays, so I popped into Travelling Man and bought two copies of it- one for myself and one to try and entice Suki to the dark realm of comics, even though he bought the digital version.

So. . .it was pretty great. The story begins with an invasion of one of the Federation planets by the Borg, and they're not alone: 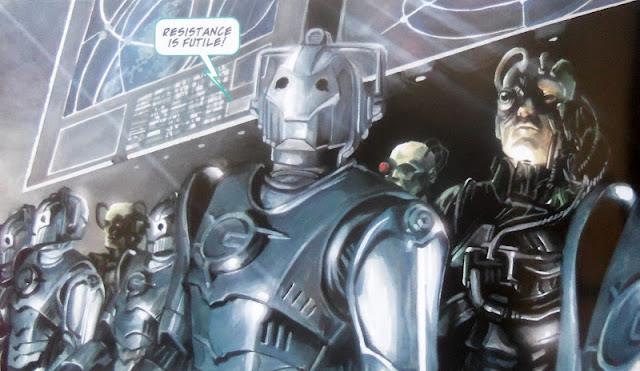 The invasion is fast and overpowering and the prime minister of Delta IV has no choice but to escape, with the hope that Star Fleet will arrive, intervene and save her people and home. Meanwhile, we jump to Ancient Egypt, where a familiar situation is playing out- the Doctor, Amy and Rory careening through the souks in a chariot being chased by guards. They manage to break their way into the Pharaoh's palace in classic hazardous, bumbling fashion, so that the Doctor can have a word with the Pharaoh's head advisor: 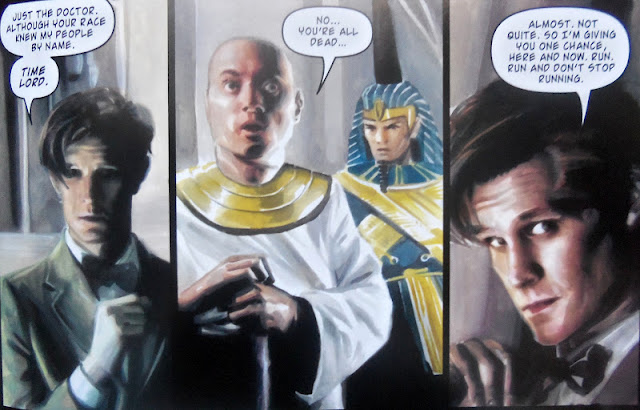 The dialogue and characterisation for the Who characters is spot on- you can hear them saying their lines, complete with individual intonation, stresses and quirks, but not being familiar with Star Trek or Who shouldn't prove a hindrance to enjoying this. Having sorted the Pharaoh's little problem, the trio set off in the Tardis again, where a bumpier than usual journey has the Ponds worried and the Doctor blase-ing it out. They land, seemingly, on Earth, in San Francisco in 1941, where everything appears to be normal. Until they walk into a bar and spot the android in the pin-striped suit. . .

I would definitely recommend picking this up- at 22 pages, there's a lot of set-up in this first issue, but it's nicely paced and never feels rushed. JJ Woodward's painted artwork looks great- he does a beautiful little space shuttles scene and has the Dr and Rory down pat, with only Amy looking a little ropey.

It's an 8 part series, releasing monthly, so I'm going to try and stick with the issues and blog about them as and when. Looking forward to the next one!
Posted by Zainab at 21:10