The Court of Owls: Batman's back 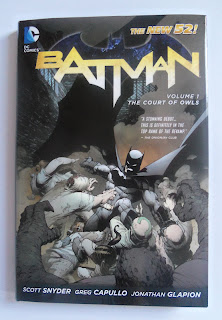 And so we come to the first Bat book out of DC'S new 52 stable (I like saying DC'S new 52 stable)- The Court of Owls. If there is one thing Batman plots have taught us over the years, it's that Gotham has a lot of old, secret societies and Bruce has a lot of old, childhood friends with an alarming penchant for turning into villains or turning dead. The Court of Owls begins, as these things often do, with a series of murders, which leads  to a sight now infrequently seen: Bats in detective mode. Paul Tobin commented recently on the difficulty of writing true follow-dem-clues detective stories in comics and whilst I don't concur with all his points, it is true of Batman, 'the world's greatest detective', that we rarely get to see that side of him anymore. It's gratifying to see Scott Snyder return to the bread and butter of the character.

Returning to the plot, the GCPD and Batman find a common modus operandi at the crime scenes is the recurring emblem of an owl, leading people to wonder whether Gotham's fabled shadowy Owls society is behind the killings. Bats is dismissive of this avenue of thought, reluctant to connect the murders to what he perceives as a boogeyman that Gothamites use to scare their children with. But, as Alfred dryly points out, the Batman himself was once the stuff of myth and lore, yet he is very much real. An attack on Bruce Wayne by the Talon, the Owls' designated assassin, forces him to re-think his stance and investigate further. This leads him to the discovery of various Owl strongholds dotted around the city and eventually into a trap where he must gather all of his famous resolve if he is to ever escape.

There are a lot of things to enjoy in The Court of Owls for both old readers and new. It doesn't exceptionally feel like a re-boot, which is good news for fans who may have feared drastic upheaval. At the same time, it should be relatively easy to follow for newcomers; although Dick, Tim, and Damian all make appearances, their involvement (with the slight exception of Dick) is kept to a minimum, avoiding confusion and allowing this to be a story centring on Batman. It's the better for it- this is not dark and gritty Batman, it's a more assured man going about his business- operating the day job, the night job and the family fairly consummately.

There's humour too: the opening with Bats having a kow-tow in Arkham Asylum, gives a brief glimpse of some of Batman's famous villains and the surreal, amusing site of the Joker fighting alongside his nemesis. You also have the easy banter between the sacred square of Bat-relationships: Gordan, Dick, Alfred and Bruce. There's a lovely little inter-change between Dick and Alfred where they talk about how much sleeping drugs Alfred has slipped into Bruce's drink (apparently he has built a resistance). And this panel put a big smile on my face: 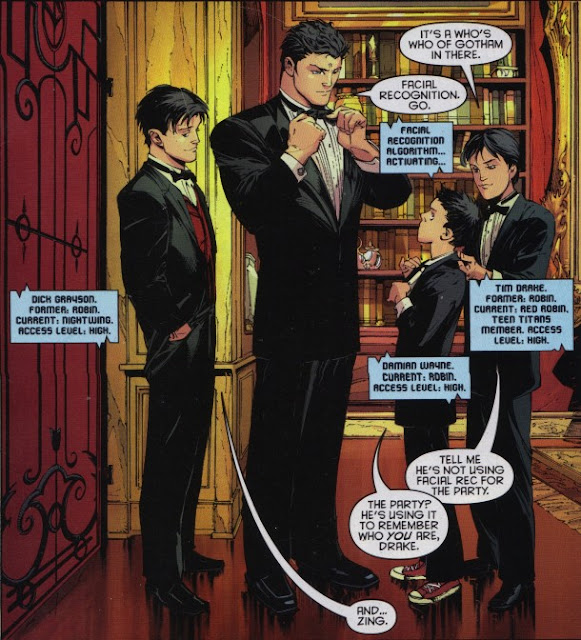 The panelling in this book really stood out to me. I can't claim to be hugely knowledgeable about the mechanics of comic making, but the various different techniques on display here impressed. It's most noticeable when Batman is trapped by the Court of Owls in a maze, with the rapid, shifting changes in panel size and direction doing a good job of reflecting his chaotic mental state. It's a refreshing way of addressing an otherwise staid plot point- the attempt to mentally break the Batman. It's also made more interesting by what remind me of 2001: A Space Odyssey references, with the seemingly endless stark white spaces  and the over sized art deco statues and frames.

Snyder describes his approach to Batman as 'steak and potatoes' and on the evidence of this, The Black Mirror and The Gates of Gotham, it's one that serves him well. The Court of Owls combines a lot of elements to deliver a  Batman story that triumphs on several levels and is intriguing, entertaining and engrossing. Read it. 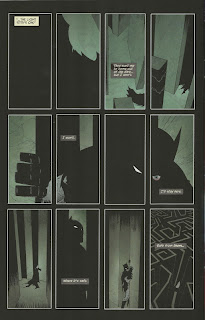 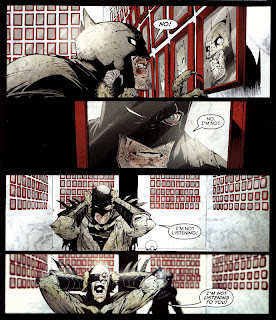