Pterodactyl Hunters in the Gilded City by Brendan Leach 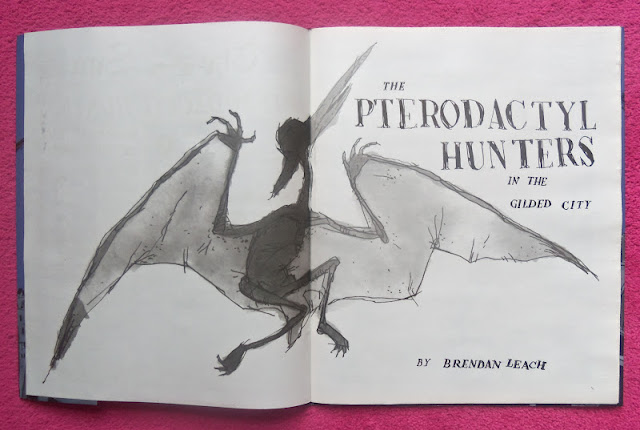 I'm a sucker for books that do something different with their book design. A recent article in The Guardian talked about how the rise of digital reading devices appears to have inspired publishers to a renewed focus on innovative and quality design for books and covers, thus offering people something an e-book can't. When the design has a strong idea behind it and is well done, it makes the book that much more special. Considering Pterodactyl Hunters in the Gilded city comes in at just under A3 dimensions and uses newsprint for paper, it was a slight given that I would buy it.  I honestly cannot imagine that you would get a similar experience of reading this in digital that you would in print.

Originally published without the stiff purple cardboard cover (which my copy has in these photographs) in a broadsheet newspaper format, the addition of the traditional cover is a smart decision. It takes nothing away from the striking design elements whilst helping to package and preserve the 'book' better. People are more likely to spend their money on something that looks sturdier and more like a book than the gimmick of a flimsy newspaper. 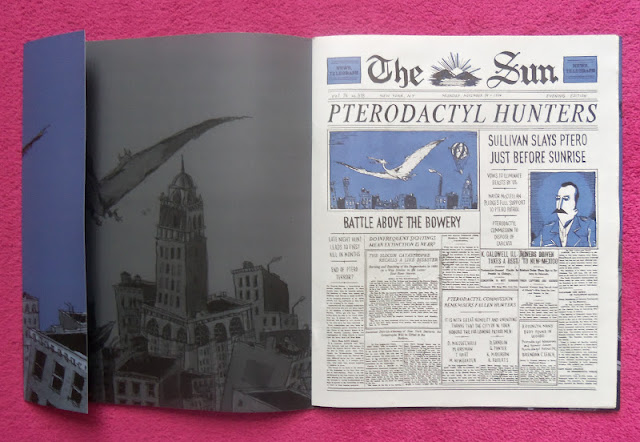 To give you more of an idea of the size of the book: 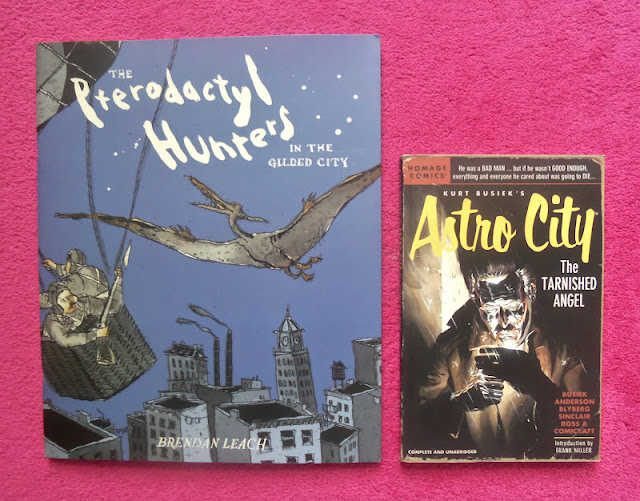 Set in 1904, in a New York where pterodactyls still exist and are considered a menace, it's the story of two brothers who work for the Pterodactyl Commission, an organisation whose job it is to ensure the birds are hunted down and killed. They do this by men taking to the skies in hot air balloons, while two spotters keep an eye out in the watchtower. Working for the commission has been a family tradition, a job which Eamon, the older sibling, relishes and one which sits uneasily with Declan. But as the press loudly celebrate the hunting of the final few pterodactyls, the brothers are faced with the ending of an era and thoughts of their uncertain futures. 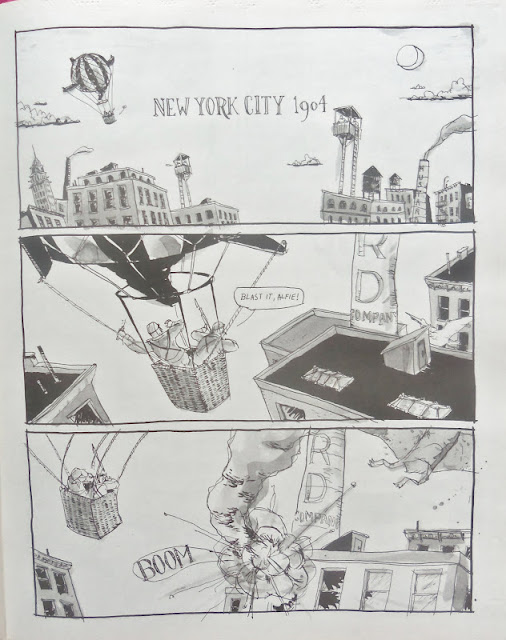 It's a lovely story that works on a few levels, dealing with sibling rivalry, family and having the courage to do your own thing even though you may not know what that may be. Declan, in his position up in the watchtower, has more time to reflect and think and is able to envision a future when there won't be a need for the Commission or them, and is attempting to plan accordingly. His sense of perspective allows him to realise the pterodactyls are representative of other frustrations, but Eamon, who has become a celebrity for his pursuits of the birds, can't really imagine a time when his job will be redundant and is focused on hunting as a solution to their problems. 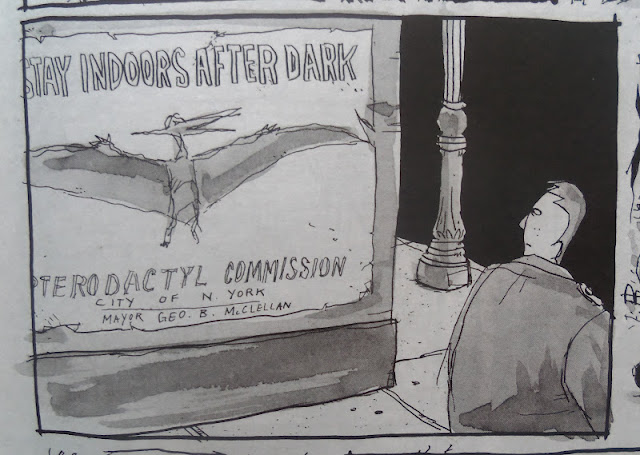 I've already banged on about the book design, but I have to stress that I think the large format really works here, because I read a review on Comic Book Resources which complained about the unwieldy nature of the book. I found it easy enough to hold(!) and in my opinion, it's the composition that adds an extra something to the story, giving the aerial sky-scape scenes a breadth and airiness that transports you above the roof tops. I love it  when people do something out of the ordinary with comics, it reminds me why I love the medium. Top marks to Brendan Leach.

You can buy Pterodactyl Hunters in the Gilded City from Top Shelf in digital and print here.
Posted by Zainab at 11:56