Oh happy day. Or week, should I say. I'm a noir crime and comic fan, so the release of the new Blacksad and Parker books was like both Eids come at once. I thought it would be nice to do a mini-review of both books in one post seeing as they're of the same genre, have absolutely gorgeous art and feature fast talking, hard-boiled, dance to my own rhythm types. Here we go:


Blacksad returns on a new case, this time with Weekly the journalist fox in fully-fledged side-kick mode. The pairing is good to see; Blacksad was getting a bit introspective for a while there and Weekly nicely offsets the darker edges of his personality. Whilst doing a piece on old music producer called Faust, who specialises in managing incarcerated musicians, Weekly is asked by him to enlist Blacksad's services. Dying of cancer, Faust wants Blacksad to find his hugely talented but drug addicted pianist, Sebastian, so he can say his final goodbyes. Needless to say this doesn't prove to be a straight-forward task.

The great thing about Blacksad stories is that they manage to incorporate serious issues with a bit of depth as well as being an entertaining genre read, without it ever feeling as if things have been shoe-horned in for the sake of weight or meaning. A Silent Hell is a story about fathers and sons (seem to be reading a few of those lately- just finished Jeff Lemire's Underwater Welder) and attempting to rectify the mistakes of ones past whilst living under the burden of it; the bid to escape and start afresh and the things that drag you back. I also like that Canales doesn't lead his finishes to your typical comic book denouement, he's able to resist flash flourishes and still deliver a satisfying conclusion.

I didn't think it possible, but Juanjo Guarnido's art has definitely gotten even more beautiful. He explains in the notes and sketches section at the end of the book how he's changed his watercolour painting technique. You can tell why it takes so long to produce a Blacksad comic, Guarnido doesn't scrimp on backgrounds, each page beautifully painted with so much to look at. I know I'm always banging on about anthropomorphic characterisation and design, but I just love to see it when its done well and the different ways in which it's interpreted. For example, the rooster in the page below: the way his comb is draped droopily over the side of his face and his wattles, making him look sinister and menacing- little interpretations like that. Or when Faust and his son are stood together on the yacht, Faust's face thin and drawn with long, tapering horns and the ram's face full and round with strong, elaborate coiled horns. By merely looking at them, you can read the story of age and personality of their characters.

So yes, Blacksad is still brilliant and if you haven't bought your copy yet, I declare you a fool. 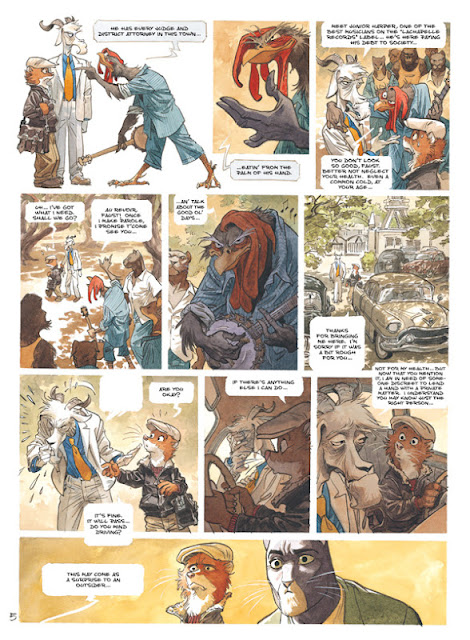 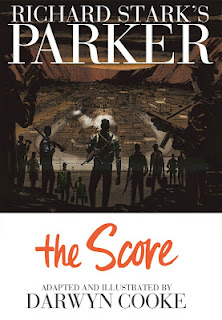 From a cop to a robber- Parker is back with his new face and a possible new job. This one involves robbing a whole town. Said town is located in a canyon with only one way in and out. Calling it tricky would be an understatement; it will involve hiring a lot more men than on a normal score, with much greater risk, but men of Parker's ilk aren't what they are through the working of practicality and sense, and so he puts the necessary machinations into gear. The thing with large scale swindles that encompass weeks of planning and many people, is the absolute need to know you have covered every angle possible, and it seems as though Parker may well have forgotten one. Or a few...

Darwyn Cooke's art and my love for the crime noir genre pre-ascertained my feelings for this, but objectively it is a pretty straightforward tale- man hires robbers, something goes awry (and not in a huge twisty way), they deal with it and on you go. The book can be divided into 3 sections- preparation, job and aftermath. The team assembling scenes are fun, but the nature of the job and town means scoping rather than infiltrating, even though the latter may have been more interesting. Of course, the convention of the hard boiled hero is that he's not allowed much character development, or he would no longer fit his remit and I felt that slightly in this volume. Parker is a different beast from Blacksad, being essentially a bad guy with a few rules, whilst Blacksad is a tough good guy struggling with constancy in a sea of dirt and deceit. Ironically, Parker is the one with room for growth, but doing so would nullify his USP.

There's not much I can say about Darwyn's art that hasn't been said before; his retro style fits these stories and characters like a glove. In this third Parker outing, he uses an orange hued colour wash which mirrors the desert ambiance and heat. Minor quibbles aside, The Score is still pretty damn super- once the gang get in the town, you're just waiting for the mounting tension to break and it has you turning the pages as fast as possible: it's pure comics at its best.