A slower second issue this, which is to be expected as we’re given more set-up. It works nicely though and it’s good to see that the writers are focusing on building the story and resisting the temptation to simply produce fan-boy moments. 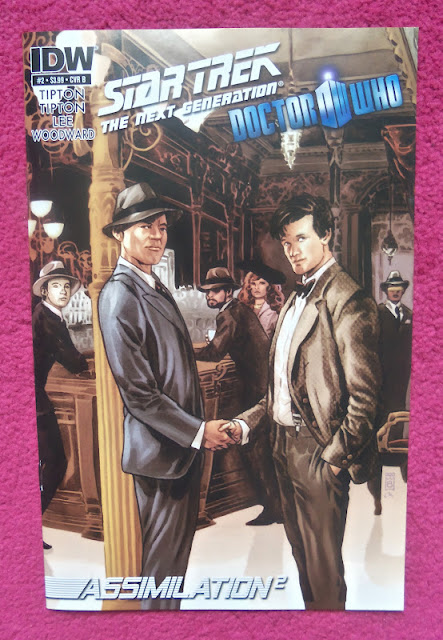 We join the Enterprise crew a few hours prior to the Borg invasion as they make an inspection of a mining plant on a host planet. The set-up is a precarious one- the planet is mainly water with some mountain terrain through which drilling takes place, making it extremely hazardous. It doesn’t help that while the native water-resident aliens have given permission for the extraction of resources, they are not any definition of friendly- refusing to get involved even if people are in danger.  Dispatched to assess the safety of the operation, Commander Riker and Lieutenant Worf find out just how unstable and risky it is when part of the machinery collapses suddenly, flooding the area. Luckily no-one is harmed. 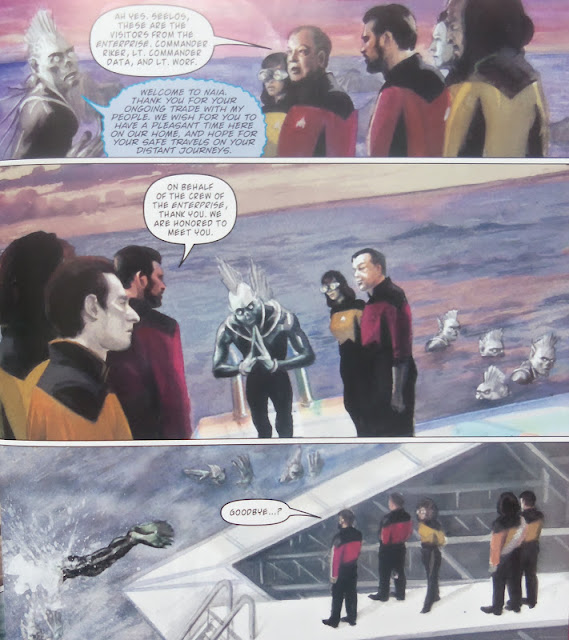 Upon return to the Enterprise, Captain Picard sends them to check out a new simulation on the Holodeck as a way of relaxing. The simulation is -dum dum- of a bar in San Francisco in 1941 and all appears to be working fine until three people enter, one of whom recognises Data as an android straightaway. The crew are surprised by the Holodeck’s level of advancement and as they engage further in conversation with the charcaters, suspecting first sentience and then malfunction, before deciding to end the exercise. But the three people and the TARDIS still remain. .

The powered-down Holodeck immediately reminded me of the Dreamatorium in Community- a nod to the Doctor Who spoof homage Inspector Spacetime perhaps. From there, it’s a short trip for the Doctor, Amy and Rory to Captain Picard.  Even as everyone sizes one another up and the Doctor tries to work out why he has never come across these particular planets and peoples having traipsed across the whole of the universe, a distress signal is received: there has been an invasion by the joint forces of the Borg and the Cybermen. 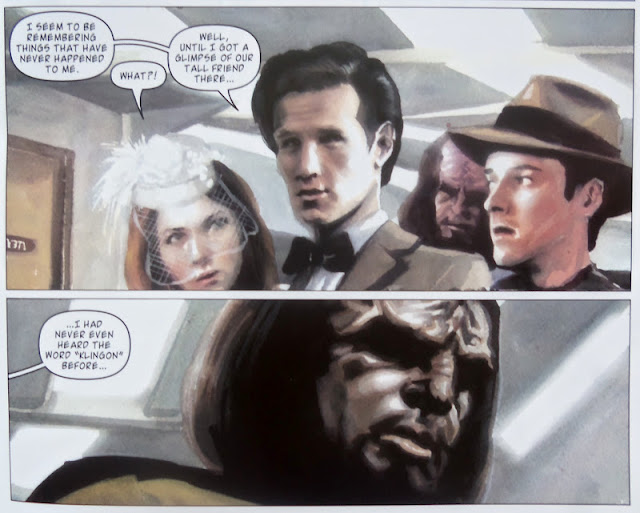 The pacing is spot on and there’s no rush to careen from action scene to action scene. I’m not really a fan of painted artwork in comics -too static and stiff- but it doesn’t detract from the story here in any way. They may yet have a part to play, but so far the Ponds have felt rather redundant, whereas in a shorter space of time, the Star Trek crew have established themselves as a unit with everyone contributing equally. The Doctor's dialogue, as previously mentioned, has been nailed.

Some intriguing points introduced in this issue – the Doctor finds himself knowing what a Klingon is, yet has never come across any of the species on the Enterprise, nor any of their planets. Also the precarious mining situation and Picard’s insistence on continuing seems suspect. I really like what they’re doing so far with this crossover, but to be honest it’s solid rather than spectacular. Of course the horrible by-product of this experiment is I now am starting to veer towards issue buying as perhaps not a bad thing. Which is in itself a very bad thing.

I know, I know- rubbish pictures. I'll try and make the effort to scan next time- so busy at the moment.
Posted by Zainab at 10:11