The Stuff of Legend vol 3: A Jester's Tale review

Slightly behind in reviewing the sheer excellence that is The Stuff of Legend. The end of the second volume saw the toys disbanded and separated and this third book picks up where it left off, with the toys becoming further embroiled in the complex politics of the Dark. The action interpolates between two main threads- the first follows the Jester's journey as he attempts to rescue his friend the Princess, who he believes to have been taken by a rogue tribe of toys. As he traverses over land and water, the Jester finds his endeavours thwarted at every turn, as he is mistaken again and again for the mysterious Laughing Ghost, a bodacious and fearful pirate figure who bears no allegiance to Boogeyman or foe and is remarkably alike in appearance to the Jester himself. . . 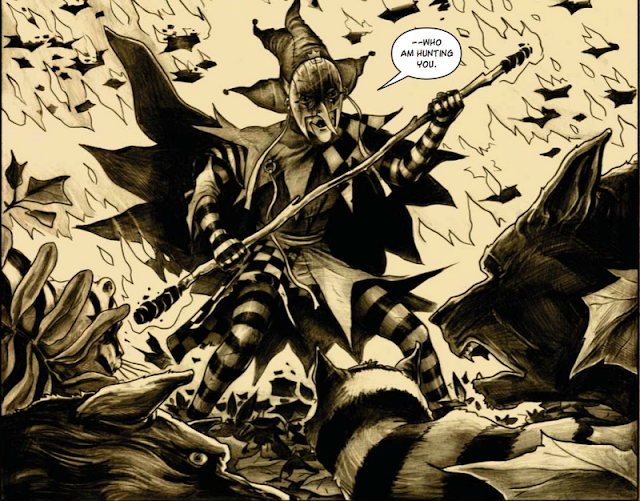 The second thread focuses on the boy as he makes an escape bid of his own. I had previously wondered at the inclusion of the boy's brief interactions with other prisoners- as readers we don't really feel much for his character, not having been shown the bond between him and his toys- while it's implied on the toy's' part by their rescue effort, he's unaware of both their sentience and their presence in the Dark. I should know better than to doubt Mike Raicht and Brian Smith by now though. They take a seemingly weak point in the story and give it a doozy of a twist, leaving things deliciously poised and my mouth quite literally agape. It's clear that Raicht and Smith know where Stuff is going; it has the tight plotting of a well-thought out narrative and they're not afraid to allow things to develop quickly, introducing strong new threads and characters without diverting from the main storyline. 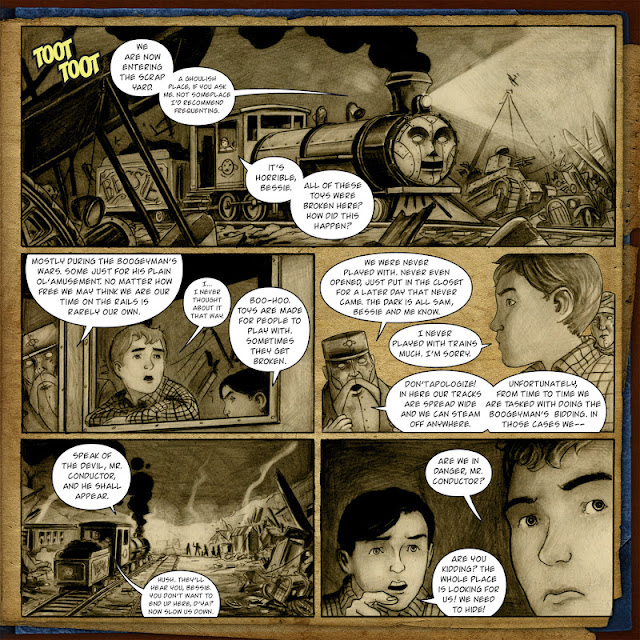 It would be stupid to deny the many obvious references in Stuff- The Lion, The Witch and The Wardrobe, Alice in Wonderland, Toy Story, Kingdom of the Wicked amongst others, but these are just references, with Mike Raicht and Brian Smith delivering an absorbing and original story. What sets The Stuff of Legend apart and makes it special is simple- top notch storytelling and fantastic characterisation. For example, when the toys cross into the Dark, they find themselves transformed from wood, plastic and metal into flesh and bone- with a difference. Max the teddy-bear is transformed into an imposing grizzly, the jack-in-the-box becomes a spindly, dandy Jester, and Quakers the wooden duck -much to his joy ('I'm a real duck!)-' turns into a handsome drake. This physical change doesn't extend to personality, instead serving to highlight exisiting traits- Max's leadership qualities now befit his power and stature, the Jester's quick wit is emphasised by the deftness of his movements and Quaker's scattiness is personified by his erratic flying and wing-flapping. It's such an on-point device; depicting the departure of the silent inanimate toys from the safe confines of the boy's bedroom, to live characters capable of mounting a serious challenge to the Boogeyman.

Thi3rd World Studios have a hardback omnibus edition of The Stuff of Legend releasing in August, collecting the first two volumes- it's a perfect jumping on point for new readers (and an upgrade my paperbacks will be needing). When I love a book, I worry about the next volume taking a drastic dip in quality. Happily, A Jester's Tale continues in a similarly excellent vein to it's predecessors. Consistent brilliance .
Posted by Zainab at 14:39