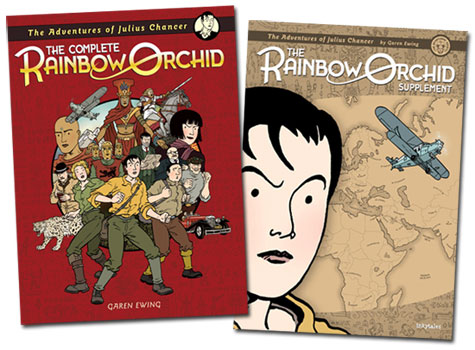 I'm rather ashamed to say I haven't yet got around to reading Garen Ewing's Rainbow Orchid triology, which is by all accounts (and by all, I mean Richard over at FPI, whose opinion in which we trust), rather magnificent. So the news from Garen's blog on Friday that Egmont will be releasing a collected edition of the books from September the 3rd, is just the kick up the bottom I needed- I'll definitely be picking one of these up.

Right from the beginning I had intended RO to exist as a single volume, so this is the book that matters most to me, and is the edition I want to supersede the three volumes and to be most widely available, if at all possible.

It's 117 pages of story and comes with 17 pages of extras, including character development, research notes, sketches and comic creation. There are no differences or additions to the story from the three volumes, except for the correction of three or four minor text errors and a couple of graphical ones that you'd be hard-pressed to notice.

He's also announced self-publishing a Rainbow Orchid Supplement book, which will mainly comprise of annotaions for the whole story, other information, and sketches not featured anywhere else. This will be one of those limited number things, and Garen's aiming to have it out for late September, but promises copies will be available for purchase at Thought Bubble in November.
Posted by Zainab at 18:31