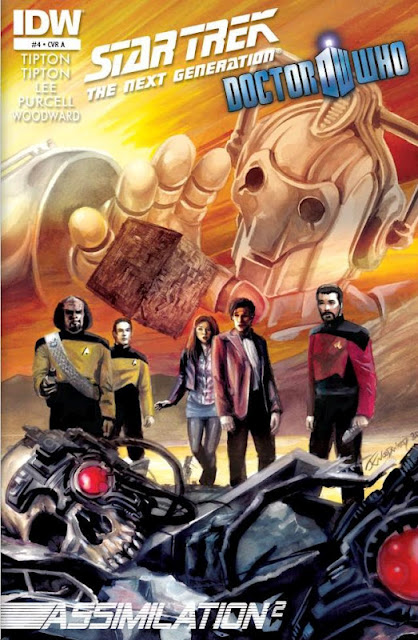 I have decided: issue buying is not for me. On Wednesday, I was all a-flutter as to whether the new Trek/Who issue was out, and who should dash to the comic book store and when, until Joe helpfully reminded me that new comic book day had been moved to Thursday due to the bank holiday. On Thursday, my partner in Trek/Whovian crime, Suki, was otherwise engaged which meant I had to take an extra half hour for lunch in order to duck out to town. I previously and incorrectly described this as a dash. It isn't. It's a bloody trek (no pun intended) from my workplace to the other end of town. It involved lunch-time crowds and sweat and it wasn't pretty.There has now been talk of a pull-list delivered to my home, and I have succumbed, but only for the run of this series. Behold my commitment at bringing you these stately reviews that you didn't even know you wanted. Let me tell you: I gave up FOOD to buy this comic- you want this.

After ending on the potential doozy of the Doctor meeting Guinan in issue 3, we open with it here only for nothing much to be revealed. Guninan knows the Pond's names and that the Tardis is parked in the Holodeck, but nobody appears to be overly startled by this, considering her abilities. Apart from reiterating that the flow of time has been disturbed and reassuring Pickard that he can trust the Doctor, the meeting is un-noteworthy: squib officially dampened.  An incoming message from the bridge leads to some surprising news:  the Cyber/Borg fleet is not headed to Earth as suspected, but instead travelling in the opposite direction. This curious development  leads to Riker, Data, the Doctor and the Ponds to teleport to Cogen V, the planet that was in the midst of being invaded when the Cyber/Borg alliance suddenly turned tail. There, they find the planet devoid of people but strewn with Cyber and Borg casualties: it would seem the Cybermen have double crossed the Borg, and are making a direct course to the Borg's planet for a hostile takeover. 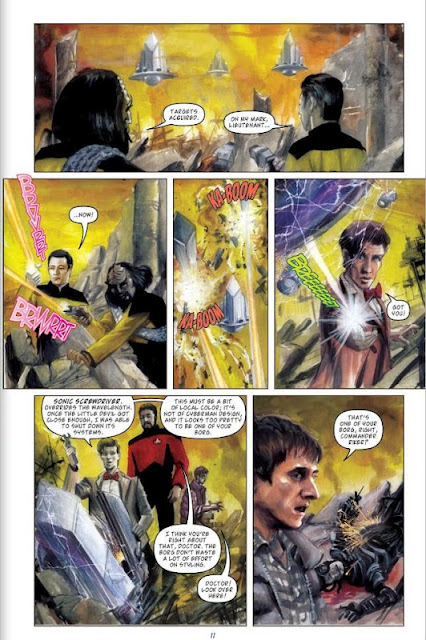 Further investigation shows the debris of Borg ships floating in space, having been blasted to smithereens by the Cybermen. The few surviving Borg ships hail the Enterprise in hope for a truce to together defeat their apparently common enemy. Pickard is not playing ball, however, adamant that after all the pain and bloodshed the Borg have caused, they will find no respite from him: he is willing to leave them to their fate. I liked the curveball of the Cyber double cross and the Enterprise crew potentially having to team up and rescue their enemy. Obviously the Doctor is not going to stand by and watch the annihilation of a race, regardless of how bad the Borg may be. The question is, will he be able to persuade Pickard to aid the Borg in their hour of need, or in the face of Pickard's stubbornness, will he defy him- take the Tardis and join with the Borg in an attempt to save their planet. If it's to be the latter choice, to what extent will Pickard stand by and watch- it's inevitable he will go into action, but with the Doctor or against him? 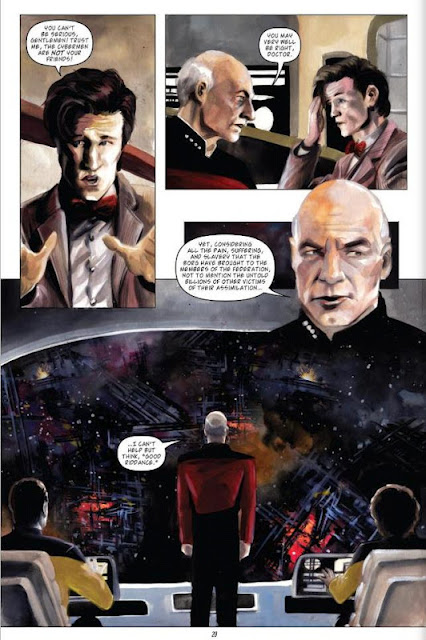 I felt this was a very strong issue- it moved the plot forward considerably and set up some intriguing points, but there was one big, big problem: the art. The previous 3 issues all have art by JK Woodward and I assume he was doing his own pencils in those. In this issue, the pencils are done by Gordon Purcell  and only the colours by Woodward, and unfortunately it leads to a sharp downward turn in the art. The characters are globby and crude- Amy, in particular, is unrecognisable-, she looks like a different person panel to panel, and none of them have the degree of accuracy and realism achieved in issues past. It extends to the coloring too- on the first page the Doctor looks like a clown, and in one instance Amy's ginger hair has been gone over with a red crayon, but even that not properly, because you can still see about a third of the orange hues at the bottom. The deterioration in the art is incredibly distracting and there's no avoiding it, which is a real shame, as this issue has been the best one so far.
Posted by Zainab at 10:18