Good news for Commissioner Gordon- the secret of how Batman manages to magically disappear on him time and time again has been revealed. Aled Lewis illustrates the lengths Batman has to go to in order to retain his aura of mystique. I've always loved Bats' disappearing trick on Gordon, despite it being - let's face it - somewhat rude. I'm also surprised disaster hasn't occurred yet, with him vanishing before Gordon parts with some vital information. Seriously though, I like how Gordon uses the disappearing trick to keep tabs on who's behind the cowl - he knew something was up when Azrael took over in Knightfall trilogy by it and whenever Dick dons the cape and cowl too.
I can't remember which book it's in (if anyone knows?), but one of my favourite examples of it is at a crime scene near a park, with Gordon sat on a bench under a tree, smoking, and he begins speaking, assuming Bats is perched up in the branches somewhere. Not getting a reply, he turns to look, realises his mistake and berates himself for his stupidity. And then, of course, Bats replies to him. In fact, that's a great new comic right there - Commissioner Gordon randomly talking to inanimate objects he thinks Batman may be hiding behind. Ah, how I love the Batverse - they're all nuts in Gotham, aren't they? Warms the cockles.

And a couple more (if anyone knows who that last one is by, please let me know): 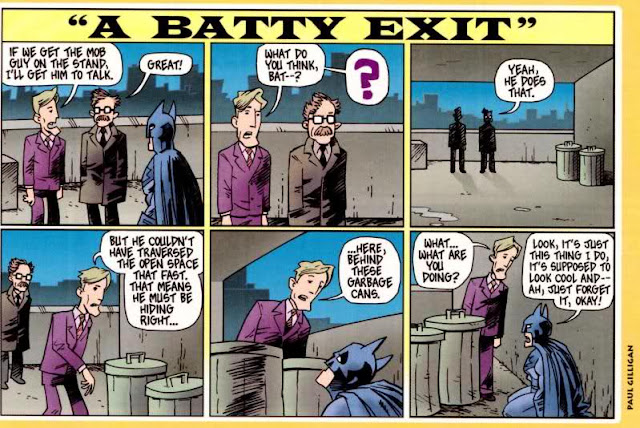 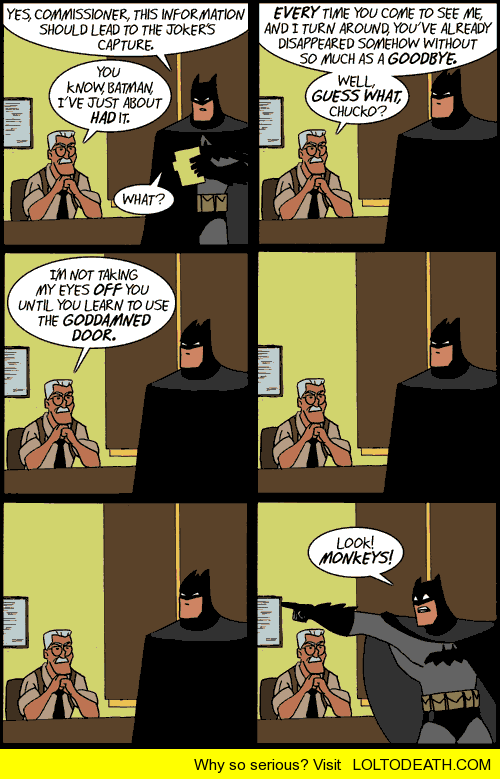