In praise of. . . Corinne Mucha 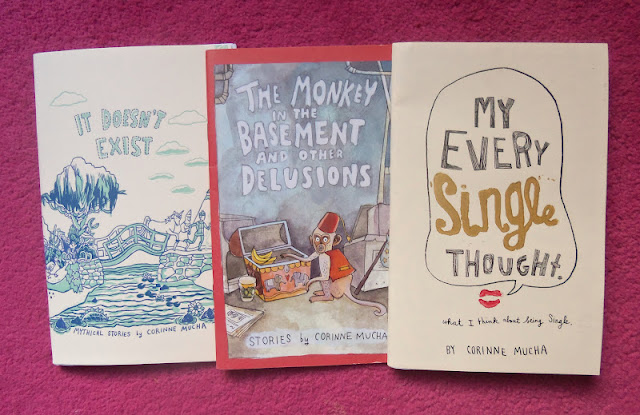 A recent discovery: Corinne Mucha is the bee's knees. It began with the Ignatz-nominated 'The Monkey in the Basement and other Delusions' and continued with 'It Doesn't Exist' and 'My Every Single Thought'. Ostensibly these come under the umbrella of 'mini-comics', but where even the best mini-comics often feel slight, Mucha packs so much into these pages, pictures brimming off the edges and words, words, everywhere (an unfashionable and dying art in comics), that you never feel you've read anything other than a full, dense and enriching narrative. Her shining quality is her ability to combine irreverent humour with more serious ruminations in a manner that's honest and contemplative without being overly earnest or preachy. Her mini-comics are one of the best uses of the format I've come across, her narratives layered and rewarding.

I confess to a little snobbishness of auto-bio comics, specifically the indulgent, singularly affected, 'sad-boy' type which seem to have become prevalent in the medium. They always seem a fraught endeavour, as you're presuming that your life, problems, dreams are of enough interest to engage and be cared about by others. Mucha overcomes this by giving her experiences a fictional bent, veering off into imagined territories, interpolating diagrams, charts, comics, humorous shorts in support of her narrative ideologies. 'My Every Single Thought' in particular, written after the ending of one of Mucha's own relationships, is a dizzying , thorough exploration of the connotations of the word as a label when applied to women who aren't in a relationship.

There is, of course, absolutely nothing wrong with being single. Yet it's a tag that carries a world of largely negative association for women, the absurd implication being that surely no woman would be  on her own through choice. It is, unfortunately, an ideology so deeply and widely ingrained in society's standards and expectations that even a rational, intelligent woman who is aware of its construct cannot always remain unaffected, as Mucha shows. She honestly depicts the full spectrum of emotions and phases she goes through at this time- she's happy to be alone, she wants to be in a relationship so she can have someone to go out with, she doesn't want a relationship as its merely conforming to social pressure. Those examples are perhaps a simplification, but she leaves no stone unturned in examining the avenues of this unique paradigm. One can be dismissive of messages and lines of thought that are forcibly or strenuously expressed, but Mucha's capability with zesty humour and what comes across as truthful contemplations, serves as the perfect instrument for such an exchange. 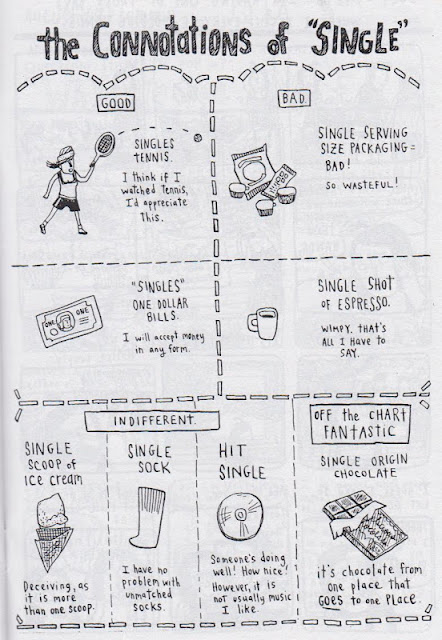 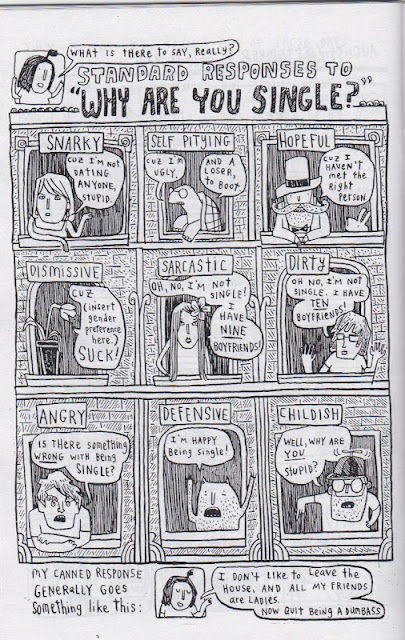 Something that I've noticed in both 'Monkey' and 'It Doesn't Exist' is the way she builds her themes and points gradually over the course of the stories, with the last one being the weightiest and most eloquent. The first few shorts begin with a muse-y meander and reflection, but the final one is invariably a humdinger, pulling together threads to deliver a fierce reinforcement of the issues presented. She charts a backwards course, where people go from the 'normal' to the mystic or fantastic, she begins with unicorns and and dreamscapes developing them into familiar and recognisable terrain. The whimsical vehicles and irreverent drawings are a deceptive cloaking device through which she discusses personal experiences with humour, bringing new subtleties and perspectives to the larger questions and issues that arise.

Another winning asset of Mucha's work is the way she begins in one place winding along to an unpredictable ending: it's not a mappable route but it feels organically progressive. This is demonstrated in 'It Doesn't Exist', which begins with a tale of mythical and extinct creatures gathering for a party, one that grows bigger each year as they're joined by things that have been lost over time, or consigned to fable and obsoletion . It's followed by 'The House of Worry', where a person's anxieties and stresses are extracted, removed and locked up in a heavily guarded building (to best prevent escape), and closes with 'The Modern Quest', about humanity's endless search for betterment, fulfilment and happiness. Perhaps not instantly connectable on the surface, there are definite common motifs that run through all the stories- an idea that is seeded in the opening tale and becomes clearer and more expansive by the time that final one-two is reached .

It's always pleasing to discover new favourites, and like all the best writers, Mucha's primary strength lies in the levelness of tone she is able to achieve whilst producing genuinely entertaining, humorous material that encourages further thought.

You can find Corinne's website here and buy her comics here. 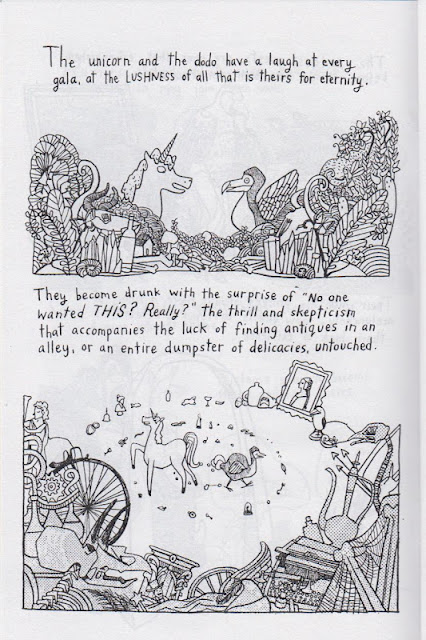 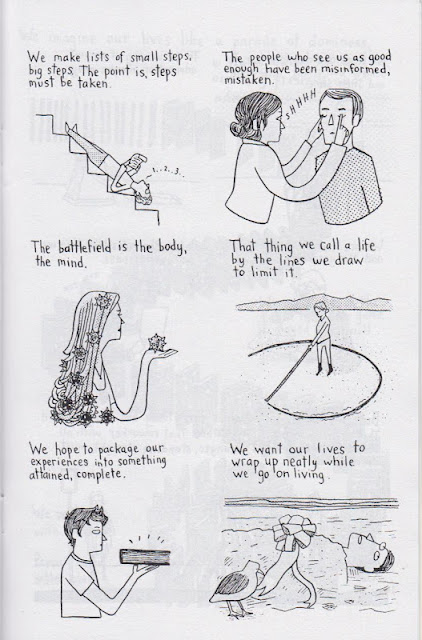