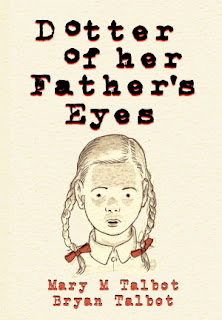 This is amazing and just so very, very pleasing. Joff Winterhart's Days of the Bagnold Summer and Mary and Bryan Talbot's Dotter of her Father's Eyes have both been shortlisted for the Costa prize, where they will compete shoulder to shoulder with prose books. I'll be honest, I thought something like this was still a long way off and I couldn't be happier to be wrong. To all of us who want comics to be recognised as a brilliant medium which offers endless possibilities, these nominations are a validation of what we've known all along. I know Chris Ware won the Guradian's first book award for Jimmy Corrigan back in 2001, but the selection of two books is a further encouraging step.

The cause for excitement is because now feels like it could be a seachange moment. Nobody's denying the problems within the comics industry, but the mood has never felt more positive: with digital comics, creator-owned comics and both readers and creator exploring a wider range of material outside superheroes. In the UK, in particular, it it feels like a special time for the medium. The hope would be that other literary prizes would follow the Costa's example- certainly there's no shortage a wealth of material to choose from and that the the inclusion of comics in literary awards would become a regular and 'normal' practice.

Some quotes from Bryan Talbot on the nominations, taken from a piece in the Guardian:

"I think it's a big thing for the comic medium generally," said Bryan Talbot. "It is another instance of the growing acceptability of comics as a valid artform."

'many people tended to view comics as a genre rather than a medium, whereas "they can tell any sort of story". He said some tended to not think beyond Superman. "People don't seem to realise there's a whole range of quality material out there which is worth any intelligent person's time to read." '

And one from a more surprised Winerhart:

"It doesn't feel like a novel, it's got pictures in it! I didn't know it had enough words to constitute a novel. Some graphic novels are quite epic and very cinematic in scope and mine is incredibly not like that."


‘This is a watershed moment, I think, in the recognition of the graphic novel as a valid literary form, perhaps even more important than when Chris Ware’s Jimmy Corrigan won the Guardian First Book Award.  Dotter of Her Father’s Eyes is a brilliant collaboration between Mary and Bryan Talbot, writer and artist. And while Bryan is one of the most distinguished veterans on the Cape list, the prodigious Joff Winterhart entered the first pages of Days of the Bagnold Summer for our annual Cape/ Observer/ Comica Graphic Short Story Prize and we commissioned him to turn it into a book.’

Congratulations to the Talbots, Joff Winterhart and publishers Jonathan Cape. If you want to know more about either book, you can read my review of Days of the Bagnold Summer here and Richard's review of Dotter of her Father's Eyes here. 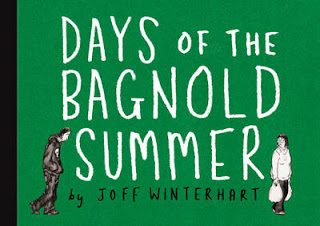