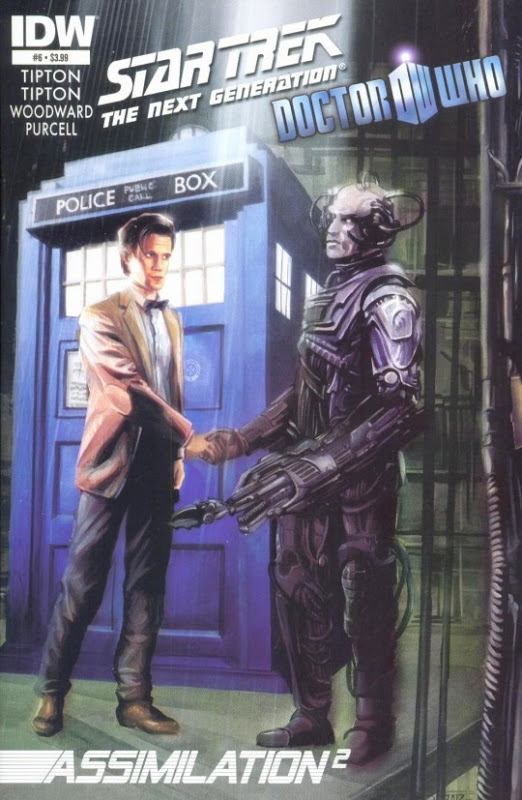 My reviews of this comic have been slightly schizophrenic and that's partly because I'm unused to issue reading and analysing stories in bits- and it is a different kind of beast, I think. It's also partly due to the fact, that this series has been incredibly, frustratingly uneven in tone. I'm curious as to how it reads in a collected format, simply to see how it fares in comparison. Art issues aside, this again, was a stronger issue. By stronger, I mean better (than previous issues) in terms of pacing, a rise in quality and a potentially interesting direction being taken (although one can't help but think too little, too late).
Having been persuaded by the Doctor to help the Borg overcome the Cybermen, Picard, Amy, Rory, the Doctor and several others teleport onto a neutral planet to meet with a small Borg convoy to assess their options. The Borg reveal to them that it was the detection of the Tardis and the Doctor's presence that threw the Cybermen for six, leading them to revert to their true natures and assimilate the very race they had allied with. It's begrudgingly decided that to ensure the survival of all parties involved, the Enterprise will come to the Borg's aid, allowing a single Borg representative on board the ship to supply any necessary information and assist in devising ways to stop the Cybermen's onslaught. 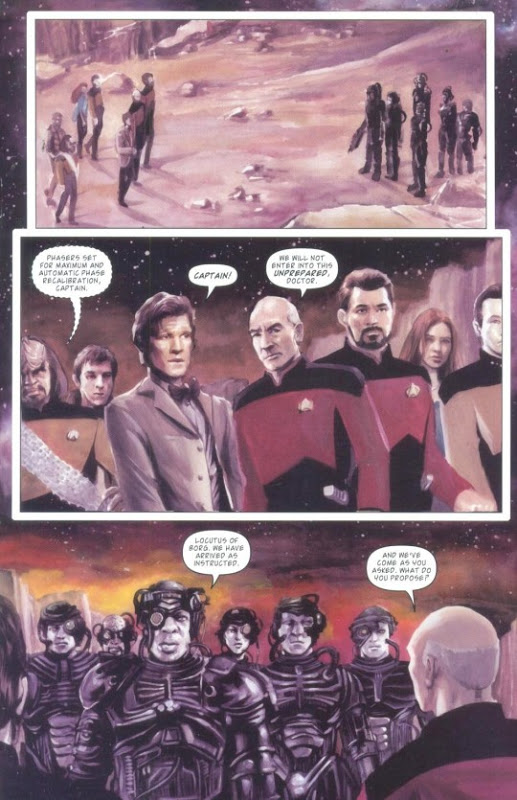 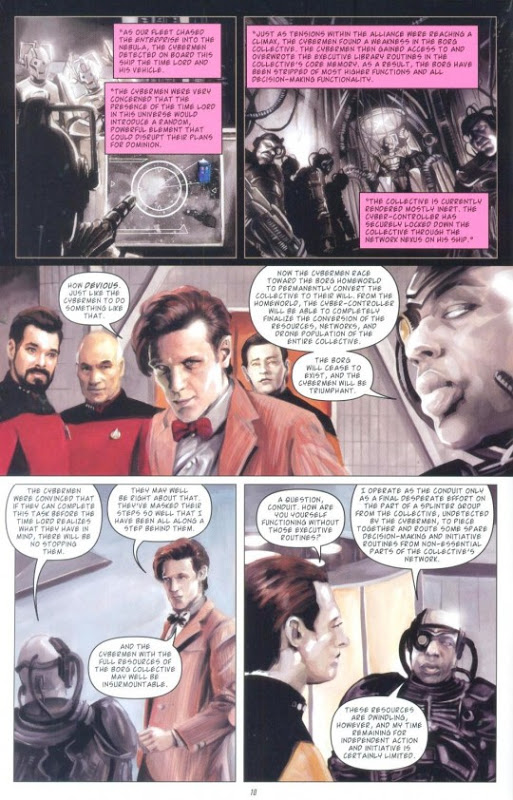 Once on board, the Borg representative informs the crew that the Cybermen have stolen, manipulated and then erased the collective core memory mainframe from which all the Borg operate, stripping them of their ability to function and rendering them inert. The Cybermen have corrupted the mainframe, programming it to control some of the Borg to do their bidding. The recovery of this core memory database is essential if the Borg are to regain their former power and mount a challenge against the Cybermen. As no copy of this original mainframe exists in the present, a trip in a certain wooden blue box beckons. First though, the Doctor and Picard return to the mining planet in Issue #2 to obtain another ingredient vital to their plans in overcoming the Cybermen: gold.
A return to the planet in issue 2, that of shaky alliance and an unstable mining structure, which has a nice moment where Picard tries and fails to convince Seelos, the Dai-Ai fish-people leader to help them curate the precious metal. Instead, the Doctor takes over the persuasion, with his fast, lengthy, words-tripping-over-one-another delivery, leaving Picard looking dryly on and Seelos bamboozled. It's moments like this, when more focus is given to characterisation and interaction that the book shines, despite these being characters that we're familiar with. Meanwhile, the Doctor and the Ponds travel back in time to the last time the Enterprise had exact coordinates of a Borg vessel, from which they can then access and copy the Borg mainframe library- to the Battle of Wolf ('Bad Wolf,' mutters the Doctor), where a Borg mind-controlled Picard is leading the killing of hundreds of innocents against his own friends and people. Luckily, they are protected by a form of invisible shield, which means they can move about freely and unseen by all. All, but one. . .
Overall, an easy issue to read- enjoyable with lots going on and things moving quickly. The Doctor having to travel back to the time when Picard is in the Borg's thrall adds a little spice to the mix, and hopefully this won't be simply be to 'fix' the things Picard did while mind-controlled, but something of further interest. With only two issues to go though, that seems unlikely. 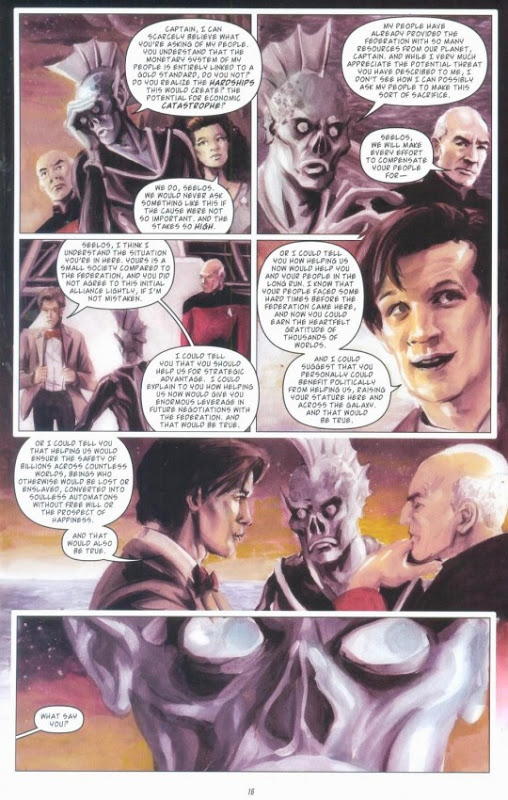