Here we go then, some thoughts on ThoughtBubble, followed up by the all-important pictures of what I bought. I'm sure Richard will do a proper report with actual photographs of the con and people exhibiting, but in the meantime, here's my narcissistic little take. If you've never been to ThoughtBubble before, you really should consider attending next year. What makes it special (apart from it being homed in my fair city of Leeds) -and I think this would be unanimously agreed- is the atmosphere: it's friendly, inclusive, welcoming and everyone is full of good will, and I say that as someone who's not the most outgoing person in the world. It has a great mixture of independent/small press and more mainstream comic and creators, and it gets bigger every year, so if it can retain that atmosphere and blend of diverse comics, I don't see anyone else taking the best UK con crown.
I was a little bit nervous about attending this year- being conscious of going as 'press' and feeling a bit of a charlatan, considering I've written all of 60-odd pieces for the site since July and not really knowing how to introduce myself without seeming dick-ish 'Hey, I write for FPI!' 'And?' I overcame this by not introducing myself at all. No, I'm kidding. My primary objective was to enjoy the con, buy a lot of comics, and if conversations struck up naturally, great.
I met Dan Berry and Joe Decie who were sharing a table - finally picked up Joe's The Accidental Salad- and were just some of the nicest people ever, although, we established, rather rubbish at the hard sell, so its a good job their work is brilliant enough to sell itself. Dan had pages of the new comic he's working on about his recent trip to Algeria and that looks superb- more vibrant in use of colour, I thought. I was so caught up in the excitement, I totally forgot to ask him when The Suitcase will be coming out. Also met and chatted to Howard Hardiman, who has now wrapped up The Lengths: he talked about how good a feeling it was to have finished it and was surprised by it's success. I think he's taking a small break and doing some illustration things with exhibitions before he starts another comic. Over in the Armouries Hall, I came across a tired-looking but lovely Warwick Johnson Cadwell and bought Karagoz, a new 36 page black and white comic illustration zine that is just beautiful. We talked a bit about Nick Edwards and Thomas Wellman and I came home and Googled Mr Wellman and felt immediately depressed for not being able to read French.
Much to my friend Andy's amusement (who was there to meet the immensely talented Felt Mistress), whenever I bought a book and was asked if I would like it signed I would reply no. Apparently this is not a done thing. So if you asked me if I wanted your signature and I said no I apologise: I didn't mean any offence. I've always just thought signing is purely to add monetary value, or if it's a creator you have a particularly deep affinity for I can understand why you would perhaps want their signature, but as Richard patiently explained to me later, it can mark the remembrance of a particular time and event when you were at a certain place and met someone, so I guess I can see how that would mean something to people. Andrew Wildman wasn't haven't having any of that though- 'You've got to have it signed!' he insisted, so thanks Andrew :)
On the whole, ThoughtBubble is pretty perfectly organised; you don't have to wait long in queues, the aisles are nice and wide, the one and only problem is much of the big names such as Mark Waid, David Peterson etc are all put at one end of New Dock Hall and the queues for them block up the aisles so you can't get to the tables of other exhibitors, but to be honest, there isn't really much of a solution to that, as queues would congregate wherever people were situated. A couple of times I left tables because attendees were just taking too long talking to people; I know it's exciting to meet people you admire and nice to chat to them, but you're robbing them of potential sales when you're at a a table for too long. It's considerate of everyone if you're a little aware of your surroundings and how many people are around you and a table.
It was also lovely to finally meet Richard (and Louise and Molly), Martin and James and even Mr Matt Badham! I was fairly confident from my exchanges with the guys they would all be awesome and they were. James, spent much of the evening dispensing advice and teaching me how not to be self-depreciating (I thought it was part of my dubious charm)- Me: 'My writing is shit.' James: 'Nooooo!' with horrified look, whilst Richard looked bemusedly on. The thing is, I don't think my writing is rubbish, I think it's the best bloody writing in the world. However, I know this to be an outrageous claim, so I attempt to temper it with psychological wiles.
Unfortunately, I didn't make it to the British Comic Awards as I had a headache which turned into a full-blown fever and headcold on Sunday, which meant a lot of sleeping, drinking water and not much else. Luckily I had bought most of what I wanted on Saturday and walked home with two bags full of comics goodness on my achy little arms. Here's what I got: 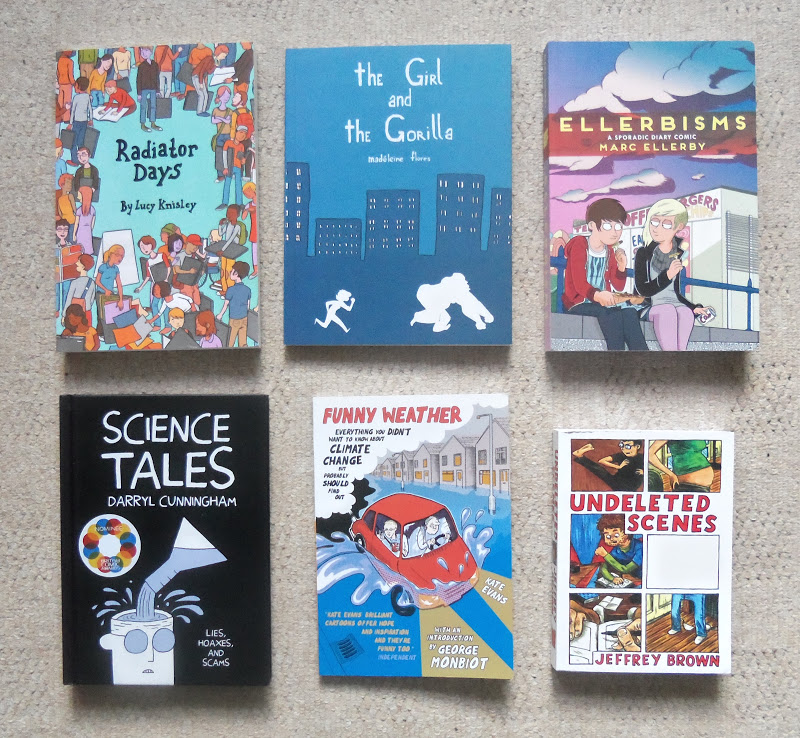 Radiator Days by Lucy Knisley: Lucy only had a small amount of her stock with her and it all sold out on Saturday. She had four of her books with her and they all looked excellent but I had to make a choice, so did what I always do in such situations: went for the thickest book.

The Girl and the Gorilla by Madeline Flores


Ellerbisms by Marc Ellerby: Molly got this too, so obviously we share excellent taste. I really love the rounded corners on this book- great production values.


Funny Weather: everything you didn't want to know about climate change but probably should find out by Kate Evans

Undeleted Scenes by Jeffrey Brown from the Top Shelf stall 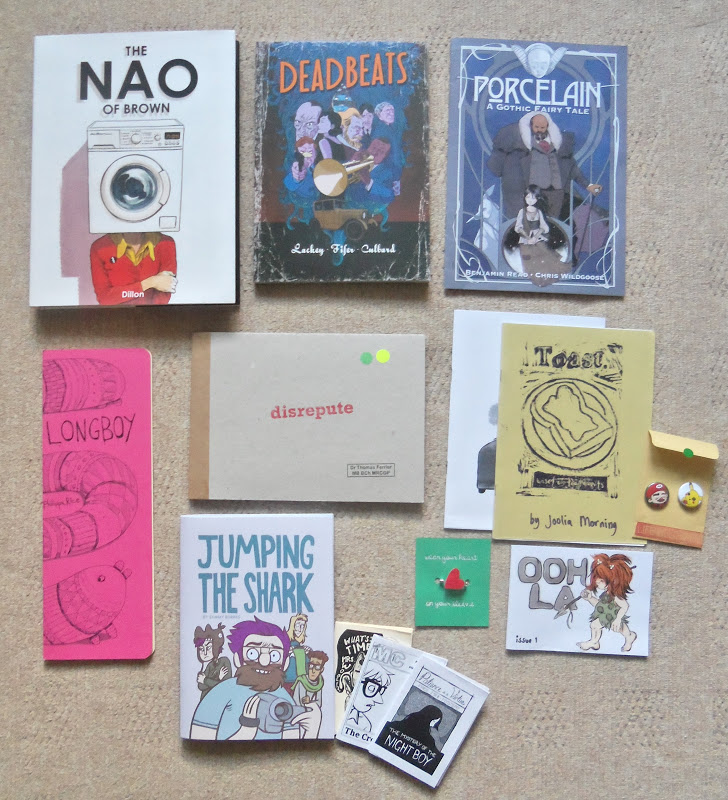 The Nao of Brown by Glyn Dillon


Deadbeats by Chris Lackey and Chad Fifer and illustrated by blog favourite Ian Culbard: Deadbeats was making it's debut at TB, I believe the guys only had 68 copies to sell and they went pretty quickly.


Porcelain: Joe recently did a post on Benjamin Read's and Chris Wildgoose's upcoming gothic fairytale graphic novel due for release next year. This preview reminds me a lot of The Whispers in the Walls.


Longboy by Philippa Rice: I could have easily bought everything from Philippa's table it was smush full of goodness, but no money!


Disrepute by Thomas Ferrier this is available as a paperback tome, but this hand stitched version which has a selection of the comics from the book was too good to miss.

Jumping the Shark by Sammy Borras and mini zines 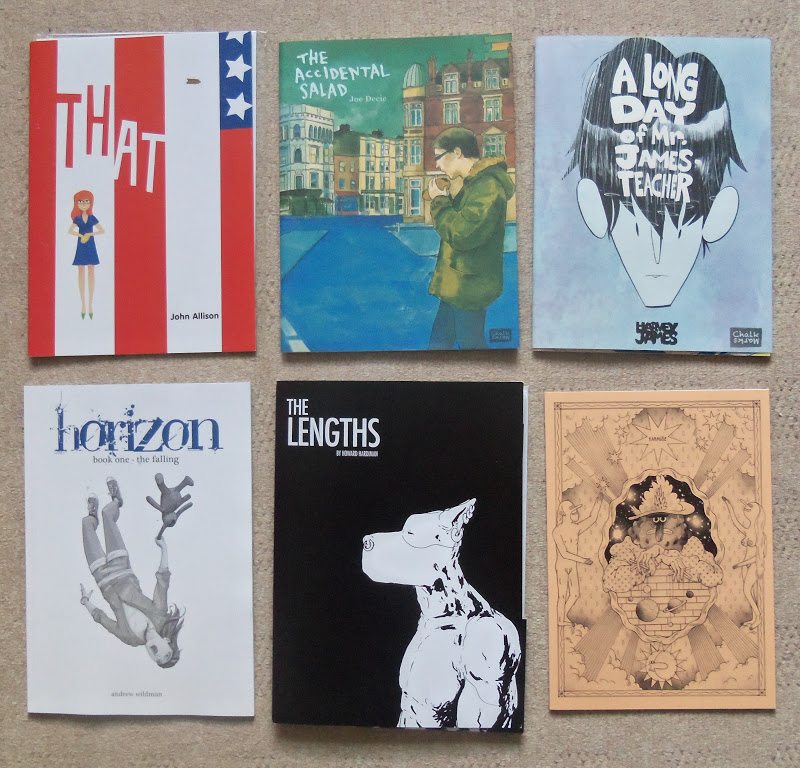 That by John Allison and You'll never stop me singing print (behind the book) : ordered That a couple of weeks back and not yet received it so John gave me another copy, which I immediately felt bad about so had to buy a print to compensate. Luckily his prints are great so everything worked out nicely.

The Accidental Salad by Joe Decie

A long day of Mr James Teacher by James Harvey


The Complete Lengths by Howard Hardiman, which comes in handy glossy folder and a free poster.
Karagoz: bought this on the lovely Warwick Johnson Cadwell's table- he's contributed to it. It's simply amazing: you need a copy of this- keep a look out on WJC'S blog- he's promised to post the link when it's available to buy online.


And that's it. Had a brilliant time, really looking forward to next year. A mention for all the cos-players at the con before closing; I can't say that I've ever wanted to dress up as a character, but I think it takes guts and bravery to do so. All the cos-players at TB looked like they were having huge amounts of fun and there was no separation between them and whatever a 'comic-fan' may be. Comics are as much about passion and community as anything else, so let's include people instead of ostracising them.
Posted by Zainab at 22:30