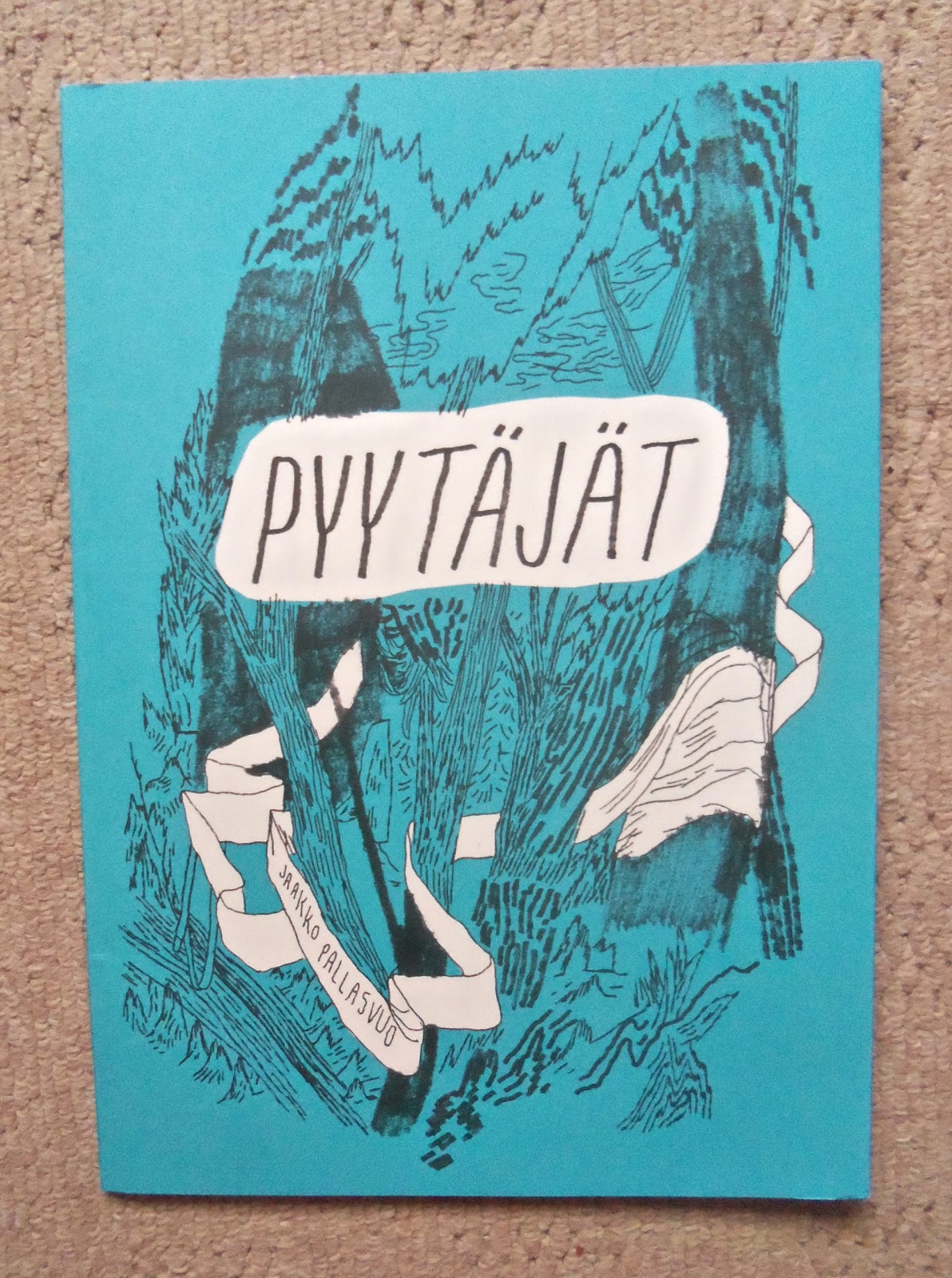 Here are some things I'll be reading over December between the laboured assembling of librarianship assignments. Pyytajat (translated as The Trophy Hunters) by Jaakko Pallasvuo, a Finnish artist living and working in Berlin,  is just a beautiful looking comic. I mean, take a look at that cover. It helps to sate my ongoing fixation with comics printed on newsprint or any rough recycled paper. A pretty curious feature I've not come across before, is that the text in the panels is Finnish, with an English language translation running across the bottom of the page (see close-up picture below). It'll be interesting to see how this affects the reading of it, but for now I'm contented by it's visual beauty. Here's a brief synopsis of the story:
'"A week ago they discovered Simon's body. He had been missing for two years, but had only been dead a few days." The Trophy Hunters is a mysterious story on relationships. The main character, a famous autobiographic author, travels home to his brother's funeral. The travel soon turns into a trip to the past and to a new reality revealed by death. Facing or understanding that is not easy.'
Bought from the Good Press Gallery here, this is Pallasuvo's first full length comic book, having previously contributed to anthologies and zines. From an edition of 500, 36 pages, perfect bound. 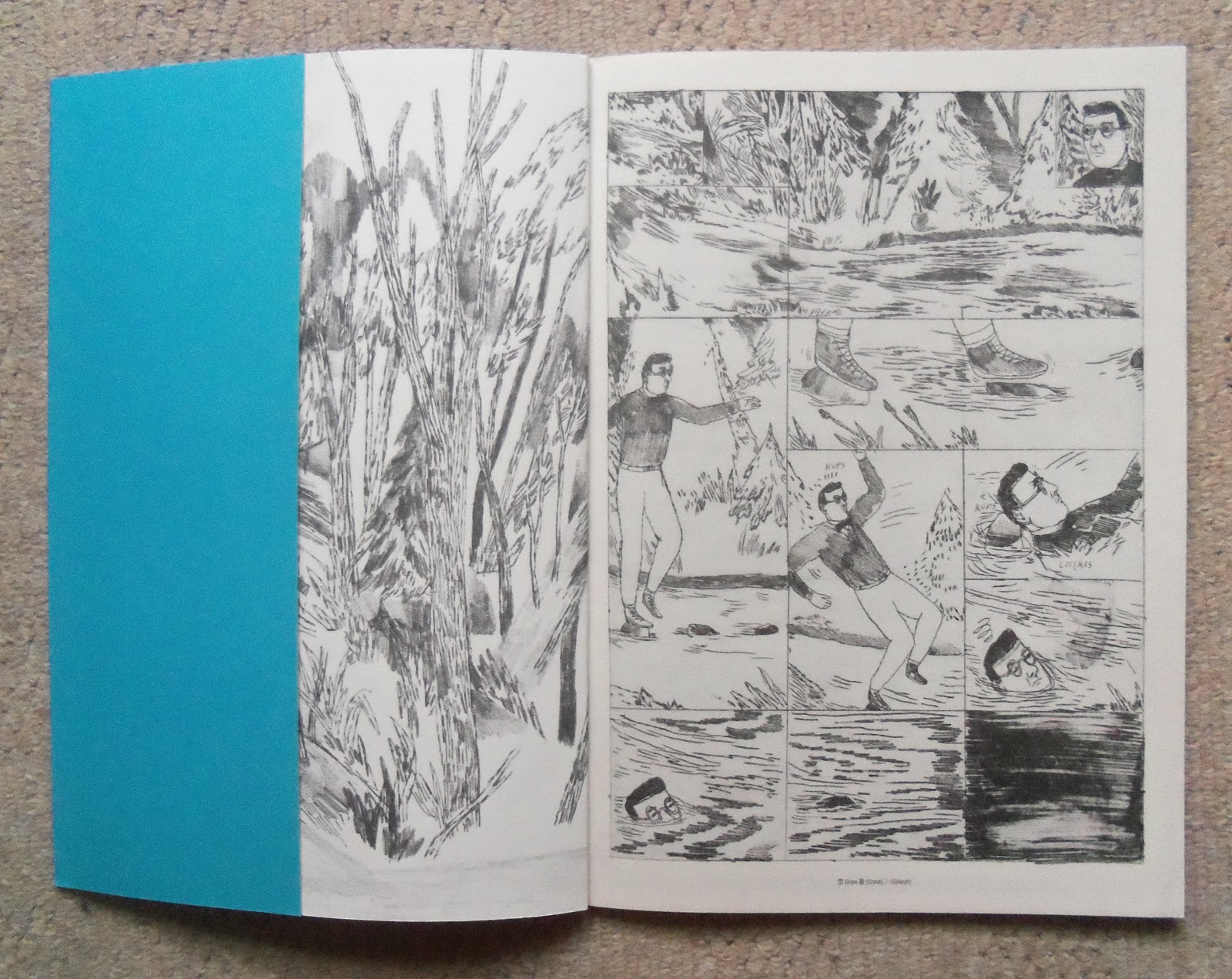 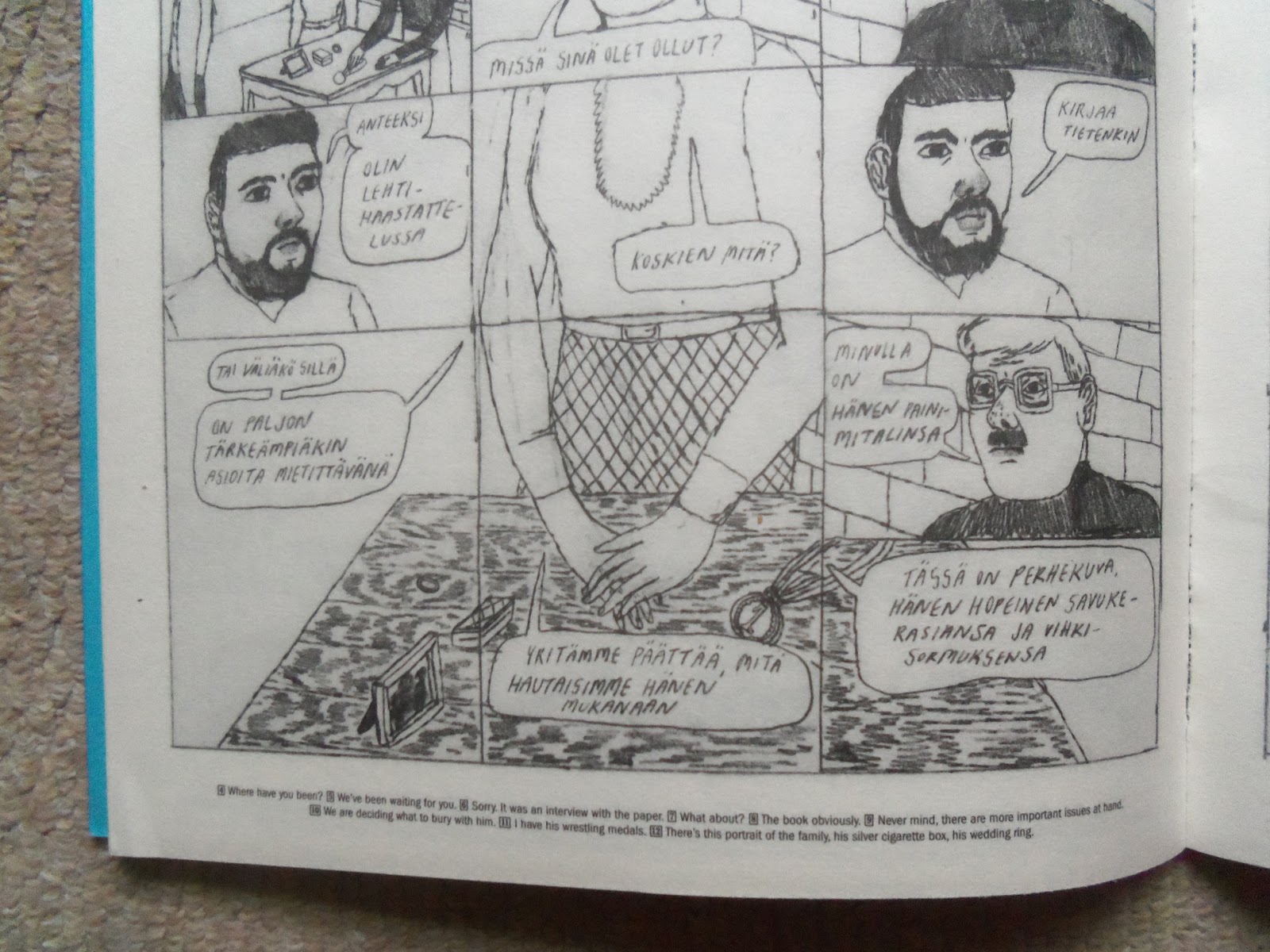 Two comics which make an appearance on the best of 2012 list I'm currently compiling for FPI: L. Nichols' excellent Flocks (review of issue 1 here)- the second issue pictured below, and Sam Alden's Farmer's Dilemma. Flocks arrived earlier last week and having read it I've been surprised by a few things. Nichols has switched from black to white to colour from this issue, a change I was initially a tad sceptical towards, the starkness of the images in the first part provided an appropriate juxtaposition to the raw subject matter. Nichols has moved on assuredly though, in terms of story too, from crippling self doubt and questioning to self  acceptance and anger. More in a later review. I'm very glad to have signed up to Nichols' subscription service, something you should look into.
Not much to say about Sam Alden's work (I think he's exceptionally and genuinely talented)- it's brilliant and clever and rewarding both from a superficial and deeper reading. It's also all online and free to read here. I was lucky enough to be able to get a copy of the limited print run, with a sketch, no less. I may not really see the point of signed stuff, but I can certainly get on board with gorgeous drawings! 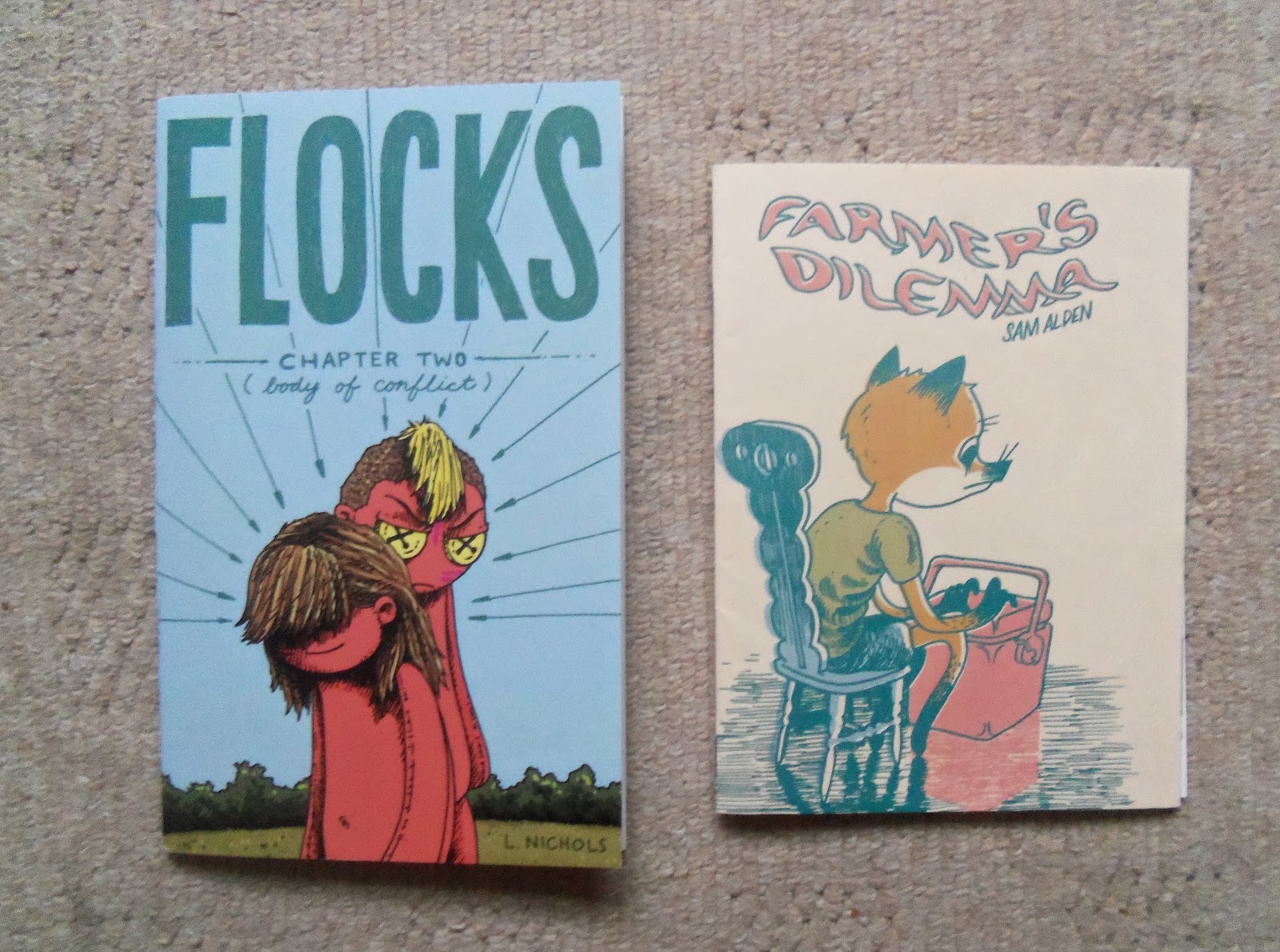 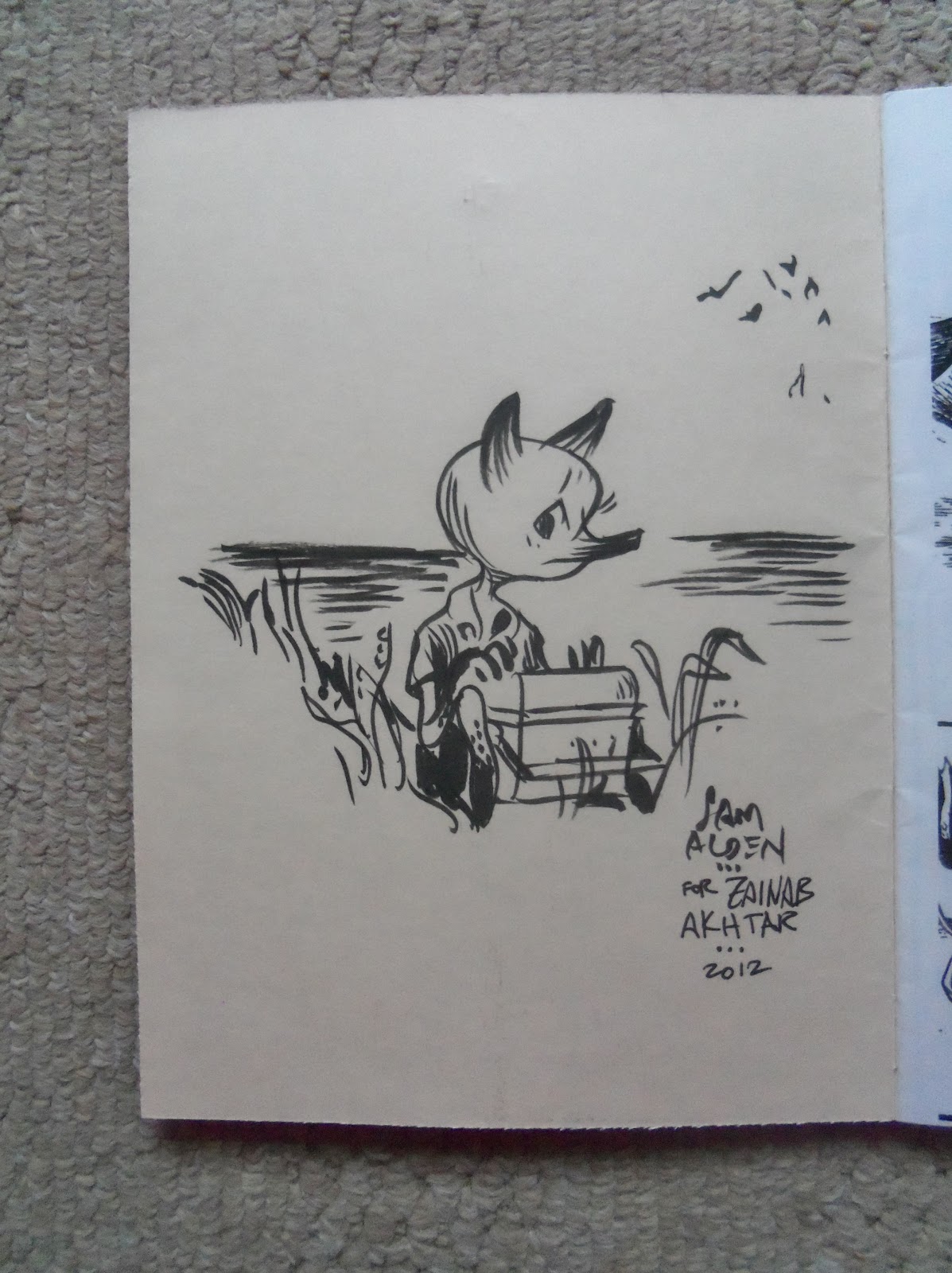 I am woefully behind on some things- I don't really understand how people bemoan a lack of good comics. Anyway, I had no idea Spirou was being translated, but it is, by the excellent Cinebook, purveyors of ligne claire, so volume the first, by Tome and Janry (the books are produced by a variety of creators), has been procured and installed on the bookshelf for future reading. My first ever kickstarter turned up today- a reprint of Kazu Kibuishi's first comic, Daisy Kutter: The Last Train. I'm yet to find something bad to say about any of Kibuishi's work, which is all well and lovely, but also slightly annoying. 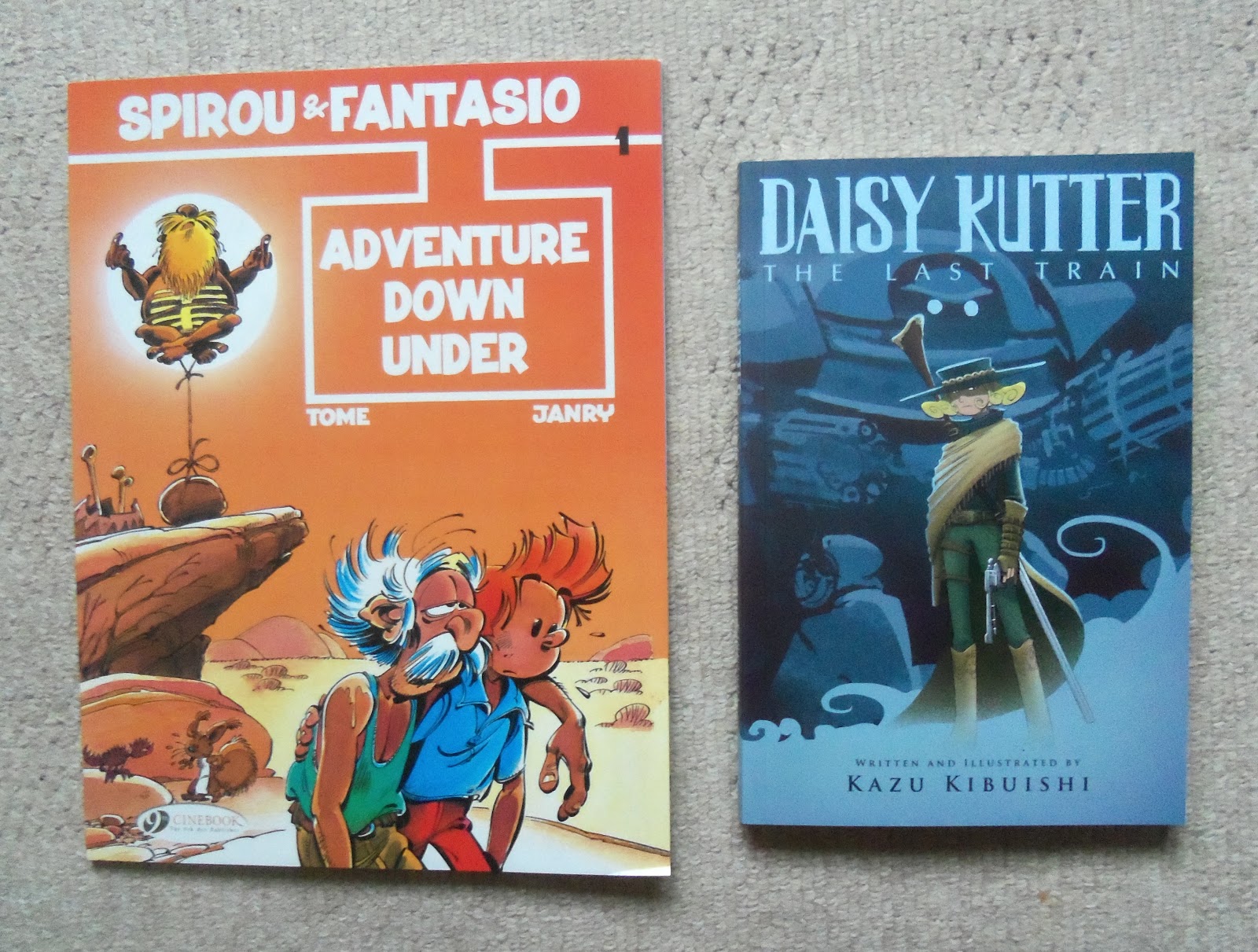 And finally, the two books I'm most excited about reading. Going to try and squeeze in these before January as I have a feeling they could both be best of year contenders. Barrel of Monkeys, the Angouleme winning comic by Florent Ruppert and Jerome Mulot is now available in English, thanks to Bill Kartalopoulos' new publishing imprint Rebus Books. The manifesto for the site states a mission 'to publish books of comics and other works of visual exposition that implicitly explore and reveal the expressive possibilities of the comics form' and this certainly appears to do just that. Ruppert and Mulot are one of the few creative teams I've heard of who collaborate on both the writing and illustrating of their work, which sounds fiendishly difficult to execute. Having had a quick flip through the book, it looks pretty seamless (and so inviting)- their styles must be very similar.
Funnily enough, there's a nice little endorsment from Lilli Carre on the back cover of Barrel of Monkeys, which leads us to rather handily to Carre's own collection of short stories, Heads or Tails, published by Fantagraphics. I believe this is a mixture of old and new work from the past five years. I know I call things pretty a lot, but take a look at these preview pages and tell me they're not beautfiul, you liar. 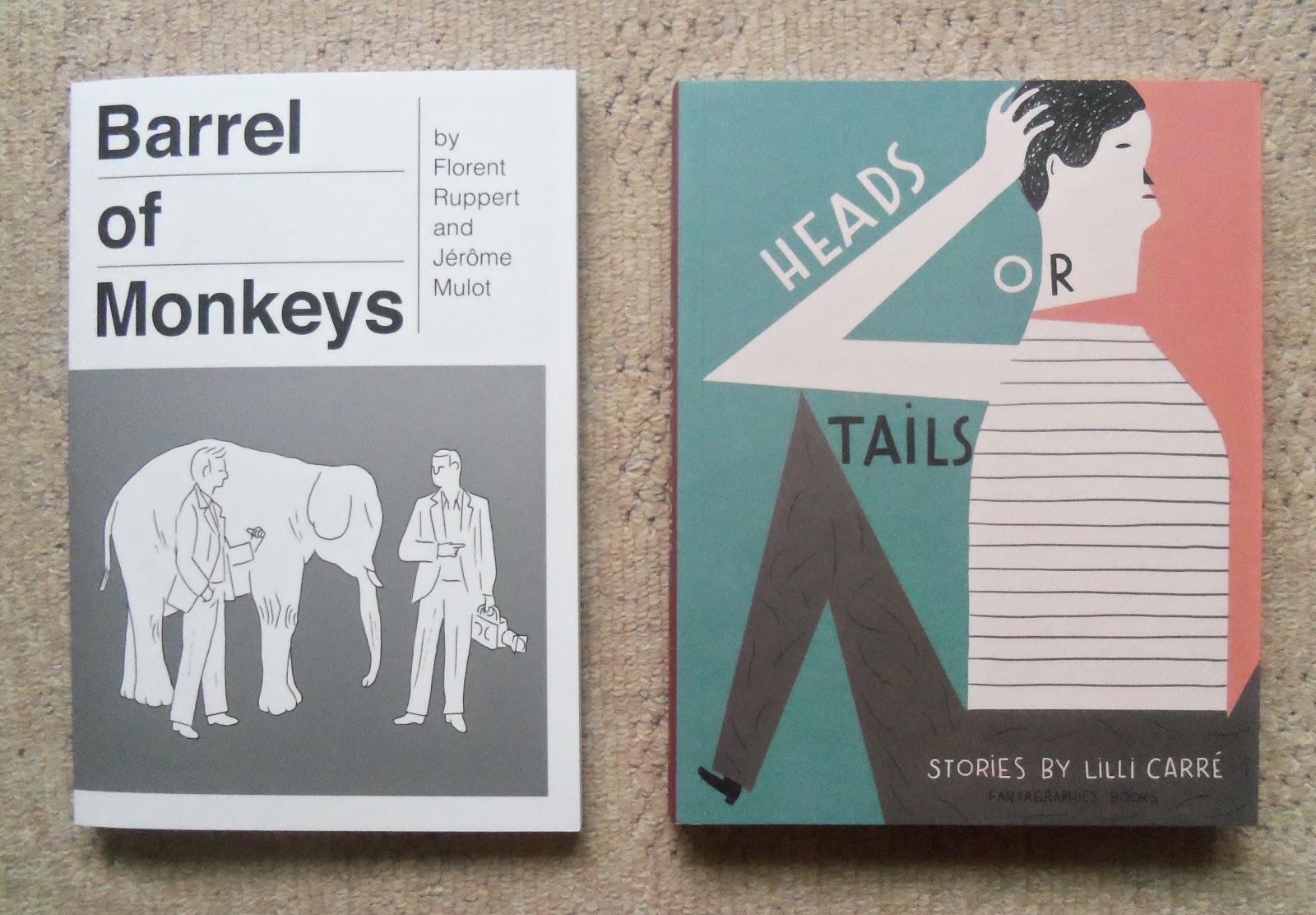