Hello, I've decided the best time to pick up blogging again is here, right at this very moment, whilst I'm working 26 hour weeks, with 6 assignments and a group presentation due mid-May. But DON'T WORRY (you weren't). Fail or pass, I aim to do so as mediocrely as possible. To be honest, I just miss being able to take shitty pictures of what comics I'm reading slapped together with some sloppy writing and then shoving it in your face and going 'HERE'. It's an acquired taste and I have acquired it (along with pepperings of capitalistion for emphasis: blame John Allison- I ain't taking that bullet). 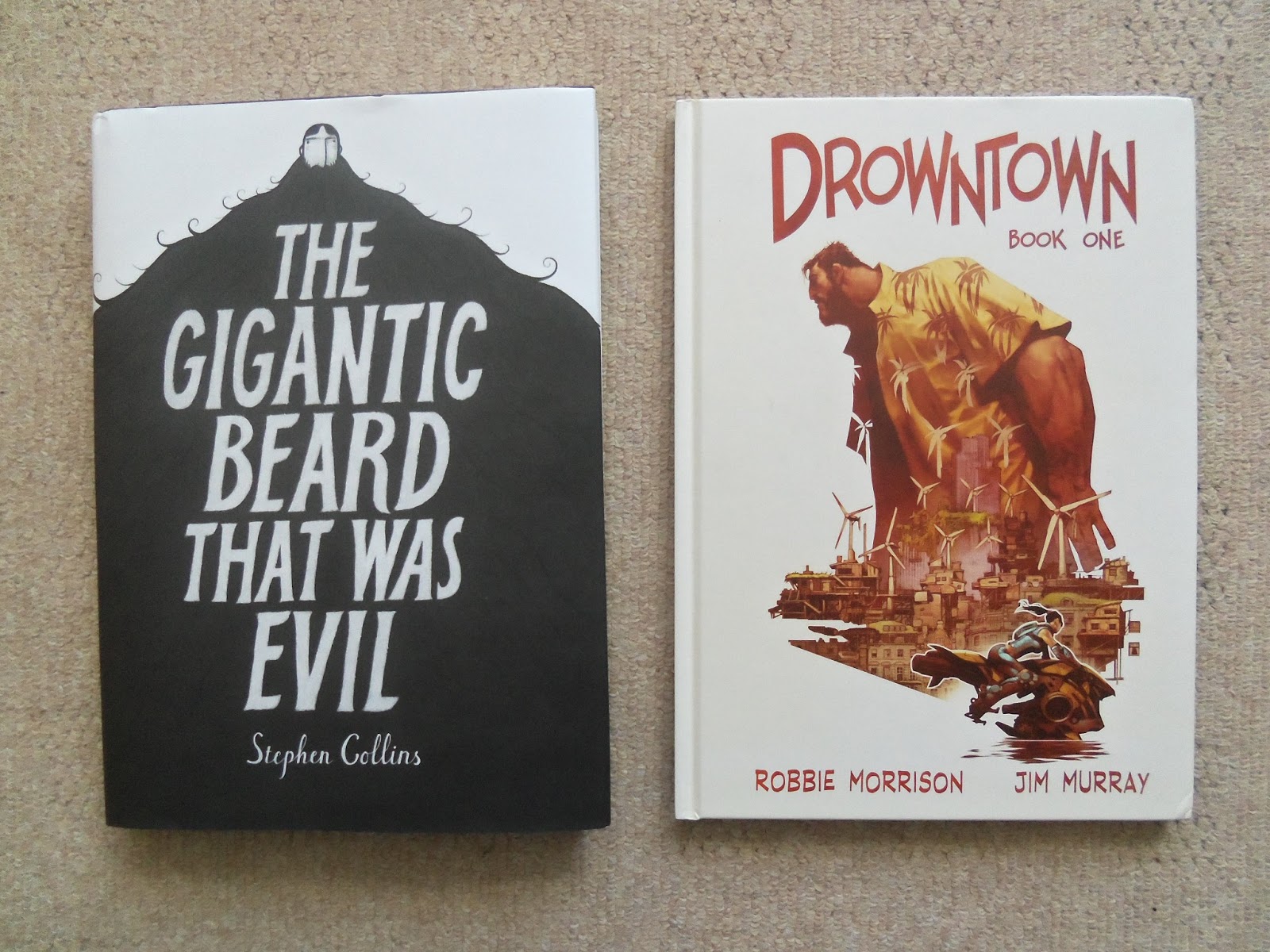 Jonathan Cape sent along two of my most anticipated releases of the year: The Gigantic Beard That Was Evil by Stephen Collins, and Drowntown, written by Robbie Morrison, and rather stupendously illustrated by Jim Murray. Neither book disappointed. Collins' book will go on to be a classic, I think. Two things: 1) it reminded very much of Raymond Briggs in its combination of surreal and real and social melancholia and 2) the sheer amount of different panel layouts, sizes, orientations, etc he uses is staggering and yet it reads like a dream, never feeling obtrusive or forcibly experimental.

Drowntown could have been tailor written for me: bull-headed private eye, future set sci-fi with genetically altered talking animals living alongside humans, a steadily drowning world= I can't imagine a scenario in which I would dislike this book. But Jim Murray's art is everything here: I'm not even going to attempt to describe it (I'm going to give it a stab when I review it, so it's unfair I should butcher it twice), just trust me and buy this when it comes out in June. 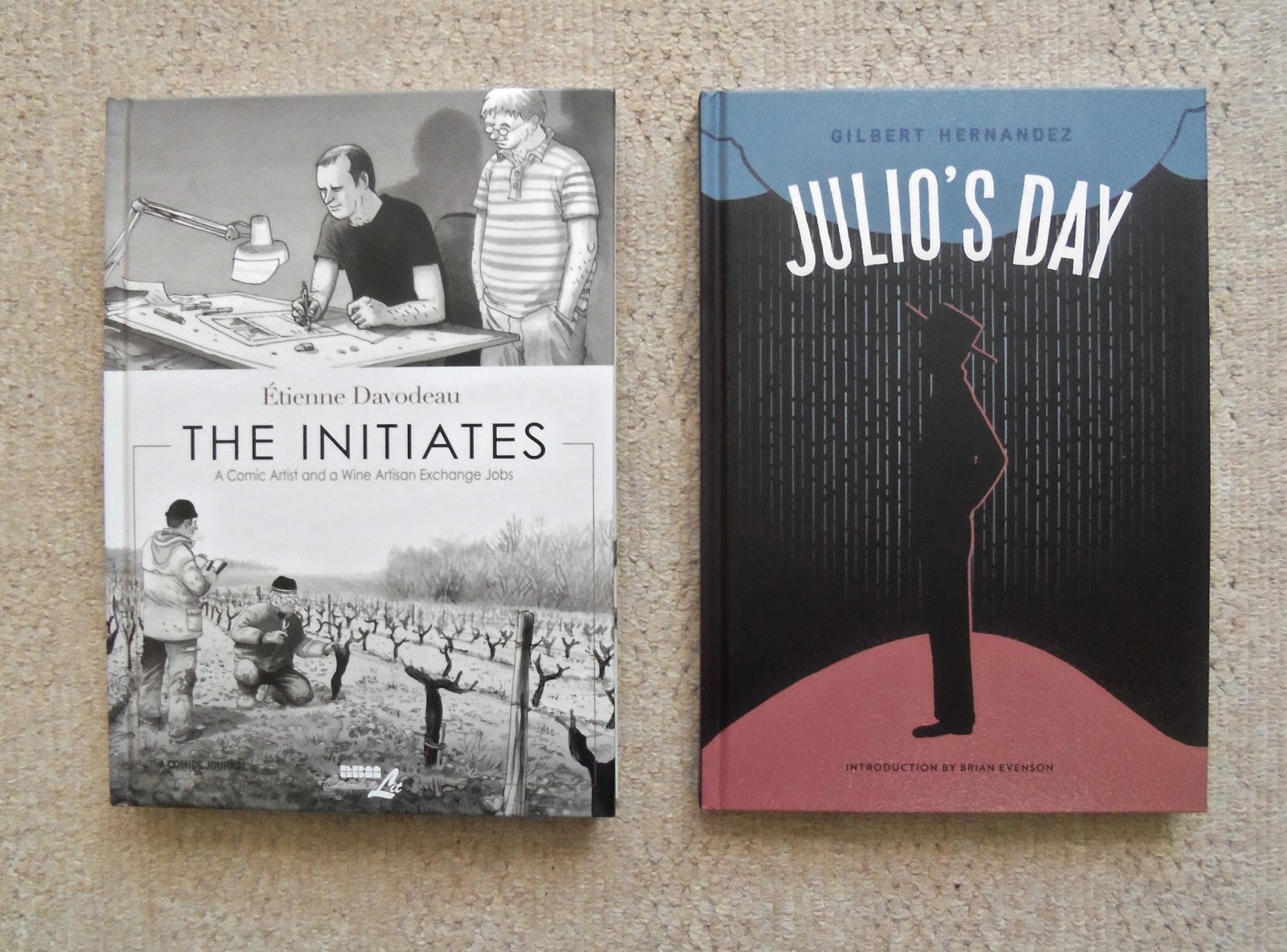 A couple of books from Turnaround: The Initiates by Etienne Davodeau and Julios' Day by Gibert Hernandez: not read either of these yet. The Initiates is about a wine-maker and a cartoonist swapping jobs for over a year and sounds lovely all round. Julio's Day has been roundly praised everywhere, but  I've still not been able to get into any of the Hernandez brother's work; we'll see how this one goes. 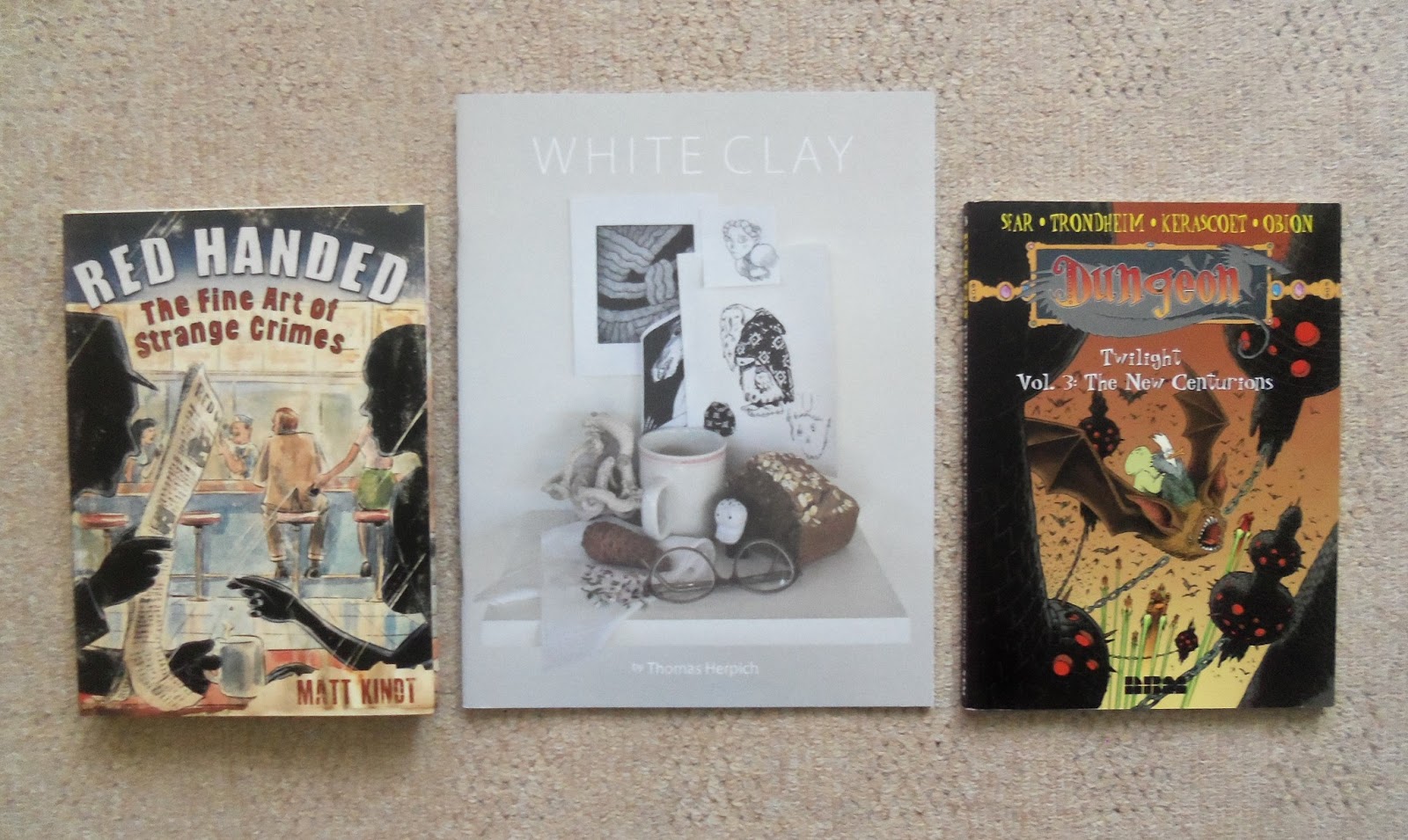 First Second sent over a bunch of their releases, reviewed Lucy Knisley's Relish at The Beat and Odd Duck over at FPI: for me First are one of the best comics publishers out there at the moment in terms of quality comics, beautifully produced, with a wide appeal: you can tell a whole lot of hard work goes on in those offices, and it shows. Anyhow, Red Handed by Matt Kindt, is fantastic and really cinematic in feel. Featuring a mercurial detective with a 100% solve rate, a series of weird crimes in the city leave him suspecting a bigger play. Kindt does a very clever and unusual thing, where the detective is at the heart of this story, yet we never get to spend time with him, always seeing him through other's eyes, newspaper articles, TV clips. It's a great, great book.

White Clay by Thomas Herpich and the third volume of Dungeon: finally picked up White Clay in Travelling Man- Adhouse books take a wee while to get to the UK- this was released late last summer, I think. Dungeon I nabbed for 70p in the TM sale, read the first, not read the second, but at that price it would have been offensive to leave it and I intend to get them all anyway. 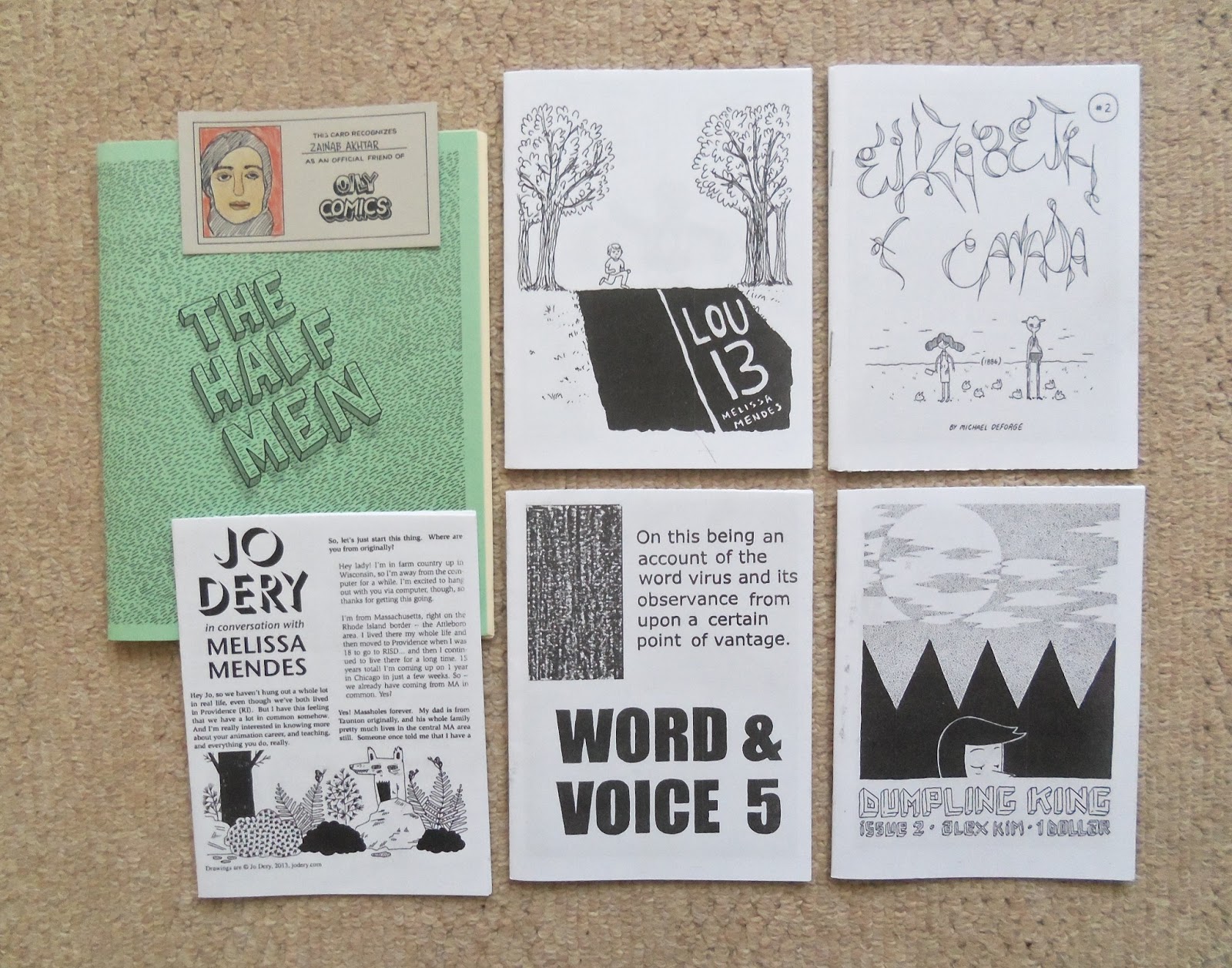 The Half Men by Kevin Huzeinga, Oily Comics April package: which gives me issue 13 of Lou, so of course I'm going to have to buy all the previous ones- I see what you did there, Oily. Also contains my first Michael DeForge comic, Elizabeth of Canada #2. 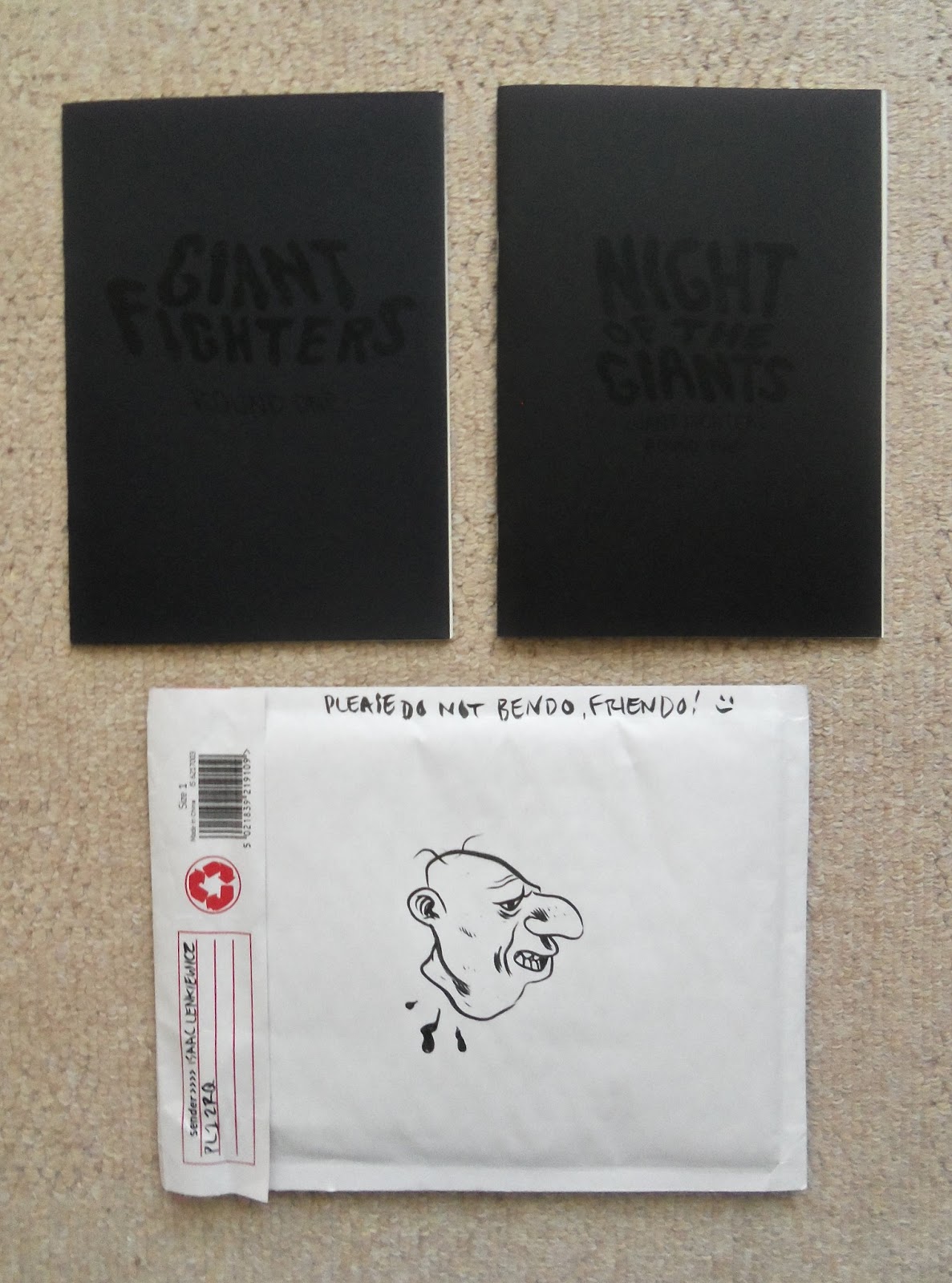 Giant Fighters and Night of the Giants by Isaac Lenkiewicz : I love the amount of detail that Lenkiewicz puts into the production of these self-published comics: spot glossed(?) skulls and silhouettes and little drawings really makes it feel special. Also dude draws giants/goblins SO WELL: all gnarly and slow and ponderous (ponderous may be stretching it, they're pretty thick). Look, I don't know about brushes and pens and lines and things, but I'm gonna waffle on about these and Lenkiewics' art in another post:  I came to his work via his Broadbright story in Nobrow's 17x23 Showcase, but I love his minis the best: they're much more expressive and flowy and characterful. I like that people recognise his talent and he's busy with projects and books, but I'm just greedy and I want more comics like these. If you haven't checked out his stuff, you really, really should. Really. 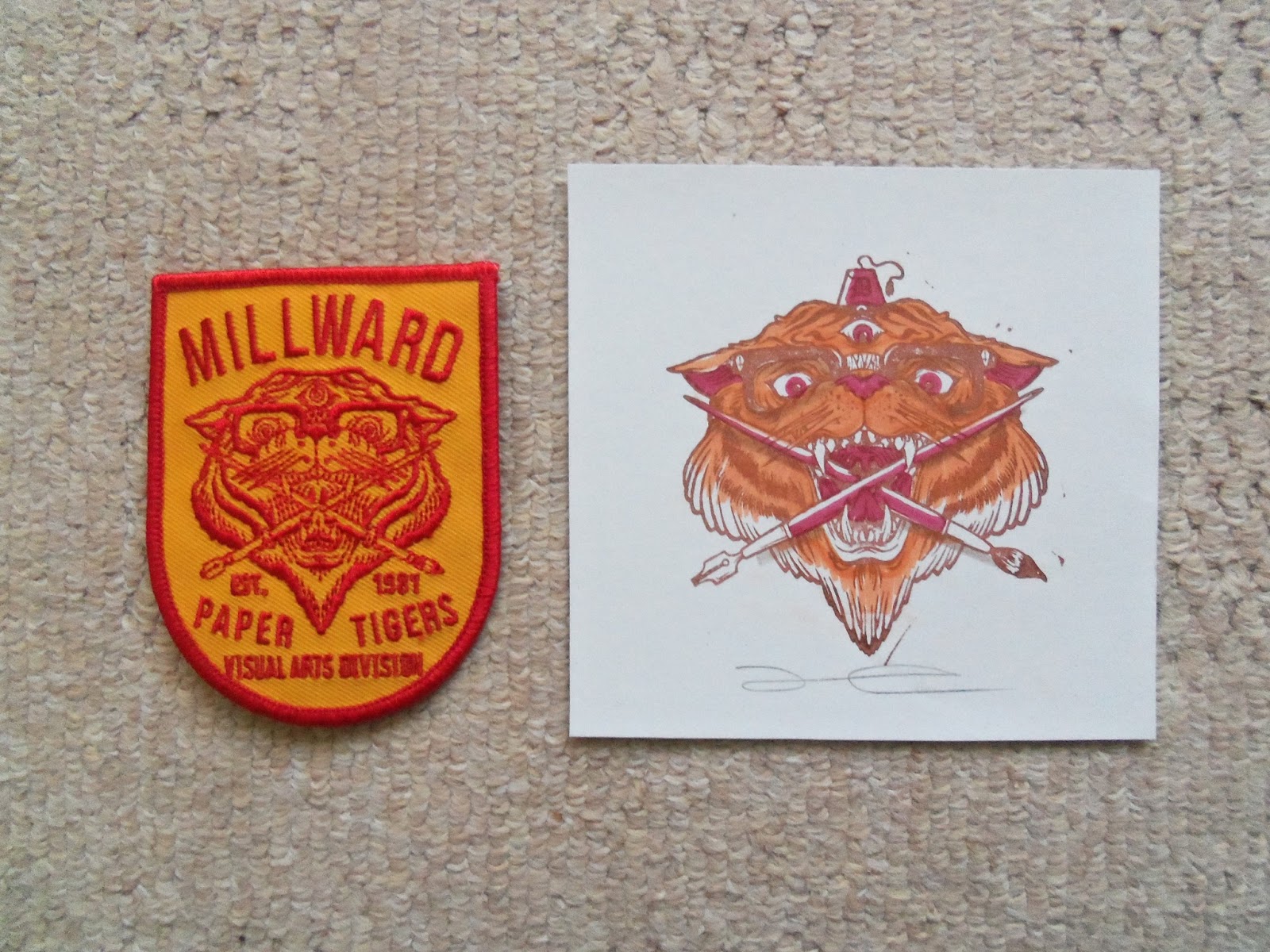 Patch and illustration by Drew Millward: gonna give the drawing to Andy if he behaves himself. Maybe.

It's been rad: I'm off to write a bit more about prison libraries  but I've almost finished a write-up of the new Printed Papers magazine/journal from the dudes of It's Nice That, so if you're interested, it should be up by Wednesday at the latest.
Posted by Zainab at 13:43