Nobrow 8 Hysteria: all shook up 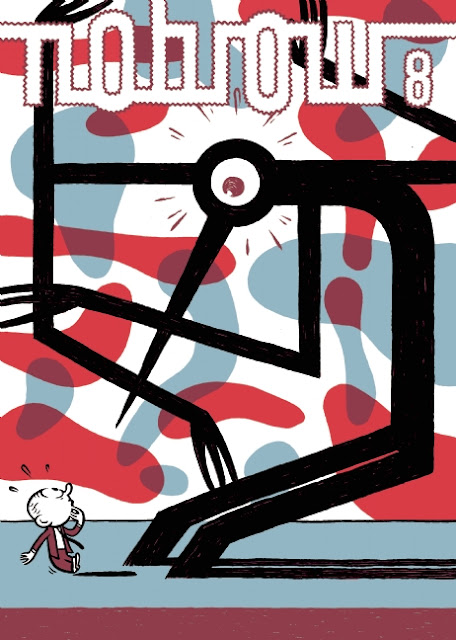 Here we go then: the lovely smelling eighth volume of Nobrow’s titular anthology, packed this time with comics and illustration spreads of a hysterical nature, hotly anticipated by myself due to the lofty standards set by its Eisner-nominated predecessor.
One of the complaints I hear most often about Nobrow is that it tries to do too much: the illustration, the comics, the theme which ties it all together; it can be bitty and abstract, and that is sometimes true. I’ve never found it to be a problem: it’s always stuffed with interesting, quality work and while contributions are linked together by an umbrella theme, it’s not really the kind of text that’s supposed to read as an overarching narrative. But themes schmemes. The thing that I find irresistible about it is the sheer volume and variety of material on offer: a kaleidoscope of art styles, ideas and approaches: I understand how that could be seen as a weakness or overwhelming, but I think it gives it depth, making it one of the few publications that truly lends itself to multiple readings. Yes, sometimes it feels more cohesive than others, but it’s only ever let down when the ration of bad contributions to good contributions is skewed. Generally, it WORKS.
Hysteria works.
The illustrations are more visceral and indelible than the comics, perhaps because the concept of hysteria is more associated with a snapshot of a single, extreme moment, which better befits interpretive illustration. It’s there in Emannuelle Walker’s crazily neon patterned elephants, it’s there in Markus Farber’s overly stuffed, pill-swigging, innard-exposing, geometric shard totem man, it’s there in Rebecca Dart’s intensely focused, frenetic pile of warrior women, it’s there in the incessant zealous chatter of Vincent Mahe’s religious figureheads. The illustrations have one shot to grab attention and convey their message, and boy, do they take it: succeeding in eliciting an instant emotive response from the reader. The comics operate a little differently; more ponderous and conversely not as immediately powerful. The ones that that work best are similarly sparsely worded: Karine Bernadou’s great opener, which manages to infuse the zany vibrance of the illustrative side, as Hysteria herself tries to take a a break from it all, Dustin Harbin’s interchangeable animal-head popping suit is delightful: beautifully drawn and executed- the pace of the switches, the gradual increasing hysteria and the perfect burst of the eventual punchline all just wonderfully done. Zack Soto’s  sweet, overtly theatrical space opera is another highlight: I’m a real fan of his colouring- an almost light phosphorescence and neon, and I love the blend of translucence and cartoony he achieves in his art- it’s almost ethereal yet simultaneously dynamic. Jose Dominga’s contribution is word minimal and effective: the brash repetitiveness of the rude red  ’blah’ everywhere, crowding the page, until both reader and character find an eventual oasis of escape. Dilraj Mann’s collaboration with Laura Halliwell is the undisputed comic pick here: perfectly nuanced in detail and tone- the blue tones and washes, the swollen, sullen lips and attitude, the suddenly awkward voluptuous bodies and the cruel  nature of teenage girls. Something in the way he draws faces and features here is strongly reminiscent of The Simpsons: small plump lips, tapering chins, quizzical eyes.
There are some mis-steps: Matteo Farinellas’ The Wandering Womb is as bad as it sounds: neither incisive or witty and Kyle Smart’s Hysteria Limited misses any sort of mark, but overall this is another brilliant effort from editors Sam Arthur and Alex Spiro, with simply too much goodness to list or miss: pick it up.