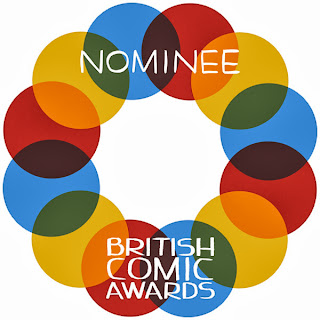 I was pretty chuffed to be asked to serve as a committee member for the British Comic Awards this year, and after reading a tonne of comics and participating in 17,659 email threads, my fellow BCA peeps, Tom Humberstone, Richard Bruton, Clark Burscough, David Monteith, Stacey Whittle, Mel Gibson, Ian Hague, Vicky Stonebridge and I, have come up with a shortlist of nominees which will be put forward for the consideration of the judges.

The awards have 4 categories: best comic, best book, emerging talent and the young people's comic award. We also choose an entrant for the Hall of Fame, which this year will be awarded to the legendary  Leo Baxendale, creator of Beano strips such as Bash street Kids and Minnie the Minx. The Young People's Comics shortlist is forwarded to a variety of participating schools around Leeds and Yorkshire, and a winner will be chosen by the best people suited to judging comics for children: the children themselves.

It's been an interesting experience being on the committee, and being privy to the many issues it throws up that you probably wouldn't even consider if you weren't actually taking part, but what's been most impressive has been the sheer amount of very good UK comics- hugely encouraging to see. I can genuinely say that I'm very, very pleased with the shortlist we've produced. I'll write a more in-depth post about it once all is done and dusted, as is proper.

UPDATE: I meant to thank Adam Cadwell, who is the founder of the BCA's and a pretty solid dude all round- the awards takes a huge, huge amount  of time, effort and organisation and a whole load of other nitty gritty things which I'm probably still not aware of and he does a sterling job.


The awards ceremony and announcing of winners will take place on Saturday 23rd of November as part of the Thought Bubble comics festival. You can visit the British Comic Awards website here (from where the above book images have been shamelessly pilfered- sorry Adam!).
Posted by Zainab at 12:23