On Saturday I worked my first full day at OK Comics, which, for those of you who don't know, is a great little comics shop in Leeds. Over the course of the day, I came across a few books on my endless 'comics I must get around to buying and reading' list and amassed a small pile behind the counter to buy at closing (hey, staff discount!).  I'm drowning in comics at the moment, to the point where I have piles of unread books(!) dotted around the room, but these are the older ones that have been out for a while, which I'll be coming to first. 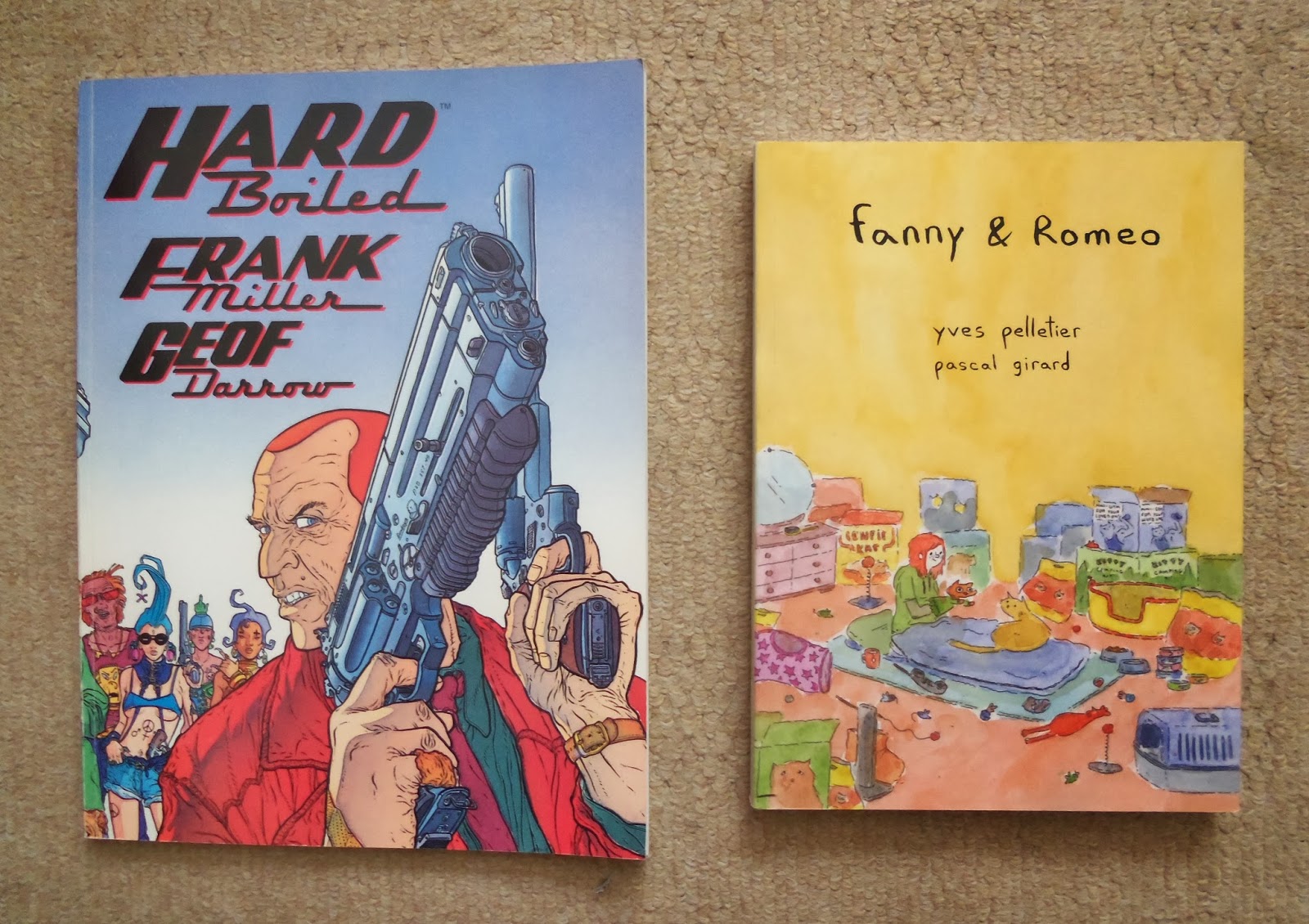 Hard Boiled by Frank Miller and Geof Darrow, and Fanny and Romeo by Yves Pelletier and Pascal Girard: I guess I'm one of those people who will buy books on the strength of interest in an artist I like, because that's why I picked both of these up. Fanny and Romeo is an English language translation of the French-titled Valentin and was published by Canadian small-press publishers, Conundrum Press, last year. It's about a young couple, Fanny and Fabien, and a cat called Romeo who comes in between them (he's allergic, so she rents the cat a separate apartment).

I really love Pascal Girard's illustrations; his lines and watercolours are so laid-back and breezy and cool (you can follow his Tumblr here, it is a small joy), and yet so characterful. Girard does a lot of observational people drawing on his Tumblr, and it's interesting to see how few people draw those kind of illustrations in the manner he does, a sort of retro-louche style that's reminiscent of British children's books illustrations. There's something almost comedic about them, I think. The majority of observational people drawings that I came across are  usually rendered in a more cartoony style leaning towards anime or the more traditional, sketchy, 'arty' serious portraiture, like Nick Aabadzis' subway illustrations.

Sometimes I feel like I know quite a bit about comics and then a gap in my knowledge will make me feel really stupid about that assumption. For example, I've never come across Geof Darrow's work before and it is bloody balls-out amazing. Hard-Boiled contains spreads like this: 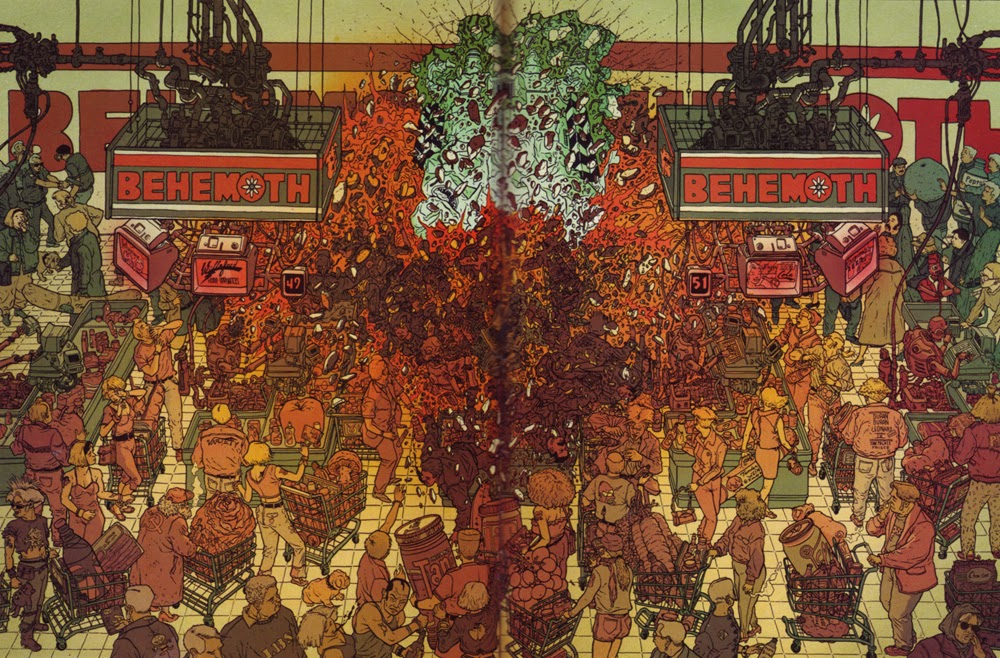 Jared also pointed out the amazing sequence towards the end which is set in a scrap/junk yard, with two characters having a conversation over the course of several double page spreads. Darrow's done this fantastic thing where you can tell the inches they're moving as they're talking, because the background has slowly changed and moved along with them. So the car with the popped hood which is in the middle of a spread on one page has shifted towards the left on the next, revealing more of the surroundings on the right. Sort of like a giant flip-book, but not. He also does that thing that Moebius and Otomo do, with lots of little dimples and wrinkles in everything, so a man with a trench coat, shirt and trousers has lines, lines, lines everywhere, including his face, giving him the appearance of the most creased, crumpled and weather beaten guy ever (there you go: I have just revealed to you the secret of legendary comics artist status- add lines and dashes to everything). Texture and depth overload.

I'm not a fan of Miller's narratives (and this story about an insurance investigator, tax collector, and robot being the same entity doesn't really appeal), but Darrow's artistry is unignorable. He works on comics intermittently in between film employment and is refreshingly honest about his desire to make well-drawn, action packed comics (though much of that is humility), and I'm guessing it helps when you can draw like he does. He also has his first comic book in a few years releasing next month from Dark Horse: a new Shaolin Cowboy mini-series. 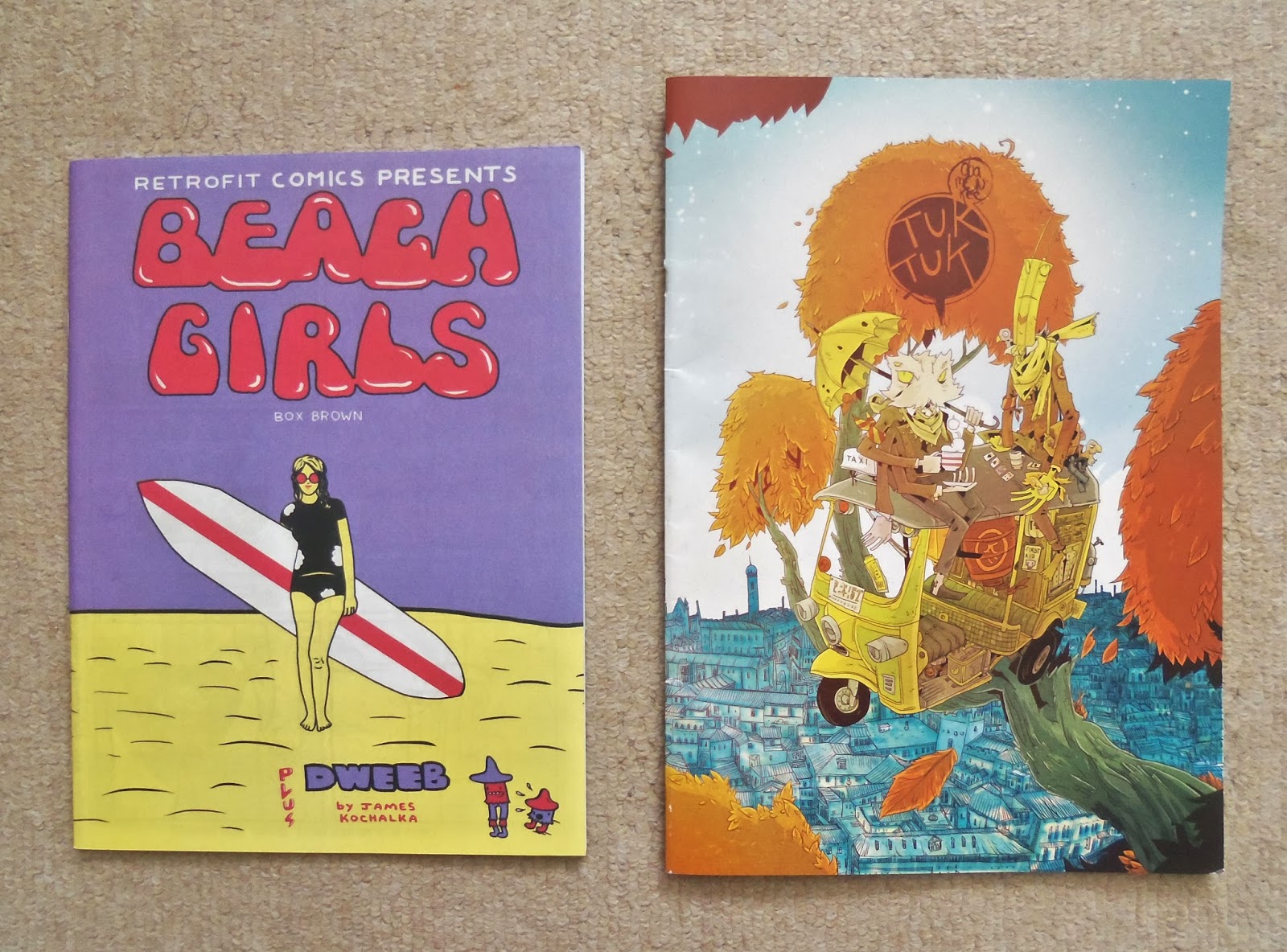 Beach Girls by Box Brown, with an additional story by James Kochalka: this is the newest comic on this list, which I bought from Impossible books, along with 4090 and Comics Class. I've grown to really like Brown's simple art, especially his figure drawings: the women he draws always look fantastic, no stupid proportions or rail thin skinniness, just realistic depictions which seem so attractive as well as aesthetically pleasing in terms of style. And varied in body-type too. I'm becoming increasingly obsessed with packaging (that doesn't sound right), form- so I love Beach Girls 10.5 x 8 inches size, the 44 pages length ensures it's not flopping all over the place, too. Brown and Kochalka's styles complement each other really well. It looks great, here's a quick synopsis:

'Pheobe and her friends are on vacation at the beach, and Pheobe isn’t quite feeling it. Local surfer Hank is hyped about the summer influx of “beach girls”, but also struggling to find his own place in the world. What will they do for each other, and what will Pheobe take away with her?' Tuk Tuk by Will Kirkby: This was released in 2011 and nominated as 'best comic' at the inaugural British Comic Awards; Jared grabbed a few copies for the shop from Will at Thought Bubble, so this one is signed in with a little drawing (there's still one left in the store, if you're in or around Leeds) It's 28 cardboard glossy and has great blurb on the back: 'This isn't a tale of heroism. Nor is this a story of good vs evil. It is a tale of the quiet life and the fools who chase after it...'

Kirkby's a grossly talented artist with imagination to spare, as you can see from the quick pictures I took below, and this just looks so, so good. If you like word-building and intricate drawings, quirky adventure or maps, you can (and should) buy a copy of Tuk Tuk here. Kirkby also posts art on his blog , which you can see here (this, in particular, is amazing). I know he was weighing up his options between getting the second issue of Tuk-Tuk finished by the end of this year, or making a new mini-comic in time for Though Bubble, so either way, more superb comics on the way soon. 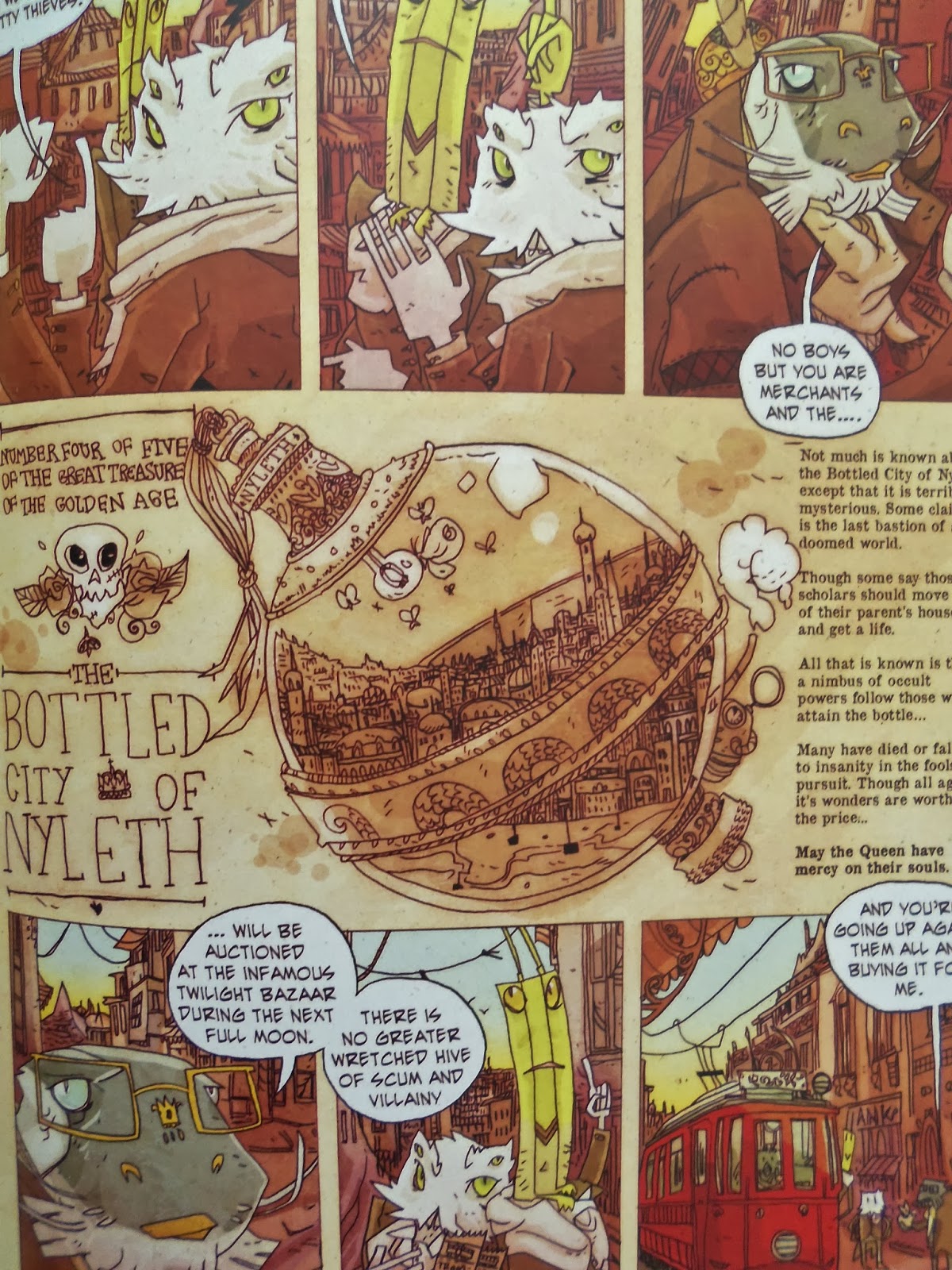 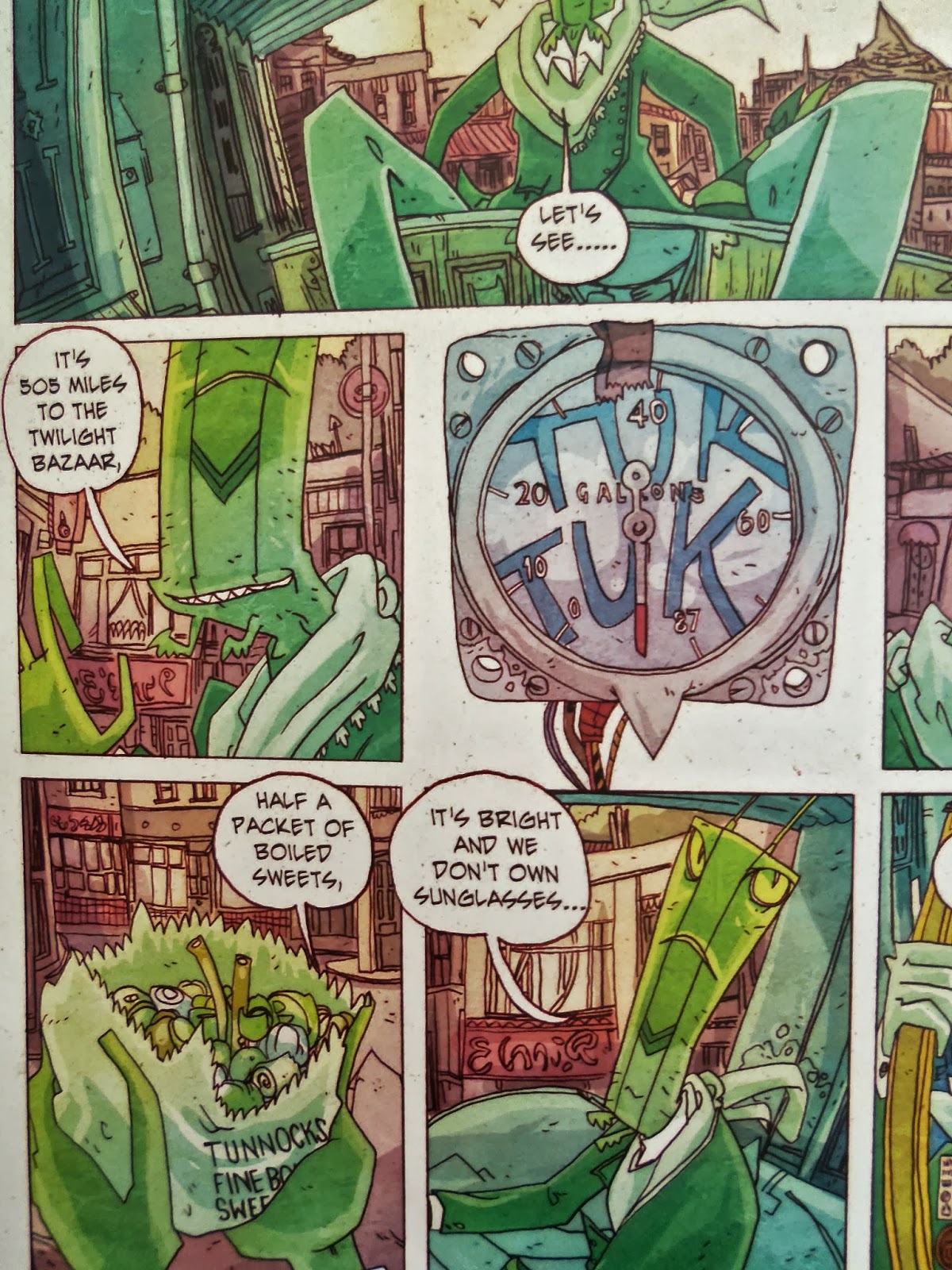 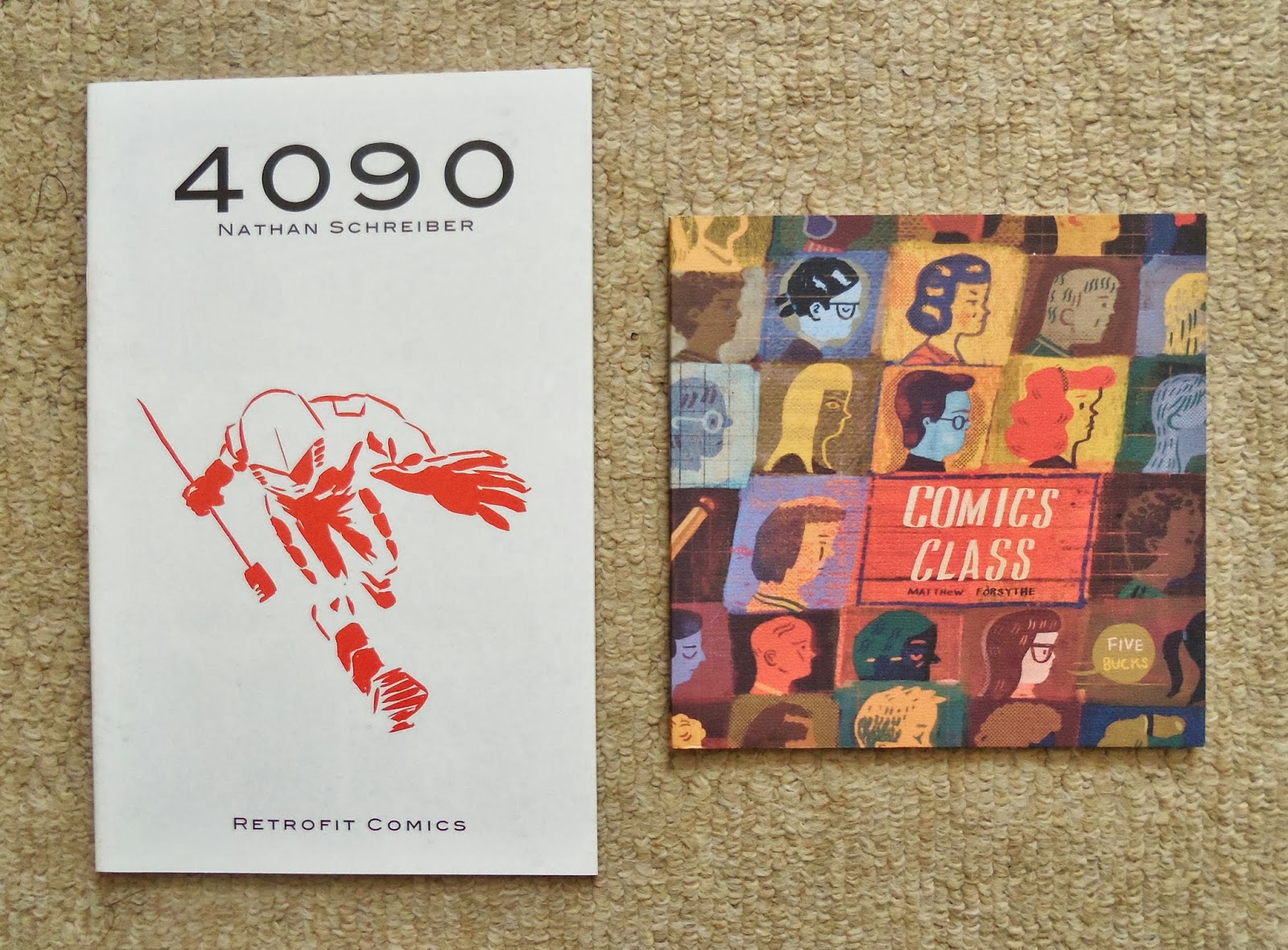 4090 by Nathan Schreiber: I'm kind of warming a bit more towards the (small) minimalist approach in comics, but I'm not sure that's what I'd call Schreiber's artwork in here (when I hear 'minimalism' in comics, I expect more lines and less blacks), apart from a few pages in the middle. The back and front covers are gorgeous, though. This is set a few thousand years in the future with the pesky humans as ever, on the brink due to a  literal poisonous atmosphere of their own making.

Comics Class by Matthew Forsythe: Auto-bio to finish off- yay!  In which Forsythe teaches comics to a class of 11 year olds with varying results. I really like Fosythe's cartooning here, not only is it a pleasing blend of a traditional , but looser styled, coupled with a more detailed anime/manga approach, it has an inherent sweet quality, too. I've been meaning to check out his Ojingogo and Jinchalo too, both of which look incredible. Forsythe's currently lead designer on a little cartoon called Adventure Time, so no idea when he'll be bringing out more comics, but definitely look into the ones he's already done. Again with the from, Comics Class is a tiny square of a book- 5.5 inches all round- that fits nicely in your hand.