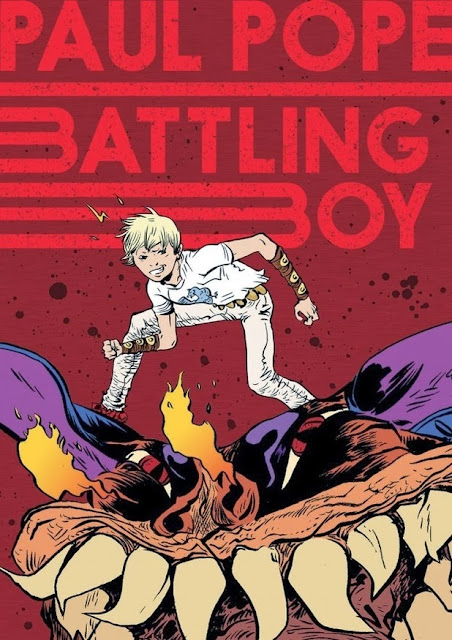 I read Battling Boy about 2 months ago, and have been watching the positive reviews and responses to it roll in with interest, largely because I thought there were a few fundamental flaws with the book which just didn't allow it to work. The plot, roughly, follows a 13 year old god-child being dispatched to the Earthly (or Earth-like) city of Acropolis to complete a coming-of-age ritual called the 'rambling'. Acropolis is a city plagued by monsters of all kinds- huge, munchy, toothy ones, sinister, kidnapping humanoid ones; no-one knows where these monsters came from, simply that they began appearing one day, and have grown steadily ever prevalent. It's Battling Boy's task to rid Acropolis of it's unwanted citizens and return home to his planet a triumphant and more experienced man.

Here's the thing: the book opens with a 20-odd page prologue of sorts which is far and away the best part of the whole comic.  Publishers First Second released this as a preface issue, titled 'The Invincible Haggard West', a scientist hero who dies fighting against the sinister, cloaked, child-snatching creatures led by the mysterious villain Sadisto, and orphaning his daughter, Aurora.  It's a really strong opening, where everything is considered, tightly written and well-realised; Haggard West's brief, shining rally roots him as heroic: caught forever in that moment of fighting the good fight. Aurora is similarly solidly characterised, intelligent and smart, her grief acutely observed over a taut segment of pages - angry and reactionary in the first instance, but level-headed enough to acknowledge the wisdom in patience, preparation and the right time, as she is left considering her father's armory and his many secrets. Similarly, the lithe, curiously bandaged child-nappers are effectively designed and genuinely creepy.

The problem is that when Battling Boy is introduced, his narrative just doesn't match up in levels of interest or engagement. As a reader I became quickly invested in Aurora and her story, and the change to BB's character is flat and without impact. And it isn't because he's a child whose personality is still in flux, forming, nor is it because he's a God-being and therefore separate and different, at a remove. Those elements could be made to be compelling, but they're not. He's not a deity, he's not human, he's not very much of anything- he needed more personality, some weight or oomph behind him, something. You could argue that he's a kid thrown into a strange situation, but kids react, one way or another. Pope tries to infuse a little humour into proceedings when the bureaucracy of Acropolis latch onto BB as their new hero, giving him a saleable moniker, throwing him a parade to boost public relations, talking about rights, and while knowing, like too much here, it fails to hit the mark  and feels stilted and forced.

The addition of little incongruous things like the gods speaking in formal, ye olde English style, which is fine, but inconsistently rendered, and splattered with colloquial and modern slang. And if Battling Boy is raised in this environment he would speak as his parents do, right? But he speaks like a 'normal' boy. Intentional? Played for laughs? Parody of Thor (with that helmet)? Indicative of a further plot point? It may seem pedantic, but it's a factor that would perhaps be overlooked if the plot was holding your attention, but is instead grating and irritating, affecting the smoothness of reading. 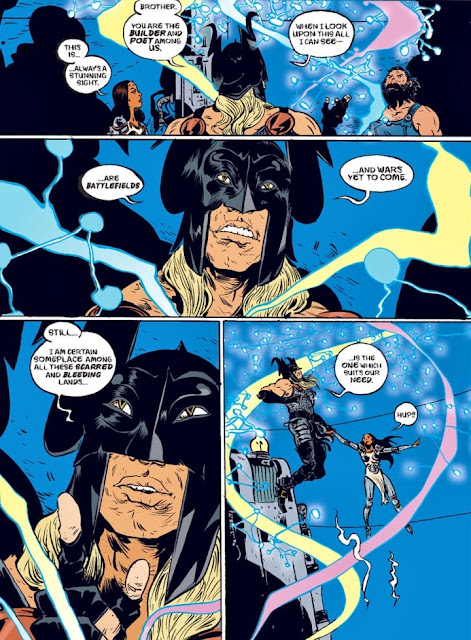 It would be a sorry soul who questioned Pope's ability as an artist and Battling Boy certainly isn't about to change any perceptions in that regard. It's as dynamic and detailed as ever. The thing I've always liked about Pope's art is its very presence, the meaty, sinewy nature it gets across, somehow blended with an aesthetic beauty. Hilary Sycamore's goregous colouring elevates it to another level here; look at the luminous blue/pink/yellow combination in the wonderful page above- it evokes a starry transcendent magic, doesn't it? You can absolutely understand how and why they're floating in that final panel. The monsters are superb too: take a look at Humdada down there in all his eye-balling, nostrilly glory; magnificent- that's what I mean with regards to presence, he hogs and commands the page.

Ostensibly Battling Boy functions as a set up volume, but it's too lengthy with passages that are, frankly, boring, and is unaided by patchy structure and writing. The art is great, but the first book in a series of titles has one very important job, all else aside: it should make you want to read the next one. This doesn't.

On an aside, interestingly, First Second have decided to release a prequel book focusing on Aurora West and her story, which I would say justifies the response to a character who appears in a quarter of a book named after someone else. The 'prequel,' due next July, will be titled 'The Rise of Aurora West,'  and is to be co-written by Pope with JT Petty and drawn by David Rubin. 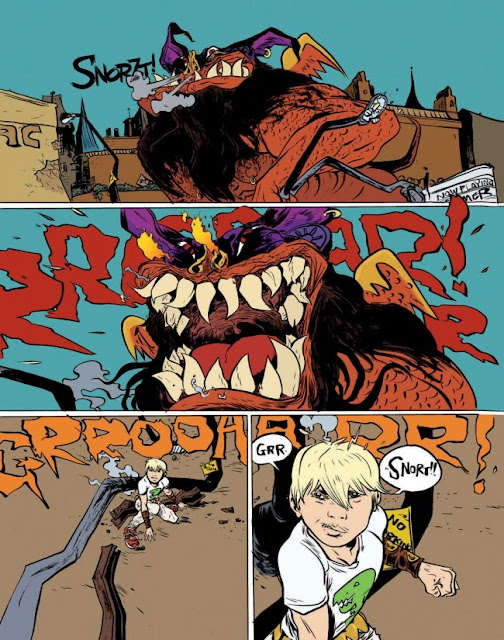