Comics carousel: Parks, backyards, people, places; it goes ever on 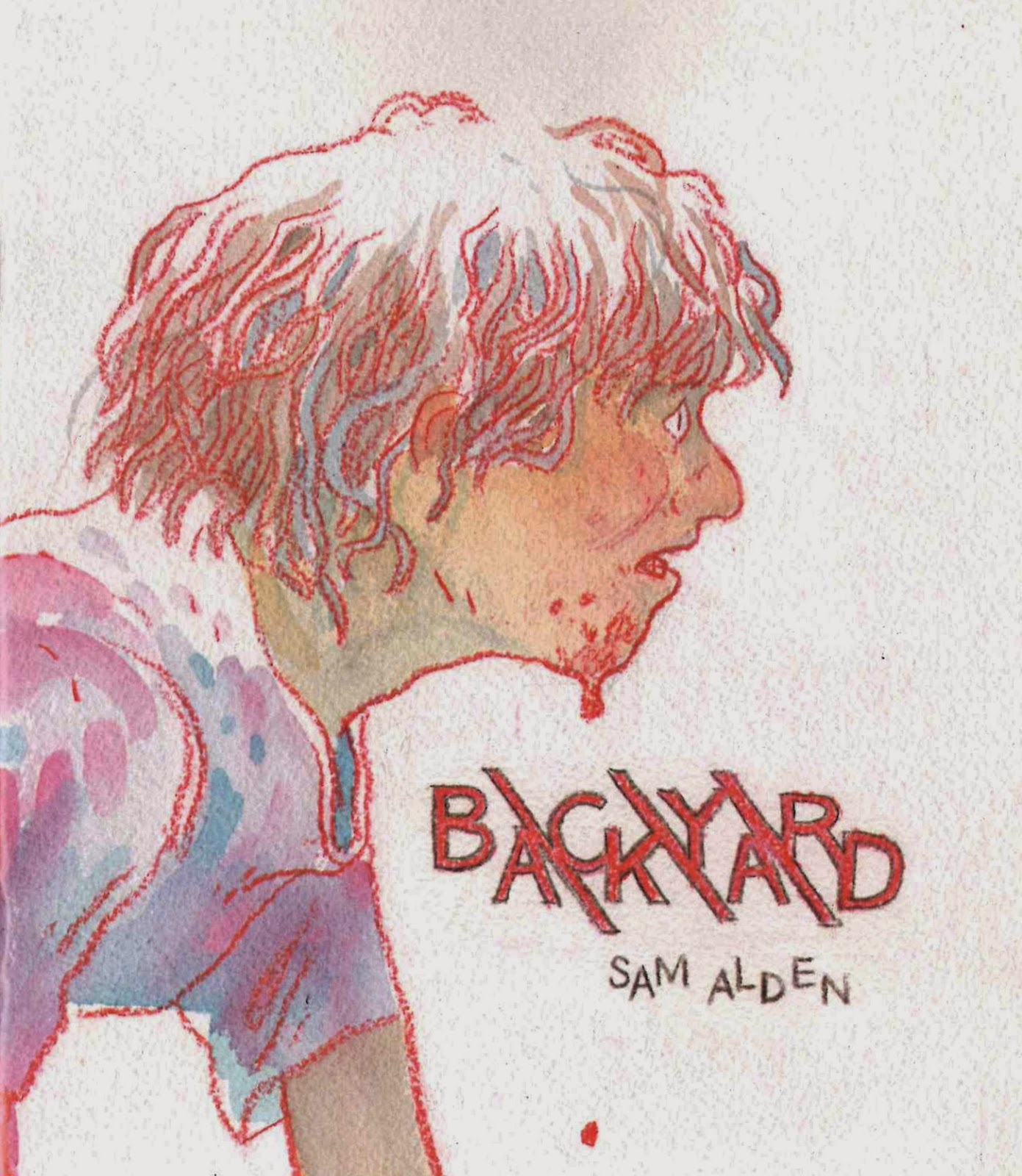 Backyard by Sam Alden, Sonatina Comics: I think my favourite thing about Alden's Backyard is the passive-aggressive, determinedly progressive, horizontal-leaning views of Molly's friends. A few of them share the rent on a house, and a while back Molly decided she no longer wanted to wear shoes, then stopped talking, then started moving around on all fours. Nobody intervened; people do odd things all the time, go through phases, the important thing was not to over react, to be chill and supportive of Molly's journey of self-discovery.

And then Molly began to get a bit messy, so they moved her out of the house into the garden, because 'She just wasn't happy living inside. We're all really happy for her. She's just figuring out some stuff about herself.' Molly's left to her own devices, not hugely in anyone's thoughts or responsibilities. In an icily good scene, the housemates sit around on sofas arguing over money and who should pay for what, while Molly barks at them from the window outside.

Backyard is a scathing, cool treatise on inaction as a form of action, of narcissism, of social duty, of desensitisation and conditioning; even as Molly degresses, her 'friends' are still the scariest things here. Like the best literature, it lights a stack of questions: are Molly's friends self absorbed, or are they right in letting her be? Should Molly be allowed the freedom to do whatever she wishes? And to what point? Should they do something? At what stage should they step in and do something? Who decides how far is too far? When does alternative and slightly odd, or doing your own thing veer into worrying and requires attention?

Alden's pages are alternatively heavily shaded and clean-lined, often stark and sparse when presenting Molly, who in her changed state is the most understandable thing here. Comics is so fucking lucky to have Sam Alden; he is a monster talent, producing work which is fearless, smart, good-looking, experimental and diverse in subject and genre. Why somebody isn't throwing him money to create them full-time is a sad mystery. 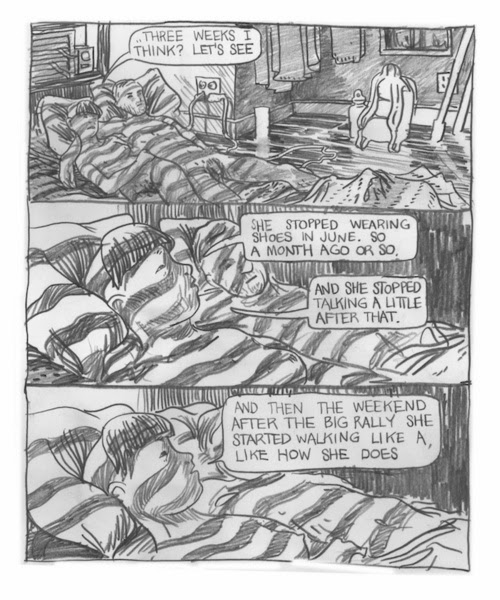 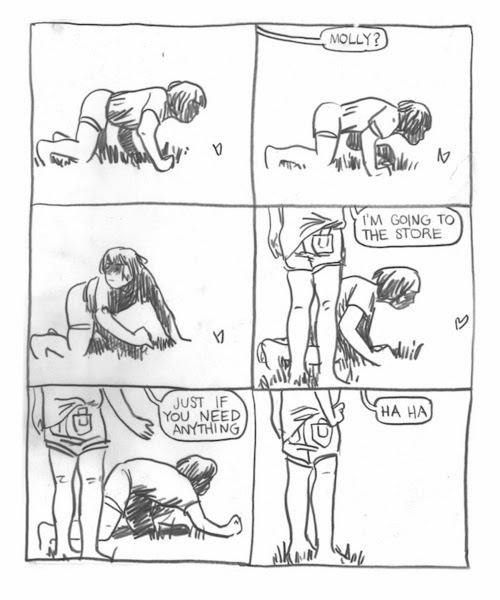 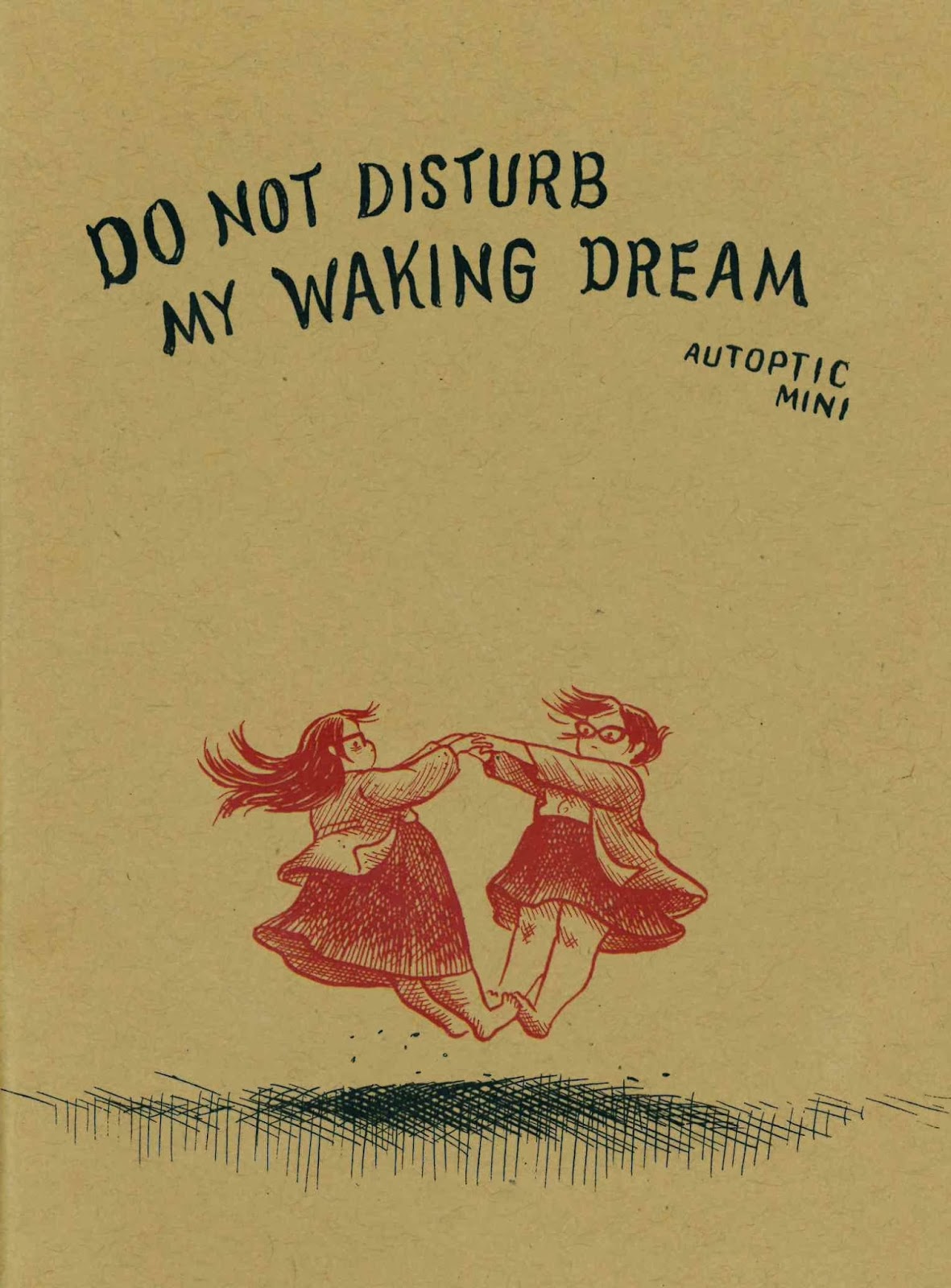 Do Not Disturb My Waking Dream by Laura Park, Uncivilised Books: I go through ebbs and flows with regards to autobiographical comics, but a thing I have found is that those written by female creators are invariably more interesting; nuanced, humorous, varied in subject and tone, and while honest, not deeply self-pitying (Noah van Sciver I exclude from this, he can do whatever he wants).

The autobio comics I've read that have been by men are more inclined towards navel-gazing and an inherent self-involvement which the reader is expected to attach themselves to, where the ones authored by female creators look beyond themselves to others, and demonstrate a greater ability to laugh at themselves. Reader's don't know authors, their interest and engagement is gleaned from associating with a character, their personality, asking people to trade on shared experiences and emotions- and keeping them so insular and singular is alienating. It's narcissistic in the first to expect people to buy a book about you, These are generalisations, of course, but endemic in a strain of comics culture that I would love to see change things up.

Anyhow, Laura Parks' 'Do Not Disturb My Waking Dream' is fantastic. The material is wide-ranging in scope, :from observational comedy, procrastination, nightmares, illness, booty calls, all of which are imbued with intelligence and feeling. One of the things that's pleasing to see is the diversity in strip layout and presentation. For example, a single page carries 3 comics- a six panel horizontal strip, a 2-panel vertical strip and the last one made up of  a 5 small panels, one larger and a smaller 3-panel strip. There's splash pages, a fab 24 panel page which shows the passing of time in a single day, border-less images. She doesn't feel the need to fill a page unnecessarily either, locating a comic at the bottom and leaving the rest of it blank, the variation works to retain an active engagement (look up, look down), whilst the space ensures it's not busy or overwhelming.The variation is refreshing to see, especially in a mini-comic, where too often people tend to stick to more traditional methods, feeling limited by the format, but you know, panels, boxes, space , lines- those things are part of what make comics and they should be played around with. The best thing here though, is Park's drawing style: it's so attractive; her cartooning is charming and expressive, inhabiting this median of being sophisticated, detailed, more illustrative, and characterful. It's a beautiful comic. 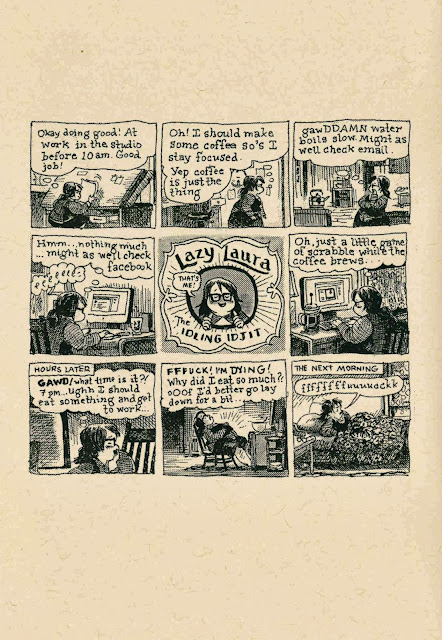 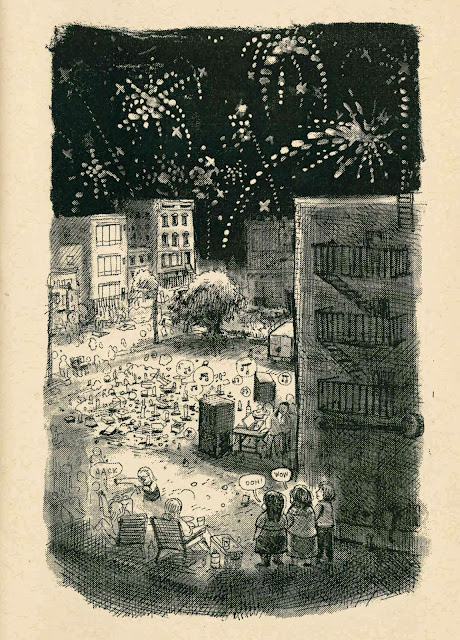 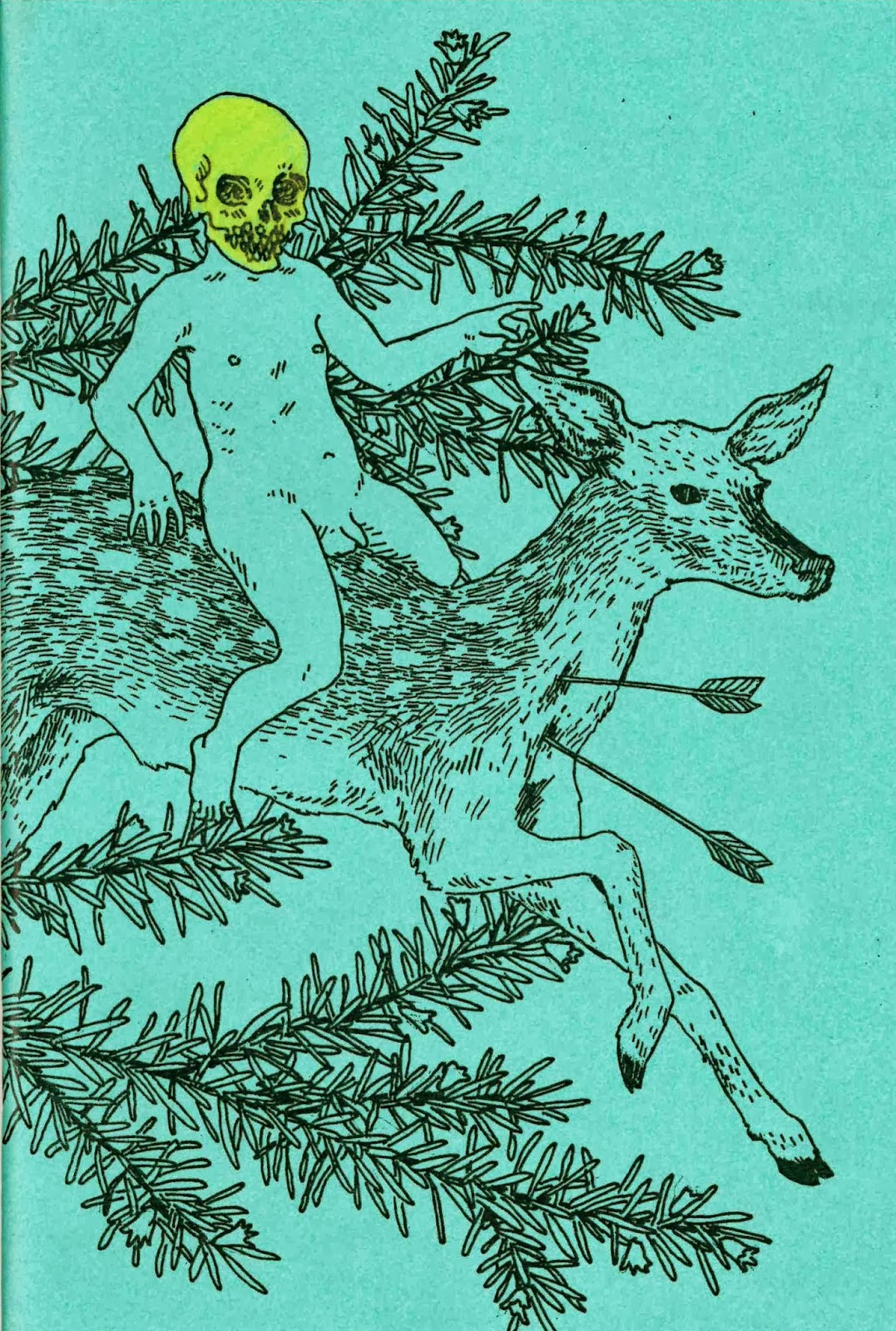 Blacklight by Julia Gfrorer: This collects four short stories, River of Tears, All is Lost, Unclean and Phosphorous. Between them, they explore narratives of a man attempting to deal with the continued attentions of an unstable ex, Gfrorer's take on dark folk/fairy loric tales, a vampire story the way vampire stories are supposed to be: erotic and unsettling, and parental and abusive relationships. It's a lineup that showcases Gfrorer's considerable talents in elucidating certain themes in her work very effectively- the messier aspects of people, the un-named experiences which are beyond body and explanation, the real, the unreal, and unearthing the commonalities in less seemly aspects of human nature.

I've written about Gfrorer a few times and I don't want to regurgitate my thoughts, but I will say she is currently one of the most consistently excellent comic makers around. I talked earlier about points of accessibility for readers, and while her 'areas' of sexual, spiritual, supernatural, mythic erotica might seem leave it or take it, they are universal in their scrutinisation of people and their ways.  Visceral is one those words that tends to be bandied about and mis-used a little, but it's perfectly applicable to Gfrorer's work: I'm yet to come across literature that is so basely evocative in garnering response,as images and narratives they grab you in the gut and twist, almost a physical touch. Confrontational is another. I'd argue it's not confrontational in as much as it presents things -usually things considered taboo- unvarnished and plainly. Ideally, such discussion would be the norm, but it isn't, which is why it can appear confrontational, and why we should be thankful Gfrorer does what she does (and so excellently, too).

Where writers tend to focus on a character and their emotional responses, import weighted upon the person, with emphasis often placed upon overcoming and controlling impulse and feeling and not giving in to it (there are negative connotations to letting go and giving in, the preference is to rise above undesirable, instinctive, impulses), in Gfrorer's narratives, characters are vessels for their emotions, seething and bubbling, over-spilling, momentarily or completely. I guess that giving over to darker or baser aspects is also why Gfrorer's work can be termed as horror. There are monsters and supernatural beings in these stories, but there are humans too and they would be unintelligible in difference were they not visualised. We read stories to connect with them, and recognising these aspects, in some form- comfortably or uncomfortably, within yourself gives the experience an added edge. 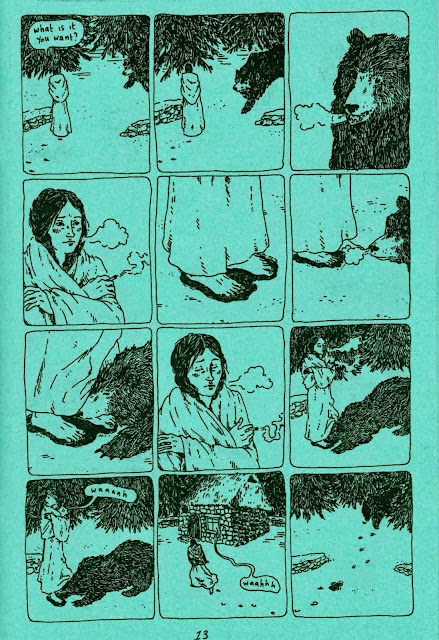 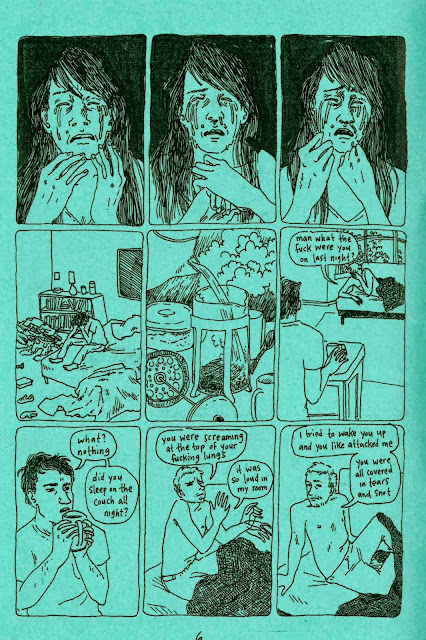 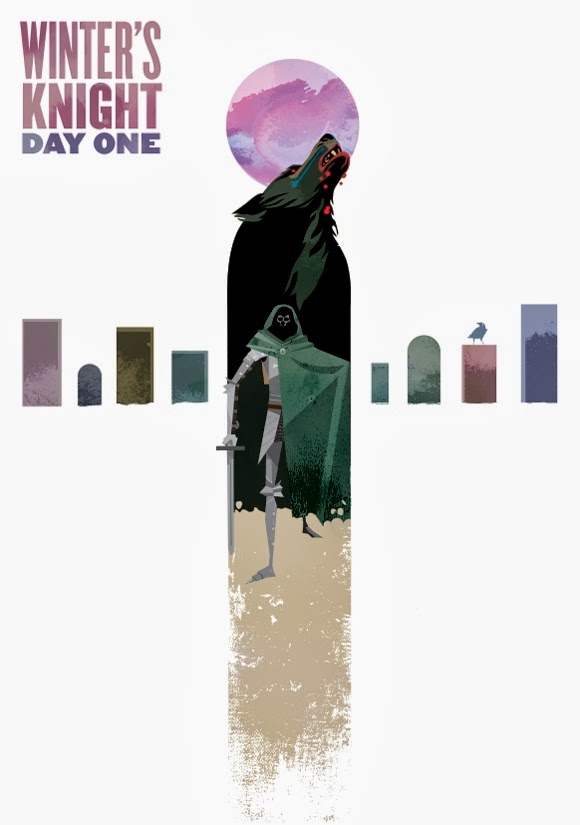 Winter's Knight by Robert Ball, Great Beast: There's something about very stylised, design-focused, wholly digital illustration that's a bit clinical and removed- for a one-off image it's fine it can be  very effective but I don't think it's very conducive to longer narratives, it's less easier to imprint and associate with hard edges and geometric shapes. So I was pretty impressed with Robert Ball's Winter's Knight which managed to retain my interest over the course of a  56 page narrative. It's a silent comic, so the visuals are working that bit harder, and are under that bit more pressure to perform, but they are more than up to the task.The story of a knight battling demonic, possibly hellish, forces isn't always clear, but honestly I don't think it matters- the gist of it transmutes and the open interpretativeness of it sits fine with the concept and style of illustration.

The colours and shapes, the quest, the spiritual and demonic elements, the slightly religious undertones give it a stained glass church feel (this is now officially a thing); it's very reminiscent of Hellboy and Mignola in it's themes and iconography. It's most effective, however, in its spectacular use of colour; the colours do a lot of leg-work, implying psychology, character, time, place, events. They inject warmth and emotion, too; Ball using a spectrum of hues to drive the narrative onwards and the reader making jumps and filling in the gaps themselves.

It's amazing how the brain translates the visuals into words in your head. Nobody, I think, looks at a picture of a cloaked man trudging in the snow and absorbs it solely as an image, there's a running commentary in your head. You see a cloaked man walking in a white space and internally you get something like 'a man has journeyed a long way through cold, snow and mountains. He is tired and exhausted, but determined to carry on because his task is of great importance.' On the page that's a pretty simple 5 panel sequence, but the bend of the man's head, his posture, the colours and landscape, and your recognition of similar texts allows you to embellish your reading of the story, and Ball facilitates that particularly well.


I really enjoyed the more filmic practice of having a few, brief scenes/shots/panels of narrative before cutting to a title sequence. Ball executes it here magnificently: a framed, full double page spread of a vast mountain in long-shot, 2 pages establishing a lone character traversing a harsh climate, hinting at the breadth of his journey and then pulling away to a double page spread of the sun rising atop a hilled graveyard, the stones spelling out the title of the comic, with an inkly black raven punctuating the last grave.  You can almost hear the ominous caw. Ball tightens the image vertically, filling the pages with black so your gaze isn't drawn down or elsewhere but just on that one image; that's how to do cinematic in comics, if you were wondering. This really altered my perception of design focused art, and I look forward to the next installment. 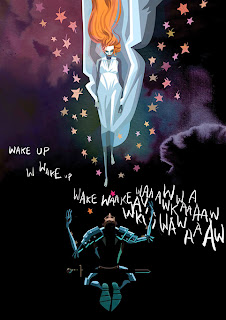 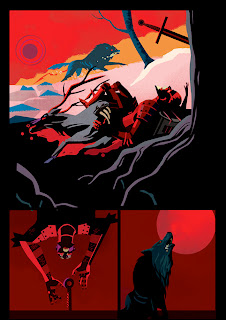