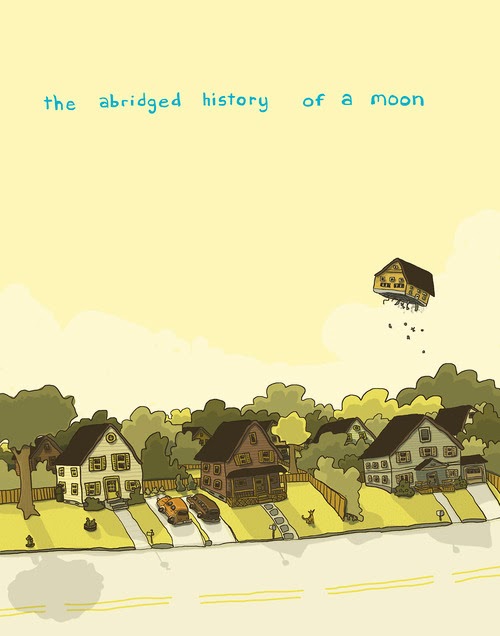 In which Patt Kelley is obsessed with the world ending. You can read his comic, The Abridged History of the Moon, in its entirety over at his blog. It was Kelley's entry for the Comics Workbook Composition competition, and another rumination on how only something as huge as the world ending would finally lead people to recognise the value in themselves and each other (NB: the dude on the floor in the grocery store is the approach I would take). It's a little melancholy, but realistic and strangely affirming. I love the way he's used colours here; this comic marks Kelley's first foray into digital (apart from the initial pencilling, it was all done in Photoshop) and I think it's a great success. 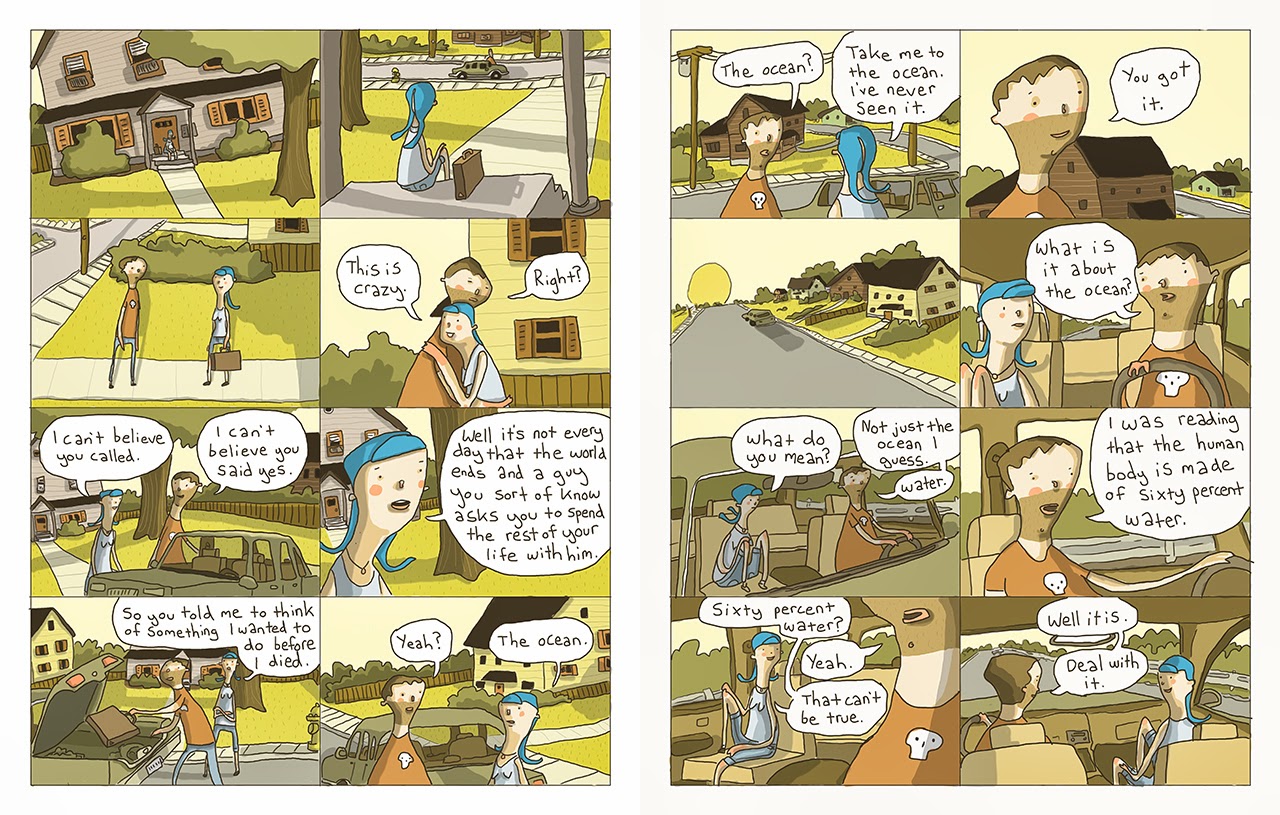 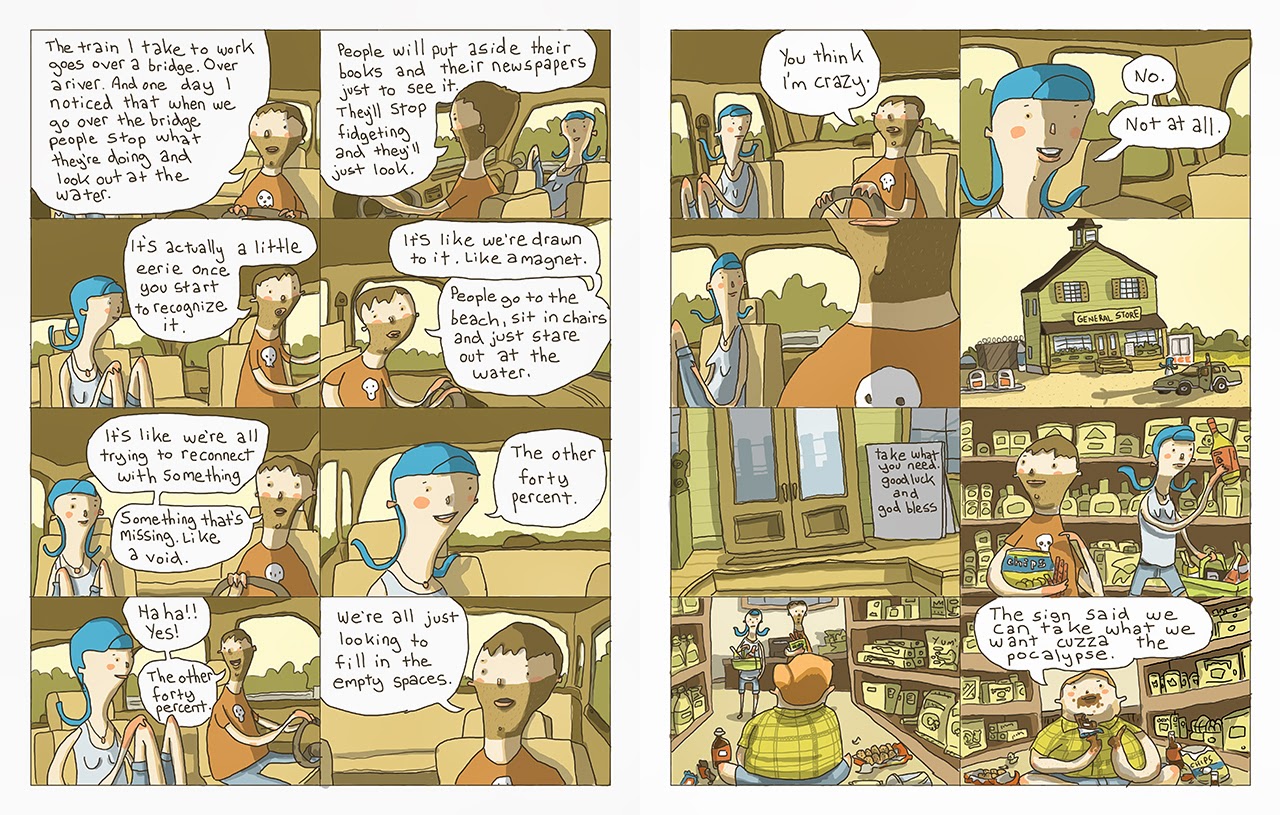 And let's make this Patt Kelley day: here's a review of his excellent book (originally published over at the Forbidden Planet blog), What am I going to do without you? which was released digitally by Top Shelf last year, and given a print release earlier in 2013. The collage model cover of this is still one of my favourites; love that stone-y, plasticine dinosaur lying in the dappled sunlight. 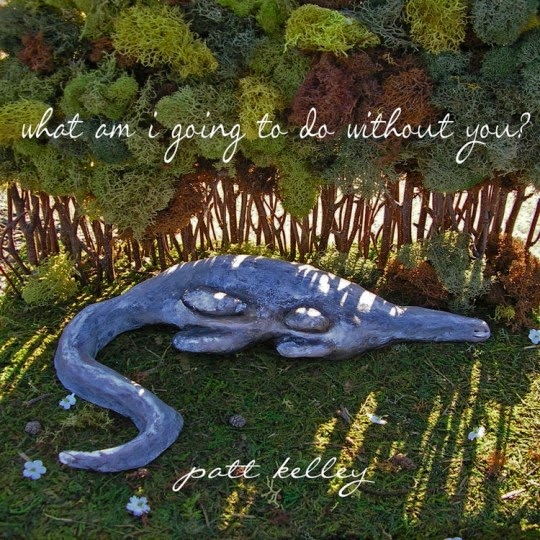 It begins as it ends: with a dinosaur. It’s hard to dislike a book that uses a dinosaur as a metaphor. You can’t call Kelley out on using such an obvious ploy, because well, it’s a dinosaur. It is, as a character in the book helpfully points out, difficult not to be fascinated by the mysterious, gigantic, lumbering animals who roamed the Earth before us. The dinosaur in question, a brontosaurus (or apatosaurus), is discovered in a park by a group of children, lying on its side. It dies soon after. Its death is arbitrary; its existence instead a reminder of something great and wonderful which had been thought lost. The magic the creature represents inspires a new-found belief and wonder, a new sense of possibility: what else is real, makes everything appear a little more special, allowance to believe in the fantastical, dragons, fairies, unicorns-perhaps even in goodness.
What Am I Going To Do Without You (which will hitherto be referred to as WAIGTDWY as it’s a bloody long title) follows three women: a teenage goth girl who sassily fends off taunts from her peers with choice hand gestures and words while her parents worry about her strangeness and possible evil,  a young woman settling in a new city with her dog of indeterminate origin, and an elderly lady accompanying her husband to the hospital for tests, the two joshing and bickering comfortably. All three are faced with challenges and all deal with them in ways that are different, yet always positive and empowering:Jeanie- smart, brave and unbowed by bullies, Katrina, who sees wonder in small things and Flo who is resolute and strong in the face of horrible tragedy.  I don’t think its pushing too much to say there’s a strong feminist reading here. 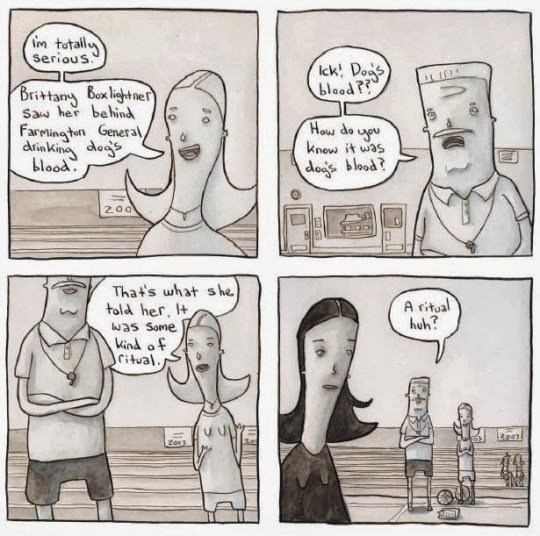 Kelley creates a world that is made beautiful by the surprising and unexpected intervening in the everyday; even an asteroid shower is strangely mesmeric and lovely. It’s a pleasure to read something that manages to be simultaneously reflective, believable and not depressing. His narrative threads are suffused with a rolling tart humour: particularly Flo and Murray’s banter and an incident involving Jeanie, her teacher, and her parents  that begins with rumour and conjecture  and rapidly spirals into accusation and  misunderstanding,  that’s both sad and hilarious in the acuteness of its observation. It is Flo’s journey, however, which is the fulcrum of WAIGTDWY, not only in terms of time, but the emotional spectrum she traverses: anger, disbelief, then dazed acceptance, emptiness, bereft of meaning, and eventually an awkward routine and gradual peace. It is in Flo’s story that Kelley delivers a quiet, true triumph of comics storytelling; firstly with words and then solely with pictures.
The overarching feel and message of the book is a positive one, and there’s one of those idioms/quotes that instantly came to mind after having read WAIGTDW- ‘life is uncertain, eat dessert first.’  As a people, we are quick to shoot down messages of positivity- embarrassed by their show of heart and earnestness. Make the most of the time you have, utilise even the smallest moment, appreciate the people you care about, those you don’t: all these messages which have become so overused that their meaning has faded, watered down and lost, so that they appear bombastic in  cliched triteness.  Kelley, as an artist, and a good one, makes you feel the relevance and importance of that message again. It's good to be reminded. 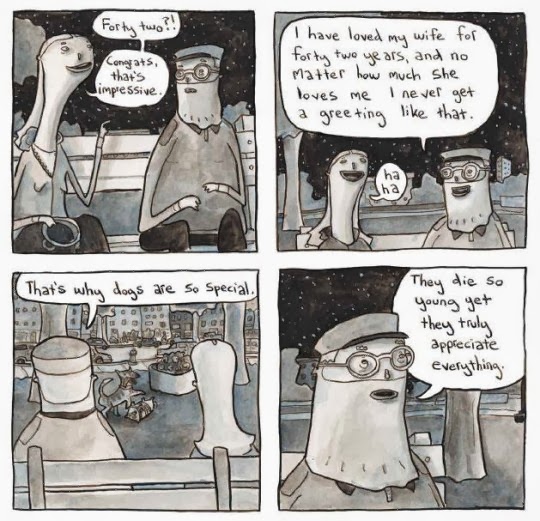 Email ThisBlogThis!Share to TwitterShare to FacebookShare to Pinterest
Labels: comics, comics workbook, digital comics, end of the world, free read, Patt Kelley, people, Photoshop, quick review, review, the abridged history of the moon, what am i going to do without you? feminism, women