New Studio Ghibli documentary: The Kingdom of Madness and Dreams 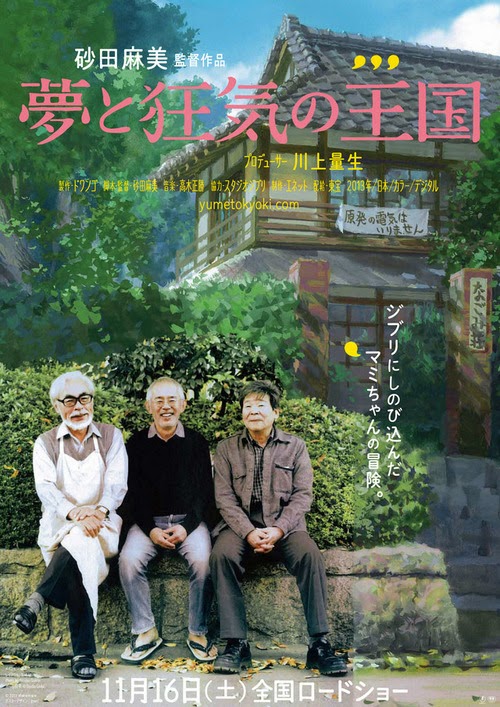 There's a great looking new documentary about the much-acclaimed Japanese film animation company, Studio Ghibli, due for release in Japan next month. Studio Ghibli are probably best known in the West for the Oscar-winning Spirited Away and Howls' Moving Castle, the success of which bought wider attention to the rest of their cinematic oeuvre, such as My Neighbour Totoro, Princess Monoko, Ponyo and Kiki's Delivery Service. To comics and film fans, Ghibli are also known for their visionary and charismatic director, Hayao Miyazaki, who announced his retirement earlier this year. Ghibli's informal conception began when Miyazaki adapted his superb Nauiscca comic into an equally brilliant animated film in 1984, a film that though produced before the founding of the studio, is generally included as part of their works and viewed as an integral factor in it's birth.

Direced by Mami Sunada, the new documentary, titled ‘Yume to Kyōki no Ōkoku’ (The Kingdom of Dreams & Madness), follows various studio figures as they work on the creation and production of new animated movies; Miyazaki, as he works on the film Kaze Tachinu (The Wind Rises), director Isao Takahata as he works on the film Kaguya-hime no Monogatari (The Tale of Princess Kaguya), and executive director and producer, Toshio Suzuki as he works on both projects. The documentary opens in Japanese cinemas on November 16th, and here's hoping a subtitled DVD release follows. There's an 8 minute video preview below that's worth a look, even if your Japanese isn't up to scratch!