Snapshot thoughts: A Taste of Chlorine 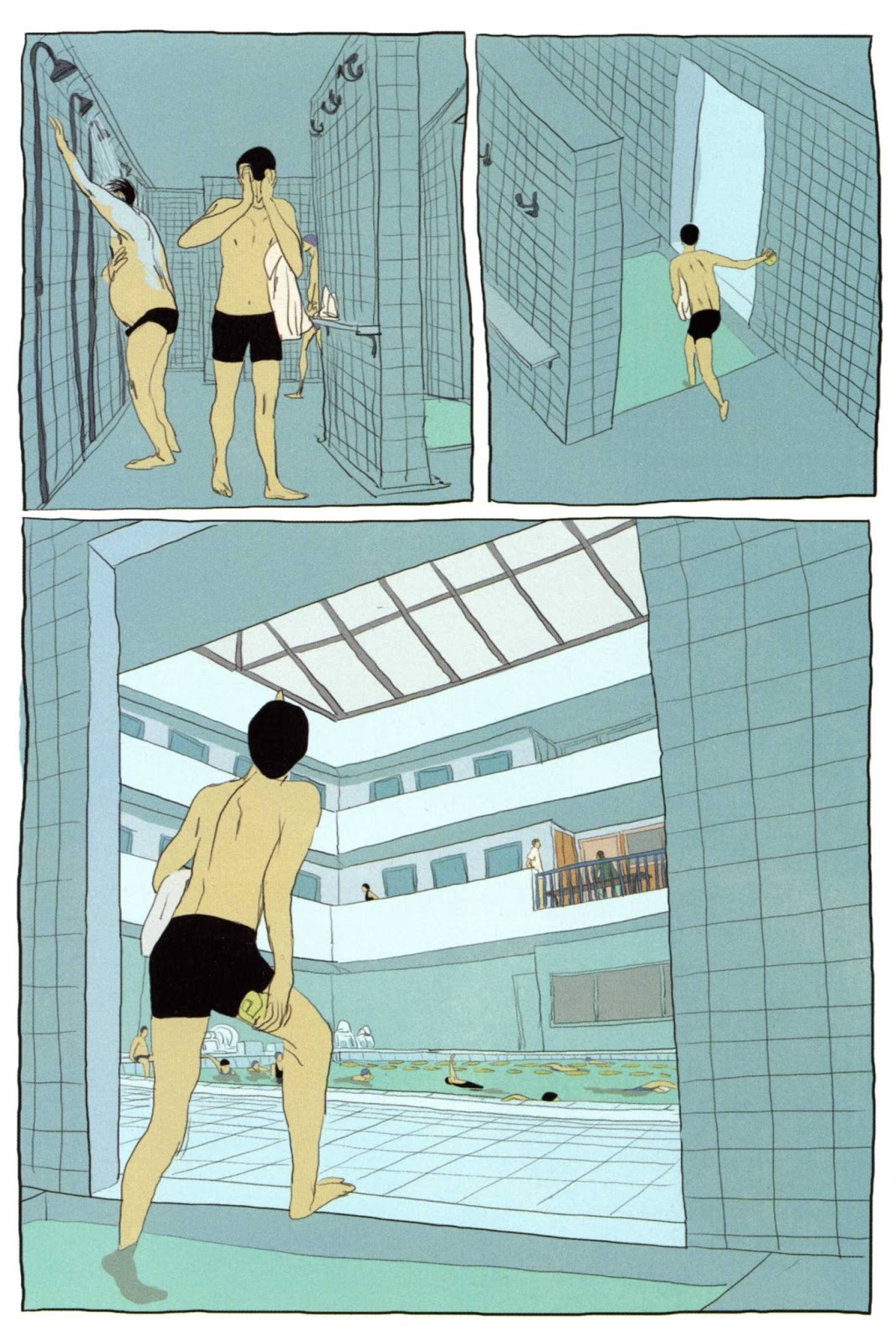 I finally got around to reading Bastien Vives' A Tatse of Chlorine in the feverish period of abject task ignorance that was my Masters dissertation, and was just so enamored with it I thought I'd gather a few thoughts about facets of it which particularly struck me in a looser, tangential style, instead of a traditional review. The basic plot follows a man on a physiotherapy regime making weekly visits to the  communal swimming pool. It lulls you into a hypnotic, almost trance-like reverie, embedded by the routine and repetition -mesmeric, but never boring- Vives places in his story: man arrives at pool, he changes, he peers around the pool and at people, he swims, he showers, he changes,  end scene. Rinse and repeat. Same setting, same colours, same person, over and over. The actual pace of the narrative is languid and contained, but it has an underlying, engrossing intensity, which holds the reader in a firm, unwavering grasp.

That feeling of a mesmeric grip on your interest is largely due to the swimming pool setting; or more specifically, the water. I was reading Patt Kelley's 'Abridged History of the Moon' earlier this week, and one of the characters in that comic makes one of those astutely obvious observations regarding the strange effect water has on people- 'The train I take goes over a bridge. Over a river. And one day I noticed that when we go over the bridge people stop what they're dong and look out at the water. People will put aside their books and newspapers just to see it. They'll stop fidgeting and just look. It's actually a little eerie once you start to recognise it.' Whatever the magic hold of water on the viewer's consciousness (and my guess would be it's some form of innate, unsettling recognition that the Earth is 71% water and yet 95% of the ocean remains undiscovered, which means that roughly 67% of our planet is unknowable.), it seems it extends to artificial bodies of the stuff, even when rendered on the page.

On an aside, there should be more comics set in swimming pools, they're a fantastic location, cognizant not only of the weird  properties of water, but of their status as odd, unnatural spaces of stilted public performance.

Coming back to Vives, he uses the peculiar build of that unblinking feeling to set an internal tone and rhythm for the reader- there's no urgency or even anticipation, but when the 'disturbance' or change in events happens, it's akin to being made to blink. For a while, Chlorine looks like it's going to take a fairly conservative narrative route- guy mending his body through physical therapy, mending his mind through girl, or epiphany bought about by girl, but that notion of discovery and realisation is left more intangible and open, put aside even.

That's one of the interesting things Vives does here, catering to expectations to a point and then veering off at the end, just  pulling away but not in drastic fashion. One of the main ways he achieves this by playing on mental associations- the association of swimming pools as awkward, echoey chambers, the association of colour psyhcology- cold blues, cool greens, the association of movement, of the rhytmic back and forth of arms and legs, the calm lapping of water, the hardness of the tiles, again using these to create something almost to expectation, almost allowing your brain to make these connections, and then side-stepping  and re-directing them, to produce an effect of something just a little off, a little disquieting. It's not hugely jarring , but enough that it never feels smooth. It's reinforced in his choice of colours, the artifice of the almost fluorescent green water and the unyielding blue of the tiles and walls, none of which are the same (meaning they don't quite sit right together), yet not different enough to save from an appearance of clinical uniformity.

What I really loved and was impressed by here, is Vives' use of perspective, the way he angles panels, the choices he makes in showing you something from a certain point of view: a panel of the pool's ceiling as the man does the back-crawl, the scale, dimensions and angles of the pool from under water, a scene of what's going on pool-side as the man peers over the edge of the water, an aerial view as he looks down from the stairs. He blends an omniscient eye with the man's own view-points- the bigger picture/the smaller picture, closing in/fanning out. You'll note even in the pages illustrated here, he's given his panel borders a mirroring wavy line, and that extends to their interior content- his lines aren't ruled or rigidly precise and straight, so that when you're first glancing at all these angles, they don't seem quite right (again, that minor off-ness), but on closer inspection, the perspective is spot on, it's just not drawn to measured, geometrical perfection. And corners; he does corners so well, just take a look at the page below.

Two things, as a non-drawer, which I imagine are notoriously hard to draw: people and water. Making drawing people in water quite a task. It's difficult to draw bodies of water, to capture the way it moves, and reacts, its appearance, so multi-faceted, but somehow Vives manages it, and beautifully- probably because he doesn't go for that exacting, precision approach. There are so many wonderful touches: the underwater scenes, the way in which he colours flesh underwater differently, how he transmutes impressions of slower and heavier, his figure drawing, particularly shoulders and backs, hunched, sloping and straight, bodies on which emotions bounce off to be read, in which you can see the concentration, unease, effort, in posture and strokes. There's so much to appreciate: from the body language and positioning, stretching, the way people get in and out of the pool, the shadows of bodies semi- under water, the manner in which submerged limbs are drawn, half in, half out, the green of the pool water, the light blue of the water in the shower.

I could go on about it for a while; it's a great, great book and one in which I saw more as I read further. I love it when you eventually get your hands on a book you've been meaning to read for a while and it's everything and more than you expected it to be. This is the first of Bastien Vives work to be translated into English, and if you've perhaps been thinking about picking this up prior to Jonathan Cape releasing his Polina next year, you really, really should. 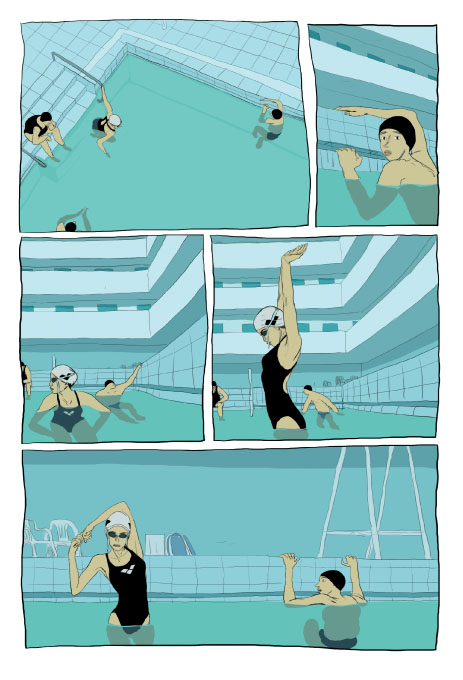