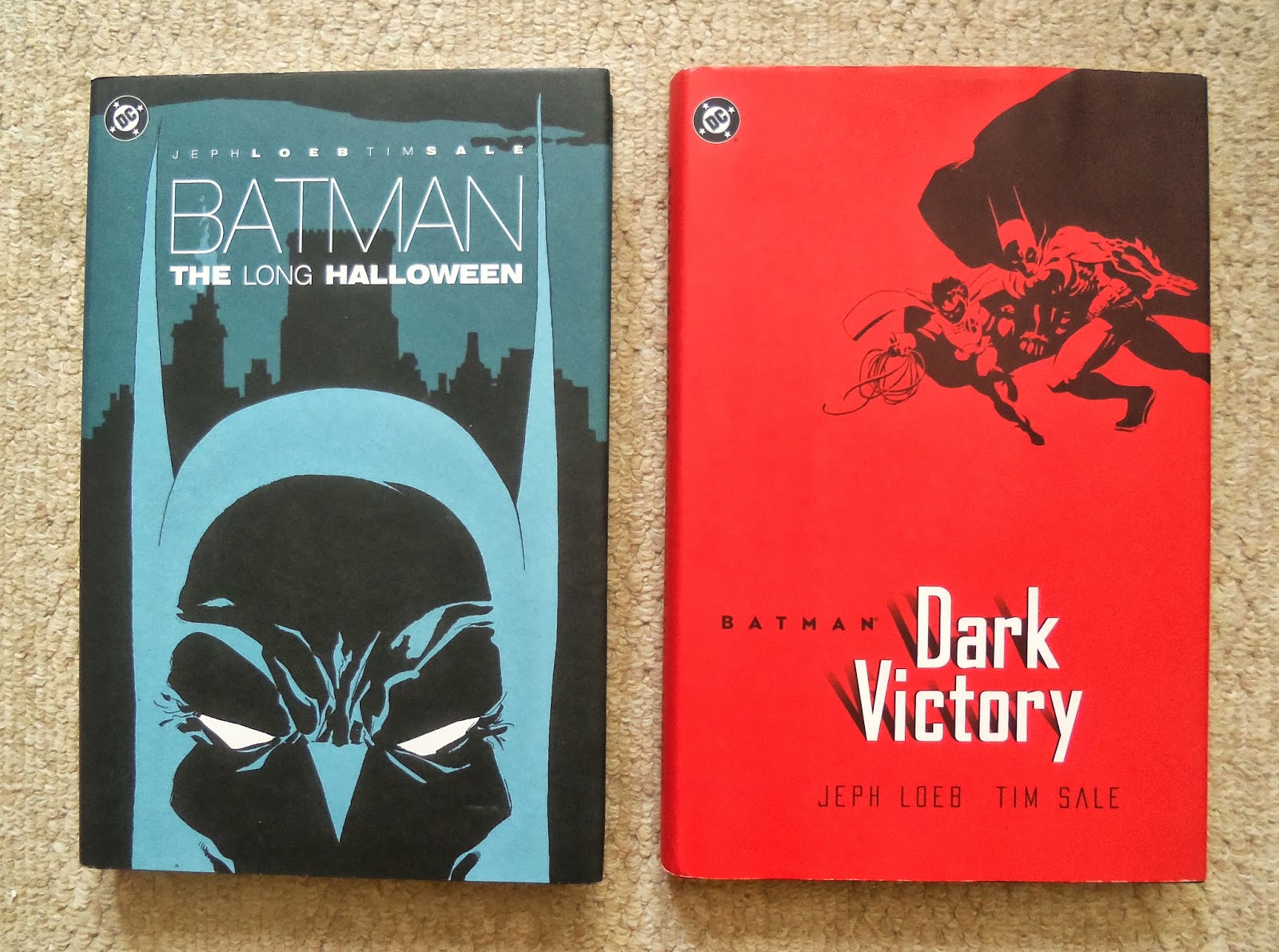 One of the aspects I like about being a Batman fan is that there's so much Batman stories out there waiting to be read. I'm sure there are people who would argue that not having read all the Batman stories ever makes me a shitty fan, and to those people I say EAT CAKE. Cake makes everything better. Coming back to the point I wasn't making, Bat books are where my 'collecting' tendencies towards comics kick in; having the stories I love in a nice hardback format is important to me. With that in mind I was looking to perhaps invest in the absolute editions of The Long Halloween and Dark Victory, but having been recently burned on the purchase of DC's collected, deluxe version of its Solo series with its abysmally tight, glued binding eating up page gutters and stogged resistance to opening up fully or laying flat (stop sniggering at the back), I wanted to investigate a bit further before committing to anything.

My friend Zahid -who seems to have every absolute edition ever put out- offered to lend me his so I could see them firsthand and judge the quality of the books. But before we arranged anything, I thought I would look to see if either book had been released in hardback or deluxe editions, thinking those would probably be cheaper and still long-wearing.  From what I can gather, absolute editions aside, both titles were only ever released in hardback versions at the time of initial release: Dark Victory in 2001 (original serialised run was in 1999-2000) and The Long Halloween in 1998 (original serialised run was in 1996-1997). The former is very rare and difficult to find- there's no listings on Amazon UK or US, while the latter has used copies available from £35 upwards.

Zahid, busting out his use-them-only-once-in-a-year-or-die-a-horrible-death diamond powers, alerted me to an Ebay seller offering a whole collection of gorgeous Batman books- rare material and signed, out of print stuff (I don't want to think what could possibly have led to this to turn of events), including the first edition hardbacks of both Dark Victory and The Long Halloween, which I managed to snag for the princely sum of £33 in total. And let me tell you something, they are bloody gorgeous. Here's how they look without their dust jackets: 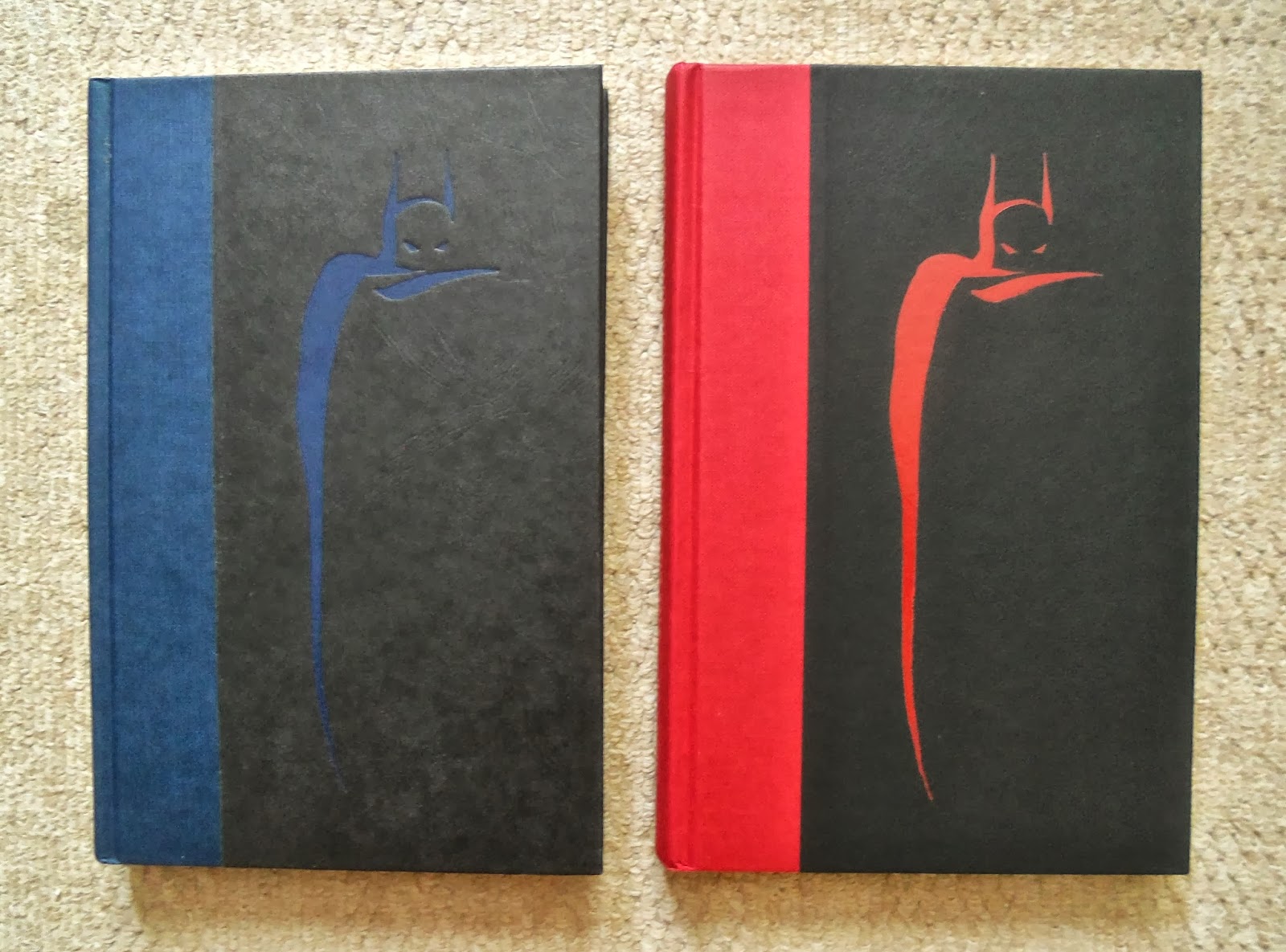 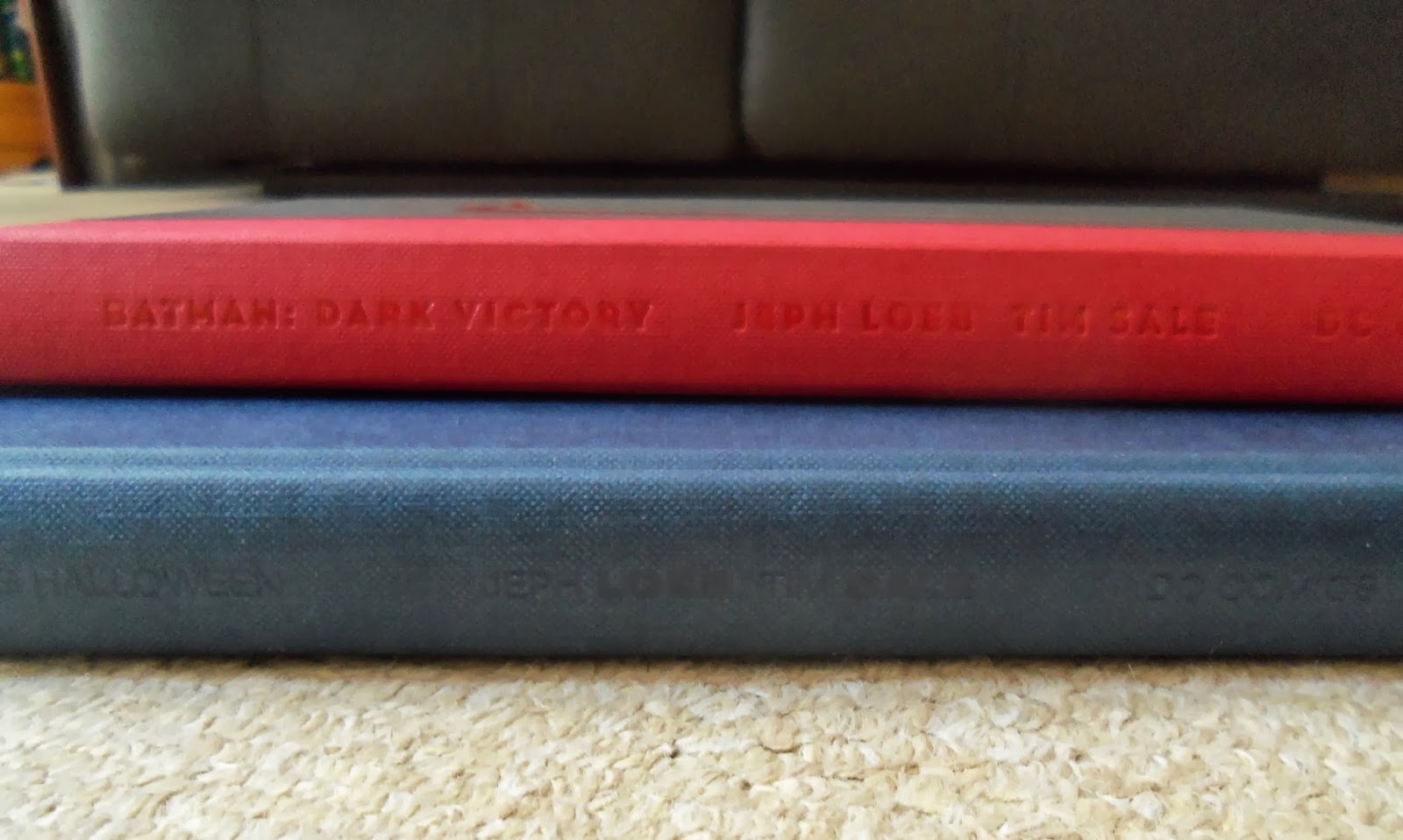 Along with the stencil of Batman on the covers, each book has the title and author's names embossed on the spine. I'm not sure what you'd call the red or blue strip, I want to say cloth-bound, except it's definitely not cloth- the one on Halloween is smooth, whilst the Dark Victory one has a grainier texture. It's interesting seeing how the 3 year gap which separates the production of either book presents itself in the printing quality and values. Both have thick, stiff cardboard dust jackets which are matte on the outside and glossy on the inners- Halloween's feels heavier and more substantial, and as you can see in the pictures, the flimsier Dark Victory has already creased a little.  The pages of the comic itself are different, too: Halloween is printed on matte pages and Dark Victory on a glossier paper which really makes the colours pop. It's a choice that whether intentional or not, suits each story.

As I was flicking through these while photographing them badly, I noticed how the colour palette in Dark Victory is much more vibrant and varied (reflective perhaps of the change, hope and, um, colour that Robin's introduction provides), than that used in The Long Halloween which is grimmer, more muted affair, all greys, blues, purples, browns, nothing really striking or rich. It's weird how you don't often notice or appreciate these things upon a first reading, but then the last time I read these books when I was a teenager and knew a whole lot less about comics. Also, as a reader, I'm generally eager to get at the story, focusing on words and appreciating visual  language and aesthetics secondarily. 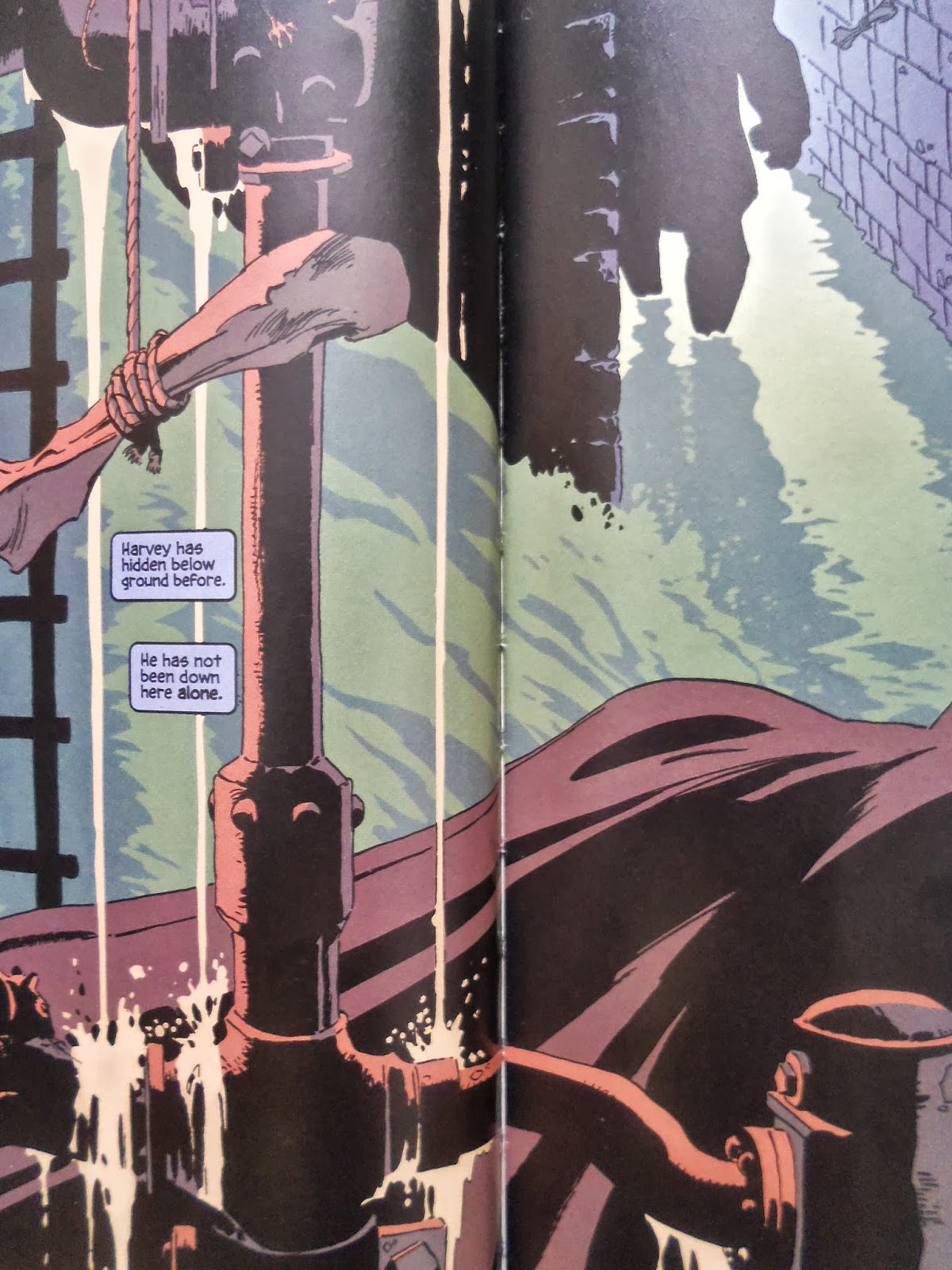 That's a close-up of the sewn binding -you can see the thread when you get towards the middle pages- I watched a couple of video reviews of the absolute editions and they appear sewn too, which is good. Whilst there are glue bindings, and then there are glue bindings, sewn binding is, for most people, the preferable option simply because it's much sturdier, more durable, it lasts longer, and has more give when opening a book to capacity, allowing the pages to flatten out properly from the middle and sit flat so you can view the whole spread properly. With a sewn book, the pages are folded together into distinct gatherings and then put together, which for heavier, longer books with many pages is ideal. Long, thick books which are glued, or glued poorly, tend to buckle and fall apart from the strain. 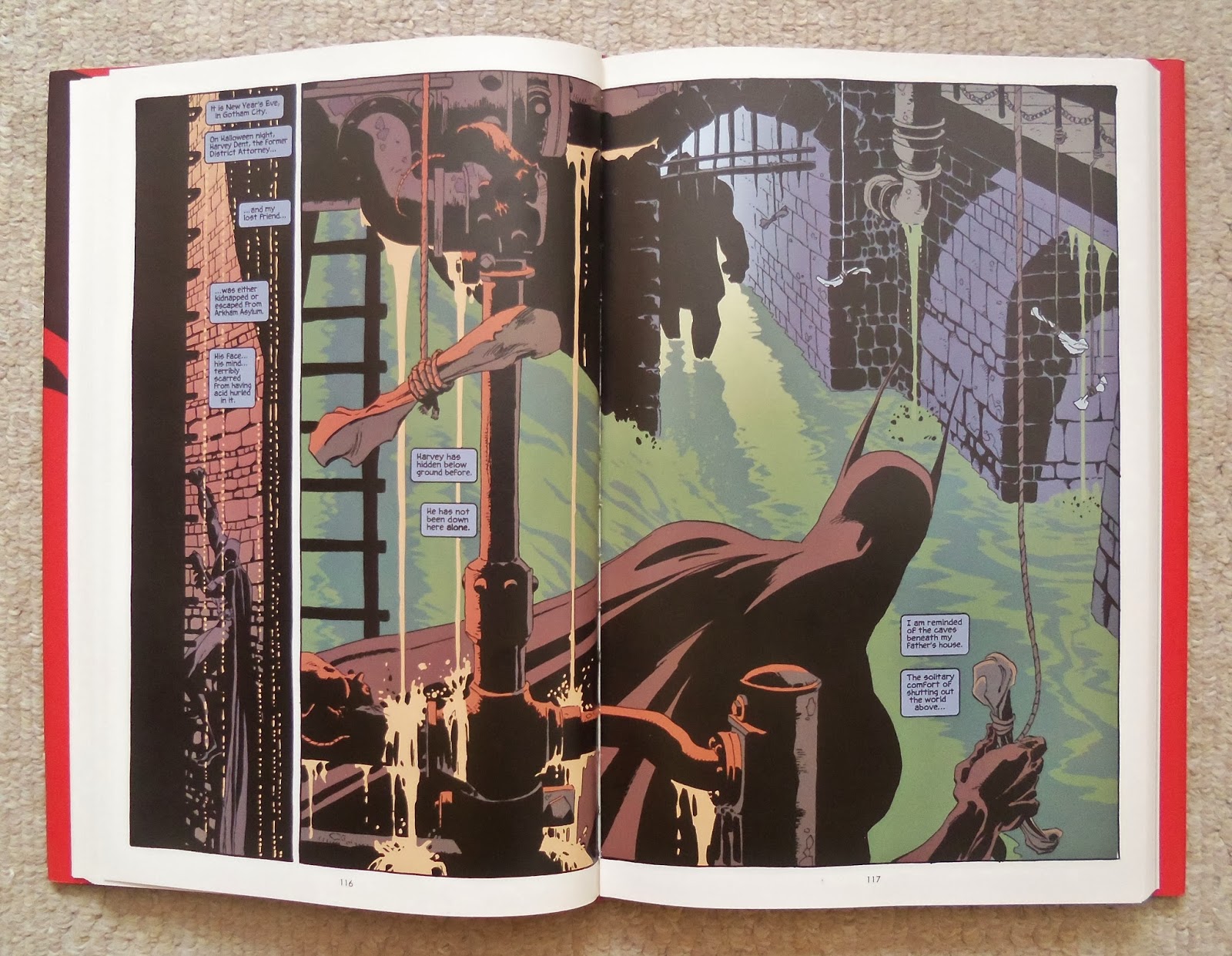 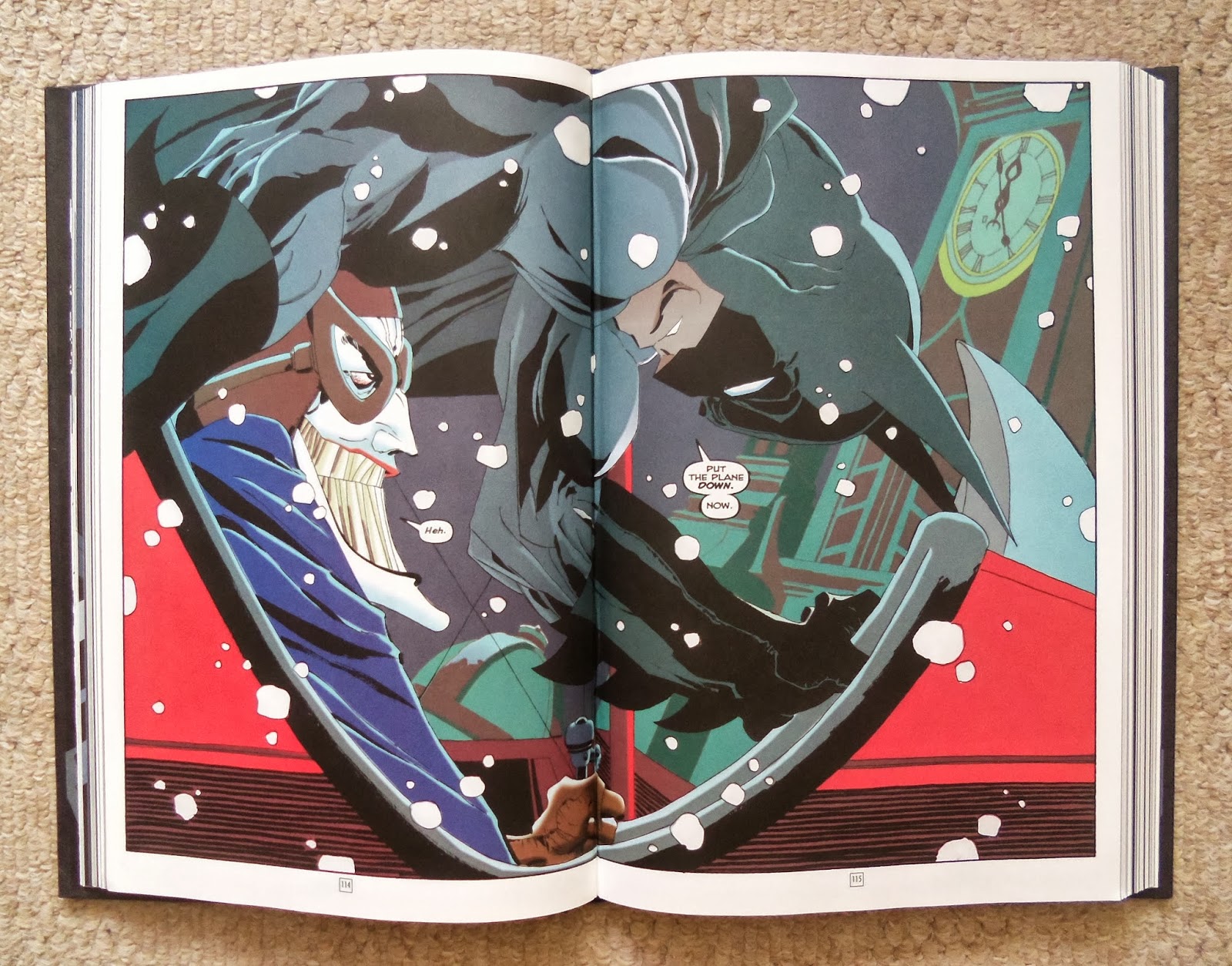 The double page splash spreads in these books are a thing of beauty- Sale's art is incomparable anyway, but  these are honestly something else- look at the one above of the Batman curled over the Joker, or Catwoman stretching over the length of the dining table to lash out at Poison Ivy, below. I'm an English literature grad, a words person, and though I've never ignored art as such, I'm now starting to think about it more and look at it in terms of function rather than style; how it contributes to story, what it's signifying, why panels are designed in certain ways, why particular colours are used, how scenes are composed, the positioning of characters and elements etc.

For example, in the page on the right page below with the Batman and Joker tussling, the panels are all slanted diagonally upwards, following the movement of first, the angle of the plane, then the trajectory of the batarang, and finally, the direction Batman and Joker are swinging in. The panels shift from 3 straight horizontal boxes on the left, where the fight is traditional fisticuffs, to aerially aligned ones as the falling, flying, and swinging takes place. There's a whole host of visual story-telling going on that I'm only just beginning to become aware of.

On a final note/aside, the pages with the Joker here represent the most vibrant hues in all of Long Halloween; acting as a perfect, intrusive siren of his personality, and all the more effective due to their absence elsewhere. I love the way the snow's drawn here, huge, fat white balls of the stuff, it's just damned pretty. It's the best snow since Seth Fisher's comely frozen water clusters in Batman: Snow. This was just supposed to be a short, gloaty kind of crow about acquiring these lovely hardbacks on the cheap, but it turned long and rambly, as ever. Hopefully, I'll get some time to sit down and write properly about the visuals and techniques in both books soon, but in the meantime: BATMAN. 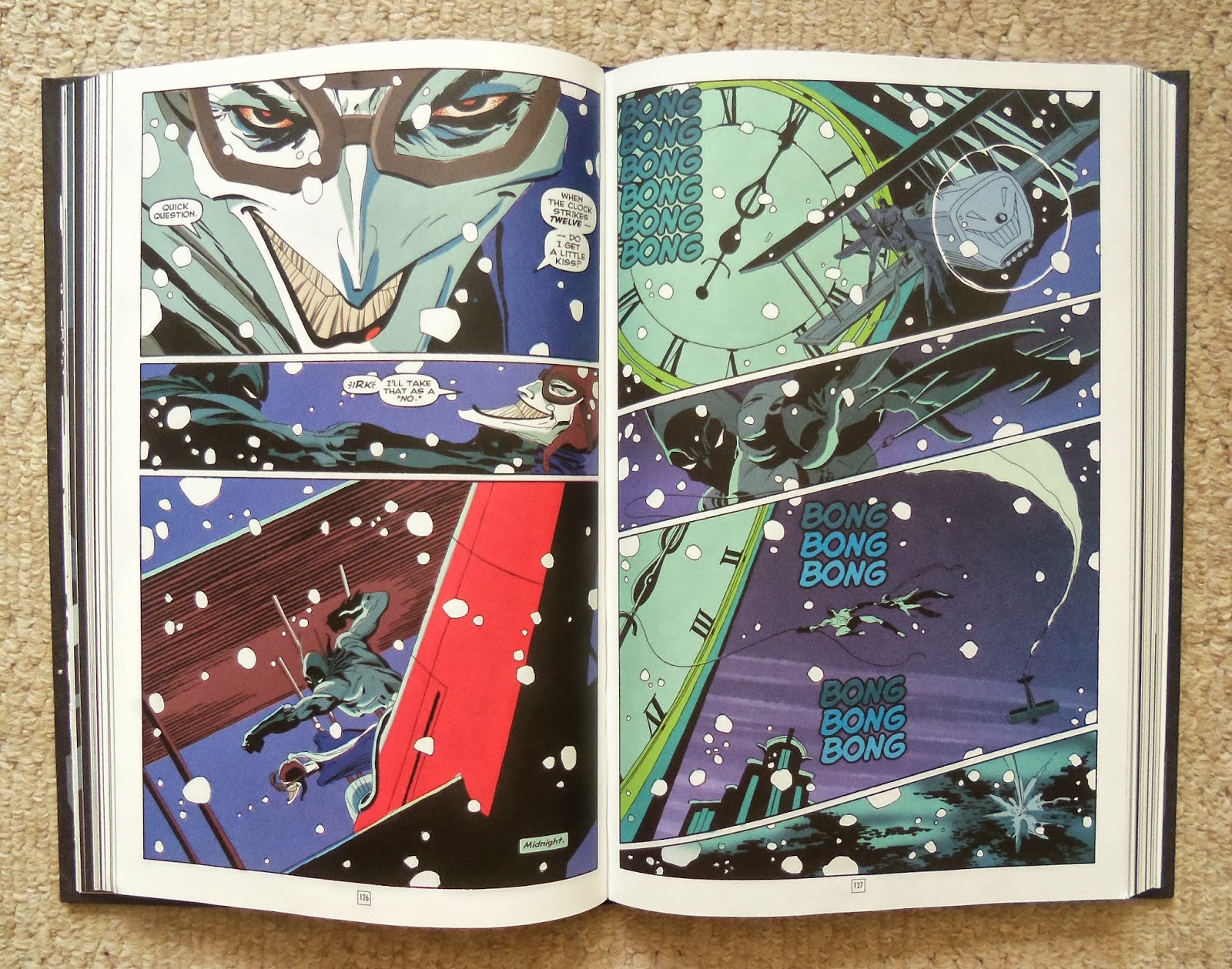 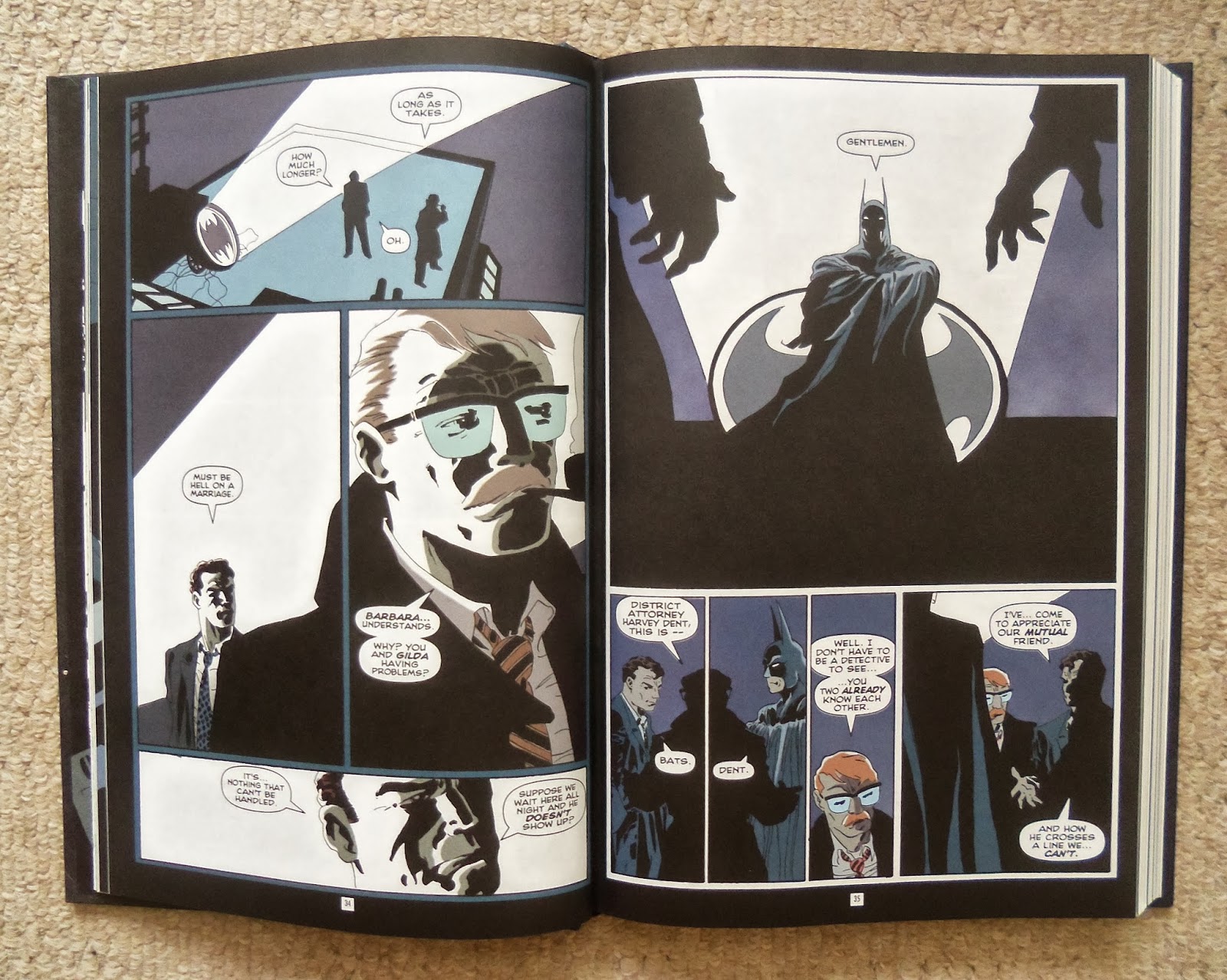 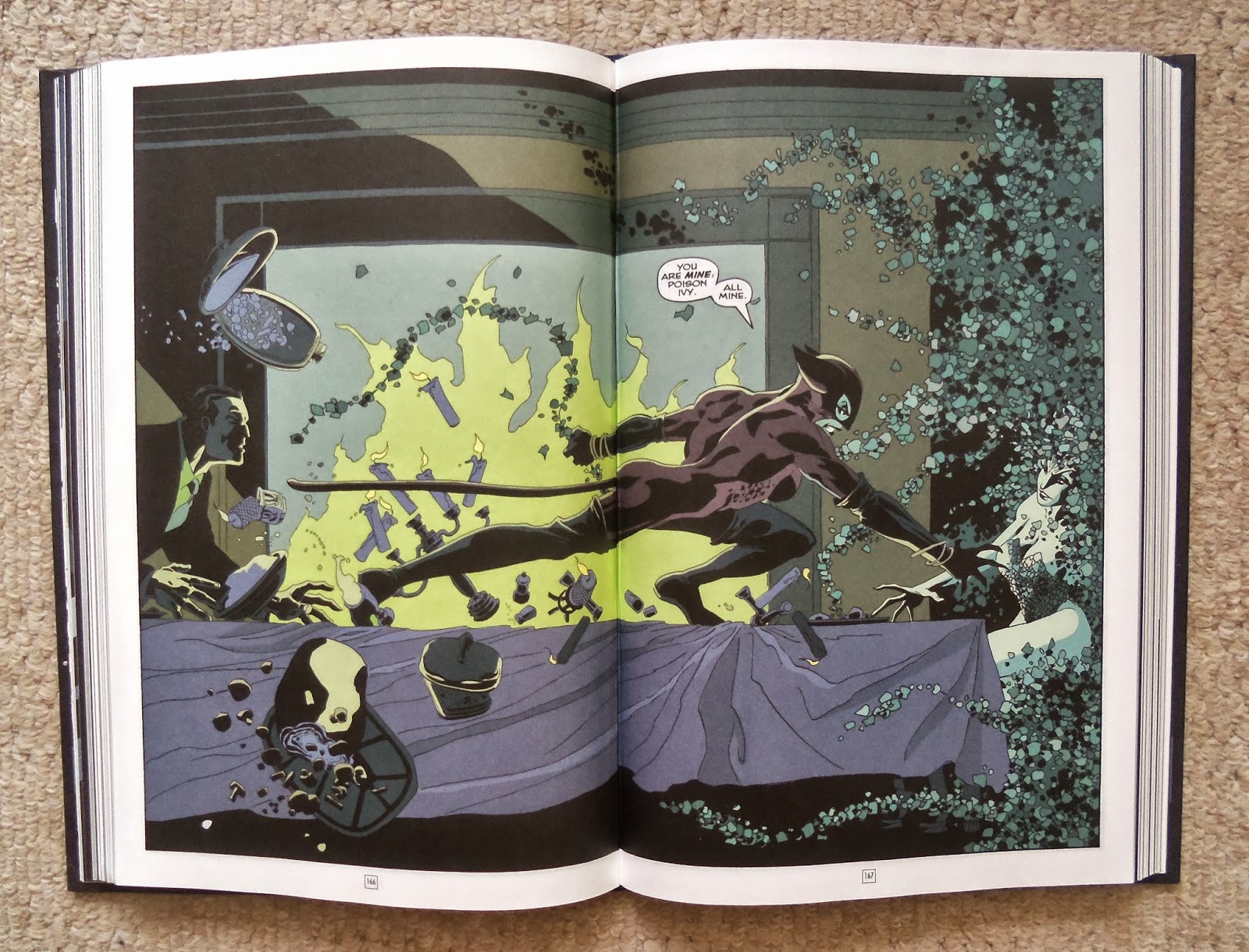 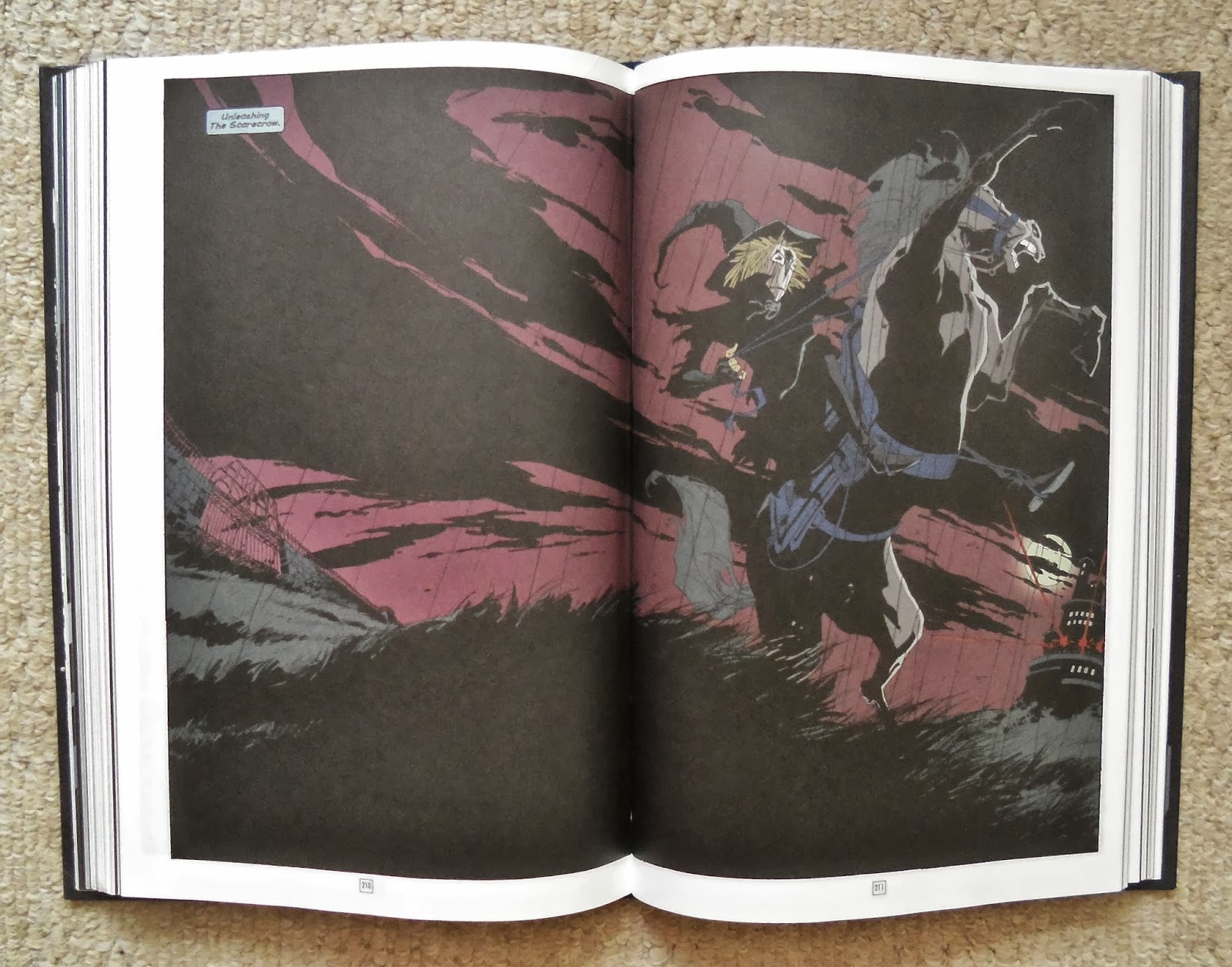