Last week, I came across Jamie Coe's work (thanks to a tweet from Paul Harrison-Davies- thanks, Paul!). Coe, a recent first class graphic design graduate from Central Saint Martins, blew me away with his work and is a hugely promising talent. Which is not to say he isn't pretty damn good already- he is- but when you think of his age and the fact that he can only really improve from here, that's exciting and daunting stuff. There's two things that particularly struck me about his comics: his art style, which carries a clear Crumb-y influence: an emphasised thickness, an ugliness almost, which Coe has refined and made cleaner and clearer, so that while it still has body and meat, it's attractive too, a style which I think offers something a little new and different to UK comics.

The second thing is the range of subjects he covers: perusing his website you'll find Inflation Nation, a short story concerning the rise of university tuition fees in the UK, Bite Da Dust, a comic based around the opera ‘Don Giovanni,' which follows Giovanni in the queue to hell, where he attempts to jump into the neighboring queue to heaven, Patience, a tale in which a western businessman on a trip to Sydney finds himself instead in a remote town in India. He also does a nice line in political editorial cartoons.

My favourite (and the one I've included images from below) is his House of Freaks comic, centering around twin brothers in a circus, one of whom is human in appearance and the other beast-like. The London-based Coe say he aims to 'create a sense of atmosphere and narrative in my illustrations, often distorting reality to emphasize aspects of reality,' and I think of House of Freaks illustrates that tendency nicely. It's beautifully drawn and just amazingly coloured, particularly Coe's use of blues and greens and the manner in which he creates lighting and flashes. Those characters are nicely interesting as well, I'd love to see them in a longer form work, but I'm looking forward to anything Coe produces really.

UPDATE: Colin Bell tells me Coe is currently working on his graphic novel, 'Art-Schooled' for Nobrow Press, so we'll get to see a published book from him sooner rather than later. (Thanks, Colin!) 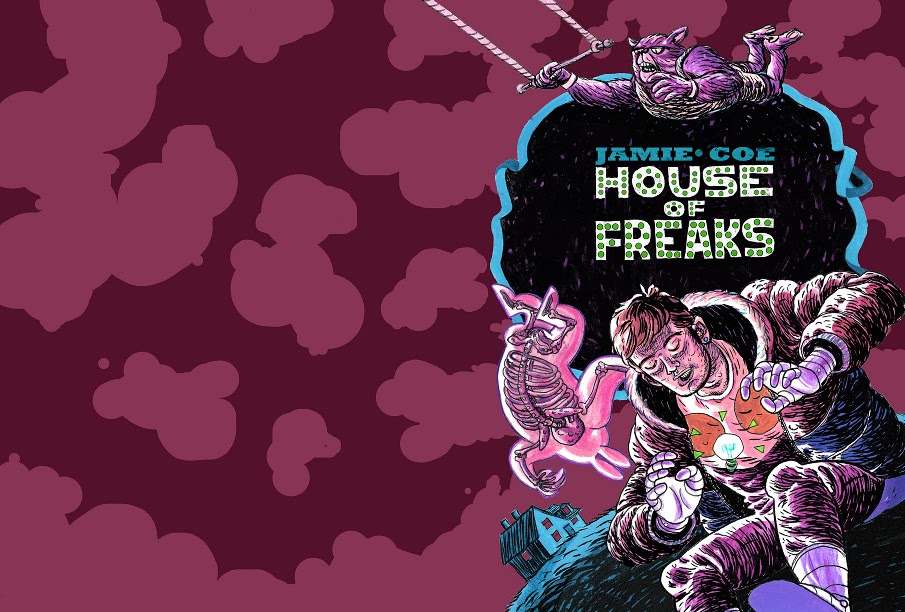 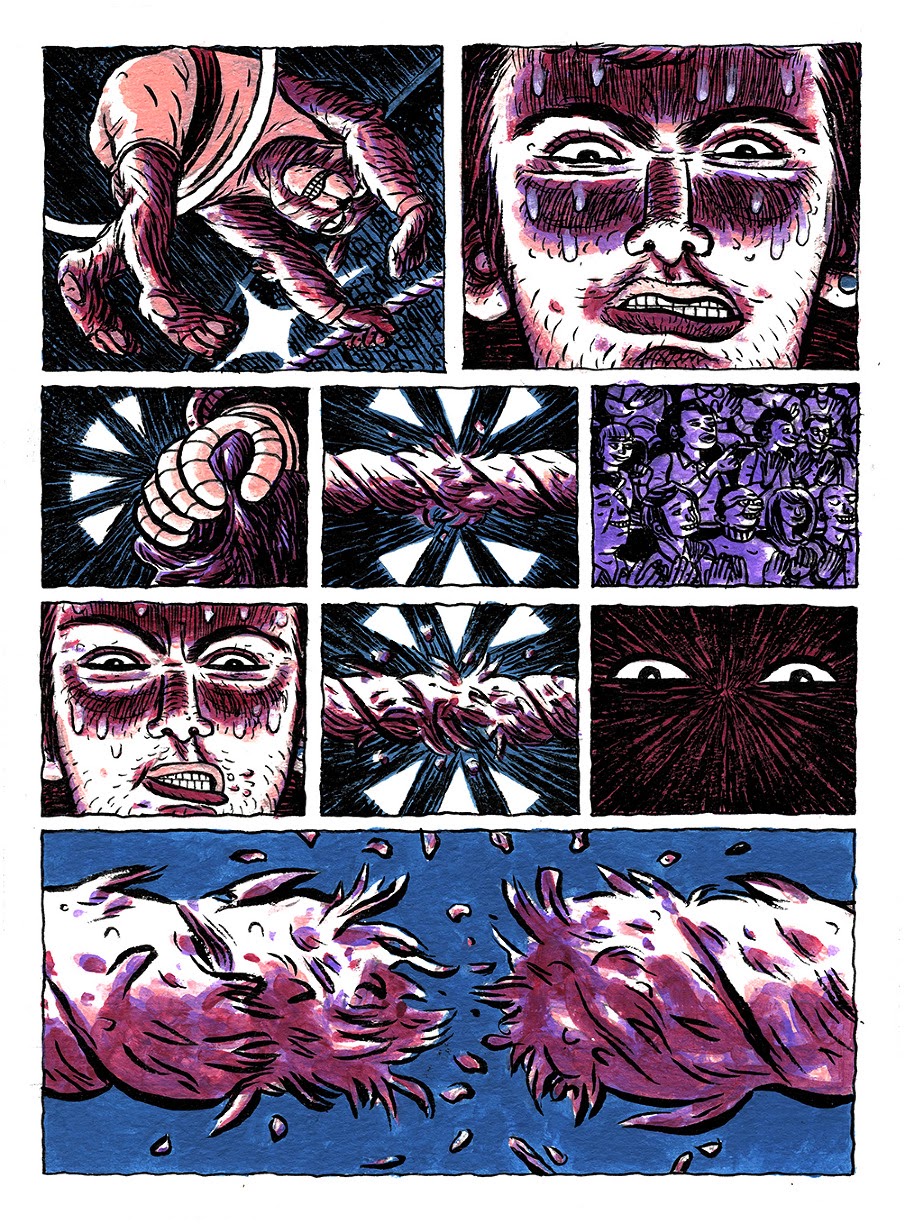 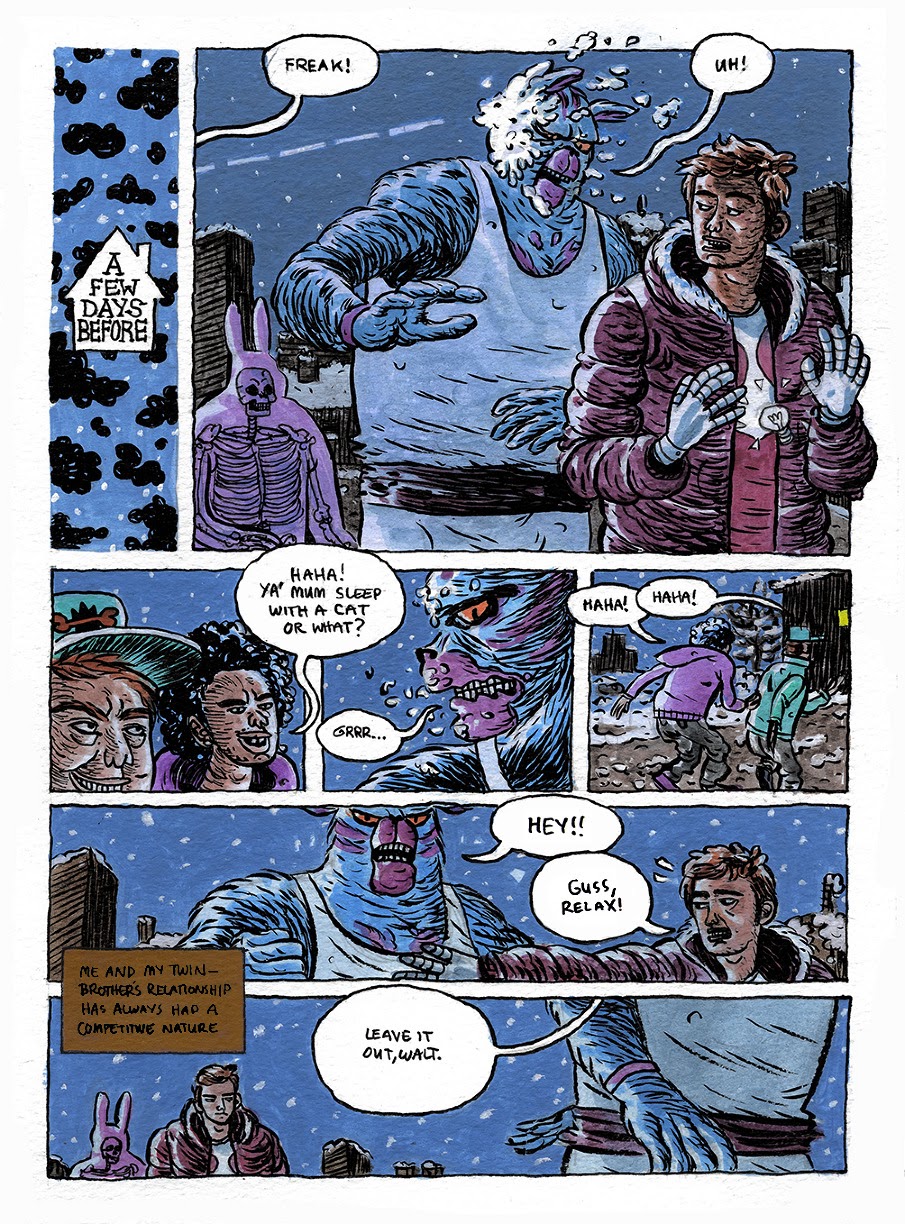 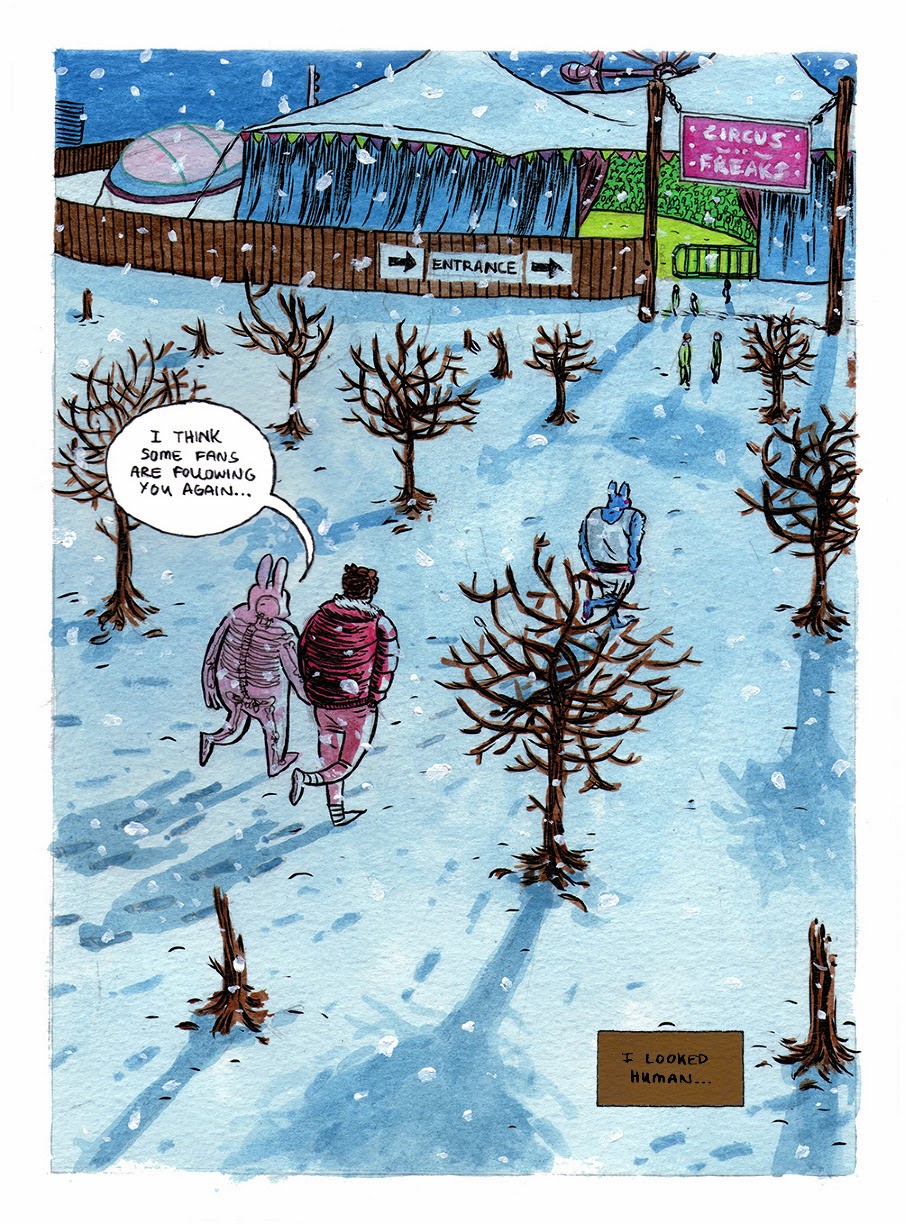 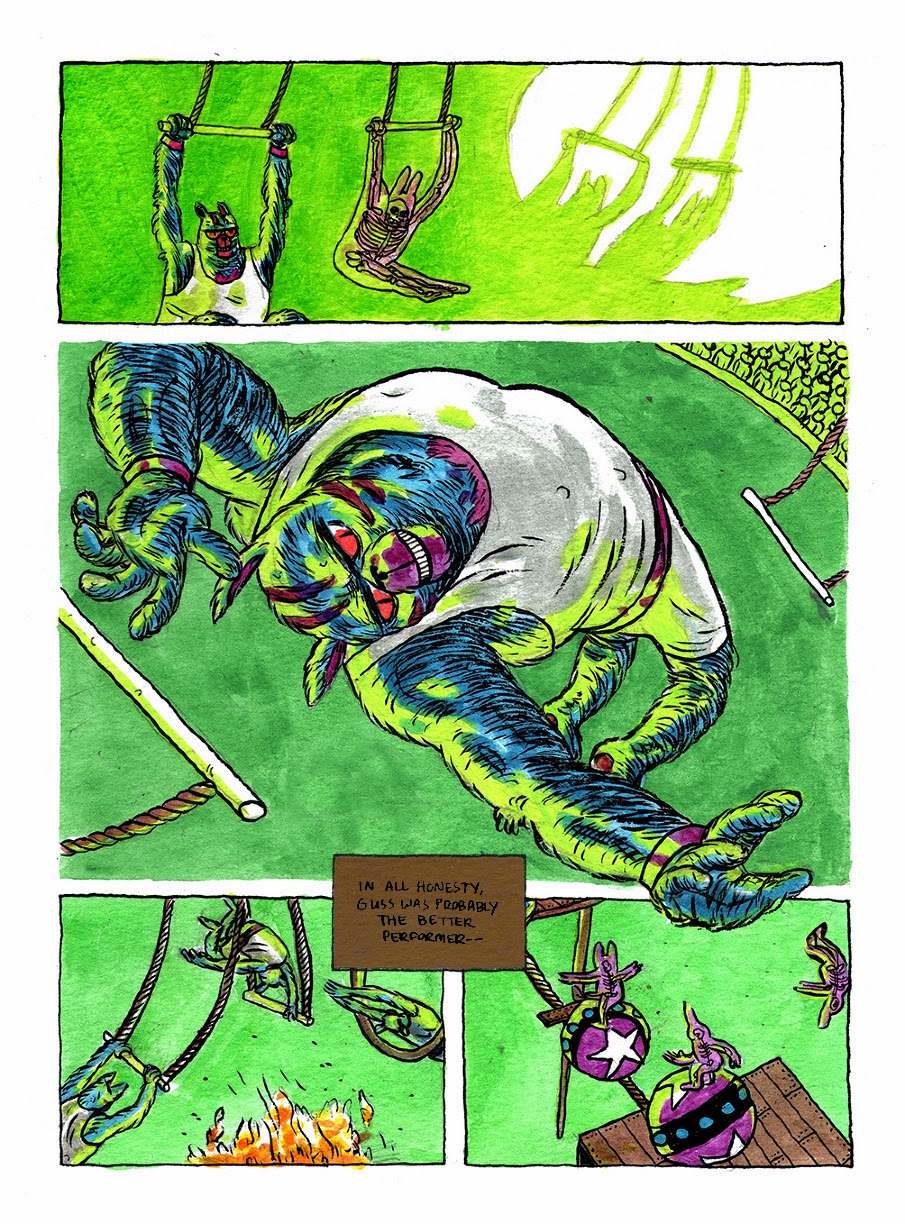 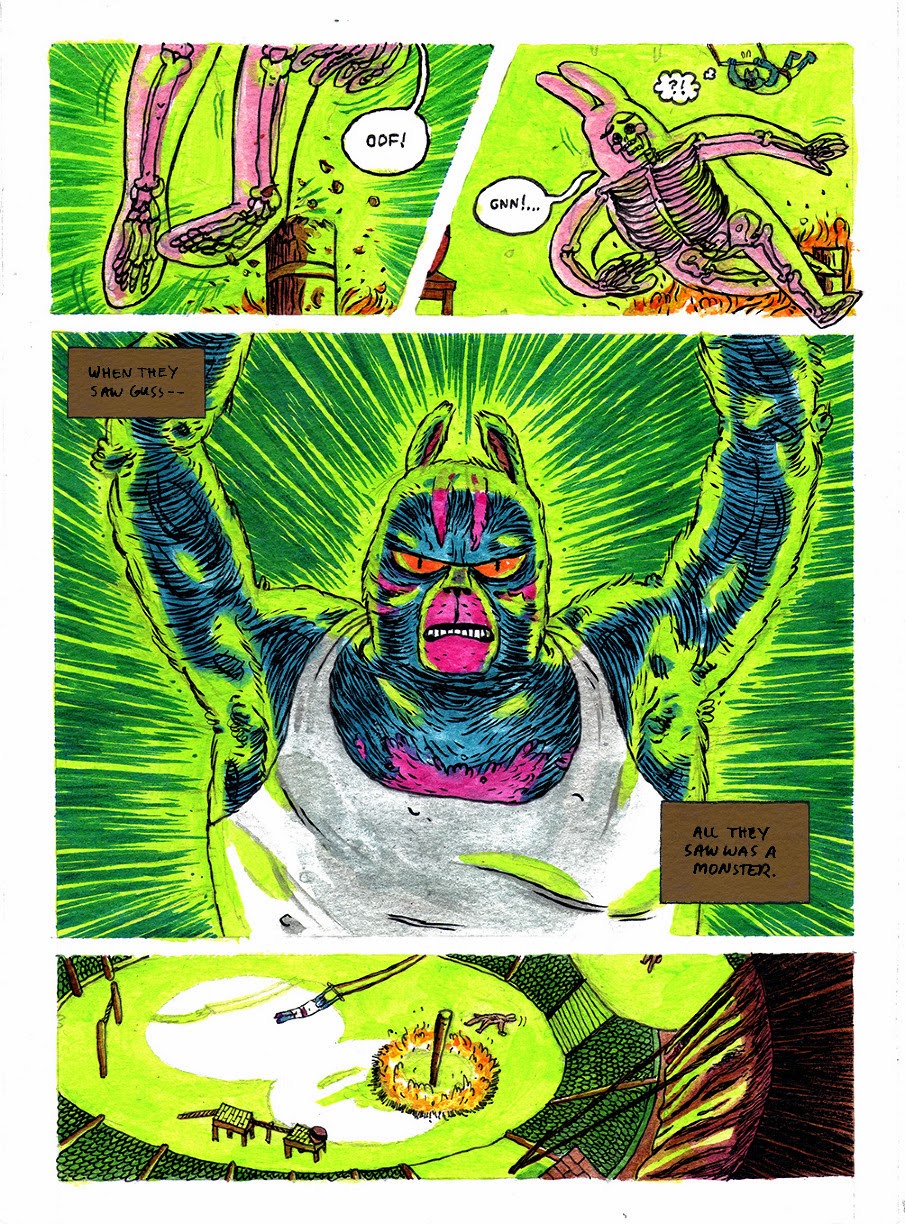