I saw a few of Singaporean comics artist Koh Hong Teng's amazing art going around on Tumblr and thought I'd assemble a few things together here. Below you have black and white and colour spreads of various rather good Teng illustration pieces, followed by a commentary written by Oh Yong Hwee, Teng's co-author on  Ten Sticks and One Rice, their excellent comic published by Epigram Books earlier this year which explains the motivations, ideas and process of the story, culture and history, followed up by a brief review of said book. Teng is also the artist for Gone Case, written by Dave Chua.

I especially love the middle two pieces of the chef's kitchen and cooks, and the two men at the car scarp yard; looking at those, and the one immediately below of the snack/sweet stall brings to mind a Geof Darrow sensibility, in the detailed intricacies and lines, although Teng's work is cleaner, less wrinkly! It's lovely art, anyhow. (Fun thing to do: see if you can spot the cute nod to Sonny Liew's Malinky Robot). 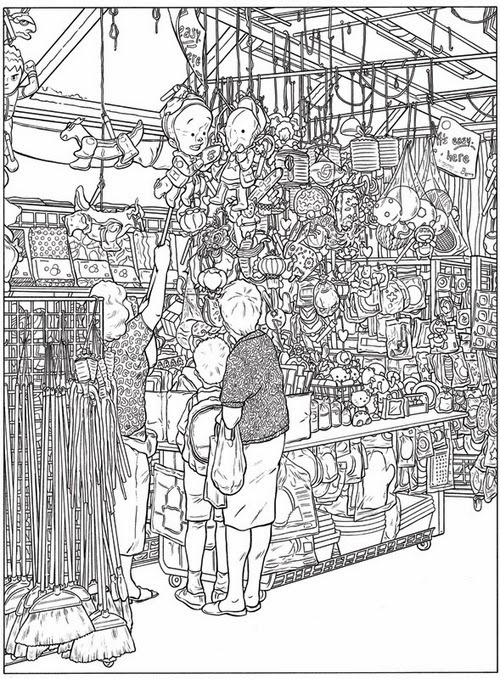 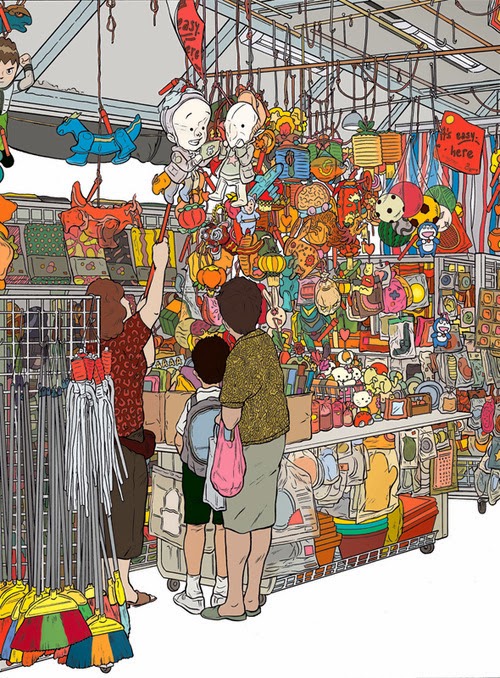 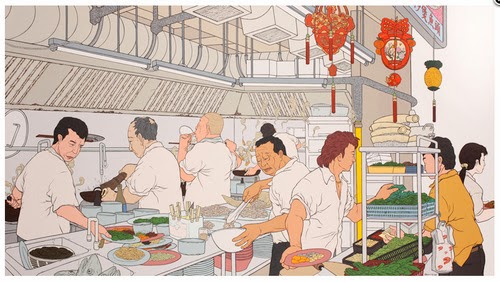 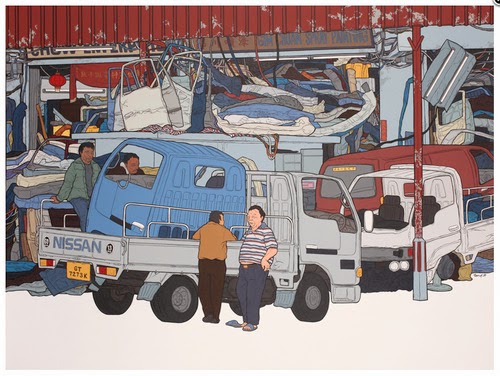 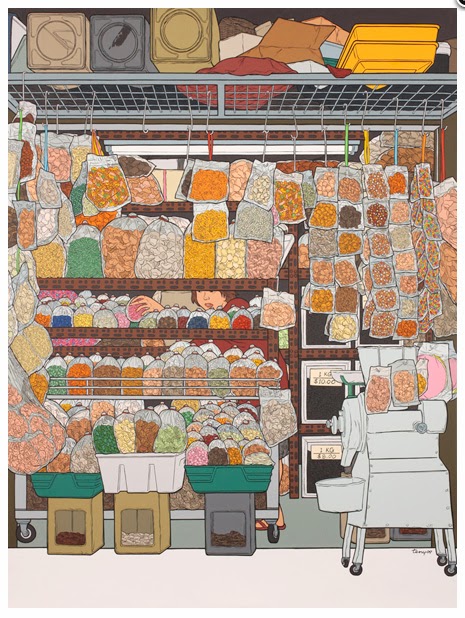 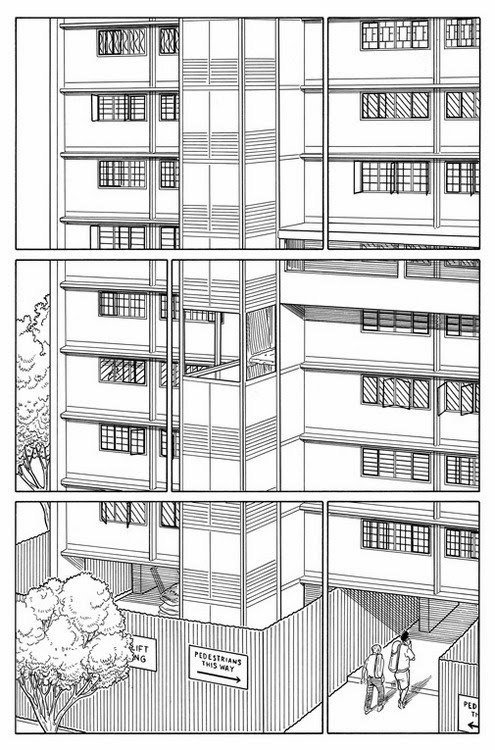 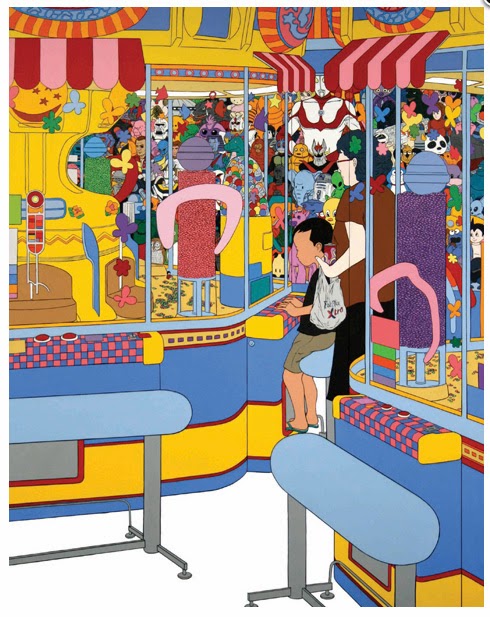 We started talking about doing a story on Singapore’s hawkers 6 years ago, as we felt that there are many touching stories about their lives. Both of our parents were hawkers, and we helped out at their stalls since we were kids. This may sound like child labour, but it was common back in the 70s and 80s. These experiences also gave us some unique life perspectives. In the 1960s, the government cleaned up street hawking and moved them to food stalls in hawker centers for hygiene reasons. Designed like a low end food court, the hawker center and it’s cousin the coffee shop, gave Singaporeans an affordable, tasty and convenient avenue for meals. It was  why many Singaporeans eat out on a daily basis rather than cook.

In my opinion, hawkers, together with HDB1 and NS2, forms part of the Singaporean identity – a typical male Singaporean lives in an HDB flat, served NS and eats daily in hawker centers and coffeeshops. But I think Singaporeans, especially of my generation, are particularly bonded by hawkers not only  because we love the food. Many Singaporeans actually grew up with the “hawker industry”. Ask a Singaporean of 35-45 years old, and don’t be surprised to hear that his or her family was a hawker. They would have helped in a hawker stall after school, at their parent’s stall, or at an uncle’s, an aunt’s, or a grandparent’s stall. Maybe their families made the noodles or fish balls – back then a rather manual process. If you have drank kopi in a plastic bag with red strings, those strings where inserted and tied by mothers late at night after work, to earn that extra 1-2 cents per bag, while kids part played and part helped.

There are about 30,000 licensed hawkers in Singapore today, including the wet market stalls and non-cooked food, located in 106 hawker centers and hundreds more coffee shops. With a population of 3.2 million citizens, if you didn’t grew up in the “hawker industry”, a relative, close friend or your wife probably did.

It may be a ambitious claim, but I think hawkers is an institution, stabilising food prices and leveling social status. Today, we still have chicken rice at S$4 (and an award winning one), even as property prices are sky high and Singapore is ranked as one of the world’s most expensive city to live in. This high availability of S$4 chicken rice everywhere sets the price pressure on other food outlets, from air conditioned food courts to cafes. And whether you came in a Mercedes S class, or took the train, you queue like everyone else and possibly have to share the same table under the heat. 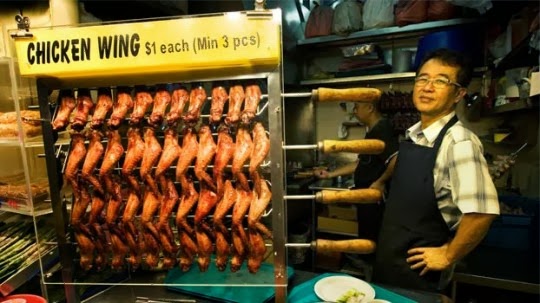 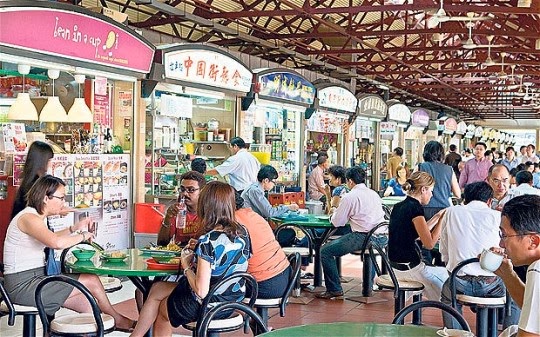 Hawkers have come a long way in Singapore. Just this weekend, an article in the Straits Times featured ten of the most famous chefs from the top restaurants in Singapore, both Singaporeans and foreigners. They were asked what they would eat when not cooking; what their favourite food are. Hawker stalls and award-winning restaurants were both mentioned. They would have breakfast in a coffee shop, lunch at a high end restaurant, and then dinner at a hawker center. It wasn’t surprising. Celebrities, and even the President and the Prime Minister of Singapore, regularly eat out at hawker centers too.

The satay seller
Coincidentally, Hong Teng’s uncle and my parents sold satay, a version of grilled skewed meat that is common in Southeast Asia. While the dish has a Malay / Javanese origin, it was typical of Singapore to interpret it by another culture. In our case, it was the Chinese version of the satay. What’s fascinating was the grill “machine” that was designed by my father. Built in 1987, it was possibly the only one in Singapore. While most satay sellers can grill 20-30 sticks each time, this grill can handle up to 80 sticks. The design had 3 glass panels by the side, sucked smoke from the top, and gave customers a view of the grilling at close range without hurting their eyes. Unfortunately, this “machine” became less useful as society progresses. As told through the story, less and less sticks were ordered as family units get smaller and less dependent on each other.

Much to my surprise and slight disappointment though, readers were fascinated by details about triads and their rituals than the hawker life. Looking back, I think it sort of affirms the familiarity of Singaporeans with hawkers. We were intrigued with the down to earth reason of triads’ existence, why many joined the triads, rather than the gory details of gang fights. Back in the 50s and 60s, many in kampongs would join these triads simply as a form of support structure, like a cooperative. We weren’t trying to justify the triads’ existence, as it was illegal and people got killed. However, many also looked to the triads to help settle disputes, for protection and as a means of living.

The strong bond cemented amongst the gang members during their youths continued till today. Often when I have beer with my parents’ friends at coffee shops, they would catch up with an old uncle or aunty passing by. I would find out later that this uncle or aunty used to be in a triad, and even from an opposing gang. You won’t be able to tell, for there was no tattoo, a fierce demeanor, or any appearance to suggest this person’s past. I have even heard of retired CID becoming acquaintance with old triad members, and attending funerals of each other’s family. While one may be catching the other in the 70s and 80s, they are now retired and just old friends.

There is a rich body of hawker stories in Singapore. We hope to continue telling stories like Ten Sticks And One Rice.
—
1 Acronym for the Housing Development Board, the government body responsible for building public housing where 80% of Singaporeans live in.
2 Acronym for National Service, a two-year full time compulsory conscription for all abled young men in Singapore. This is followed by 15-25 years of yearly In-Camp Training (ICT for short) of typically 2 weeks per year. 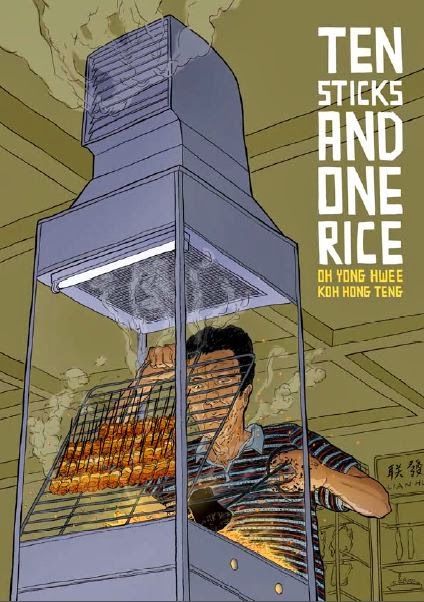 If Miel’s Scenegapore charted the history and development of Singapore, Oh Yong Hwee and Koh Hong Teng’s Ten Sticks and One Rice is a social commentary of the country in the 1970′s and an exploration of one of the features (as Oh Yong Hwee explained in his director’s commentary) that has in many ways come to define the country and its people: hawker stalls. Ostensibly though, it is about parent/children relationships and the generational divide bought on by social change and progression.

It’s rare in comics that you get a protagonist  in their 60′s but in Neo Hock Seng, a man who has at various stages in his life been an illegal bookie, a member of the Triads, a street hawker, this potted history is used to show us the man and his motivations as we watch him operate and interact in the present. His tired eyes and saggy cheeked, jowly visage reflecting the sweat and heat of the grill he manned for so many years. The death of Hock Seng’s friend finds him arranging the funeral, and determined to honour and respect the dead man in the correct manner, Hock Seng begins to bring people together in an elaborate, traditional send off the likes of which are now less frequently seen. 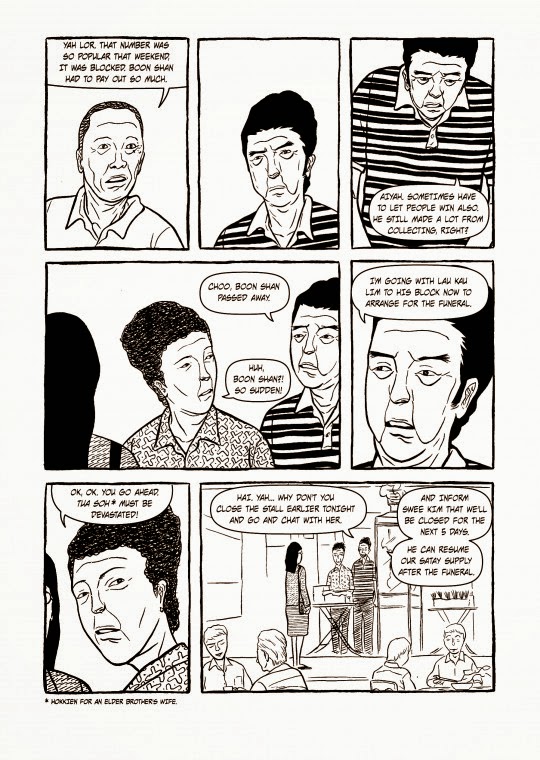 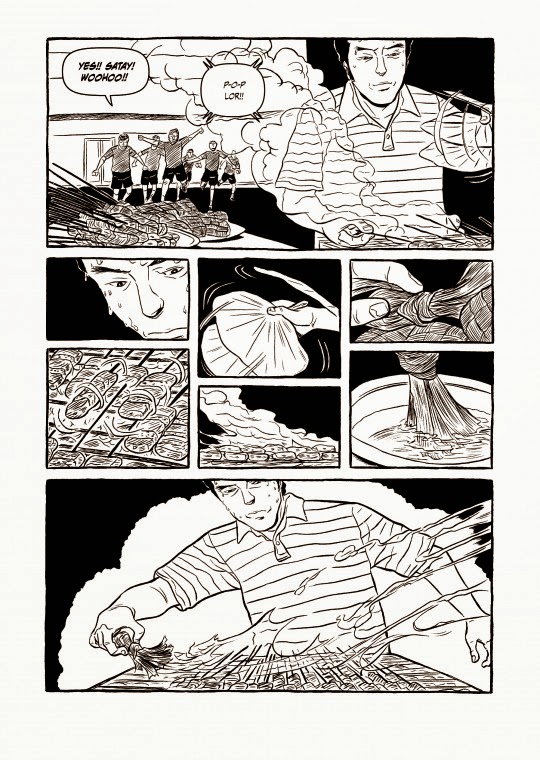 He calls his four adult sons to inform them of the funeral, expecting them to attend and help out at the wake, but their reactions are dismissive and indifferent. In between these preparations we are given flashbacks to Hock Seng’s youth and the roots of his friendship with Boon Shan. We see how as a young boy adopted by a hard and violent father, he joined the Triads as a means of identity and survival. The reader gets to see  how the hardships and lack of choices in his upbringing have led him down the roads he traversed, and can thus understand and empathise with him. Meanwhile, his children view him as an unfeeling, tough and difficult man and cannot fathom why their mother has stuck by him all these years; apparently oblivious of the social context and time in which their parents were raised and some of the things they had to do simply in order to survive: the triads meant food and money- a life of some sort. His wife, having been there for the whole journey can appreciate the difficulties and the knotty decisions made.

The disconnect between generations is highlighted in the slowly fading values and traditions of an ageing generation- Oh Yong Hwee wisely doesn’t romanticize these or present the old way as better, but appeals for an understanding: a social and cultural awareness, and a respect for the people and sacrifices that were made that led to the Singapore of today. This is mirrored in the realtionship Hock Seng has with his children, who fail to see that the quality of life they currently enjoy, the relative ease in which they live, has in no small part, been afforded to them through their father’s sacrifices and hard work. Ironically, Hock Seng’s children, for whom he has laboured so that they do not have an upbringing like his, instead painstakingly building a decent future, are the very ones who appreciate his efforts the least, viewing him as archaic and staid.

Ten Sticks and One Rice is neither a rose-tinted look at Singapore’s past, nor an indictment of its future, purporting a larger and widely applicable message of tolerance and understanding, across generational divides, of one's own history and struggles. Like its protagonist, it is an unsentimental essay on community, respect and the importance of social and cultural awareness, but it is not without heart.