Just a few longer new stories today instead of a regular round up.  I did a separate post of 'comics you should read' earlier in the week, if that's what you're after.

Fantagraphics launch a kickstarter campaign to fund next season of books 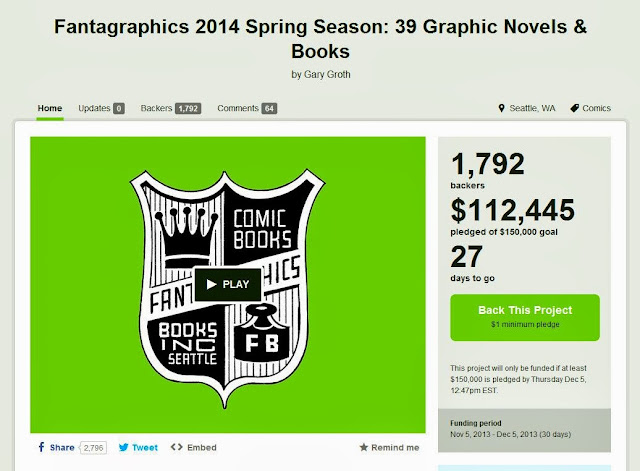 The big comics news of the week has been Fantagraphics launching a Kickstarter in order to crowd-fund financial support for their Spring 2014 season of books. The comics industry, despite it's idiosyncrasies and faults, is, from creators to fans, one of the most generous communities you'll encounter, as evidenced by the amount raised in 3 days- $112,445 from the target of $150,000. Fantagraphics are a historically and contextually important comics publisher whose contribution to comics is unquantifiable; it's difficult to imagine the landscape of the industry had they not been around, and as such anybody who is anybody in comics will tell you they support, and have most likely pledged towards this initiative. If anyone can trade on reputation, it's Fanta. The raised eyebrows came more from an existing skepticism and attitude towards crowd-funding and those who choose to go down that route, particularly where it concerns established publishers asking for money.

I'm more than happy to support Fantagraphics, and would encourage others to do the same- the array of books and rewards they've set-up are extensive and desirable- but there is a small 'what if' question that nudges at the back of the mind: what if this was 5 years ago and crowd-funding wasn't around- would this mean the end of the company or would they find an alternative method to keep afloat? How significant or serious are the issues that have caused this decision? Was it make or break, or a matter of raising needed funds quickly? Tom Spurgeon has a better break down of it here, with a Gary Groth interview to follow, but I guess ultimately, it's a bit of a moot question, because the option is available and they have taken to it and it's going very well. I'd imagine many other publishers are watching the campaign with interest.

Alec Berry also wrote a great piece on how the Fantagraphics Kickstarter highlights the fragility of the alternative comics structure, which I'd urge you to read. Hell, it even made the Guardian. 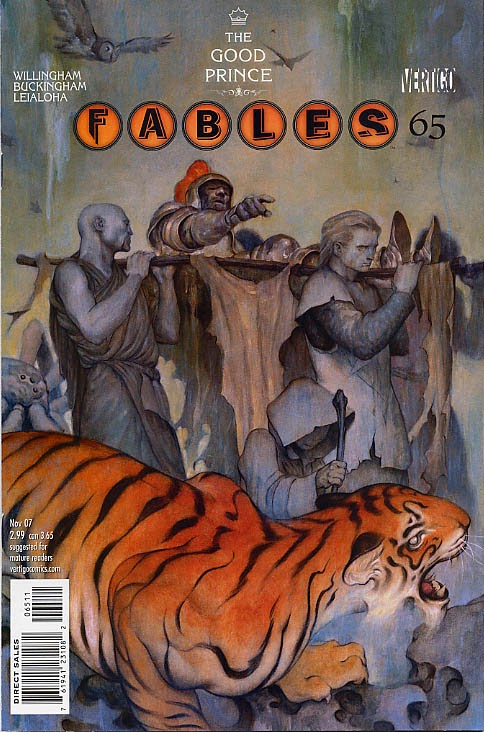 Bill Willingham announced the end of his hugely successful and much-loved Fables series earlier in the week. The comic will wrap up with issue #150, and the spin-off series, Fairest, will also conclude at the same time. I have a huge amount of love and respect for the Fables series- the first 12 trade paperbacks are to my mind, one of the most well-conceived, consistent, quality comic runs produced. I first picked up volume 5: Mean Seasons at my local library in 2005, at a time when I didn't read comics at all and went on to buy all the preceding books and then the subsequent volumes as they released. The series was one of my major pushes into comics-dom, and it remains a fantastic, accessible gateway book for non-comic readers. It's also simply one of the best fairytale re-tellings ever done, and did much to revive the genre (hello, Once Upon A Time). I'm glad it's ending while still going strong. Here's a snippet from Willingham's statement:

'After more than ten years of publication, and hundreds of issues of Fables, and various Fables-related works, I have decided the time has come to begin the process of bringing our sweeping story to a close. And, along the way, I’ve decided to retire from a great deal of my comics work.

Retirement in the storytelling trade means, still working and writing every day, but being a bit more selective in what projects I take on. Pushing 60, I thought it would be a good time to start making concrete plans for those remaining good writing years.

Let me restate my thanks to the best, sustained readership in all of comics. I promise to do my best to make the coming year in Fables a great one.' 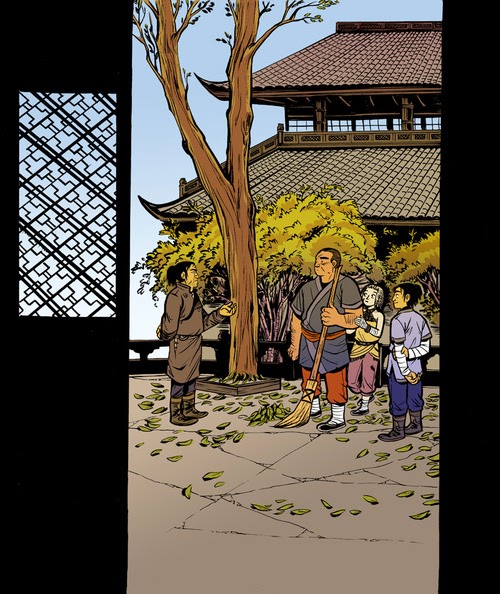 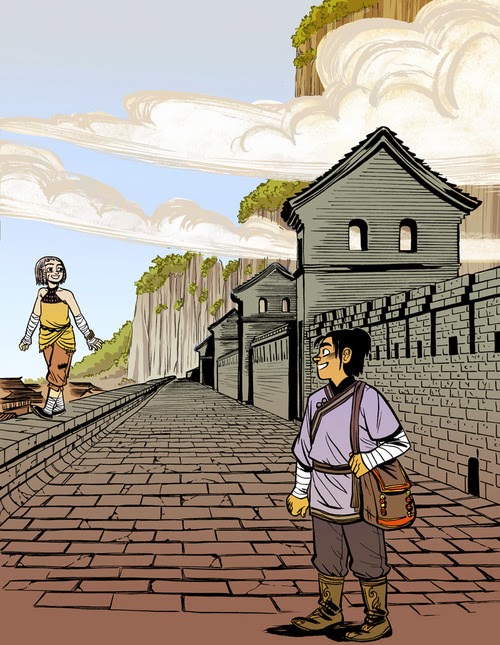 In the other big comics news of the week, cartoonist Faith Erin Hicks (Friends with Boys, Nothing Possibly Can Go Wrong, The Last of Us), signed a 6 figure, 3 book deal with publishers First Second. Titled 'The Nameless City' the books will form a trilogy, of which the first has a projected release date of 2016. The story is a genre hybrid of historical fantasy, centering around the friendship of Rat and Kai, the former a native of the city which Kai's people have just conquered in order to discover the secrets of its previous dwellers. More pages and character designs below, as well as reactions from hicks and First Second editor, Calisat Brill.

' “I’m absolutely thrilled that First Second Books will be publishing The Nameless City. It’s a story that’s very close to my heart and something I’ve been working on for a few years. To see my comic sitting beside incredible books like Battling Boy, Delilah Dirk, and Boxers & Saints means a tremendous amount. I’m a fan of First Second, both as a publisher who publishes great comics that I want to read, and also as a group of creative people who know how to bring out the best in a cartoonist. We’re going to make some really good comics together in the next few years,” says Faith Erin Hicks.

“Faith Erin Hicks is one of the most exciting cartoonists working today, and her work has raised the bar in comics for kids and teens.  I’m so excited that First Second will be publishing her new series! With notes of Avatar: The Last Airbender, Lloyd Alexander’s Prydain, and Ursula K. LeGuin’s Earthsea, Faith has woven a world that is uniquely hers, and uniquely beautiful,” says :01 Senior Editor Calista Brill, who acquired the project.' 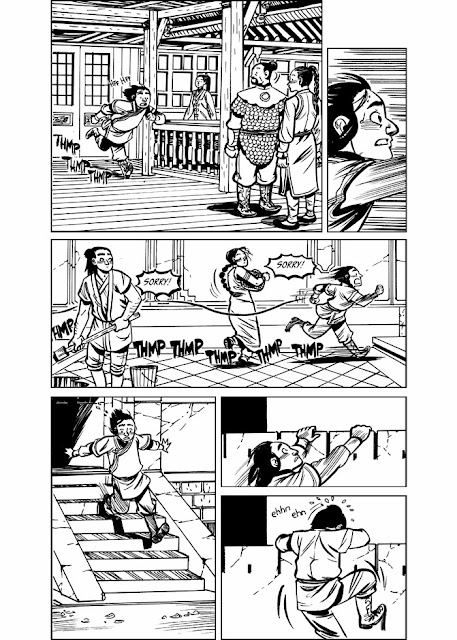 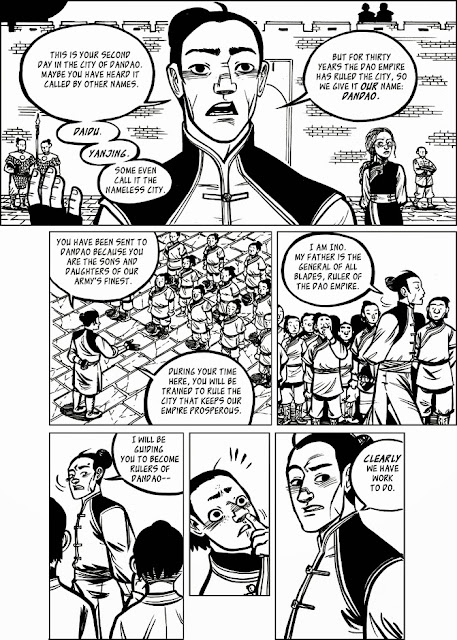 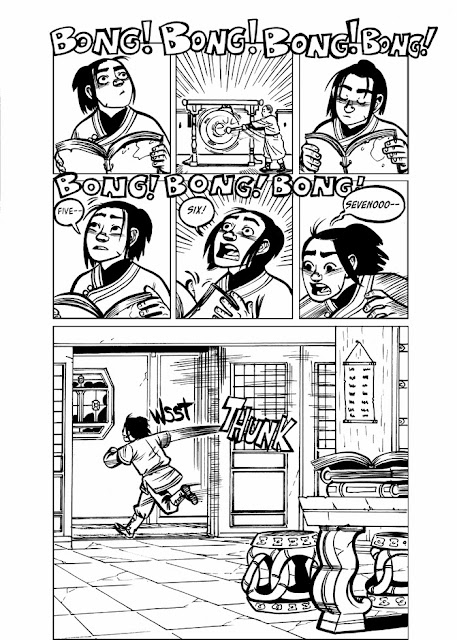