I came across Projeto Mil (Project One Thousand) via the excellent Impossible Books, who continue to do a stand-up job of curating the most interesting small press comics from around the world. Projeto Mil was conceived by Brazilian  micro press, Cachalote, with the aim of  creating a series of silent comics that would provide participating artists with an opportunity for experimentation, to test new narrative structures solely   through the use of images. Each comic is by a different artist, with production limited to 300 copies, is A4 in size, and printed on different coloured paper,  a colour that usually connotes with the story in some way. 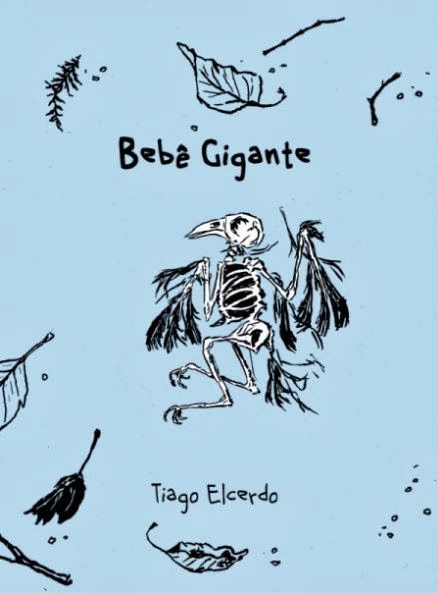 
Bebe Gigante is a simple story, masterfully told.  A man, hunting for food in the woods nearby his home, comes across a gigantic baby. The baby is a) colossal, b) has razor sharp pointed teeth, and c) is enthusiastically devouring what appears to be a raw rabbit. Despite this, the man takes the baby home to his wife, who, upon hearing her husband arriving, leaves the grave stone she is kneeling at to go meet him.  The reader infers that the couple have lost a child or baby of their own, hence their embracing of the new discovery. They baptise the baby and hold a christening, but soon find nothing will sate his appetite other than raw, freshly caught meat- fish, deer, and keep him adequately supplied. The boy grows under the protection of his adoptive parents, simple, a little sheltered, but harmless, until an incident in the village provokes him to lash out, and causes the family to flee.

Elcerdo paces the book beautifully; it moves seamlessly on-course, there's very much a sense of watching it play out silently, in beats, events unfolding rapidly, enhanced partly due to familairity with the fairy-tale elements of the narrative- the taking in of a lost being, his outsider status, people turning on him, the 'beast' being driven out. Earlier in the week, I talked about how the mind translates pictures into words, offering a running narrative, but this is different, like one of those silhouetted preface sequences that you often get in animated films: a zoom-in of a baby in a a basket, pull-out to baby at home in parents arms, stop-motion shot as he develops and grows, catalytic event, angry accusations, fearful faces, running crowds of townspeople with pitchforks and fire, swelling dramatic music. Bebe reads with such swift ease that there isn't a need for words, written or conjured. It's one of the very few comics I read that felt silent, in that I wasn't attempting to mentally embellish it further.

The family chance upon a little cabin in the woods and hide for the night, aware of the lynch mob licking ever closer. Tucking up their son upstairs, the husband and wife sit together to try and find a way towards which they can turn. A crash above stirs them, and they rush upstairs to find the window smashed from the inside and the boy gone. 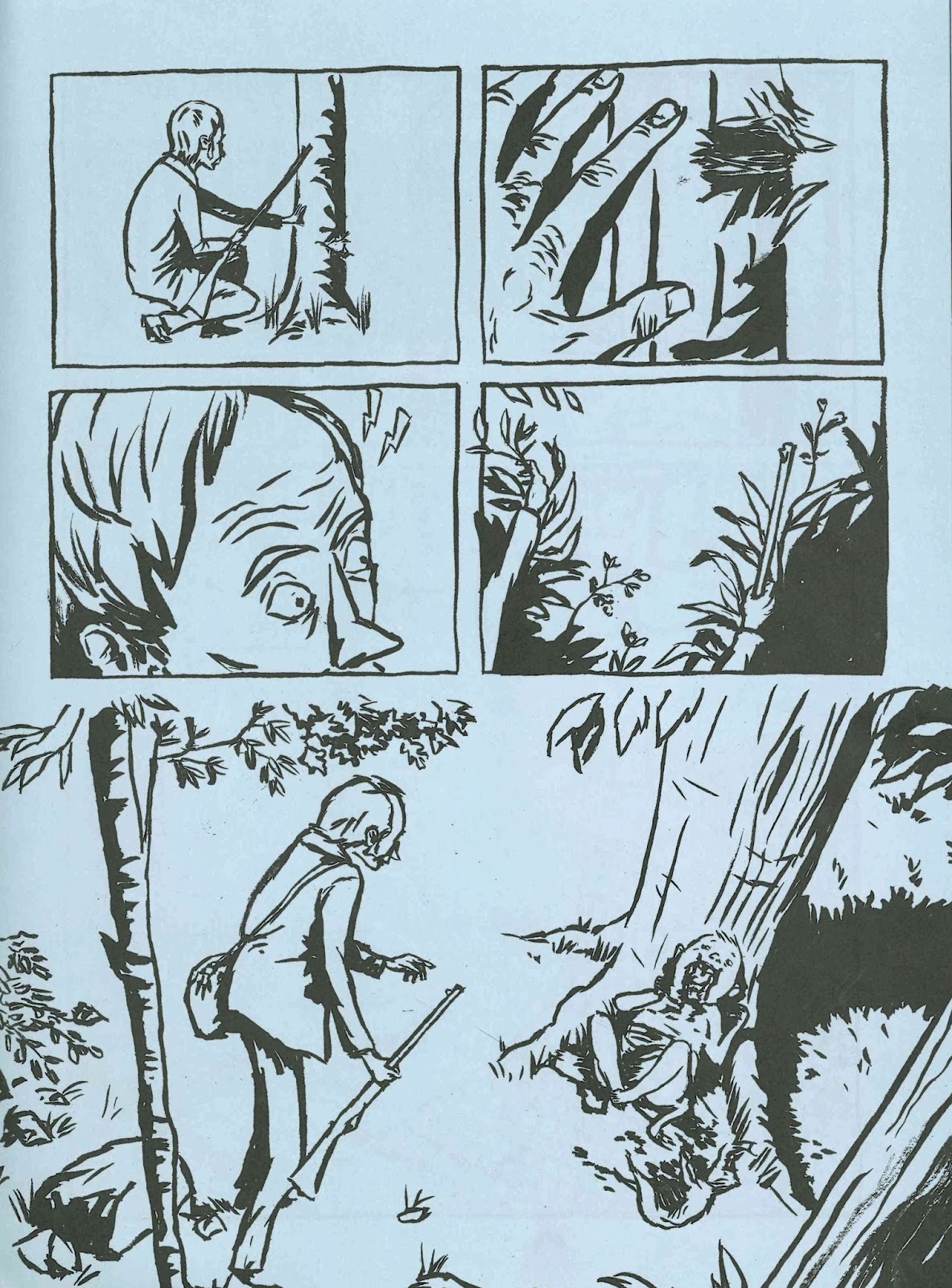 A simple story, but the crux of Bebe is that it is so human, so inevitable in its emotions and reactions. The loss and grief of the couple, the man who brings the baby home despite (from his expression) knowing he is something different, something that won't fit in. Their constant bated apprehension, waiting for something to happen, the shoe to drop, which Elcerdo conveys tersely in their expressions and body language -never once are they shown smiling, their belief that things will be okay, the progressive shunning, fear and quick judgement of the villagers. One of the aspects of Bebe being narratively linear and traditional, is a pushback from the reader in expecting things to perhaps play out differently at various points. Could this have played out in any other way? Did you think this could have ended differently, asks Elcerdo quietly.

The boy's actions at the end are left open to interpretation: did he escape in an act for survival, or in an act of selflessness, recognising he could no longer live with his parents and leaving to protect them. It's that thing of deciding person is a certain way, in this case, bad or monstrous because he looks and behaves differently, and then consistently treating it as such until there's either capitulation from the subject, or something occurs that fits in with that perception, consolidating the prejudice. Is it the boy's nature that takes over, or does he simply react as many would in similar circumstances. Was it only a matter of time before his nature revealed itself? The thing they deem monstrous in the end proved to be as human as them- in his instinct for survival, or better, in his desire to protect the people who loved and cared for him. Or perhaps that's wrong. In keeping the boy alive and escaping to live on, there's room for expansion of thought- the reader's loyalties are not as strongly aligned as say, a vengeful death by lynching would make them.  Maybe the couple were naive to think they could change his nature, and wrong to interfere and putting him in an untenable position, where he's disliked for what he is and dismissed for not being enough of what others want him to be.

There's satisfaction, too, to be had from Elcerdo's art which is sublimely judged; the space in the drawings, the sparsity of additional elements and information, his strokes soft and impressionistic, never intrusive, never overdone, the black sitting nicely on the soft blue of the paper. Bebe Gigante is a deft tale that asks you to examine people and humanity, with the conclusions you come to ostensibly reflecting something of your own. 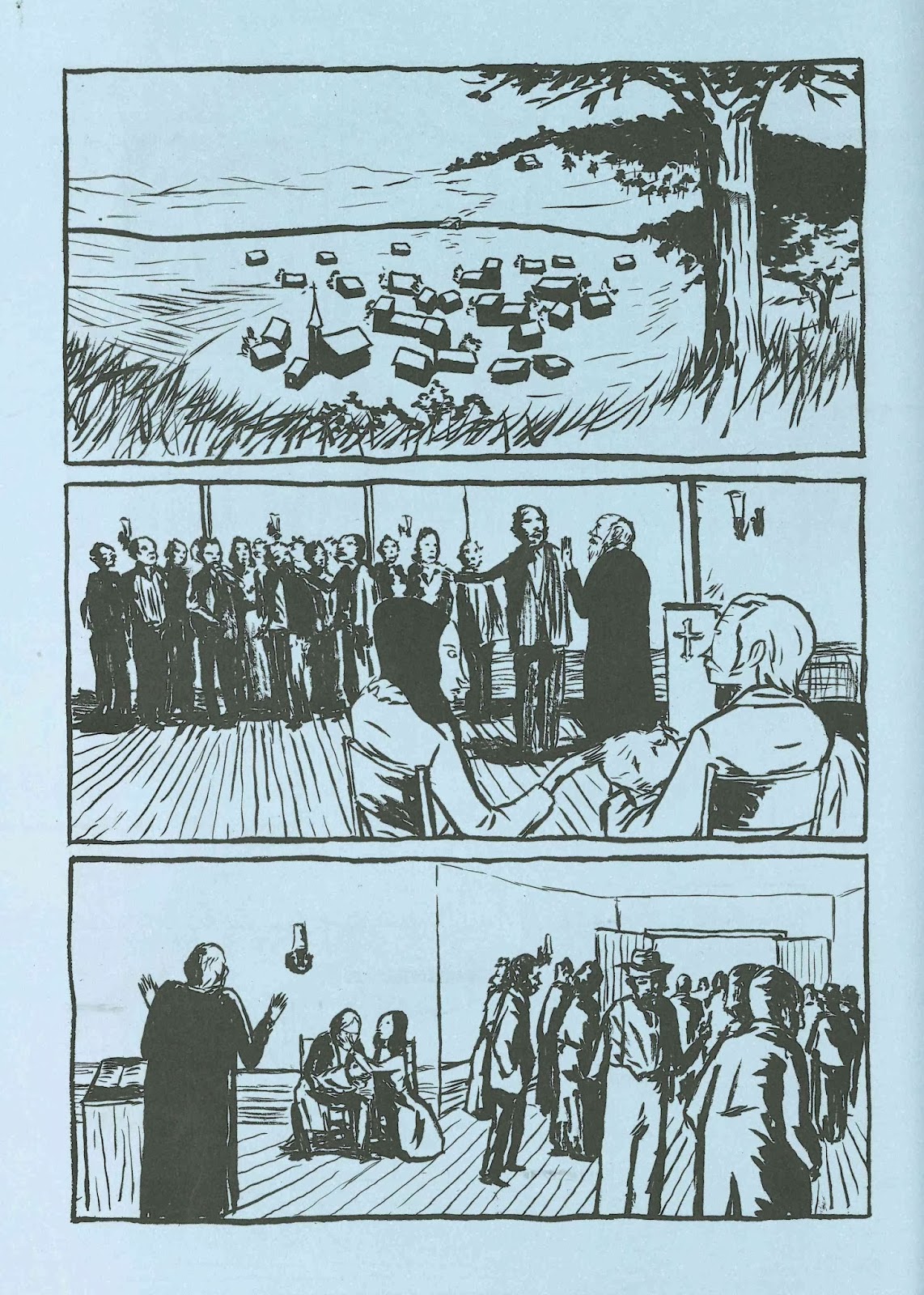