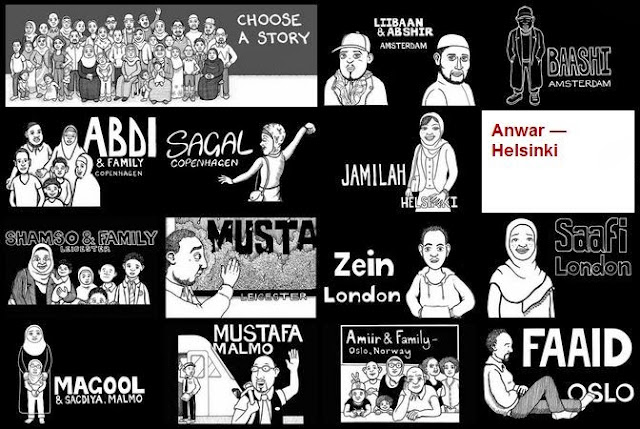 BBC News Magazine bought my attention to this fantastic series of  illustrated narratives commissioned by the Open Society Foundations’ 'At Home in Europe' Project. Titled 'Meet the Somalis' the comics tell the stories of various Somali immigrants and refugees, and their experiences of living in their adopted lands of Amsterdam, Copenhagen, Helsinki, Leicester, London, Malmo, and Oslo. The stories were narrated by Somali people of diverse backgrounds to journalist Benjamin Dix during a six-month period in 2013, and  then drawn by artist Lindsay Pollock, and are must-read material.


'The Somali community in Europe is a vibrant, diverse minority group, including people of Somali origin born in Europe, Somali refugees and asylum seekers, and Somalis who have migrated from one country in Europe to another. There are no accurate figures for the number of Somalis in Europe, but on the whole they are among one of the largest minority groups.'

Not only do they narrate individual experiences, but they're remarkable also in their commonalities: the difficulties of belonging to and balancing two cultures, striving to 'assimilate' and the struggle for acceptance, the prejudices faced, the shared thread of what it means to be black.I'm not sure how subjective my response to these comics is, considering I cried at over half of them, but I would urge you to read them to get a glimpse of what people have to face when they're uprooted to another country, sometimes through no choice of their own, to get a small feeling of what people of colour are still up against.

My dad came here in the 60's as a child and left school at 14 to work in a foundry, so that he could support himself better, circumstances which continued after he got married and had children- menial labour, crap jobs: taxi driver, take-away worker, doing GCSE's, A-levels, courses on the side. He eventually fulfilled his desire for a 'proper' education when he attended university as a mature student in his 30's. My mum spent her time raising her children and helping him to provide us with I know many people are often perplexed at the tight-knight familial culture and deference in Asian and BME families, but I have had the most comfortable and easy life, with every opportunity available to me because of the huge, HUGE sacrifices my parents made. They came to the UK simply because they wished for a better quality of life, but I don't know that grafting, slogging, living in rubbish housing, and putting up with -make no mistake- a shit load of racism and prejudice, for the best years of their youth necessarily gave that to them. Somewhere along the line, it became clear that that desire for a better life wasn't going to be achievable for them, so they did the best they could to ensure that it would be possible for their children.

Amir's story in particular struck a deep, resonant chord, reflecting the cultural and generational gap perfectly;  first generation immigrants who are eager to instill and pass on their cultural history and heritage to their children, and the second generation children who identify with two cultures (generally more so with the country of their birth) and form unique new cultural identities which don't really belong to either. The irony, in my experience, is that neither one truly sees you as belonging to either. I travel back to Pakistan, a country I have an interest in due to my heritage and it's importance to my parents, but the people there view me as foreign, and here in England, as Mulsim Pakistani, I'm not really accepted as British either.

It tires me and depresses me and angers me to see a constant, insidious (or if you're the Daily Mail, a wee bit less insidious) ideology against immigrants and the negative manner in which they're portrayed and depicted as lazy, or scary, or job-thieves, terrorists, always as the proverbial other- take your pick. It's rarely true and the way to overcome those narratives is educate people and instill an understanding around these issues. Reading things such as these comics are vital to understanding and education and that leads to greater tolerance, which is all anyone can ask for. It always pleases me to see the medium being used in wider contexts too. So read Amir's story, read Saafi's story, read Zein's story, read about people. Read and understand and learn.

You can read all 14 comics here, where you can also download the whole set of narratives for free. 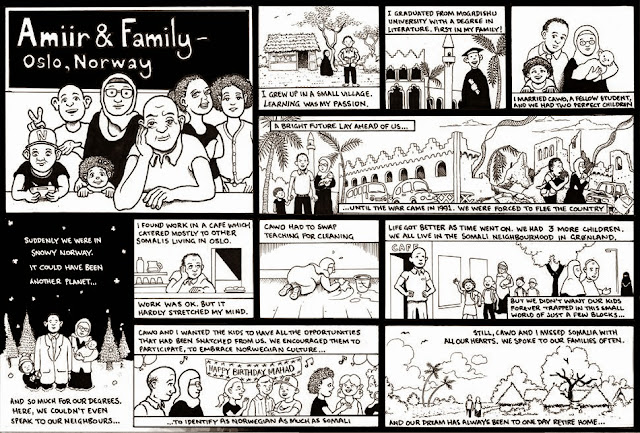