Firstly: apologies for the slight lack in blogging: Thought Bubble was crazy and I've had a lot to do concerning that, and then I got bloody con flu, and on top of that I actually had to go to work (disgusting, I know). Anyhow, it's been over a month since I bought Rafael Coutinho's Teen Kiss from Impossible Books, and I only got around to taking it out from it's packaging this morning. Coutinho's Brazilian and this was published by Brazilian small press comics publishers, Cacholte- also of those Projeto Mil comics previously covered here. I haven't read it yet, but I thought I'd put together a quick photo-post to show you some pages and panels with brief annotations because it looks simply amazing. (I'm sorry the pictures are crap; after 3 years my photo-taking skills show zero signs of improvement).

It's actually slightly under A3 in length, 24 by 40 cm in size, I've put a clothes hanger next to it in the second picture to give more of an idea of perspective. That's the cover below- one of the things I find interesting and really appealing is how Coutinho uses geometric shapes with his fine lined loose drawing style, just inserting shafts and squares of them here and there, although not randomly- the setting of them side-by-side, along with his colours is kaleidoscopic, and make your brain's eye shift a little. 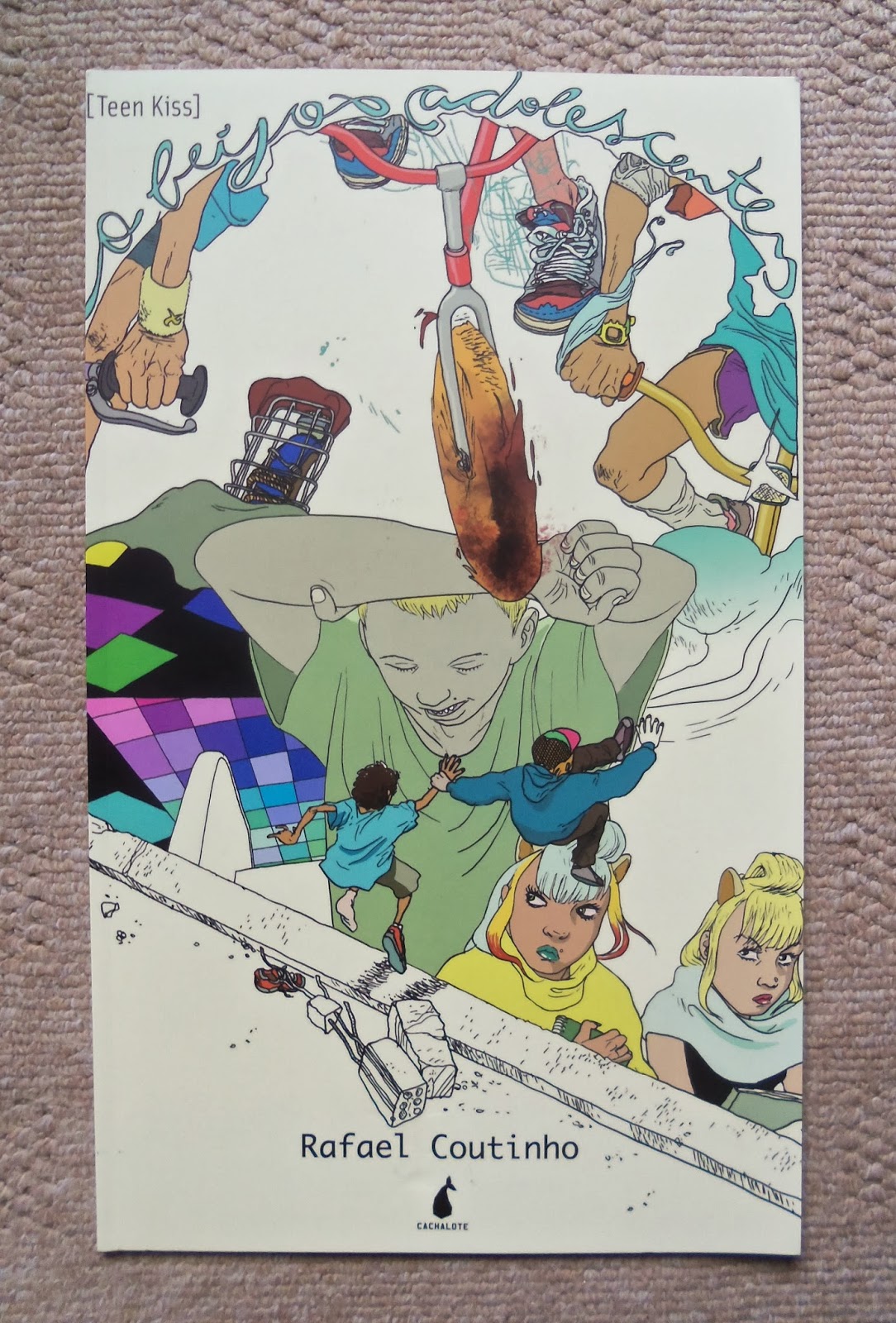 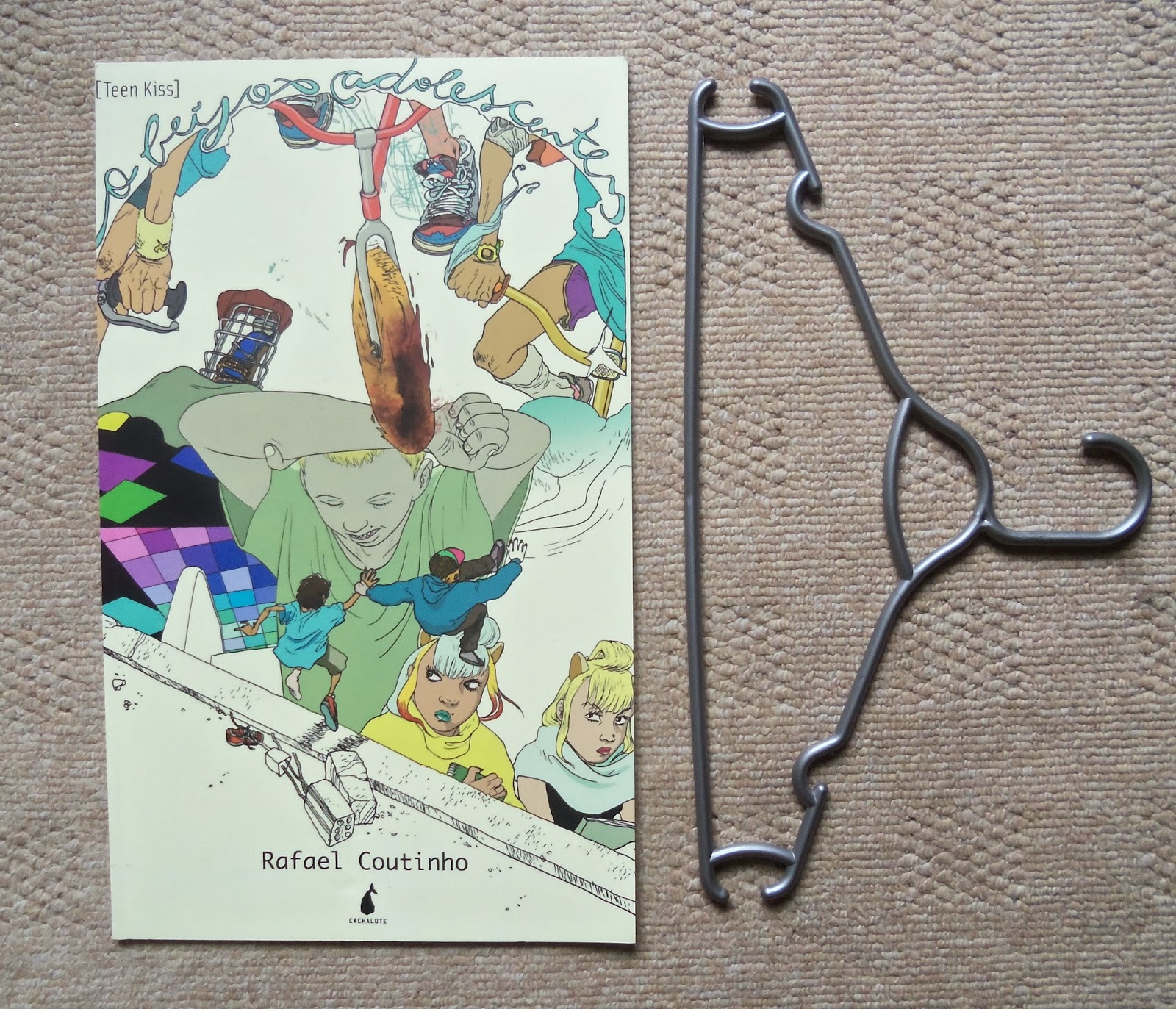 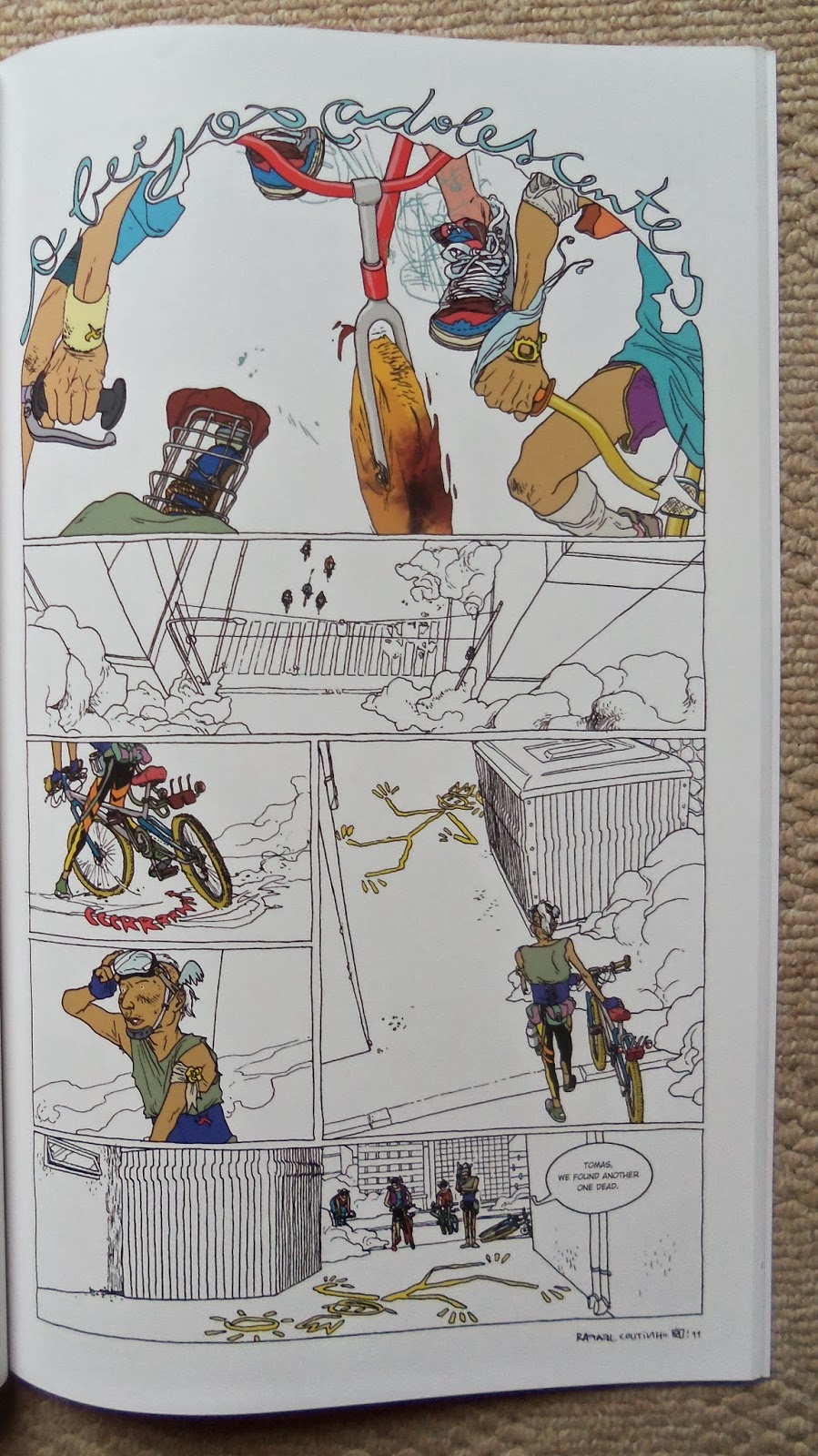 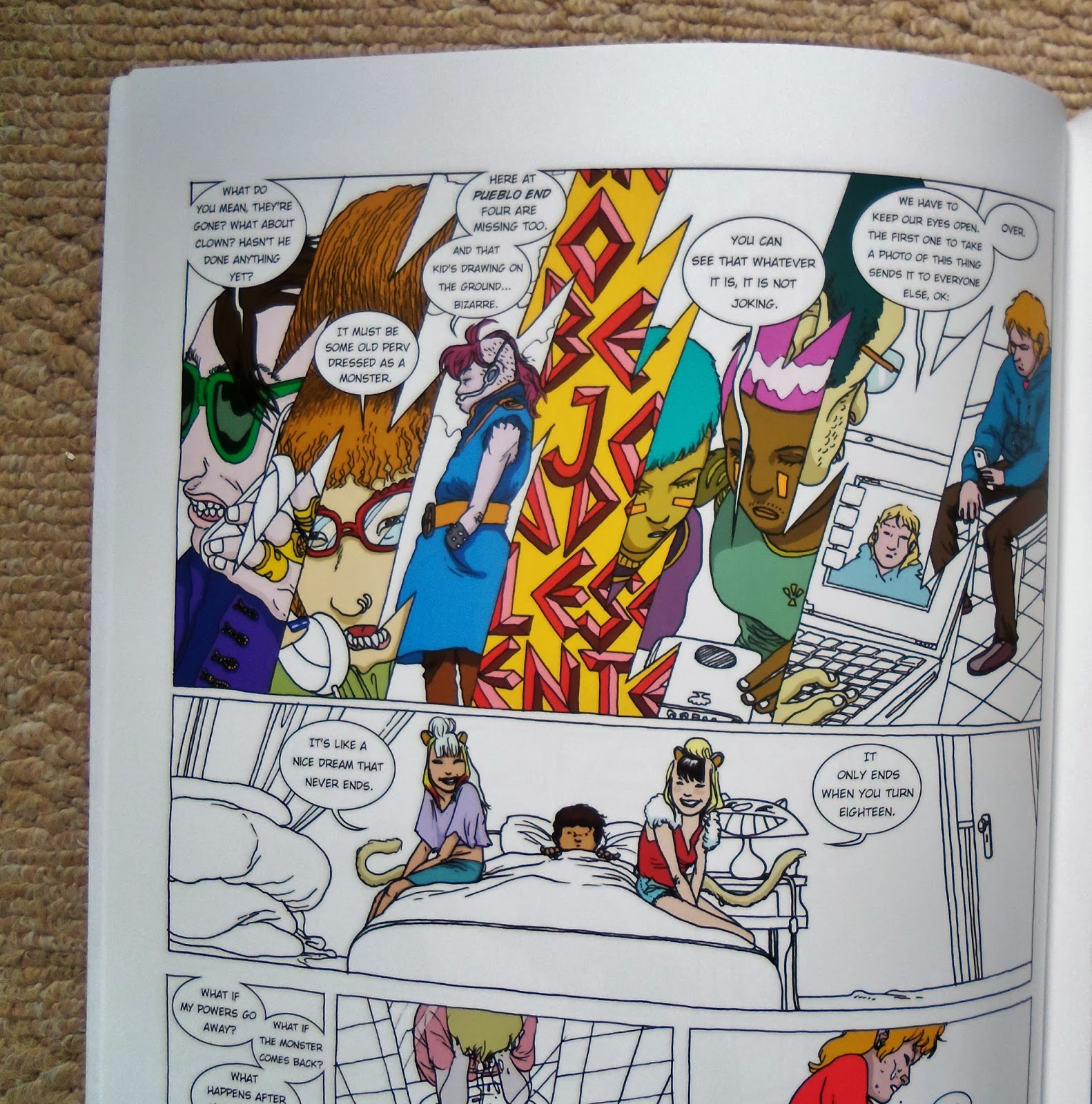 I feel like I've seen this technique before, and yet nothing springs to mind: rendering large parts of background in black and white and colouring in characters or lettering, or specific elements and objects. It makes the black and white scapes seem less alive, particularly as the pops of colour are so bright and vivid- in the page below, for example, the blues of the boys clothing against all that white immediately leap out at you. I love that he plays around with lettering so much, too- different fonts, moulding it into various shapes, experimenting with placement: below you've got the thin, yellow ominous font floating over the feral dogs, then the multi-coloured bubble font stretching over the city. 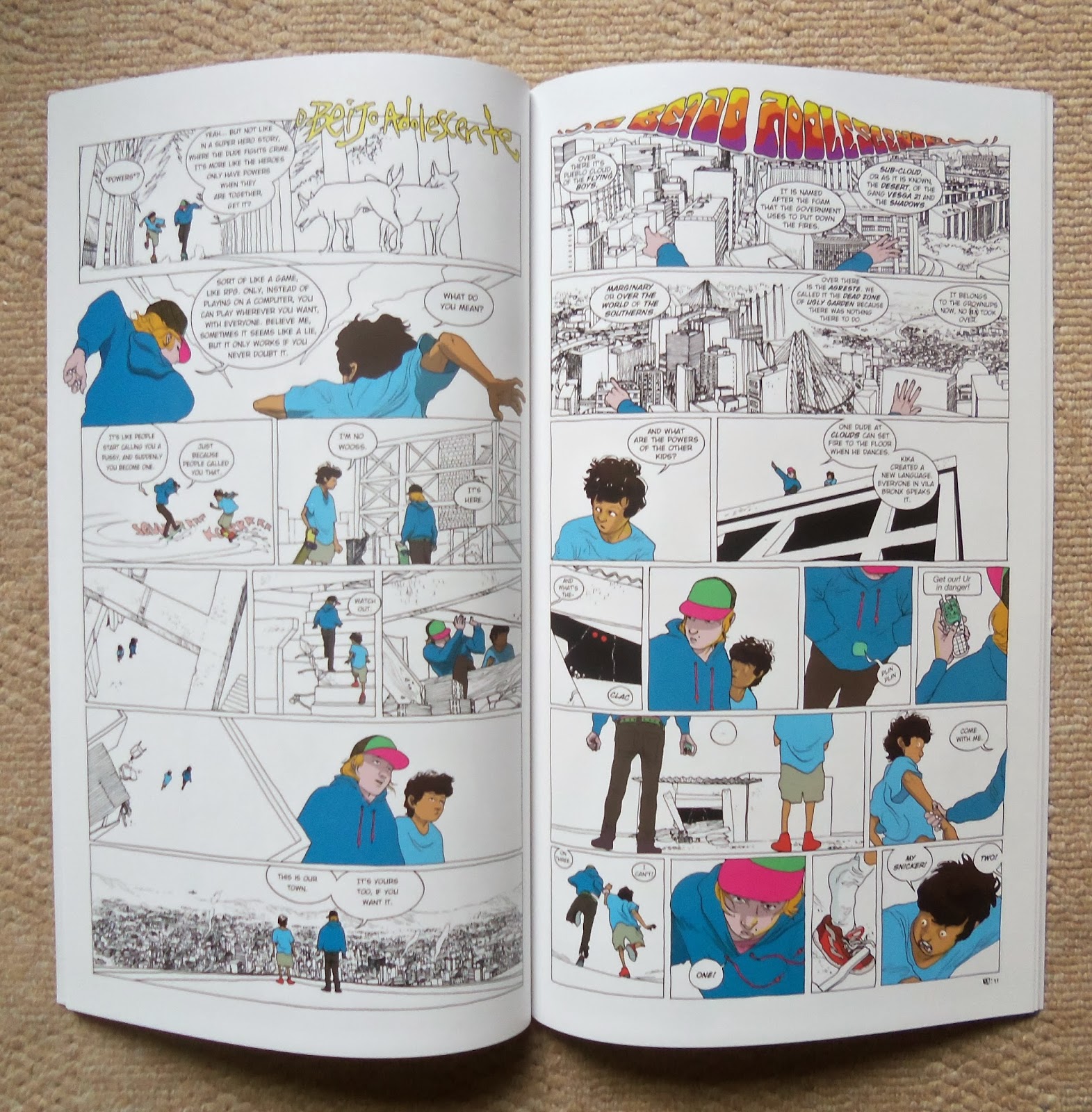 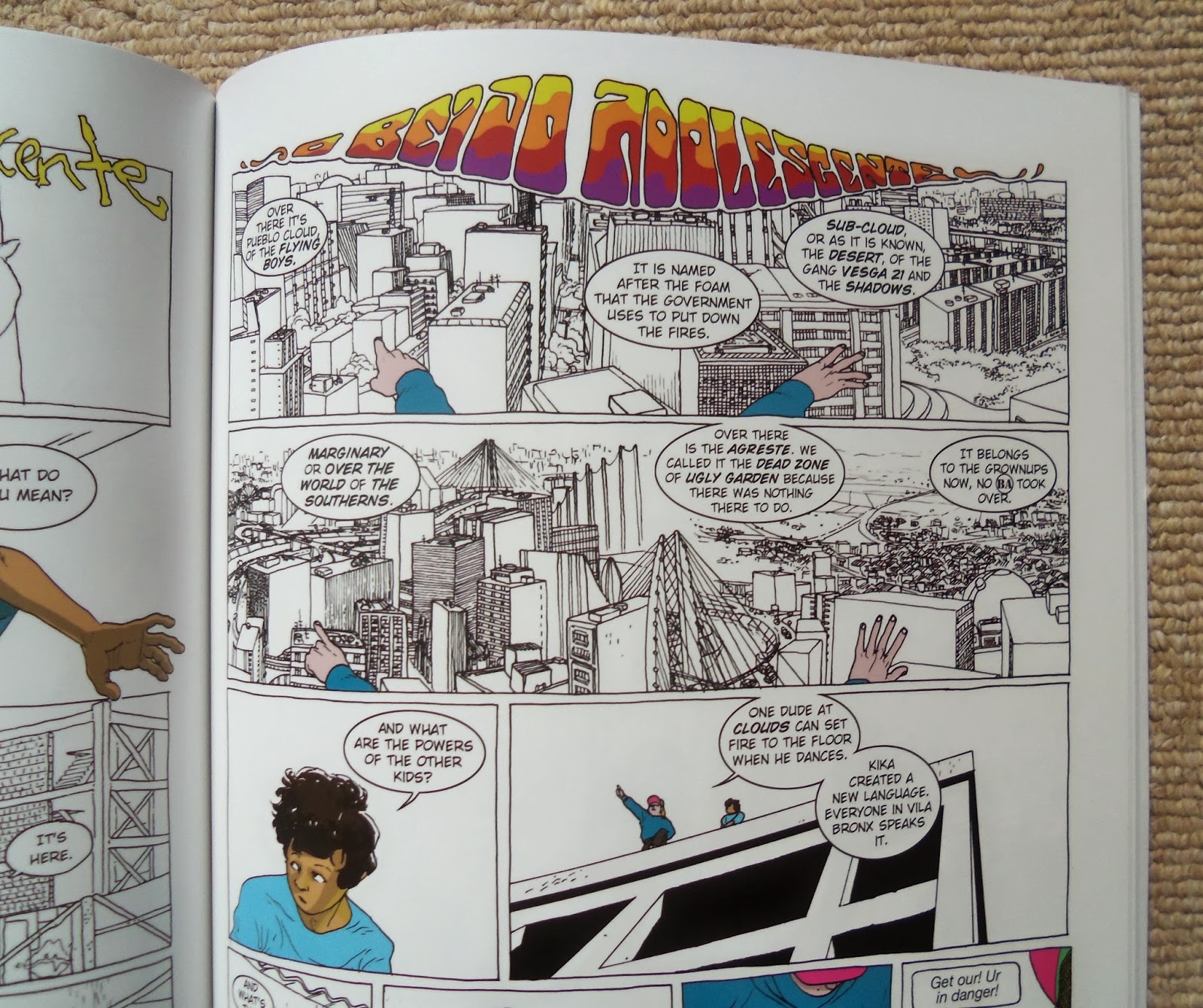 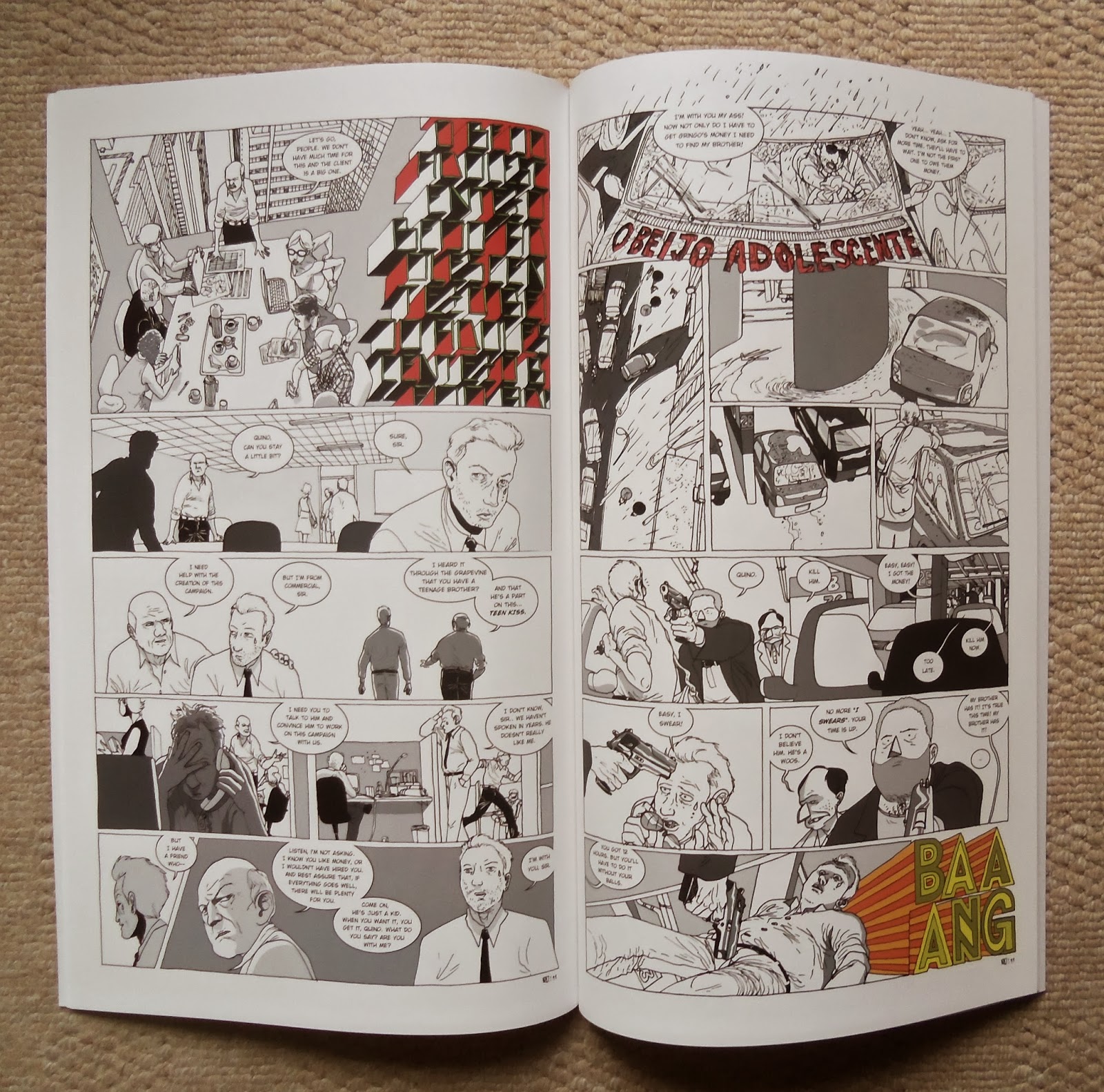 The lettering here, in the pics above and below, is fantastic: the red/black wall block grid, and that 3-D 'BANG' sound effect: again the only coloured elements on the page. 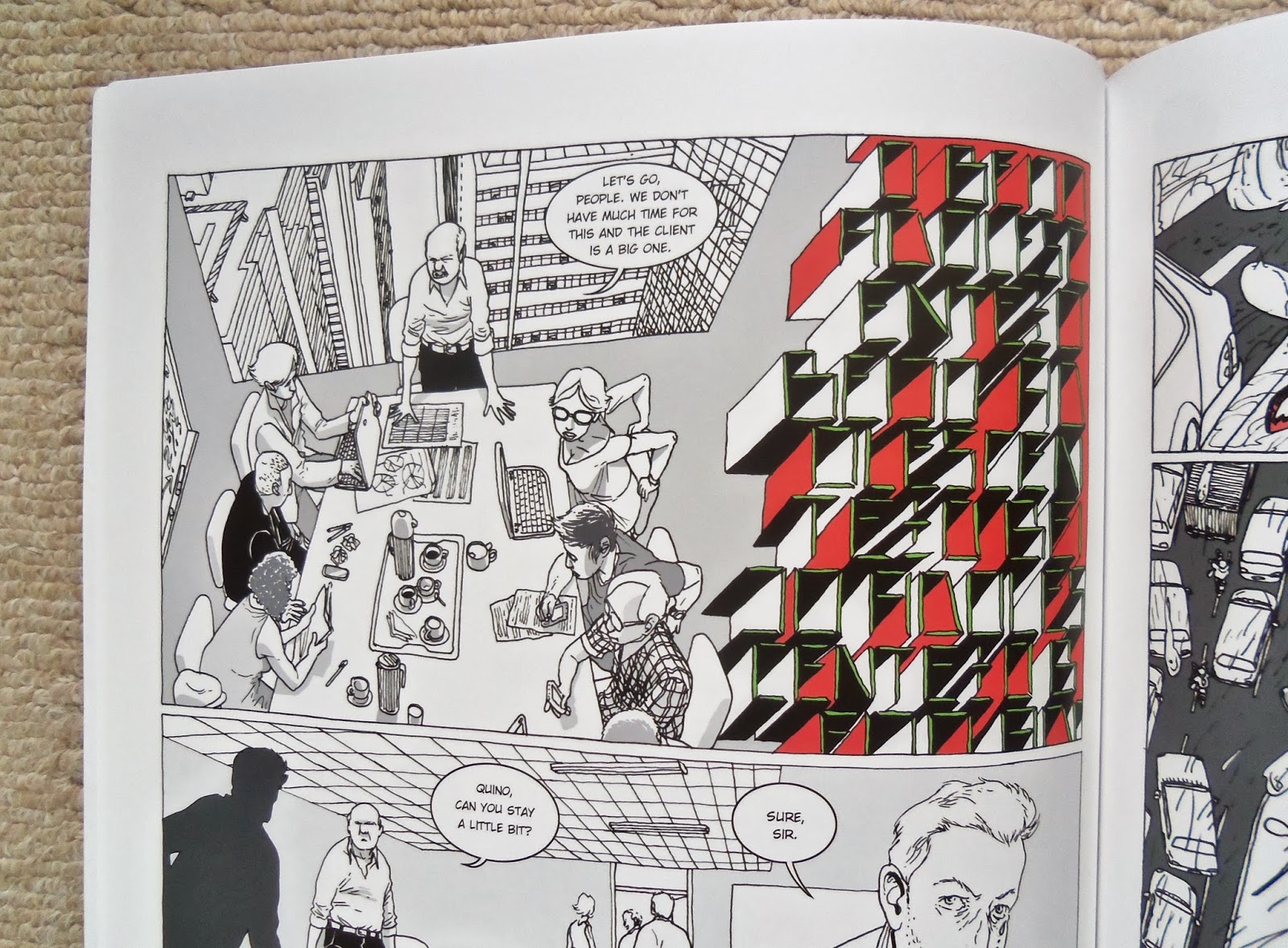 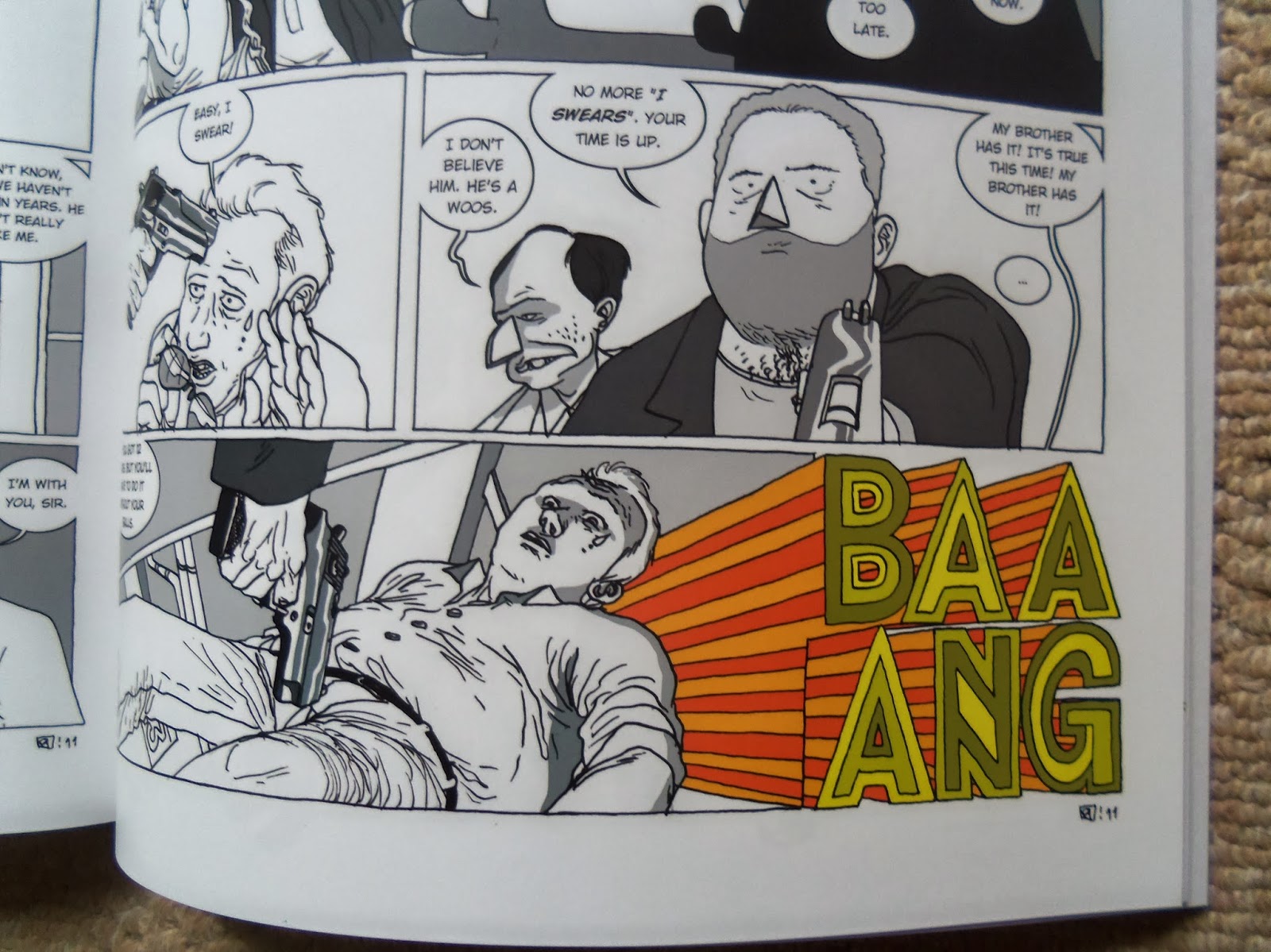 Below 2 images: I just love the colours here, the positioning and angle of the group crowd shot, the costumes is crazily good. That final image evoke a psychedelic disco dance floor theme (again with the tiled ceiling and the angular strobe lights): I find that panel in which the man is holding a gun to someone's head interesting in that colour, and therefore emphasis, is placed on the would-be victim with his bowed head instead of the shooter, which takes away his power in a sense. 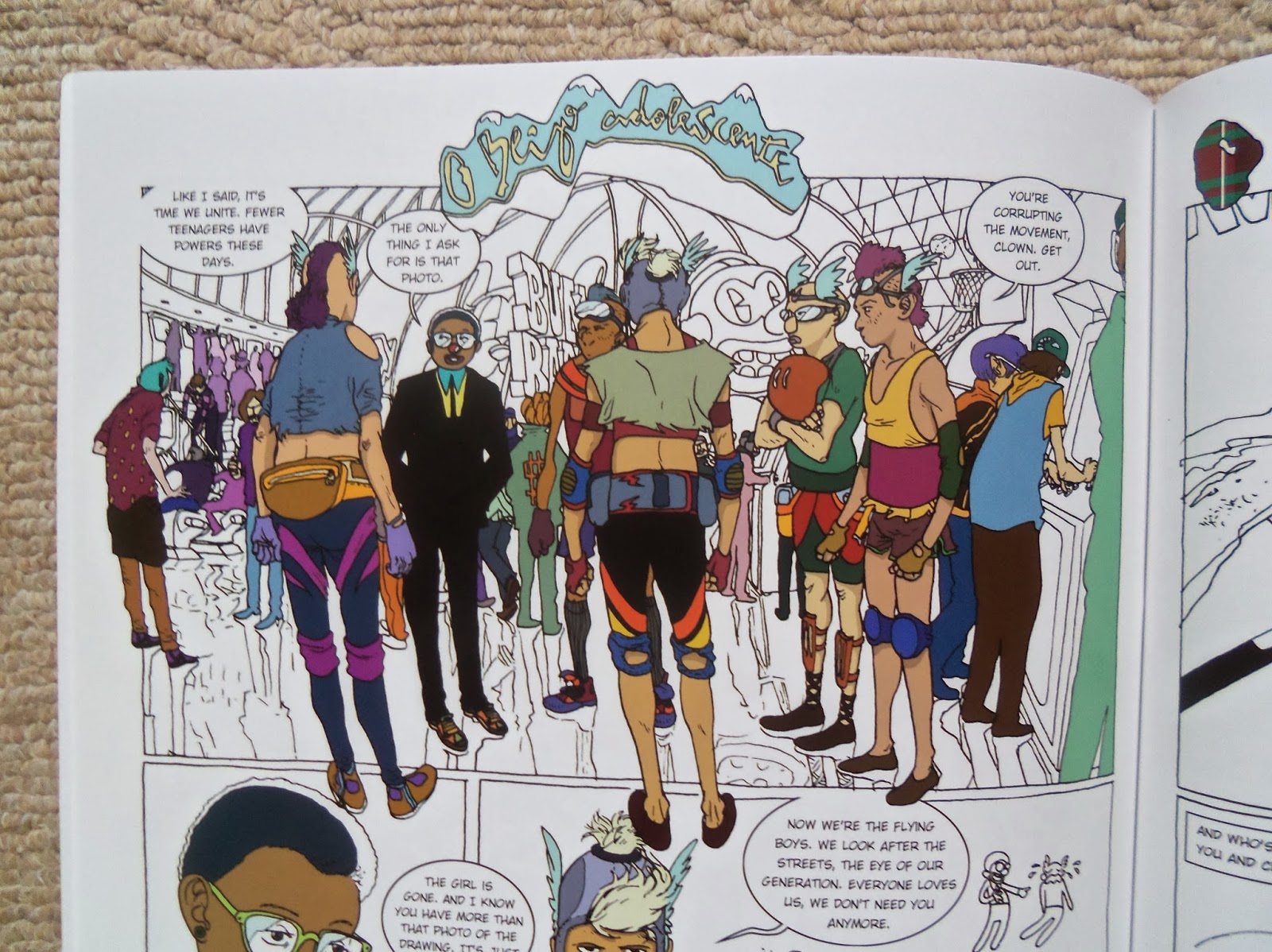 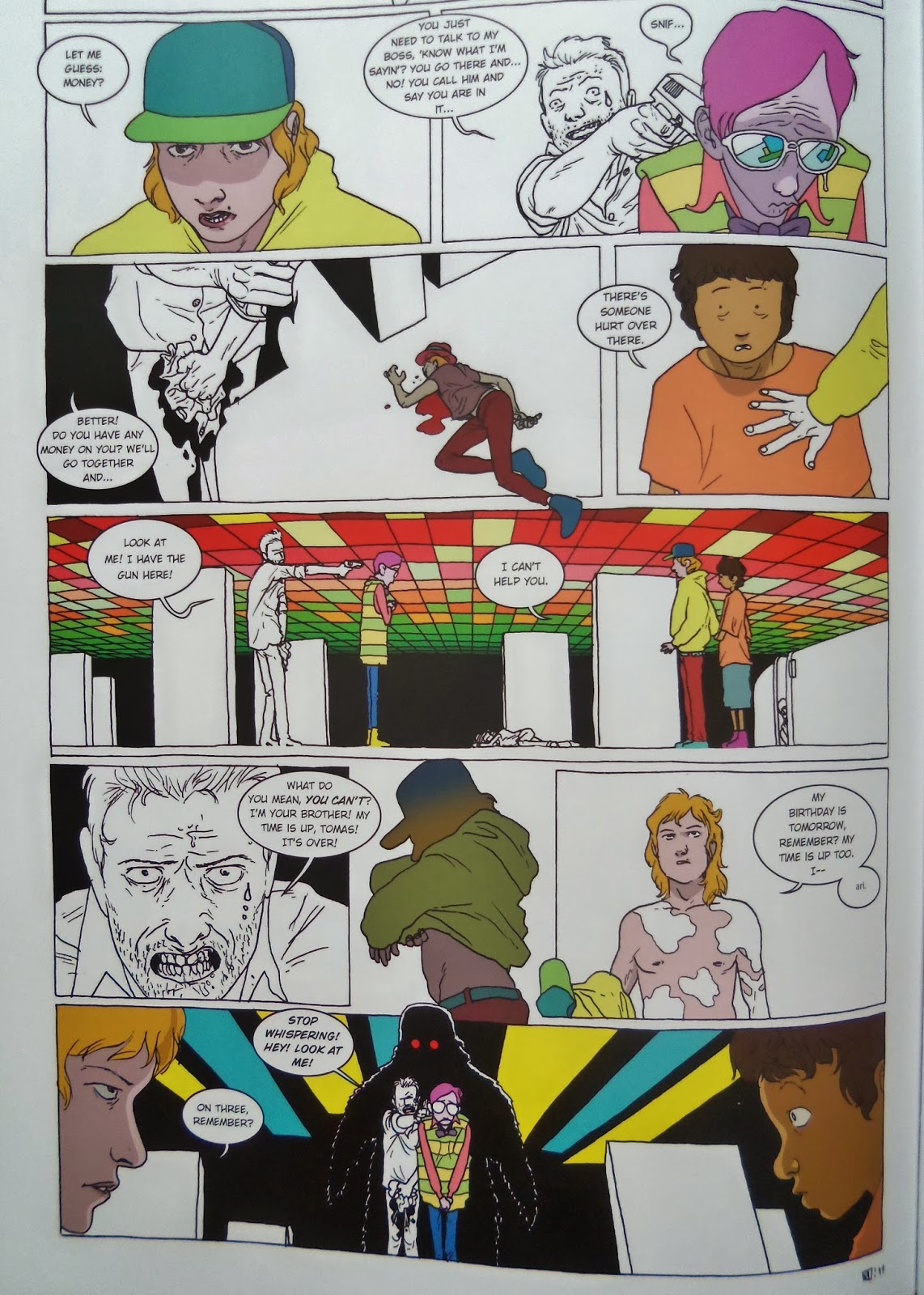 Seriously, this looks absolutely superb, and you should go buy it now. Here's a brief synopsis from the Impossible Books site: 'The first volume of Rafael Coutinho's saga 'Teen Kiss' in this stunning oversized edition tells the story of a gang of kids who call themselves 'The Teen Kiss', where every member has some sort of superpower or special ability manifested early in adolescence, generally after their first kiss.'