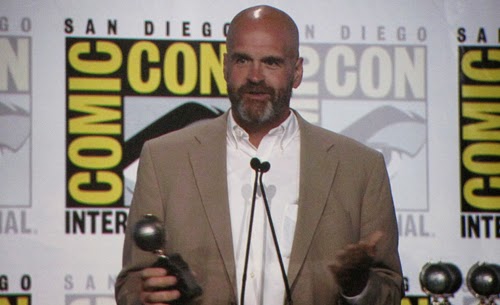 Tom Spurgeon always does these 'Happy Birthday' features for comics figures on his site, The Comics Reporter, so I thought it'd be nice to do one for him on his birthday. I was going to talk a little about what his work means to me, but I always end up blathering about myself, and I'd like to keep this about Tom.

As I have found in the last 3 months with my own shoddy efforts, maintaining a website that updates daily on your own is bloody hard work, even putting up fluff pieces, but with The Comics Reporter, Tom provides a service to comics truly unlike anyone else: he has news, announcements, reviews, stupendously thorough con reports, and all the usual trappings, but what's invaluable is the knowledge he brings to the commentary he provides alongside these articles, breaking down events and goings on in thoughtful and dispensable chunks. While he may joke about it on Twitter, a major reasons he's one of the most respected people in comics is the sincere, unpatronising widespread coverage of genres and areas, and which has helped The Comics Reporter stay relevant (say over The Comics Journal, which, to my mind, isn't as accessible to people). For comics fans, creators and writers, The Comics Reporter remains a barometer of quality- the site to aspire to, and as it's his birthday, I thought I'd take the opportunity to say a big thank you for all that he does.

As the kids say, Tom: mad props, and a very happy birthday.