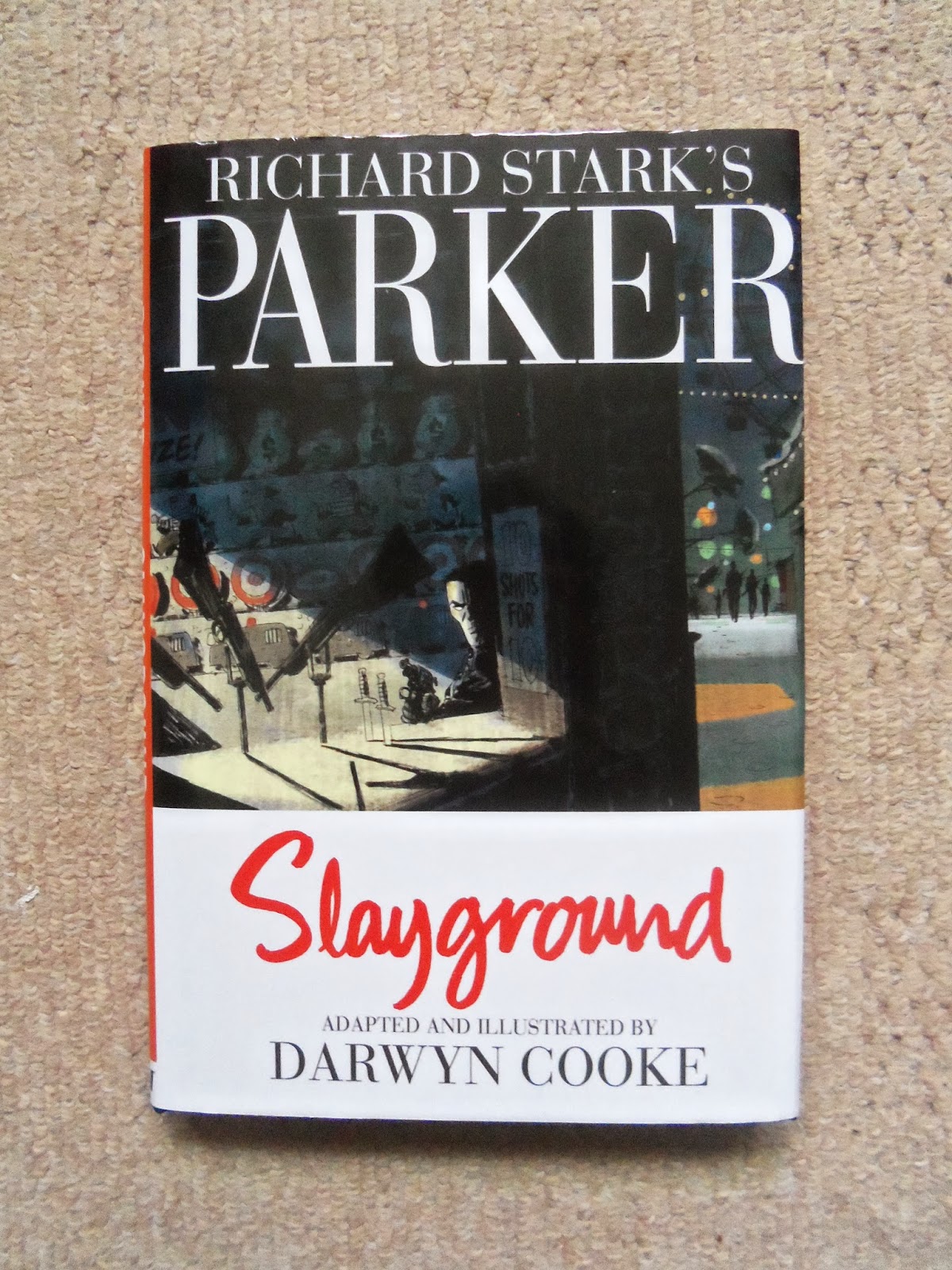 I'm not sure that Darwyn Cooke's Parker adaptations require further promotion as it seems everyone already knows and loves them, but the latest one, Slayground released last Wednesday (probably the last 'profile' release of 2013) and it's another winner. If you have never heard of Parker before, he is a character with a series of prose books written by Richard Stark (pseudonym of Donald Westlake), in the hard-boiled crime noir, Chandler tradition, the difference being that instead of being your world-weary-moral-line-toeing-but-essentially-good PI detective, Parker is a thief and crook, an anti-hero.

Cooke has been adapting these books into gorgeous, hardback, two-coloured comic volumes since 2009 with publishers IDW, with Slayground the fourth in the series (although each book stands alone). His ridiculously good-looking retro-cartoony leaning art is a suitably stylish foil to the square-jawed, sharp suited, cigars and alcohol vibe of the 60/70's era setting.  I'm a huge fan of crime noir- Raymond Chandler, Robert B Parker, Dashiell Hammett- so I guess I'm more ready to be pleased with what's on offer here, but to dismiss these as genre stories is folly; Cooke's cartooning and his source material have melded together to create something  classy and wonderfully good. Here, read this 8-page opening preview first (via Comics Alliance), and then I'll talk a little bit more about it (nothing spoliery, have no fear). 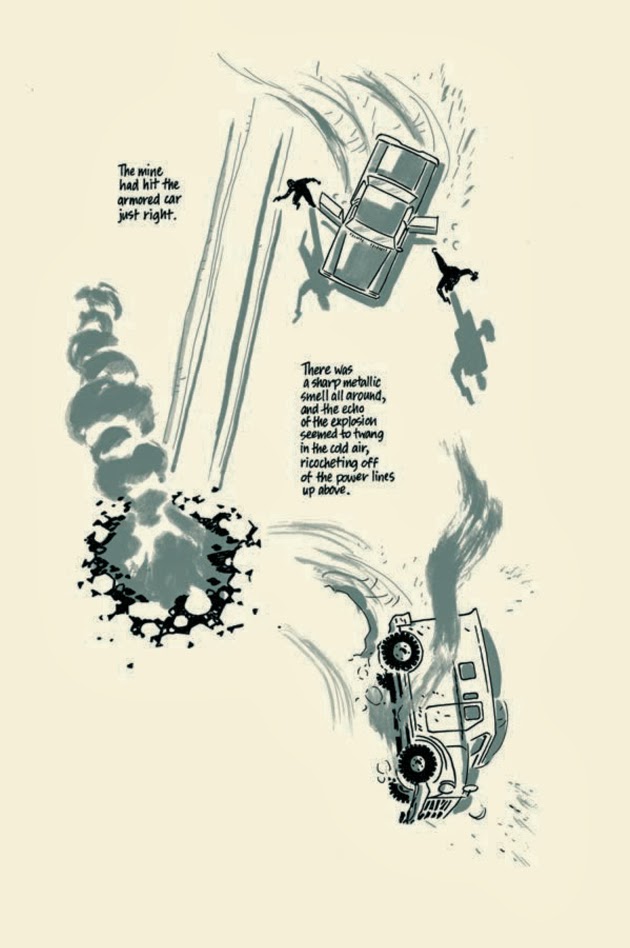 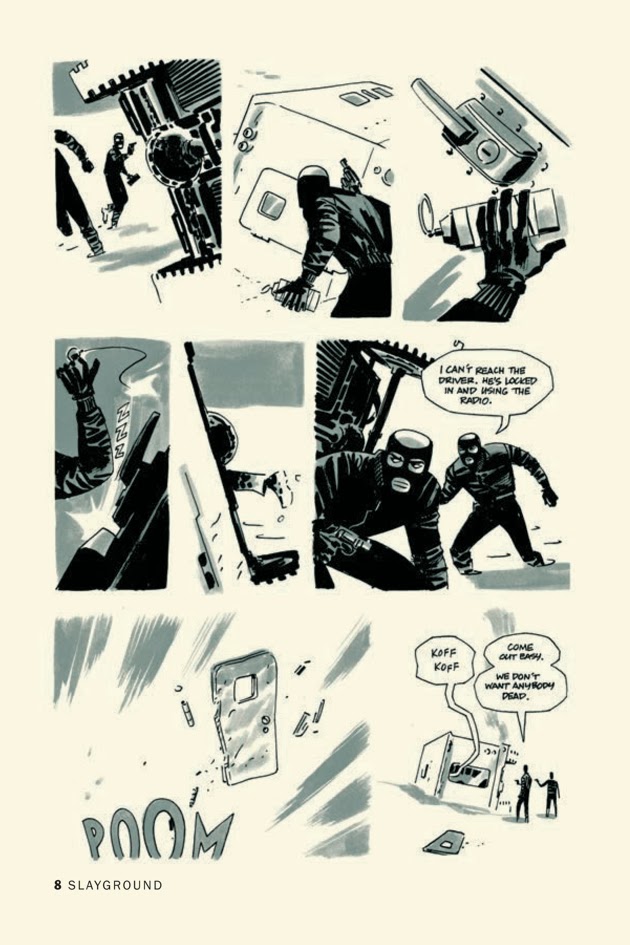 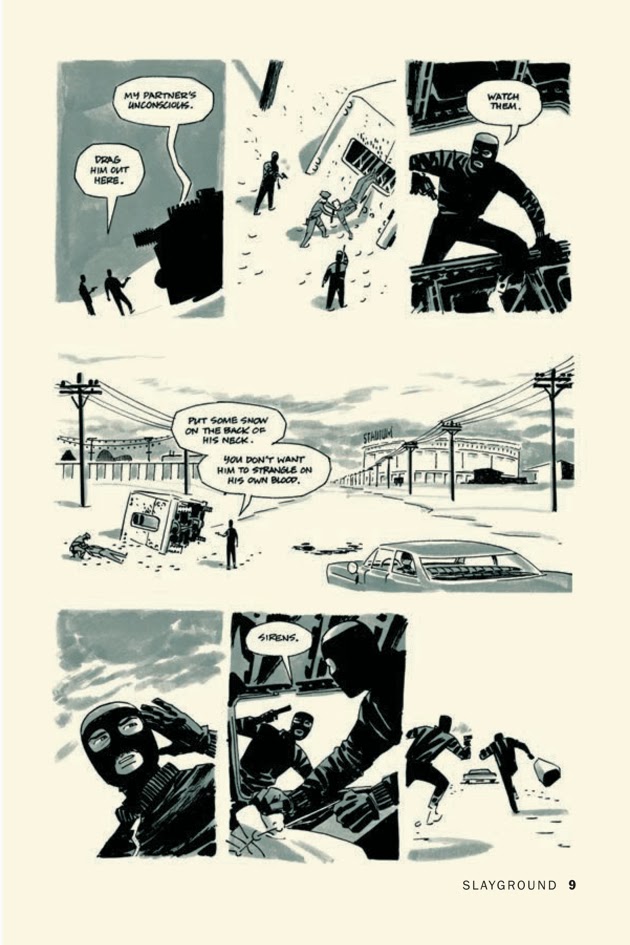 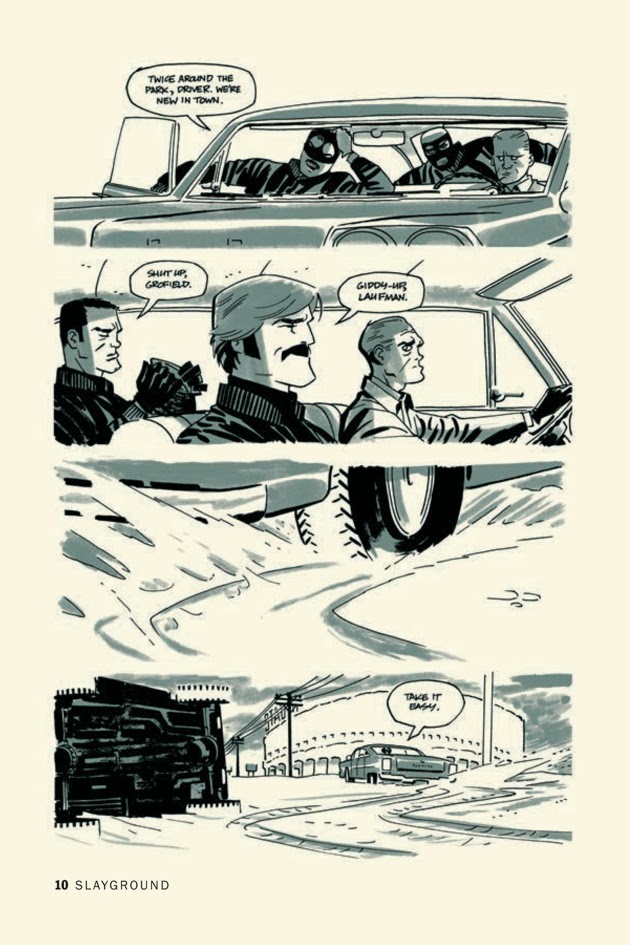 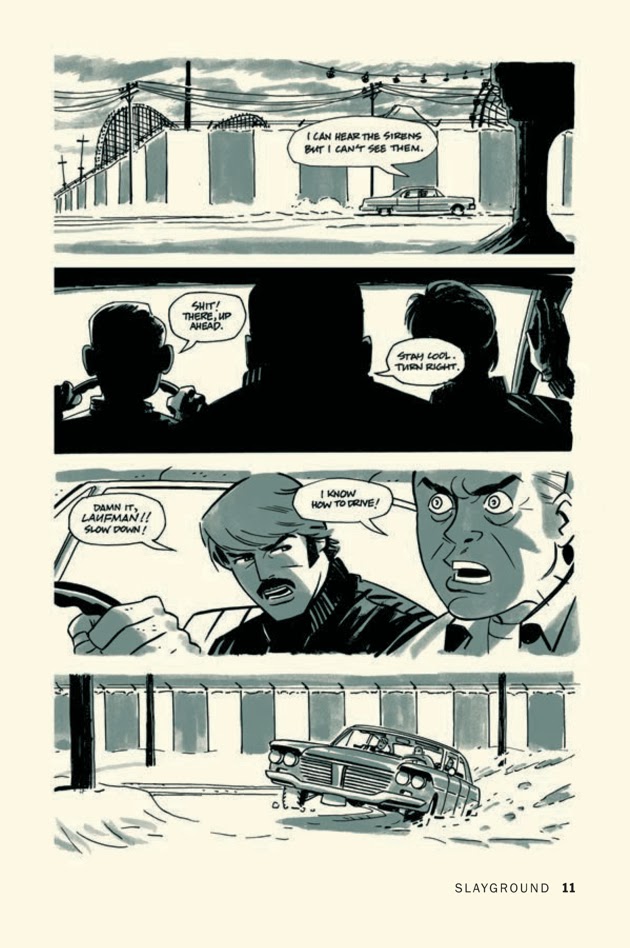 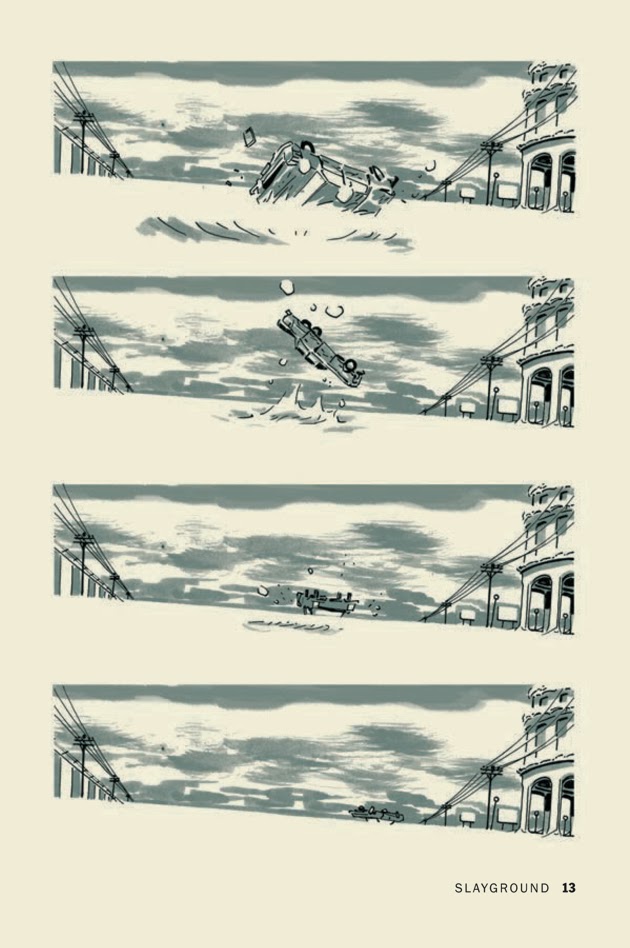 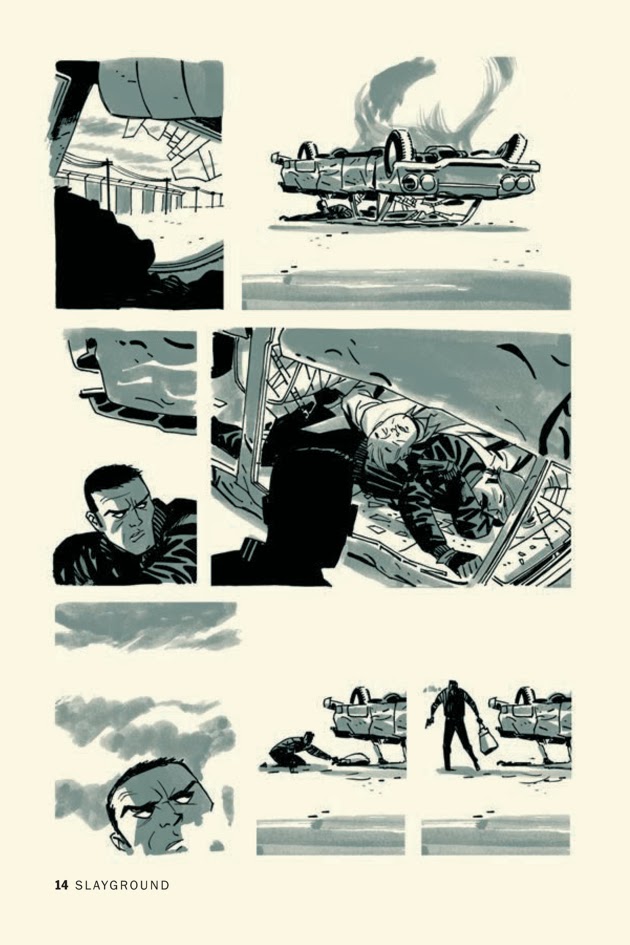 And that's where the story picks up from, with Parker wandering off alone in the snow after the getaway car crashes, looking for a place to hide- something close, as he can't get far on foot without being noticed. 'Something close' turns out to be a shut-down theme park, surrounded by high, wired walls and only one way in and out. The problem is, he's seen as he vaults the gates, and the people who are coming after him aren't the ones he's expecting...

After The Score, which I felt had a couple of discordant points and was a bit busy overall, Slayground is a super taught narrative, shorter, and featuring only Parker for much of the duration. The ingredients are streamlined, keeping things tense and focused, with long, silent stretches where Cooke goes to town with the conceit of the theme-park setting- beautifully illustrating space rides, a house of wax, a tiki-time theater, a fun-house, even including a pull-out map of 'Fun Island' detailing all the attractions and their respective locations.

It's a very, very, VERY good comic, which is followed by another Parker short story in orange and black and in similar, terse vein- Parker, Parker, Parker against the world, so of course you find yourself rooting for the criminal who finishes up on a construction rig half-way into the sky, laughing like a maniac. All in all, pretty spectacular- if you're a noir/crime fan in particular, one you can't miss. 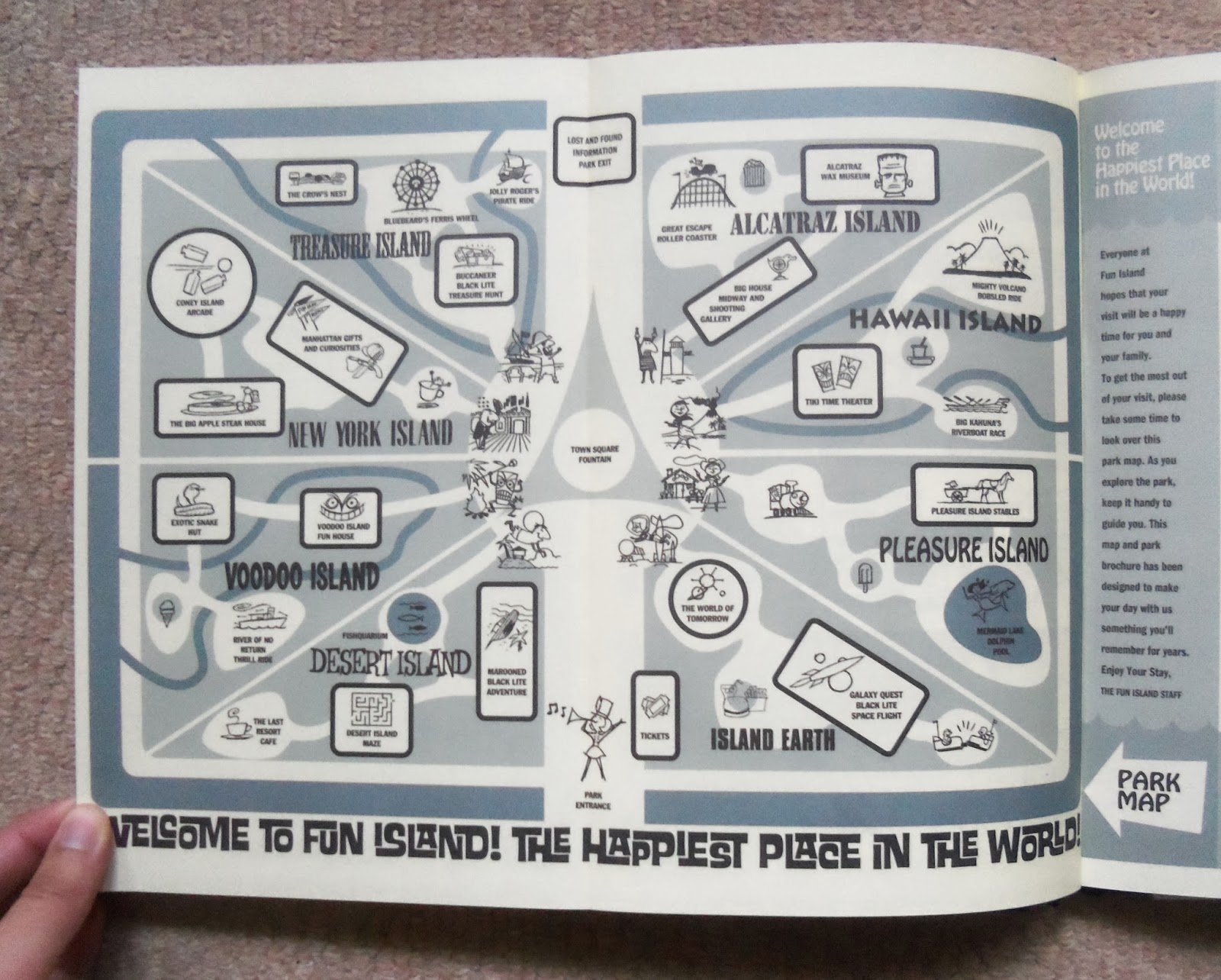