Comics Carousel: of women and vantage

Reviews! Or something approaching them... As ever, click on pictures to enbiggen, and click on bolded titles to lead you to places where you can buy said publications. Also, I would just like to point out this week, that The Good Wife aside, all the other comics are only £4 or under, and all are worth every penny and more. 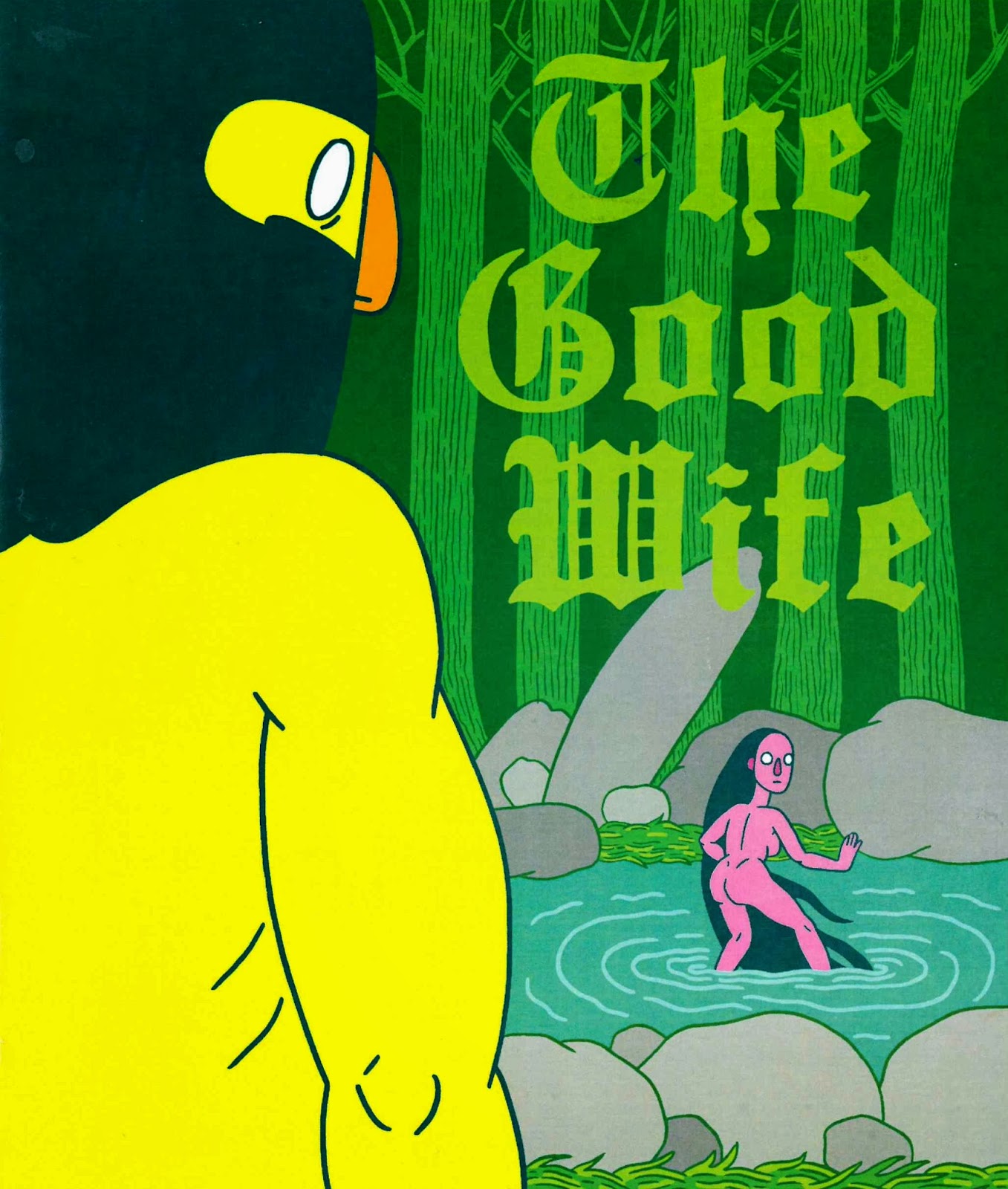 The Good Wife by Sophie Goldstein: Goldstein published The Good Wife in late 2012, after 2 printers rejected it due to its (I'm guessing) nude and sexual content. It was subsequently selected as one of the entrants for the Best American Comics 2013 anthology and it's easy to see why: it has a quiet unwavering power, with both obvious and more obscure inferences. It begins as a simple parable: a naked man, caveman-like, lives in the woods and one day chances upon a woman bathing. They have sex and return to the man's wooden cabin to live together. He goes out to gather wood and hunt in the harsh cold weather while she remains home. The man grows increasingly weary and so, one by one, the wife removes here limbs and offers them to him to attach to his person, so that he is able to do more. This continues to escalate uncomfortably, until all the woman's limbs have been removed, and only her torso remains. There is an immensely creepy few panels when this 2 headed- multi-limbed creature returns after a day's work, shadowed in the doorway, ready to have sex with a prone torso lying on the bed.

However, before any conclusions are made, it's important to note the small nuances: the first character we're introduced to is actually the woman- joyfully jumping off some rocks into a pool. When they have sex for the first time, it is she who is on top. It is she who offers her strength to him, and her expression when he pops her arms out of her sockets is difficult to read: pain or shock at his literal interpretation of the taking? Ultimately, she ends up in the position of both having sex with herself and watching her husband have sex with her. Goldstein is clearly exploring and playing with stereotypical roles- taking 'the good wife,' tradionally viewed as a woman whose life revolves around her husband, his needs and desires, and then muddying, subverting, and even appropriating those waters.

There's little speech here, apart from the staccato repetition of 'wife' and 'husband' from either character, which further reinforces Goldstein's themes. I'm a big fan of Goldstein's work and have read a few of her comics- Mothership Blues, Ice, House of Women, Betsy, and this is the first time I've seen her use colour and she does so remarkably well. The colours are purposefully a little over-saturated, a little too bright, emphasising the fleshy pinkness of the woman and the yellowy green of the man. The art here is also a departure from her usual looser, more cartoony style- stylised, contained, more intently shaped. It fits with the simple, in-the-beginning narrative that it's reflecting. The use of blank, white unblinking circles for eyes has an unnerving effect: one can't help but transplant the changing feelings you ascribe to each character as you read. For the woman they travel from happy, curious, kind, pleading, helpless, beseeching, controlled, voyueristic, but for the man, funnily enough they are automon--like, empty, never changing, never really seeing. From beginning to end, the woman, by courtesy of her emotions and journey is more: more human, more a person.

I think it's rare when all the elements in a comic (because there are a lot of them) come together as a cohesive, cogent whole that is a perfect slice of story, but that's exactly what Goldstein achieves here: from the idea, the execution, the art, the colouring, the lettering, the title, the allegory- masterfully showing, sometimes guiding. The Good Wife is a thoughtful. disturbing and yet somehow poignant comic, and one you should seek out. 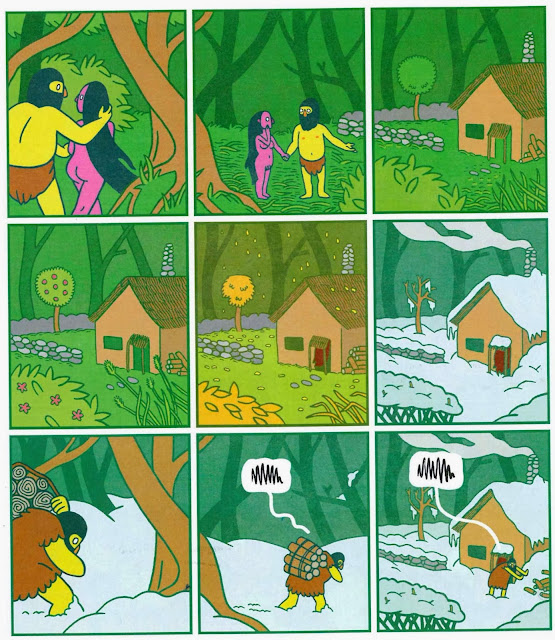 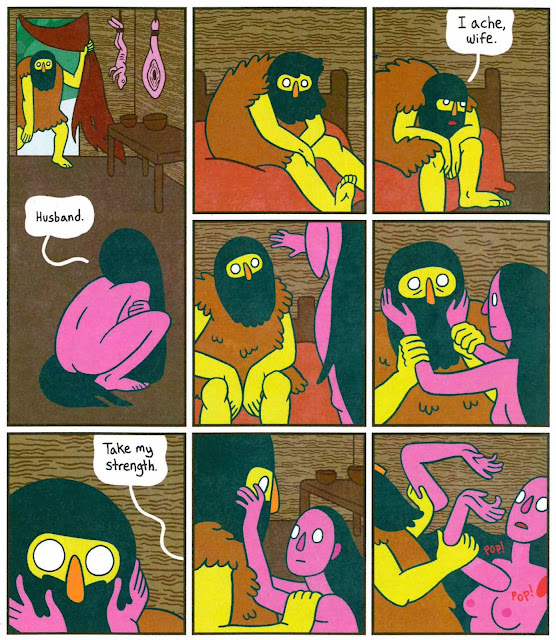 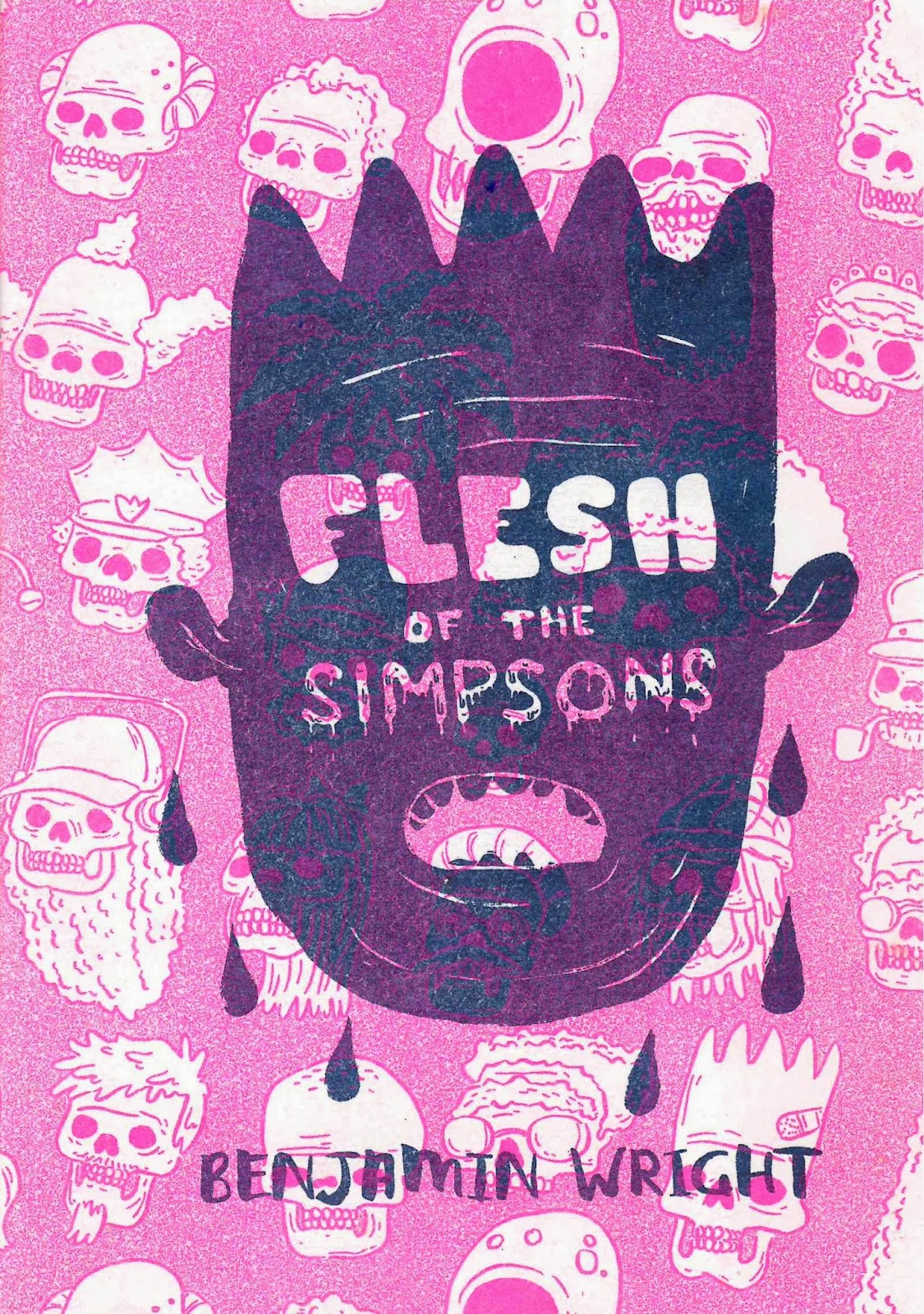 And thus the Simpsons' not-so-domestic scene the next morning, as an alcohol-craggy Homer cracks Bart thickly across the face with his fist, is interrupted by sirens and flashing lights outside; they watch as police struggle with Millhouse's naked, mouth-frothing dad as paramedics roll out gurneys of his dead family. Despite said ominous scene, Bart sees fit to pluck a video-game protruding from under the sheets one of the corpses, which he decides to take home, despite Millhouse's death-throe plea to destroy the cartridge. So Bart and Lisa begin playing the game- usually at night, and upstairs Homer finds himself getting hungrier and hungrier...

I have to admit I approach things that take huge culturally iconographic characters like The Simpsons as their point of entry with a lot of caution. A lot of it is, um, not very good, often with ideas being very thin on ground or the conceit applied generally not clever or funny. There's also the difficulty of deep , fixed association- viewing those characters in a certain way and attempting to later or play off that connection.  Wright strikes an easy balance here:  he could easily have made this book with original characters, but having The Simpsons as readily recoginsable figures allows the reader to faster enmesh with the tale and is more enjoyable for it. He strips away a layer of cartoonish veneer, adding some slight, more 'real' facets- the stark, ugly-ish rendering of the family, Homer punching Bart hard across the face- nothing startling or that hasn't been inferred before, but enough to keep things interesting and in line with a more visceral tone.

The pace is kept nice and tight: one of the aspects done particularly well is the ratcheting of tension as you switch between game scenes and life scenes with the two moving slowly ever closer. The options of choosing your game avatar are a cute, humorous touch, and the final page with Itchy and Scratchy is a fantastic closer. It's generally a very good-looking book- Wright has a lovely style; simultaneously aesthetically pleasing yet meaty somehow, and he's got a nice handle on rendering the pixelisation of the game interface. The comics itself comes with 2 cover options (which you can see here), both of which are pretty great. If you like The Simpsons or gaming or horror, chances are you'll also like this comic. A lot. 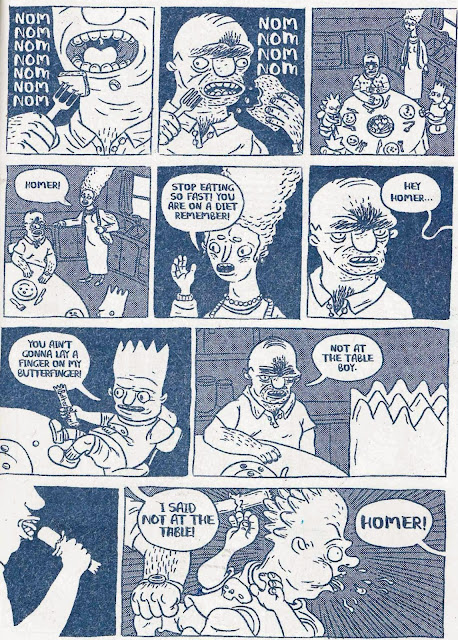 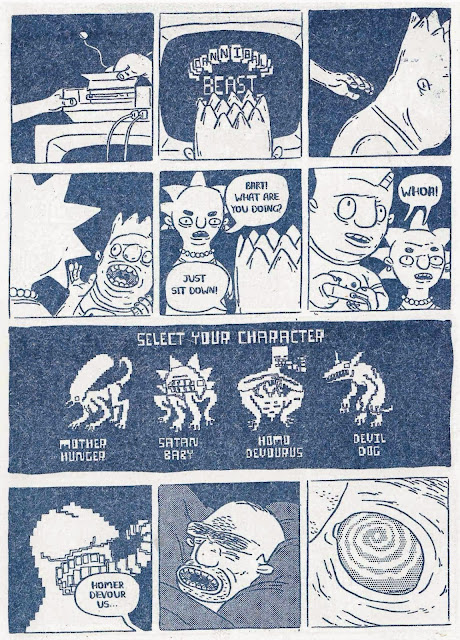 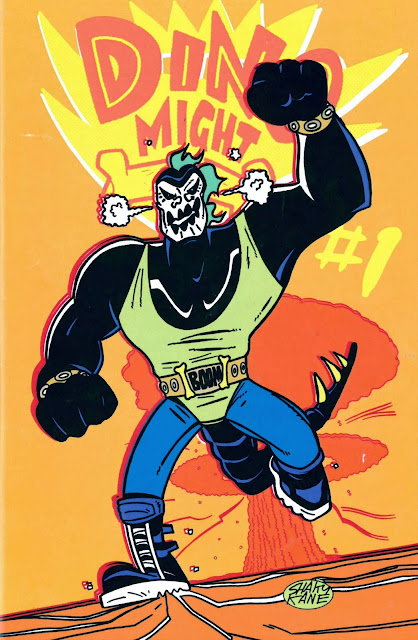 Dino Might by Richard J Smith: Dino Might was one of the books I missed at Thought Bubble, but luckily working for a comic store has many advantages, and Jared bought some copies to sell. By now you will know the reason I picked this up: it has a dinosaur on the cover. How about that ace Shaky Kane cover, by the way? So yeah, dinosaurs are a weak spot, but honestly I was really surprised by this book. I wasn't expecting much- the Shaky Kane cover and low price point made me want to check it out, but I enjoyed it so much.

It has a central premise of a wrestling/boxing/fighting dinosaur, and reminded me very much in tone of the Killer Croc story in Batman Adventures where Croc is doing the same thing: making a clean living fighting underground. And that's no bad thing at all- those comics are superb.It's silly and fun, but it has enough emotion to make you care. You get the feeling Dino could take or leave the ring, were it not for his weasel of a manger constantly getting in above his head and parlaying Dino's abilities as payment. A Shaky Kane cover is something to live up to, but Smith more than manages to do justice to his interiors- his cartooning is lively, dynamic and characterful and the colour plaette gorgeous. I mentioned it's funny, and it's actually very funny- Dino, of course plays the straight man, not saying much, but there's a brilliant moment towards the middle where he receives a humongous punch to the face and the comic goes into black and white for a couple of pages- lovely bit of visual humour and nicely done.

Another thing I really liked is the character design of Dino: he appears to be a T-Rex but with the arms of the Rock. His hide is to be black and white with green spiky plates running down his head and neck, while the white markings give him a skeleton-death-head look- while the overall effect is very cool, you can see why an opponent wouldn't want to face that. Dino's also a bit of a fashion conscious dude: fond of vests - and with those guns, who wouldn't be?- but also partaking in a interesting line of jeans and boot/trainers combinations.

There's an additional 'bonus round' with 2 more 2-colour stories, the second of which sees Dino reminiscing about his mentor in  mildly hilarious context, made funnier with Dino's unchanging, expressionless face book-ending the memory while manager Austin babbles away. A really fun comic, of which I'd happily read more, and nice to see this sort of perfect, all-ages fare being self published in colour-  and printed on thick glossy cardboard stock too, so sturdy and good quality. 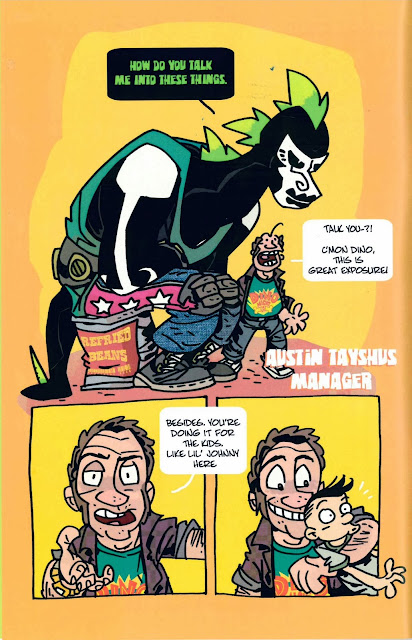 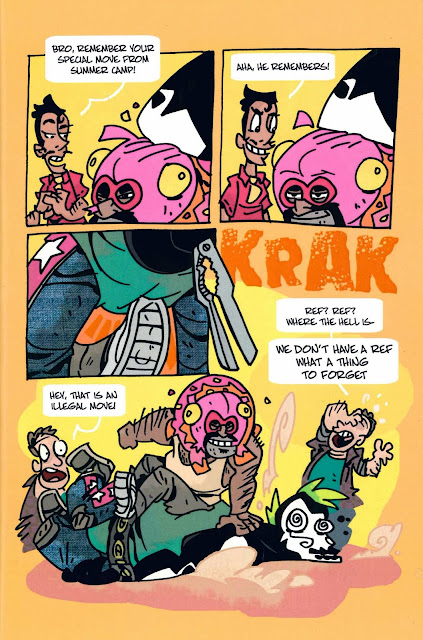 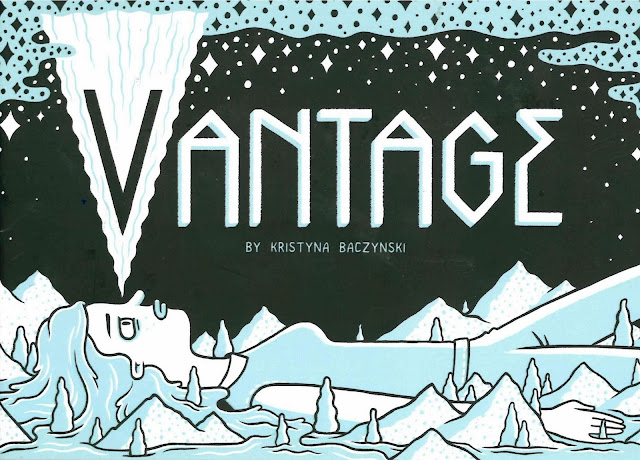 Vantage by Kristyna Baczynski: Here's another Thought Bubble purchase. Vantage sees Baczynski ruminate on place and perception and the self. That sounds rather hoighty toighty, but Vantage isn't that. It's an engaging and swift journey, expansive and intimate, moving from person to object showing the different ways and points from which things are viewed, and the manner in which that alters thought. A bird soars high in the sky and comes to rest at a window ledge looking in. Inside a young woman has just woken up and opens her coffee jar to examine the few remaining beans. Her large eyeball looks in, the beans cower and huddle together and look back out at her. The woman's eyeballs have a chat with one another, her eye waters in the cold, and the tears have a race down her face.

Baczynski does gorgeous illustration and design work, and Vantage is no exception, with carefully considered panel layouts and intricate patterned covers, but I've previously felt her comics have a bit of an emotional disconnect.Vantage sees an improvement in that respect, it has a softer feel, more human, with the art servicing the narrative, rather than perhaps the other way around.Her art also seems a little more pared back here, which probably contributes to that effect.

Vantage is ostensibly about your place in the world, the ways in which we are both big and small: it depends (excuse me) on your vantage point. Sometimes when we feel small, we need to be reminded we're part of something bigger, or sometimes when things feel huge, it's helpful to put them into perspective. Of course sometimes that's not helpful at all. When Baczynski pans out beautifully in the end - first an aerial view of a city, then space, the inside of the human body and the outer, then further, there's a feeling of everything fitting together, which is essentially what we all are after in a way: a place in which to fit and belong. 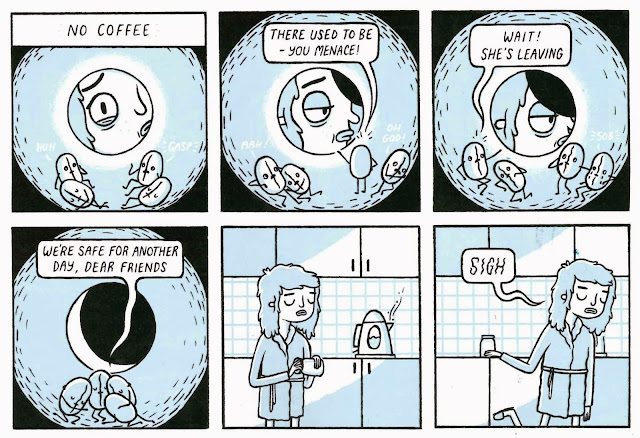 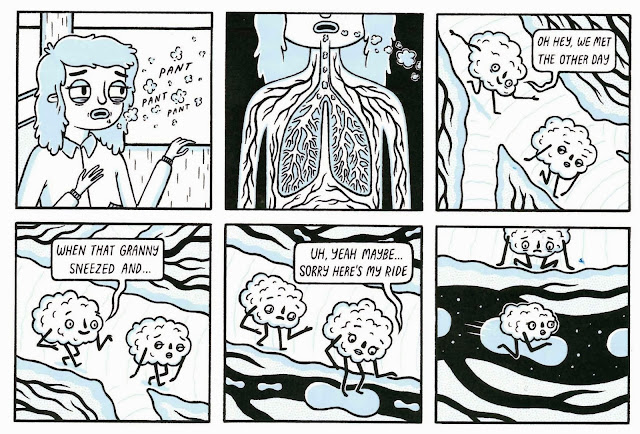