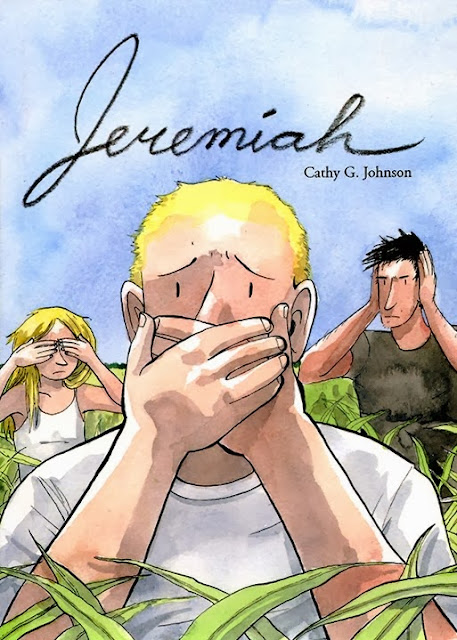 It's that other Wednesday which means, yes, it's Comics Sheflie time. For this second installment the  fab Cathy G Johnson has provided us with a doozy﻿ of a piece with lots of photos to pore over and a lengthy write up to compliment them. If you're unfamiliar with Johnson's work, may I direct you to her website (which you may want to bookmark), where her talent for powerfully illustrated narratives is showcased. There's a lot of material available to read there for free, in particular her beautiful web-comic, Jeremiah, which sees the titular character navigate questions about faith, adolescence and sexuality, and was collected and published in print last year.

And now it's shelfie time: 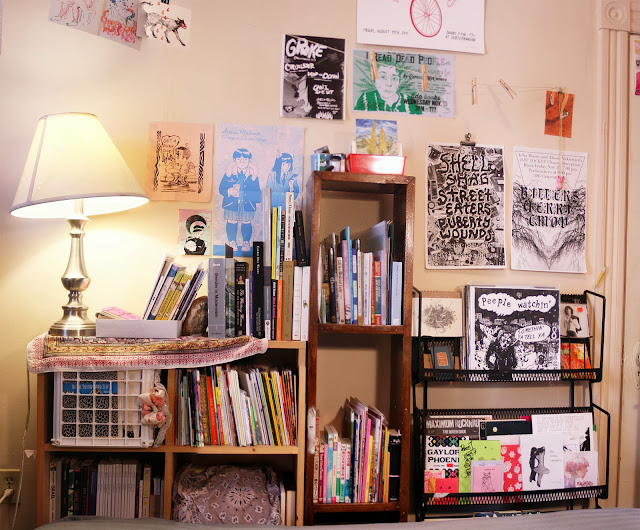 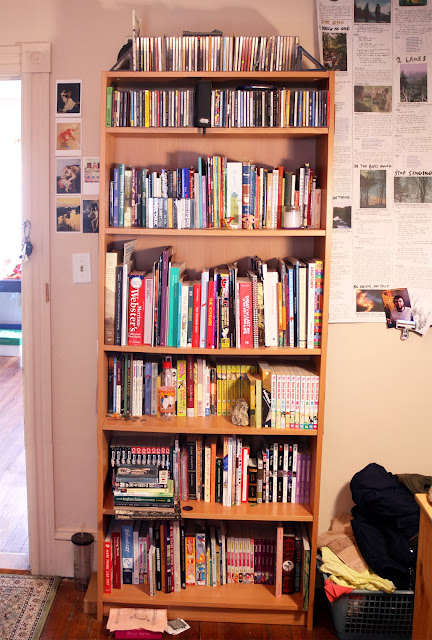 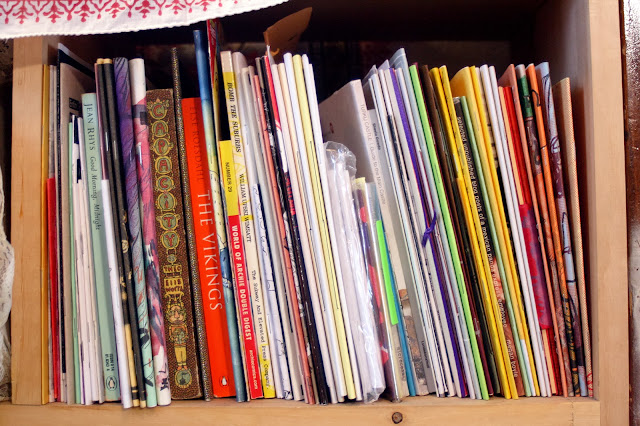 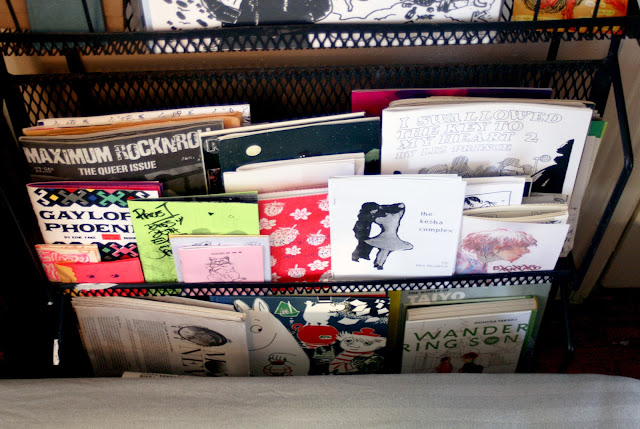 'The way I have my books shelved is chaotic. I’ve moved a lot, and by the time I got into the house I’m currently in, I was so tired I just shoveled books out of the boxes and into whatever crevice they fit. This means comics and theory and philosophy and poetry and art books and fiction are all bunged up against each other. However, I’ve been in this house a whole year now, so that excuse is flimsy. Now my excuse is that I’ve visually associated spines too much, and re-organization would mean utter confusion and I would never find anything again.

But I think that’s how comics should be! They should be next to poetry and novels and other books with and without pictures. I think partitioning books into whatever type we imagine them to be is stuffy, and juxtaposing them into interesting thought and idea categories is much more entertaining. That’s my story and I’m sticking to it.

So I live in the tiniest room imaginable, so my tiny tiny bed is shoved up next to my collection. I inherited this menagerie of shelves from other people, and the metal magazine rack is a treasure. I rotate what I display on it, because I like to look at the covers of things, especially since zines are so important, but hold no visual weight on shelves. To the left, all those zine spines in a neat row is a total set-up. Normally they are lying in a just-read heap. On the wooden shelves and below my mattress are milk crates full of more zines. I also have a normal bookshelf (that’s falling apart) that has most of my graphic novels on it, as well as the few long manga-collections I kept over from when I was a kid. In addition to these most furniture top surfaces have books on them, too.

I try to have complete comics collections for my friends, which is a no-brainer. Being friends with creative people and supporting them is so, so important. The other really over-arching thing is I favor women and queer authors. Although maybe it isn’t super obvious in these photos; men tend to get gigantic spines, kinda suspicious, huh? But I can tell you here and now the vast majority of my comics are by not-men. If someone tried to put a Daniel C. or Chester B. comic on my shelf I would laugh them out the door. 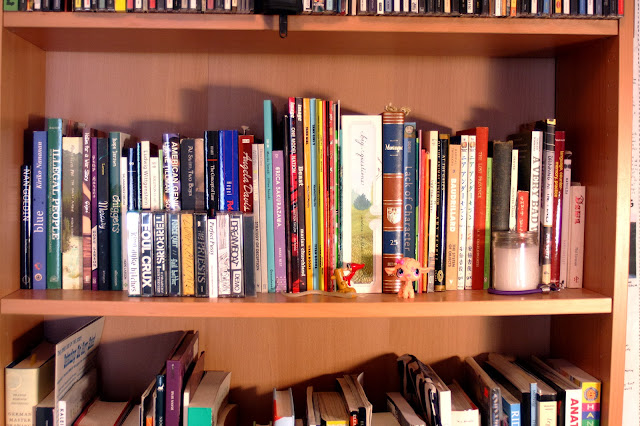 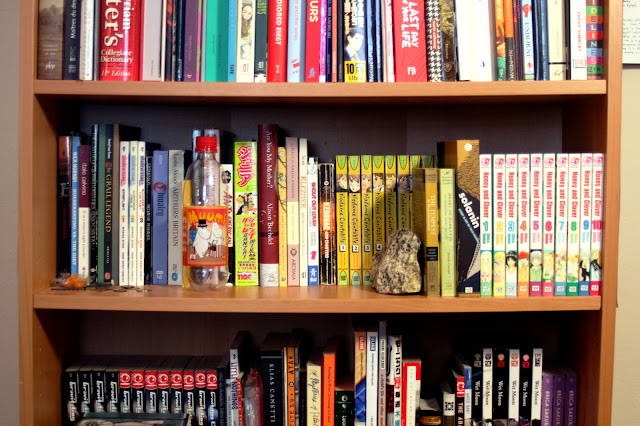 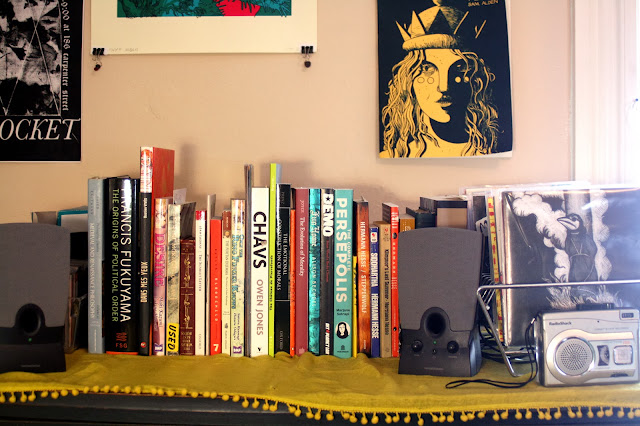 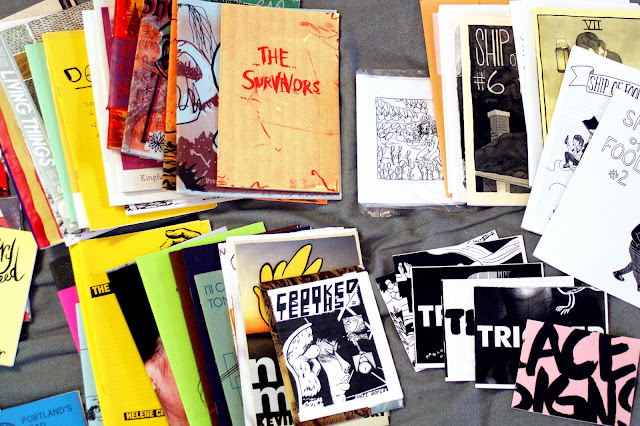 The part of my collection that’s manga is mostly “boy’s love” or “yaoi” comics, romance comics centered around two men. I was really into it as a teenager, and I got rid of piles of it before I moved to Providence, but I still ended up with a box that was too precious to let go of. Some of it is pornographic, so there is that quality that anyone going through puberty would be interested in, but I was also a queer kid trying to figure things out, so it was good to read about high school students discovering their confusing not-straight identities. I remember trying to find stuff about gay girls, but generally they were really sad. The boys got to have more fun. I think that experience has inspired me to make queer comics that aren’t only about boys; hopefully I’ll fill a void for other kids that are looking for their experiences reflected in comics.

I also have a decent amount of comics in languages other than English: Japanese and French mainly. That’s the best part about the language of comics, is you can read and experience work without having to know the words.

The collection I’ve built up as an adult are mostly self-published zines and comics, because that’s what I’m interested in. I spend most of my time in the punk DIY world. I like radical politics and unrestrained self-expression, especially stuff that gives a voice to people who are usually excluded from the mainstream. I go to comic stores rarely and generally still only buy self-published or small-press works; most of my collection comes directly from its creator, either at comic shows or the internet. I’m not interested in books that fall into the social power status quo. 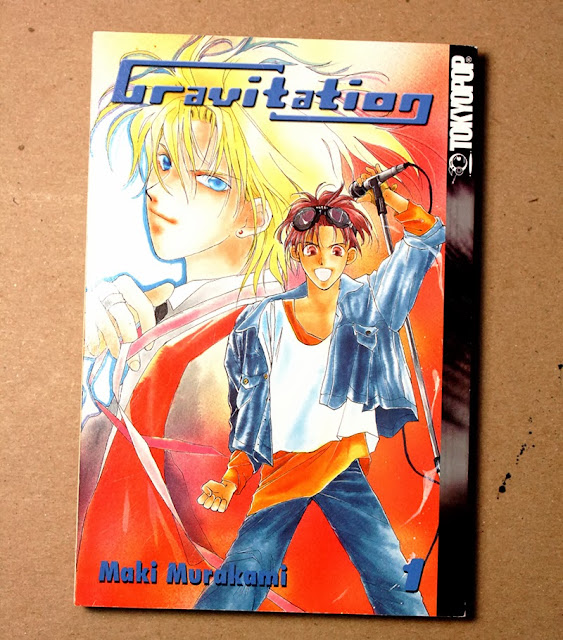 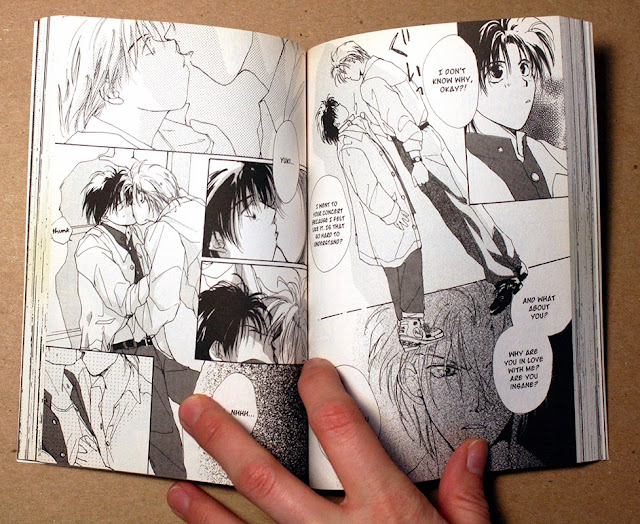 Gravitation #1 by Maki Murakami
Since I talked about how important gay manga was to me growing up, I decided to throw in the first same-sex kiss I had ever seen in a comic (in all of life, possibly?). The printing date is August 2003 so I was 14. I wasn’t expecting it and it was THUNDEROUS. It blasted the doors off of everything I thought was true. I’ve been trying to capture that kind of surprise in my work ever since. “How can I make this comic like the time I saw my first gay kiss in the back of my parents’ van on the way home from the mall?” is a question I ask myself a lot. (The actual manga ‘Gravitation’ is very funny and sweet, but generally has badly unequal power dynamics in the relationship, which is a trope a lot of gay manga tends to have.) 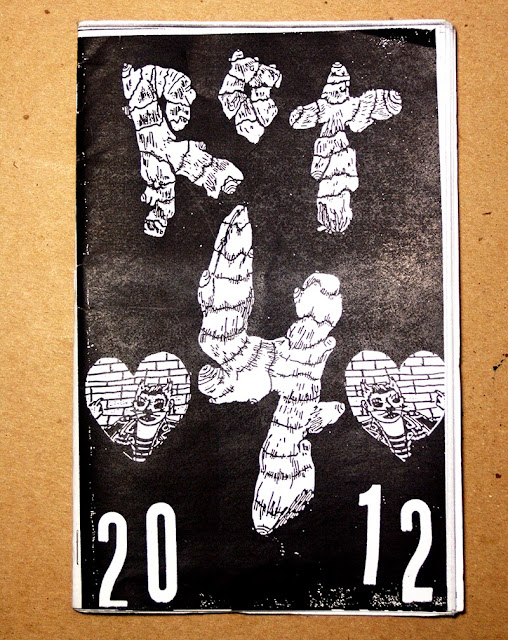 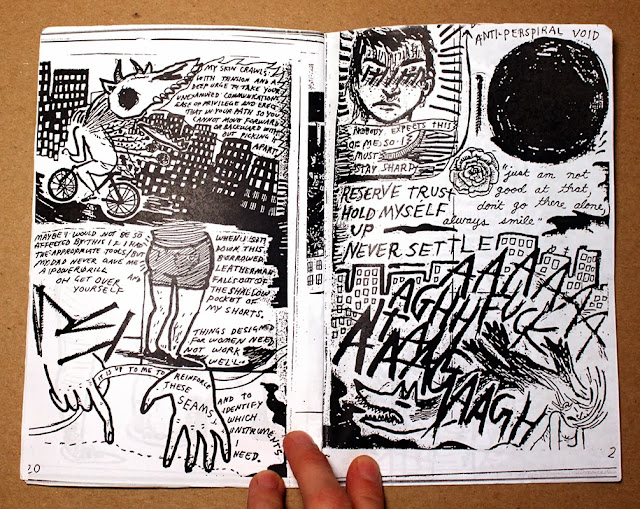 Rot #4 by Katrina Clark
Katrina is a fellow Providence artist and friend, and makes brilliant comic-zines that talk about queer identity and power, fun stuff and serious stuff. Rot is their on-going title. The zine evolves and grows with them, and the way they talk about personal and political experiences is brilliant. I love anything journalistic, anything where a person documents their life and analyzes it. This type of documentation of lives in the counter-culture is desperately important if we want the mainstream existence as it is to fall apart. Katrina does it with intelligence, skill and determination. 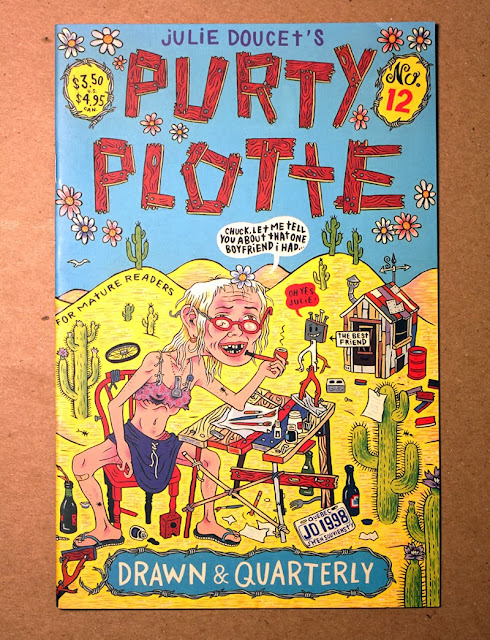 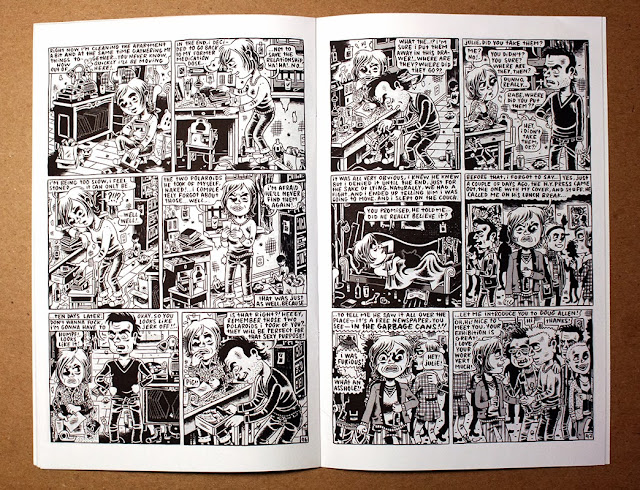 Purty Plotte (Dirty Plotte) #12 by Julie Doucet
If I didn’t include Julie Doucet I would be a downright crook. She is quintessential in the angry tormented journal comic genre. She’s a brilliant hero and a tremendous artist for not-giving-a-fuck and having a radical outlook. There’s a lot of folklore about Doucet I don’t know too much about, but I got the pleasure of sweating my pits through when I met her in Montreal this last year at Expozine. She’s important in the history of badass comics that are anti-oppression, and the giant I’m trying to stand on the shoulders of.'

Many thanks to Cathy for participating. Remember to stop by on the 31st for the next installment of Comics Shelfie.
Posted by Zainab at 00:34