In praise of: Boulet

Let me tell you what is significant about 2014 in terms of comics: this year will mark 10 years of Boulet's (real name Gilles Roussel) comics online. Like many others, I must admit to the arbitrary nature of keeping up with web-comics resulting in a haphazard reading of those I am interested in, but over the last 12 months in particular, Boulet's work has shown more innovation, imagination, range and technique than some do in an entire career (and I offer that statement minus hyperbole), that  a daily vigilance has been imperative.

Most web-comics seem to fall into two categories: the daily stand alone short strip, pithy, often humorous, e.g. Cyanide and Happiness, or the ongoing narrative offered in parts, e.g. John Allison's Bad Machinery. Neither really explore or push the limits of the web-comic platform specifically, in that these comics could easily translate into print- there is little that is tailored to the web reading experience. And this is where Boulet stands largely alone: he seems to have an innate understanding of the online platform, taking an ingenious multi-media, mixed materials approach to produce comics that are unrivalled in breadth and scope. Take for example, New York Again. It's a diary/travelogue comic where Boulet visits the Big Apple. Etched in his usual black and white and infused with his trademark humour, it narrates aspects of his journey, laid out in traditional 3-panel strips. He breaks out of these to offer some observational portraiture of New Yorkers that have caught his eye. More strips and then we get this:

He cuts through the ambling of his narration by the sudden incorporation of a huge gif, thrusting the reader into a unexpected, hyper-coloured sensory experience- a gif that actively demonstrates how he felt visiting this night-club- the assault of noises and people and visuals, the strobing lights, with an overwhelmed and dazed Boulet rotating in confusion like a disco ball. It conveys the atmosphere, warmth and oppression of the room in an instant, through movement and colour. Gifs in comics aren't new, of course- Zac Gorman uses them in his Magical Game Time strips to similar effect: animating aspects that build atmosphere: a crackling, glowing fire, curtain blowing eerily- elements that aren't integral to the working of the comic as such, and that translate easily into print. But in doing so the comic loses much of what made it special in the first place: imagine the above sequence sat static on the page; striped of vitality and essence, and greatly muted.

Take Our Toyota Was Fantastic. It's a fairly short comic in which Boulet reminisces about childhood trips taken in the family's Toyota, the feeling of safety and warmth that they induced. A young Boulet lays inside the car on a night-time journey, the orange glow of the streetlights washing over him as they pass through a tunnel. The shadowy outline of trees, the moon, a neon 'Esso' sign reflected on the window, all work to evoke the thrum and movement of the car. It's a beautifully resonant comic, anchored by the final panel of an older 'present' Boulet in a taxi leaning contently against the window, as off-panel someone wonders 'I wonder why you always insist to take a taxi... The subway is far less expensive.' Boulet is a superb comics maker, but that narrative, the emotions it expresses and relays, is absolutely reliant on those interactive facets.

Let's look at another of Boulet's 'banner' comics from last year: The Long Journey. The Long Journey showcases, for me, Boulet's mindset: what can web-comic do that print comics can't? How does the platform differ? How can that be used to create comics that are web-unique? The Long Journey, rendered in a pixellated old-school video game style, see the cartoon Boulet persona in endless free-fall, through strange and exotic lands, various weathers, down, down, down. The Long Journey hinges on the reader's use of the endless scroll, the movement mirroring Boulet's trajectory, with the reader following. There's no way it could work in print: the pages breaking up the endless one-ness of the fall, and the horizontal turning of the page at odds with the continuous 'down, down, down' feeling that's harboured in the original.

Boulet was one of the first purveyors of the online comic, so it's perhaps fitting that he's 5 steps ahead of what everyone else in web-comics is doing, but it would be nice to see the parameters of the platform tested more by others, too.Where people still seem unsure or even afraid to play around or test the web-comic platform, Boulet is having a ball- producing every kind of comic you could conceivably think of. His range of art style and techniques, and the manner in which he manipulates them to show a shift in tone or feeling, a movement from place or time, via colour or layout, is astounding. Here's a quick look at a few: 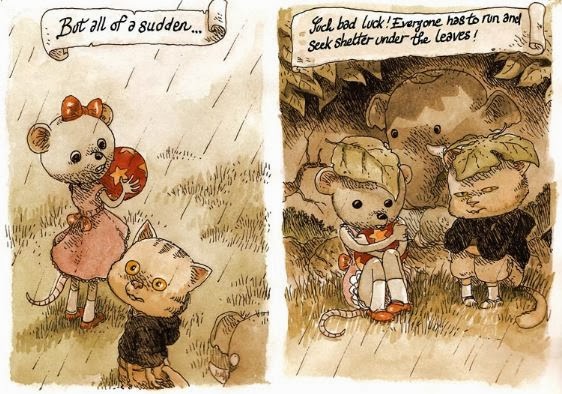 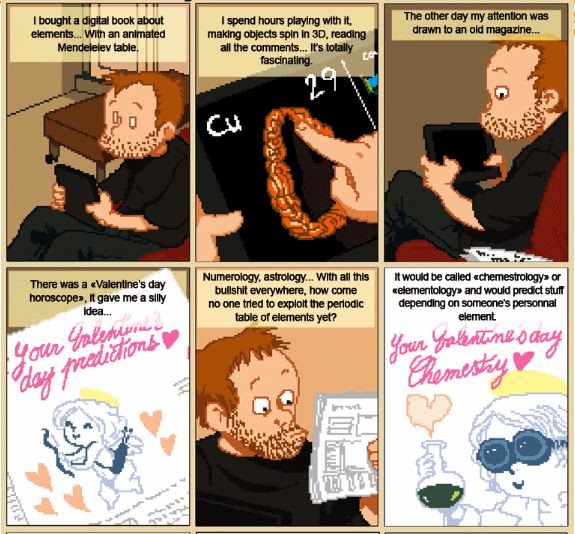 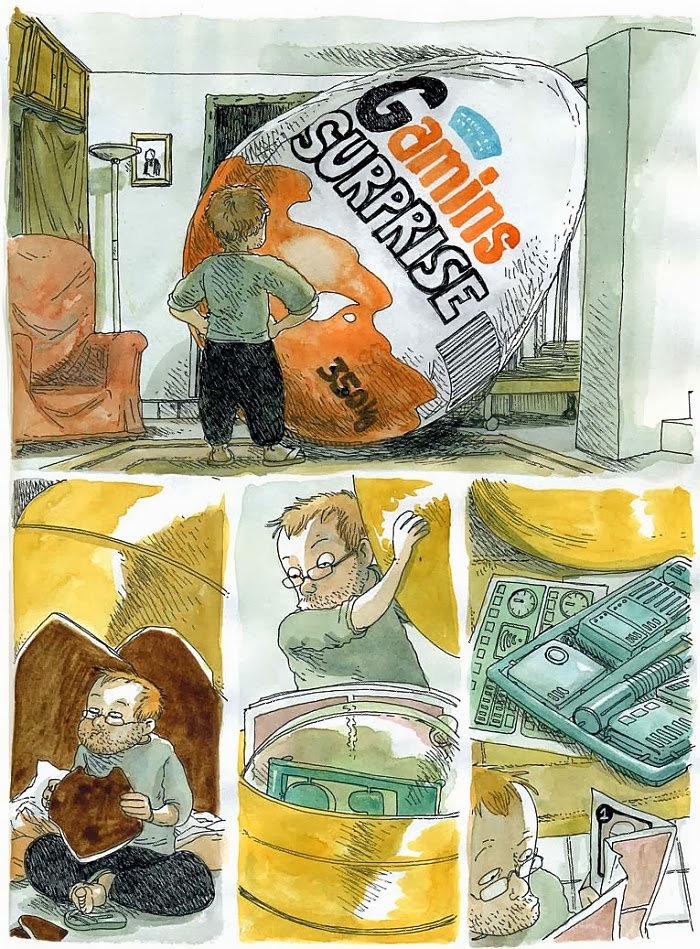 'Classic' Boulet- the black and white sketch style with his hair proudly orange (this is taken from a hilarious CSI spoof): 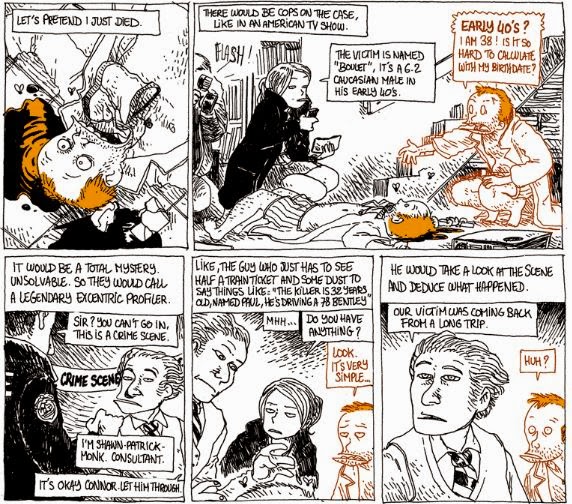 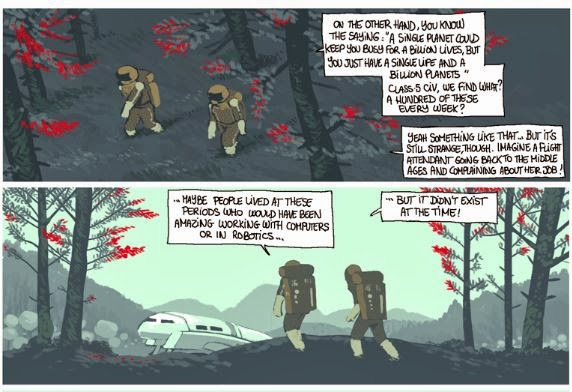 And there's a tonne more: photo-realism, as well as the incorporation of actual photos, videos, various painting styles, penciled art, digital, and on and on. The New York Pittsburgh diary alone has photograph, video, watercolour paintings, drawings, digital- seriously, just go look at it now. And it all works as one whole piece. Ostensibly, Boulet's comics are diary/autobiographical with a strong fictional slant, but over the years the man has written and illustrated every genre under the sun in longer and shorter length narratives: crime, sci-fi, fairy-tales,  an amazing pirate story that cuts between memory and imagination and past and future tenses, fantasy, time-travel, travelogues, wordless comics- he's done it all. Boulet's spoken of how for him 'the key is to always link the drawing to an emotion, a memory,' which is probably why most of the time, he'll insert himself into these scenarios, providing the reader and himself a point of recognition and familiarity- it's meaningful to him because he's in it, and it's meaningful to us because the Boulet person is essentially who we transpose ourselves onto. Joe Decie's comics are similar in nature: the quasi autobiographical thoughts a jump-off into the fantastical and imaginary.

The only other person who has come close to using the digital platform with a dexterity matching Boulet's is Emily Carroll; her horror comics require the reader to click on page elements to reveal plot facets and move the narrative further, giving them a choice to go on and making them a complicit participant.

Web-comics are getting more recognition, but it's a laborious process and the chase for attention and readers constant. Boulet, I would imagine, benefits from having built his base of readers over the years, and thus perhaps feels freer to experiment more, with his efforts paying off as his work gets wider attention. However, I don't think it's a stretch to say that on the whole, web-comics are still generally overlooked, under-appreciated and viewed as inferior to print- which would explain why he is yet to be recognised for his oeuvre. People talk about new ways of telling story, the evolution and progress of the medium, changing discourse and language, and Boulet is a perfect example of an innovator in the field. Let's, in this 10th year of Bouletcorp being online, celebrate and savour his mastery.