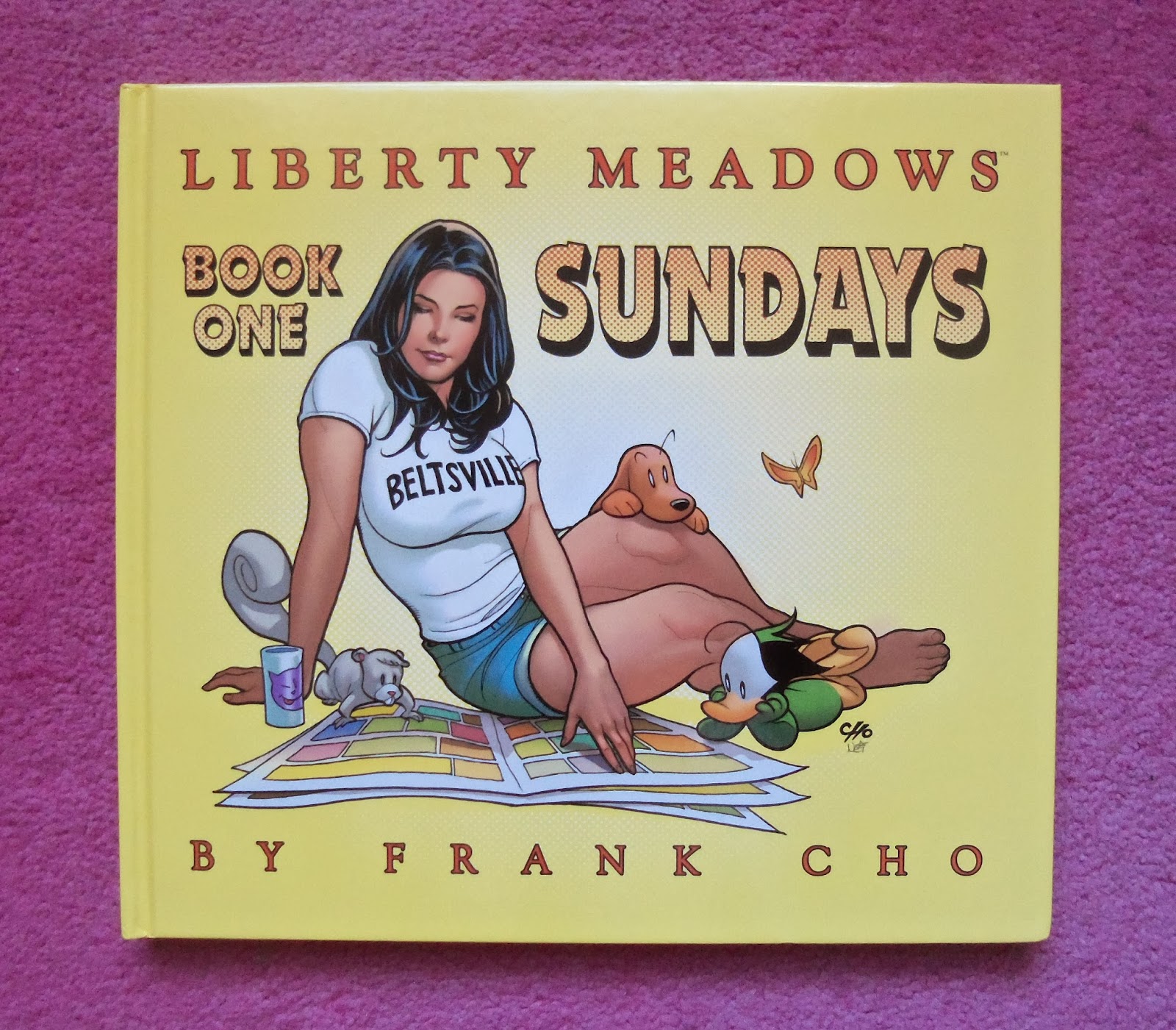 Do you ever read something and think its weird that I'm into this? I've always thought it a little odd that I enjoyed Liberty Meadows so much- I bought the first volume when I first started getting in to comics and was reading anything and everything (ironically, I'm much more narrow-minded with my choices now I've pinpointed what kind of material I'm likely to be interested in) and went on to buy the remaining 3 volumes. On paper, it reads like the sort of thing I'd avoid: Cho's newspaper strip (which he went on to produce in book format due to constant censorship) centers around an animal rehabilitation facility named Liberty Meadows run by the distracted Julius (focused on his war with nemesis Khan, the giant catfish), animal psychiatrist, the buxom Brandy and hapless vet Frank.

Of course all the animals can talk- you've got actual male chauvinist pig, ex-fraternity mascot Dean, in with addiction problems, Ralph, a squinty, midget circus bear, Leslie the hypochondriac bull-frog, and Truman the cutest, sweetest, most polite duck you ever clapped eyes on. Not to mention The Cow, whose name is just The Cow, mad with mad cow's disease and prone to kidnappings of celebrities amongst other such activities. It's the type of zany, off the cuff, crazy, taking-wild-turns-that-don't-really-make-sense  I stay away from, but for almost 3 books, it was absolutely hilarious and utterly brilliant in the best, most bonkers way. At that point, Cho got more indulgent and it began to get messy and lose itself in its craziness a little- as a portal to parallel world was opened and alternate versions of the characters broke through causing havoc. 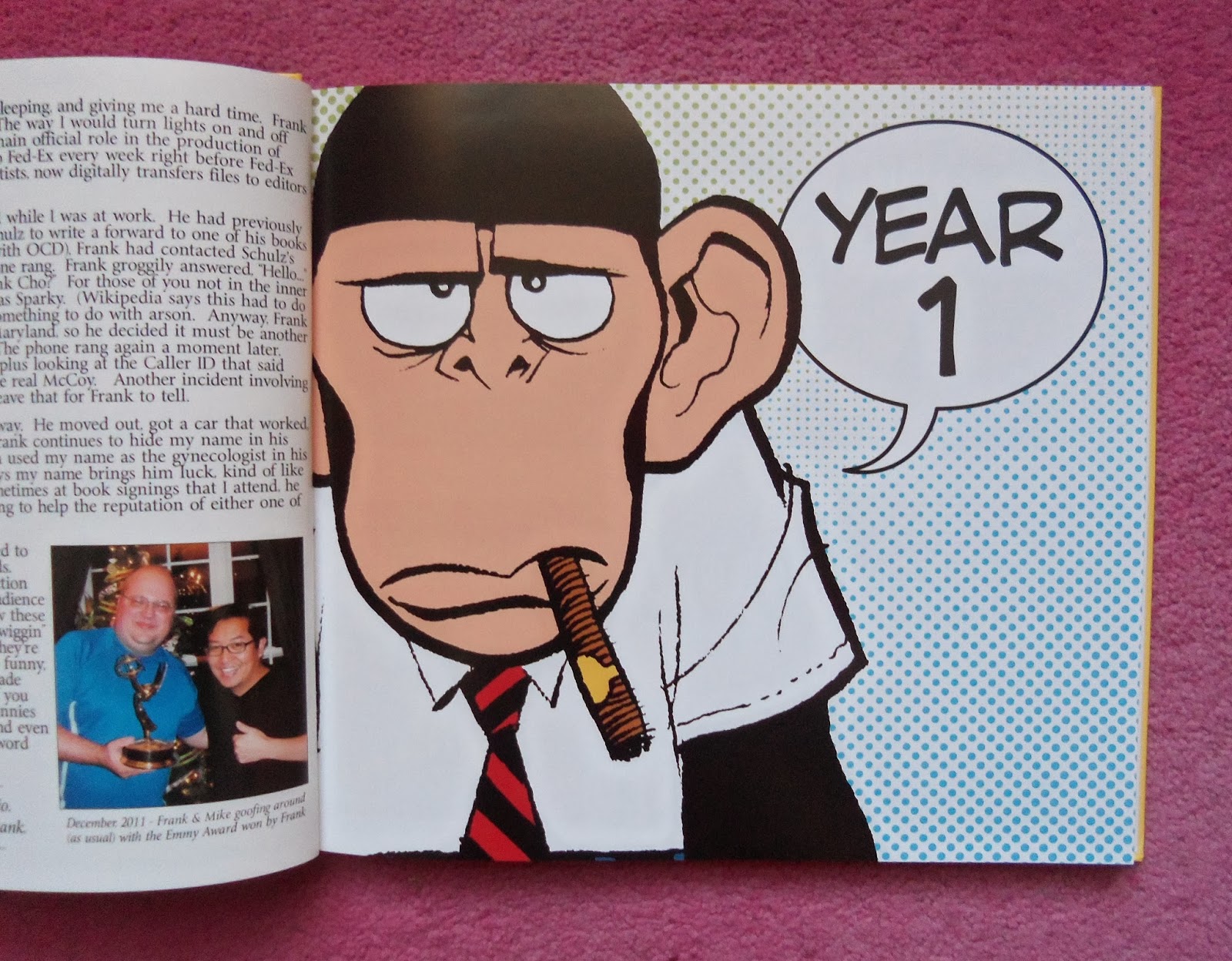 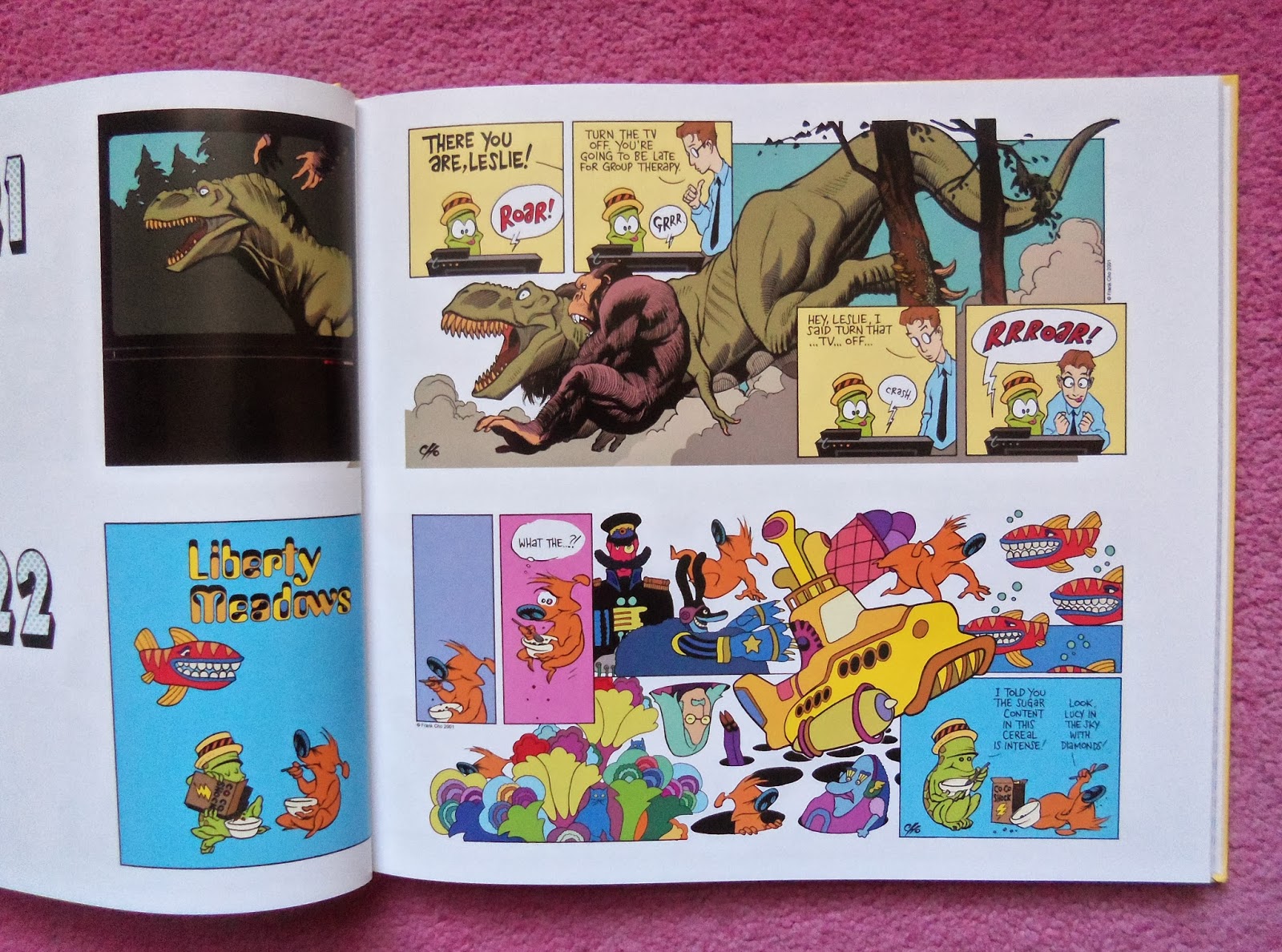 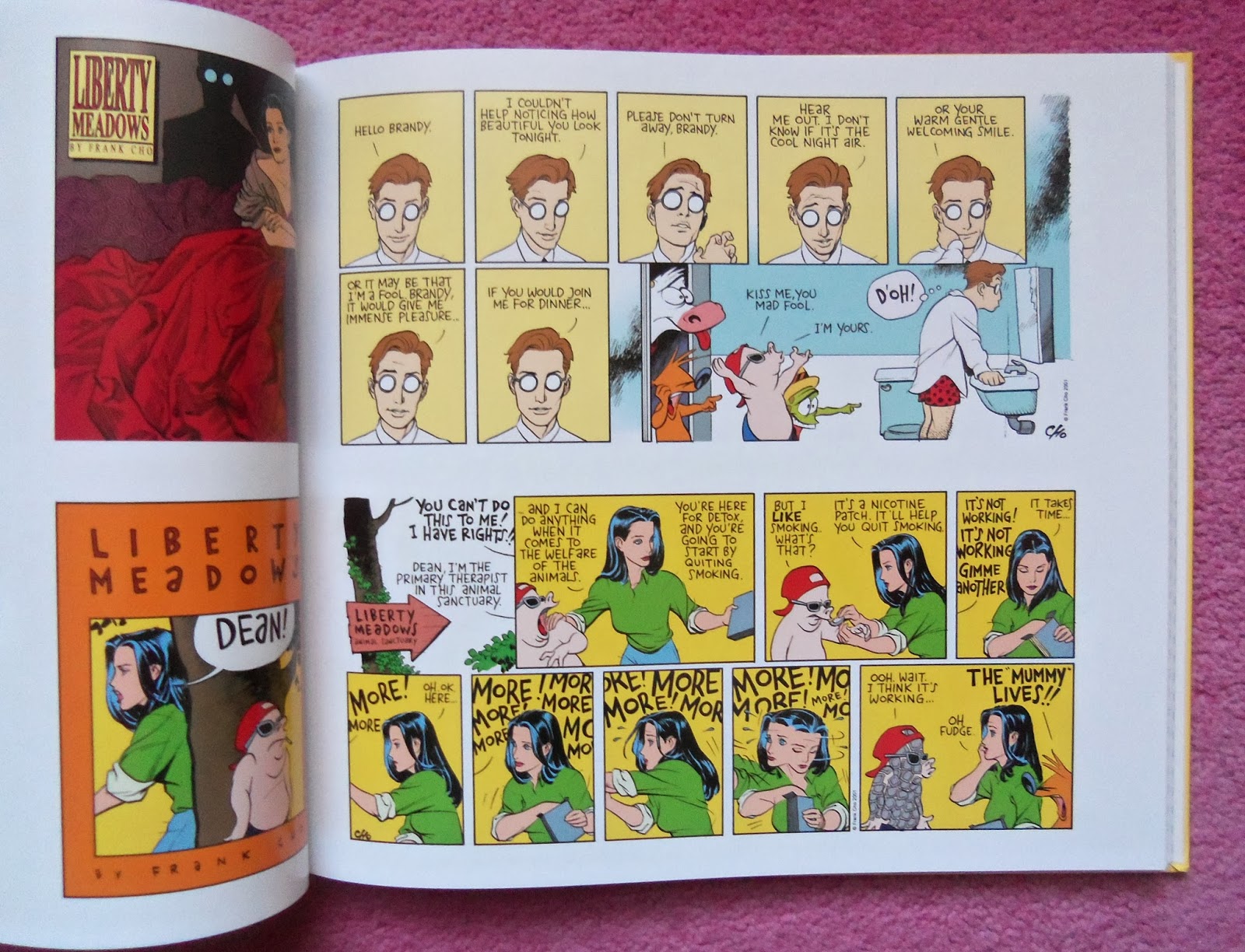 That drop-off was the reason I didn't buy this Sunday strip collection when it came out last July, but a physical copy on the shelves at work proved too much to resist (tip: never work in a comic store). Man, but I'd forgotten how good the early strips were- so very, very good. As a collection, it's a hardback, presented in landscape format compared to the portrait format of previous collections, the paper's nice and glossy, it's in full colour with strips divided by the year. I guess the pages on the left are a bit of a cop-out- there's nothing on them apart from the number of the strip and a preceding 'header' image, with all the strips laid out on the pages on the right.

But let's be honest- I didn't mind about that in the slightest. Cho's always played fast and loose with Meadows, deviating and going off on tangents, getting meta (you begin to understand the censorship!) and the Sunday strips are essentially a showcase of him doing that to the nth. So when you couple his undoubted drawing chops with that on-form free reign this is what you get: lots of dinosaurs and kong-sized gorillas (tv show within the strip called Mighty Shmoe Pong), a load of visual gags- characters winning races by jumping in to the panel below, meta fourth wall breaking as Cho addresses the audeince using his ape persona, beautiful black and white pencil drawings, Cho breaking out with some gorgeous horses again, homages to everything- Tarzan, Prince Valiant, Calvin and Hobbes, Michelangelo, Cathy, Peanuts. And a lot of The Cow: 'William Shatner's trying to come outta my head! He's overacting inside my head! Oh, the pain! THE PAIN!' The Cow quietly and freakishly sculpting incredibly accomplished pietas and biblical scenes while Ralph and Leslie fashion a snowman, The Cow in a closing pin-up that has to be seen to be believed.

It's an amazing collection which reminded me why I loved Liberty Meadows and one that made me laugh out loud more than once (and that's incredibly rare, people write that books made them laugh out loud, but those people LIE). The humour's on point all the way through and I think it's a pretty accessible collection that's easy to dip into for those encountering the material for the first time. I'm gonna go re-read those previous volumes, but if you're looking for something new and different to read, you should give this a try. Do it for The Cow. 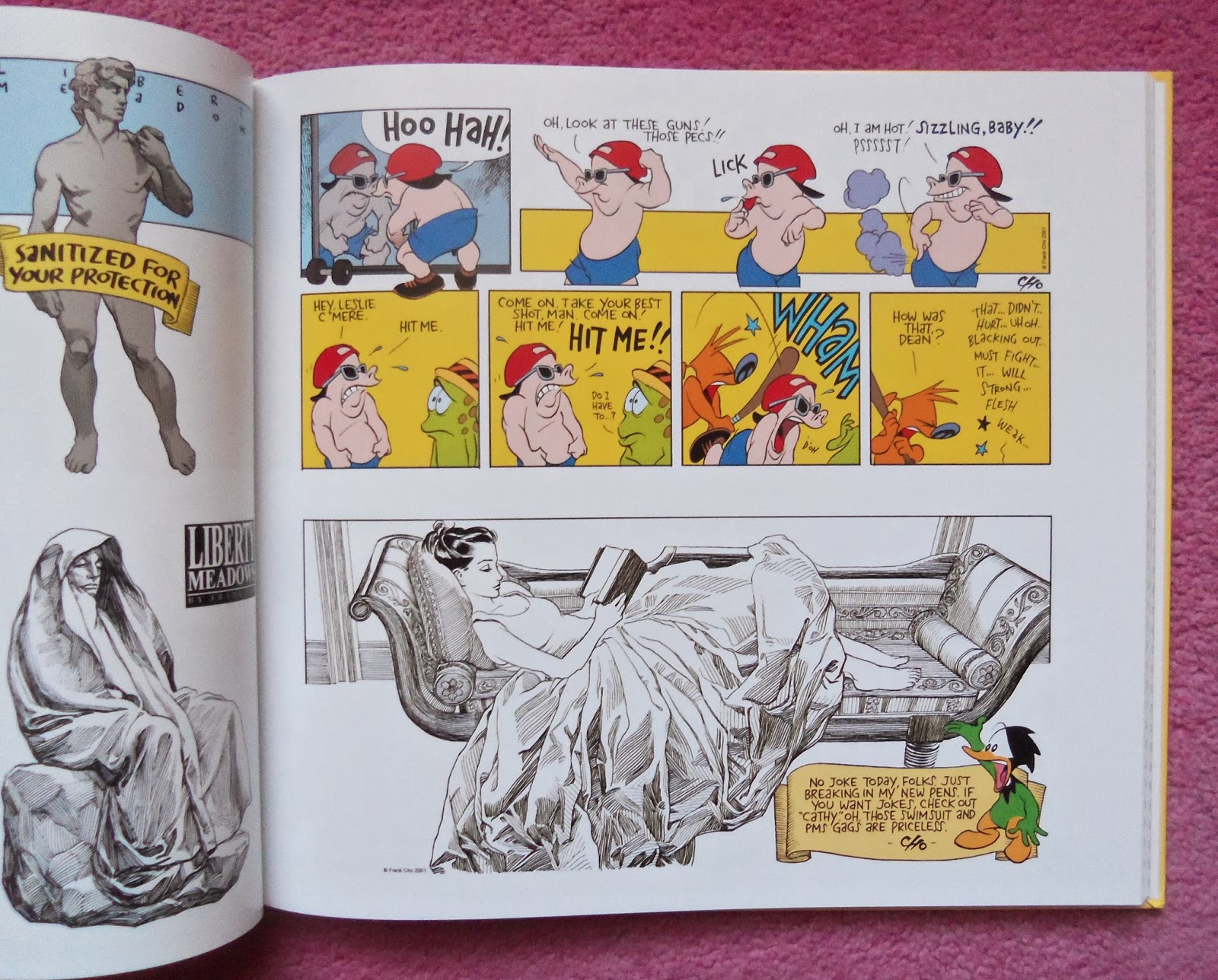 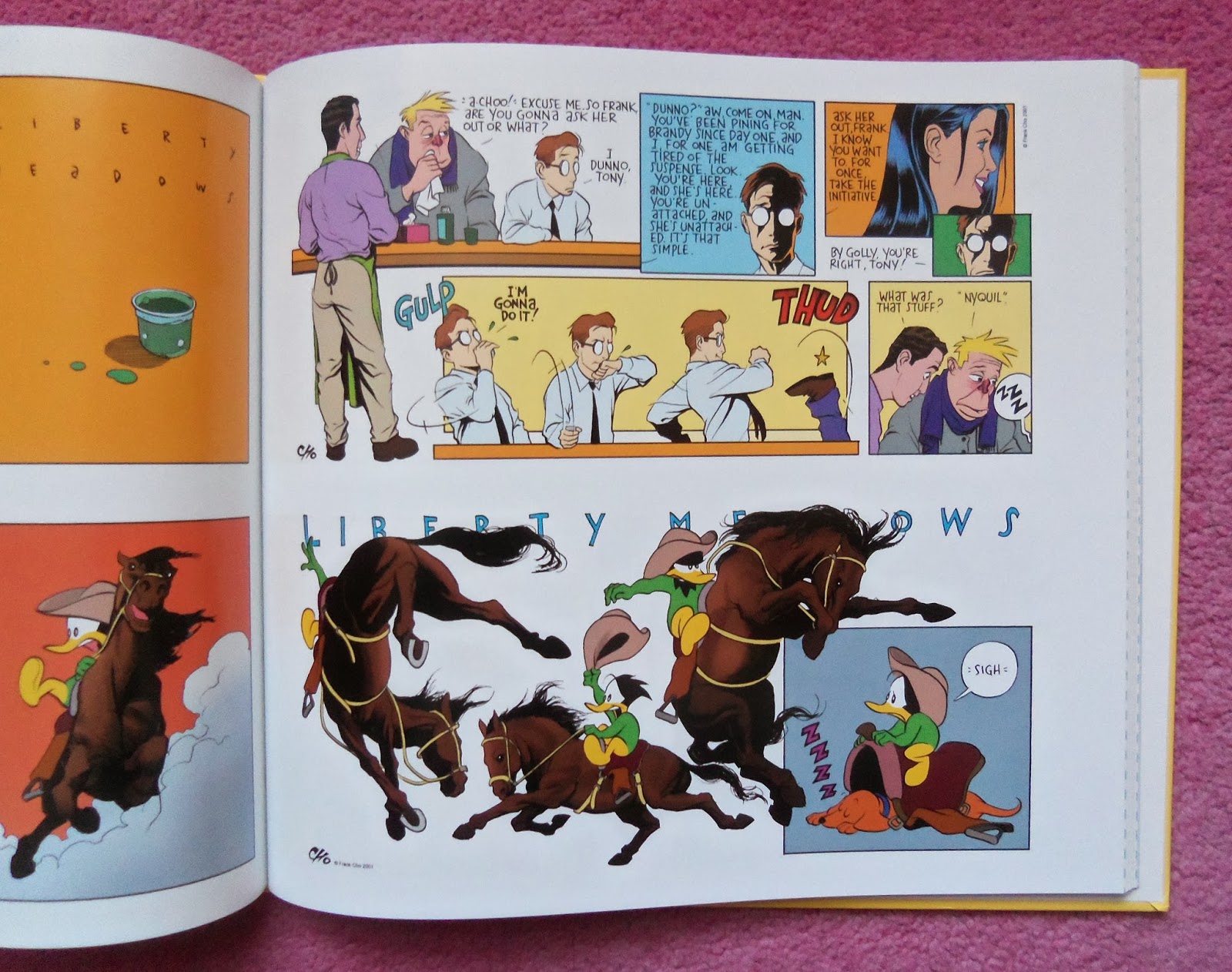 In other news, I read my first Gipi recently: Garage Band. Gipi is another one of those big name comics creators of whom I'd heard of, but never read anything by. I don't think there's a huge amount of his work available in English- Garage Band (pictured here) Notes on a War Story, The Innocents, and They Found the Car are the only translated works of which I'm aware. The latter two, published by Fantagraphics, are out of print, so it was a toss-up between Garage Band and Notes for a War Story. I'm sort of terrible in that I tend to quickly sum a book up after reading its blurb and this seemed to be 'teen boys coming of age' vs 'life amongst horrors of war'. I tend to internally categorise subject matter like the latter as 'serious' and a bit depressing, and prefer to read that kind of thing when I'm in a particular frame of mind, so I decided to go with Garage Band as a starting point.

I guess it's an exercise in how we really shouldn't label anything, because the book took me completely by surprise. It's about a group of 4 lads who are in a band together, and have been given the garage to practice in over the summer, under the condition they stay out of trouble. A thing that I've seen often in these kind of representations is that they tend to be sort of gender-slanted, in that actions, attitudes and portrays are very male-specific- and emotions in such situation is EMOTION capitalised, a thing that's flag-poled and pointed towards as a happening. Gipi does a wonderful understated thing, in letting things slowly play out, showing the boys' personalities and characters gradually through their interactions with one another and their relationships with their family. It's nice, too, to see male friendship depicted in a manner that's supportive and touching, yet blustery and nervous and afraid due to to events and just being a teenager. It's a lovely book- vulnerable and tender, very believable (especially in the scenes between the boys and their respective parents), beautifully tempered with Gipi's watercolours. 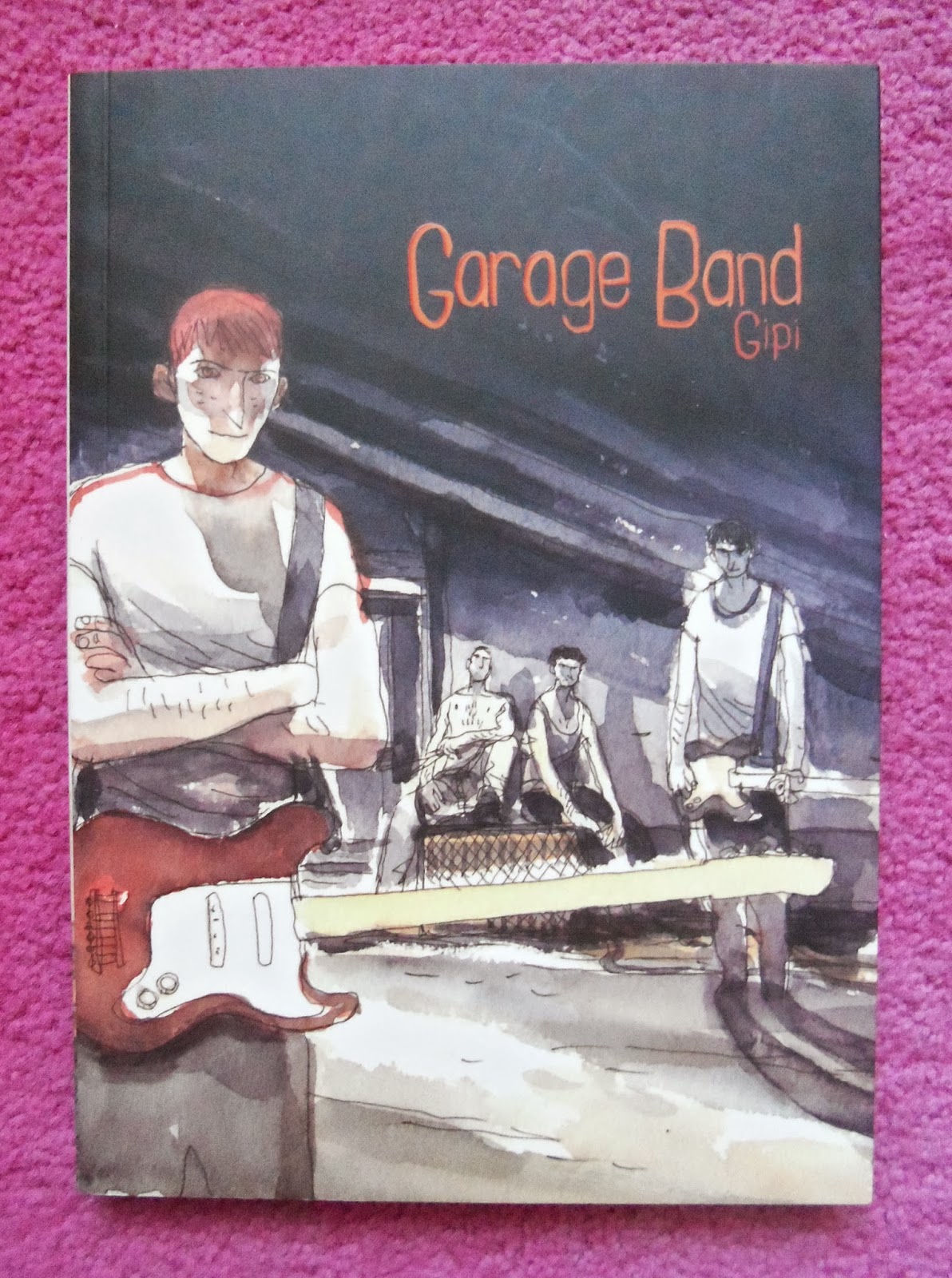 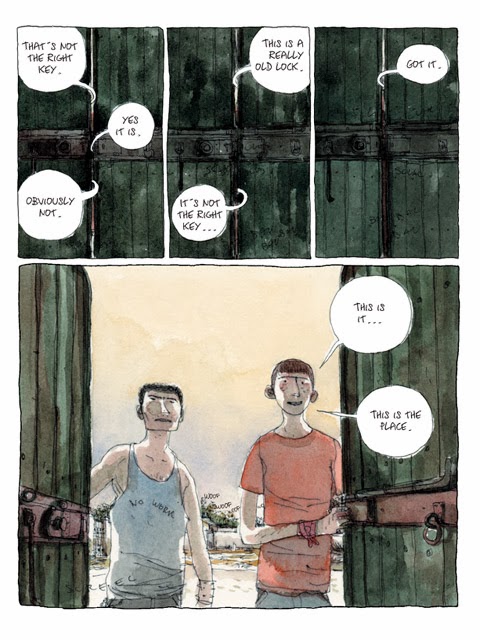 Oh, and I unabashedly loved Paul Jenkins and Humberto Ramo's Fairy Quest after finally reading it. I remember Fairy Quest from back when it was being kickstarted in the summer of 2012 (man, that seems long ago) and I thought it a bit expensive to back. This is the Boom! version released at the tail end of 2013 and it's an attractive oversized, nicely stiff, french flapped edition. I'd imagine it had to be oversized because I can't imagine Humberto Ramos' art being squashed onto a smaller page, but stranger things have happened, as we all know. I'm starting to pick up on and notice colouring more- particularly in relation to artists who don't generally colour their own work, so the difference a colourist makes is thrown into sharp relief. I look at Ramos' art in Revelations, for example, and then here and it's poles apart. Sure, he's altered the style of it to the appropriateness of the subject material, but Leonardo Olea's colouring and design work raise it to a whole other level. Here is a page from Revelations: 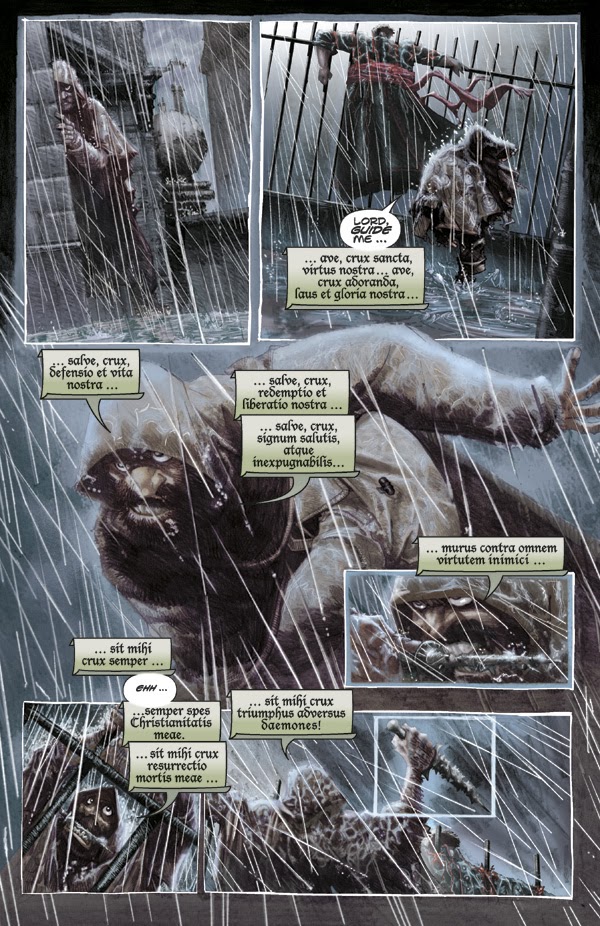 Below you will find pages from Fairy Quest.

I loved this- yes, it's another take on fairytale characters and stories, but I have no objection to those as long as they're done well, with some attempt towards inventiveness made. The conceit here is that the land of fairytale essentially comprises of every single fairytale character playing their roles and acting out the story to which they belong eachtime their book is read in the 'real world.' Over and over and over again. Deviating from the script is against the law and a punishable offence. A small group of rebels has risen and meets secretly. Red Riding Hood and the big bad wolf have become old friends (on the down low). It's all a bit political, but it works, it's not crushingly serious, but enough that it's relatable and amusing. Things begin to unravel, however, as news of the illicit gatherings leaks and arrests are made, forcing Red Riding Hood into action.

I'm not a fan of super-amped, exclusively digital art, but this book is stunning to look at. The look and design of the characters is clever, the anime style sits well with that young-yet-old nature of people like Peter Pan, Cinderella, Red Riding Hood and others who have been around for decades, but remain ever-youthful. Like the best fairytales, it has a nice undercurrent of creepy and unsettling going for it, too. Wolf, especially, is superb: very much a beast and fairly bristling off the page, and given an interesting glimpse of backstory. I'm unsure when Ramos and Jenkins will get to produce another volume or issue of this, but I'd be there in a heartbeat. 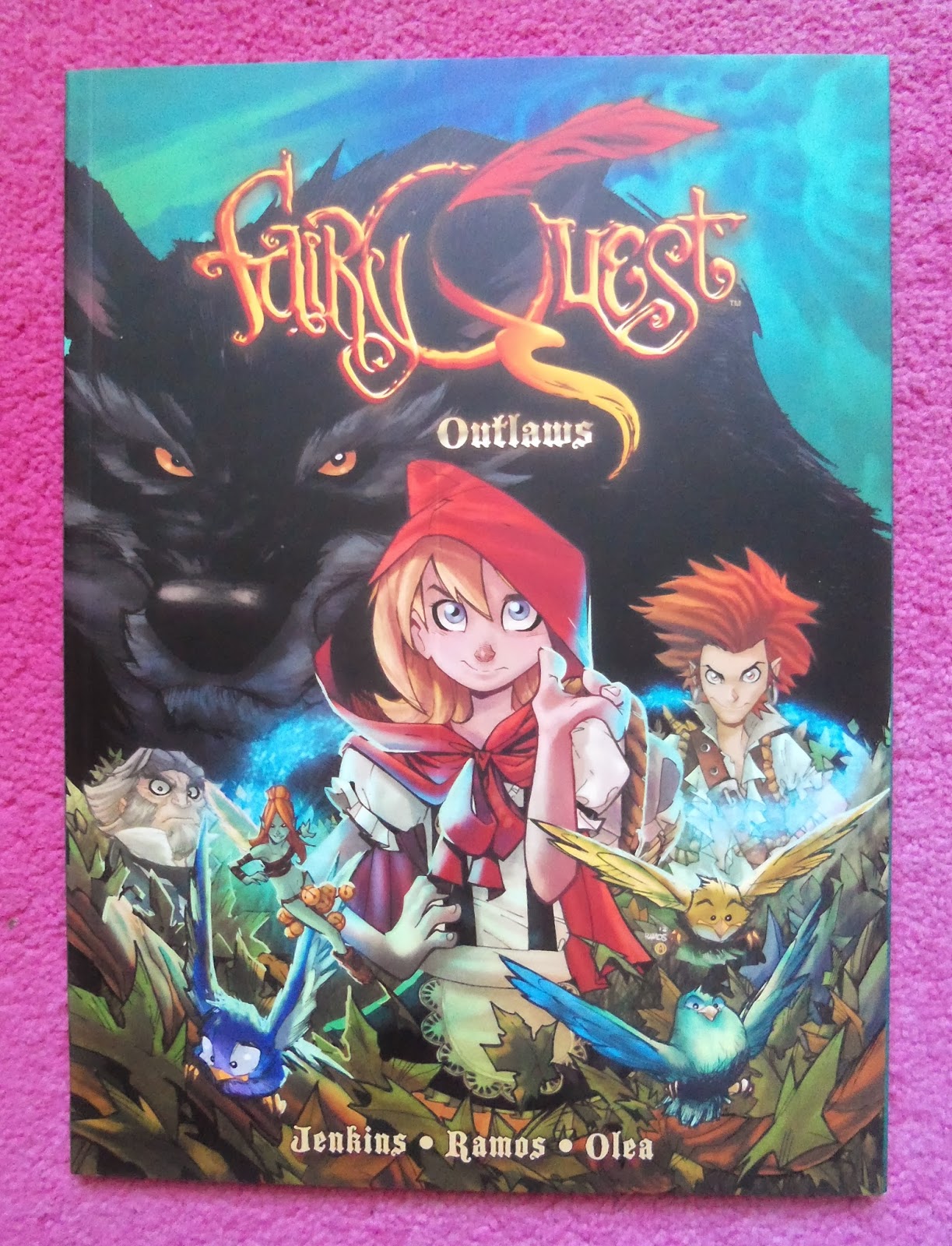 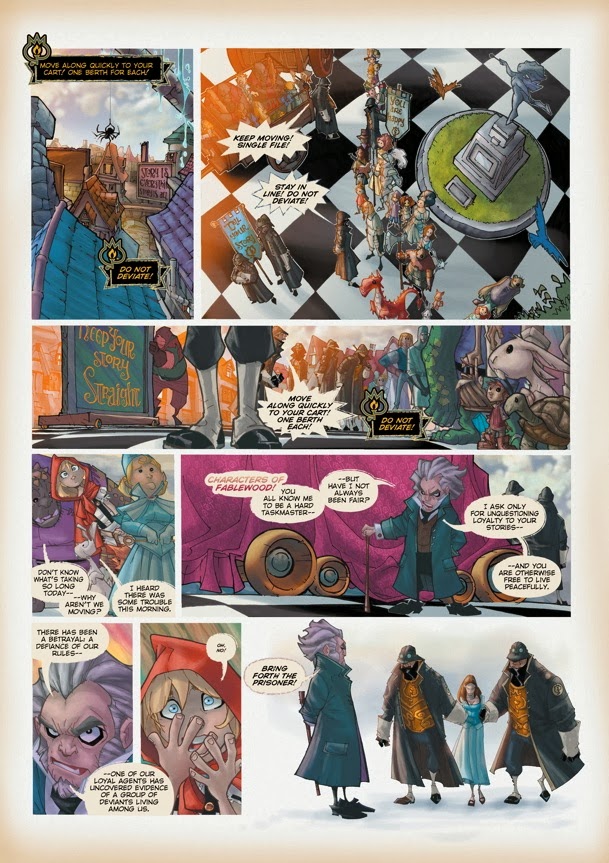 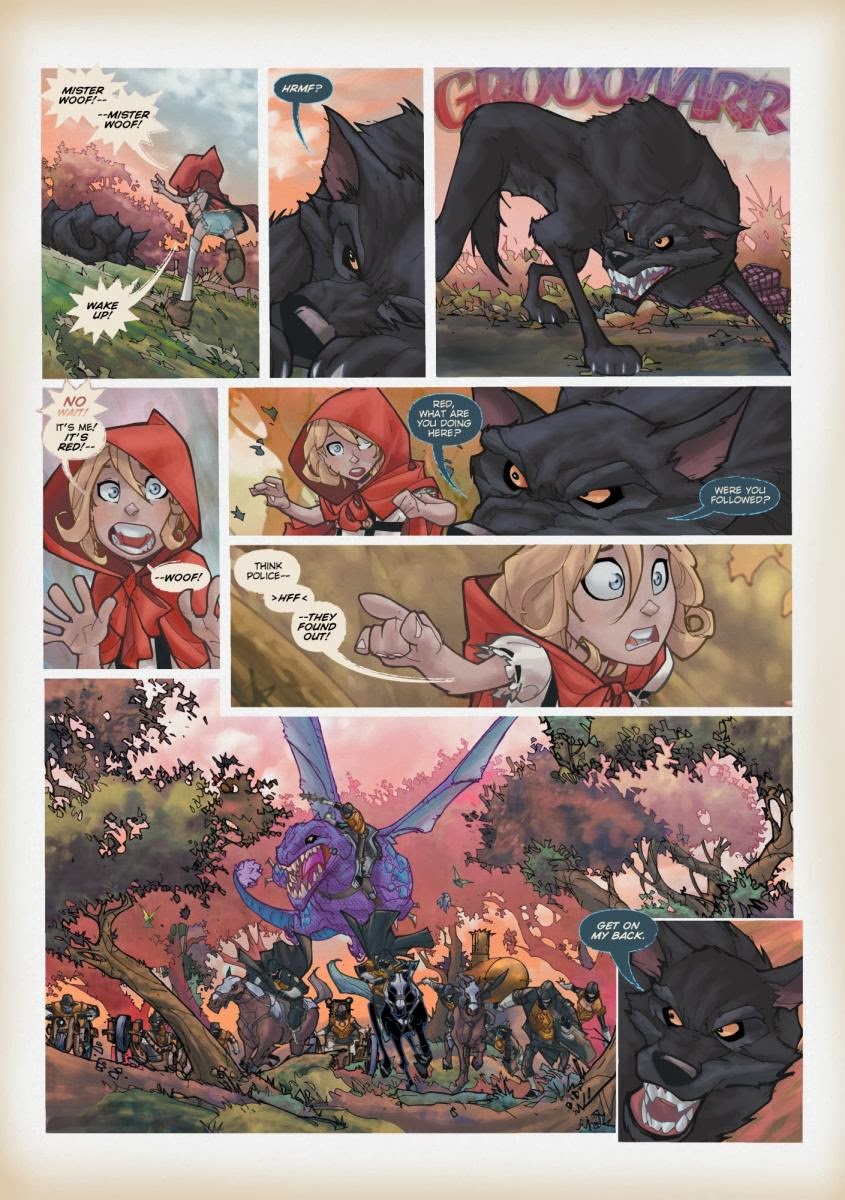 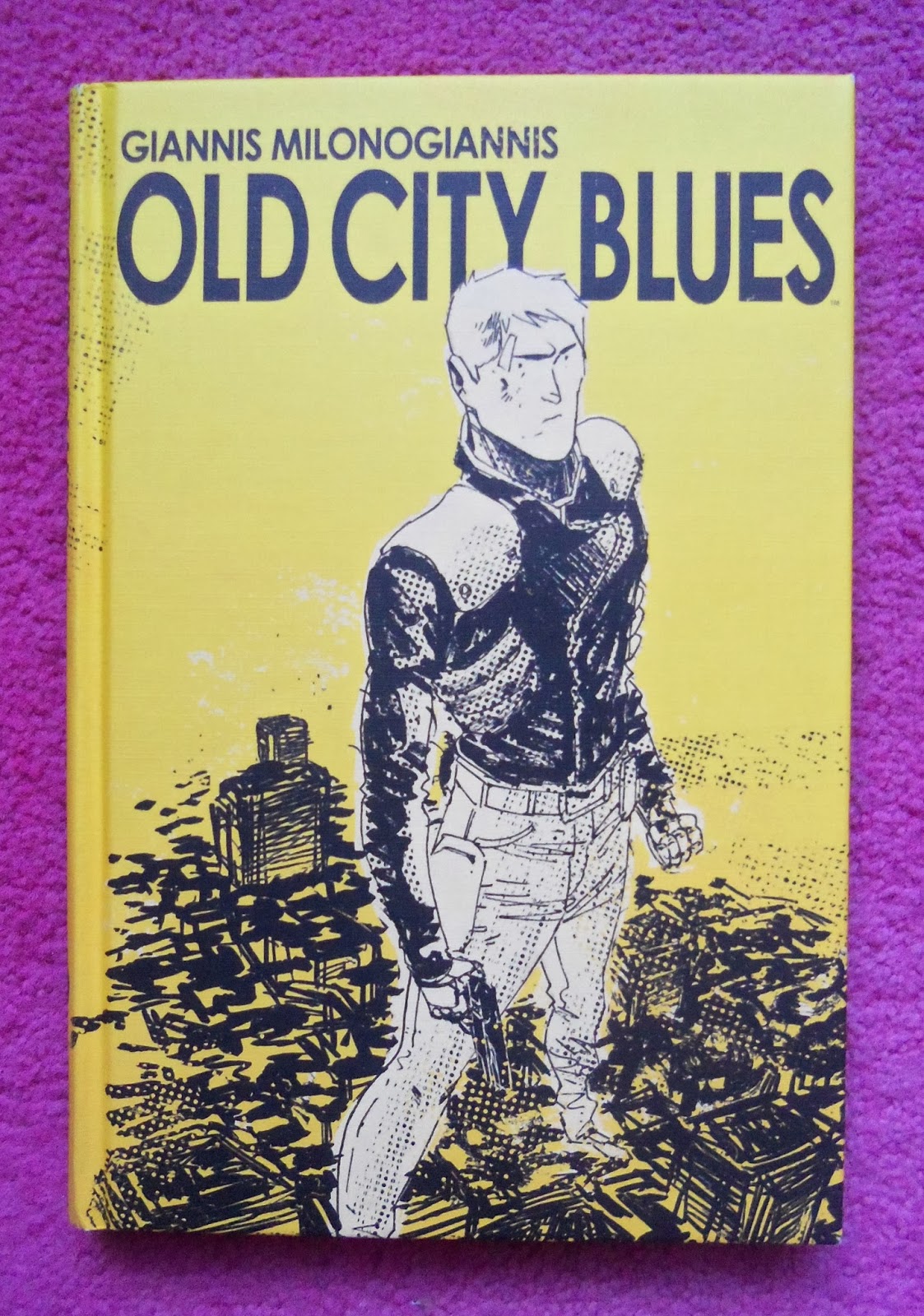 Old City Blues by Giannis Milogiannis: I recently learnt that comics featuring robots, cyborgs, androids and so forth, often set in future-scapes are referred to as 'mecha' comics,  a term which I quite like.which Milonogiannis' narrative is almost mecha-noir: a familiar feeling, rain slashed, semi dystopian future, with a seismic event having led to the destruction and subsequent rebuilding of countries by all-powerful technological corporations. A robot crime  is committed, a dogged police investigator pursues, the final revelation is rather expected. It's a perfectly serviceable tale, one that's made interesting by the choice to focus more on place, environment and people, with the crime bit a secondary running thread.

The appeal in Old City Blues lies in the manner which Milonogiannis visually renders the whole thing- a scratchy, sketchy style that gives real life to a split have and have-nots world. Old rubble and dilapidated abandoned buildings juxtaposed with tall, brightly lit up sky-scrapers, and best of all, the flying robot suits and vehicles which  actually look lightweight and usable. It's Blade Runner bought to the page, but it does feel like the foundations, or the first part of something. Uncertain as to whether I'll buy the second. 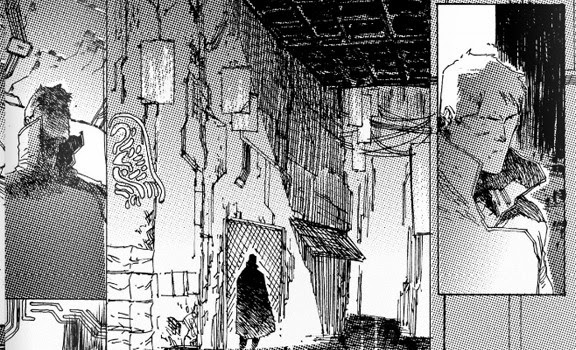 And finally, Stray Bullets by David Lapham: the comics-sphere was unanimously excited about the recent announcement that David Lapham would be returning to his seminal crime comic -and the comics-sphere is so rarely agreed upon anything, that that was an event in itself! I think the only Lapham comic I've read is Silverfish, and that was okay. All the fuss around Stray Bullets got me curious about the series, so Jared lent me his collection (it's out of print, but Image will be publishing a 1000+ page omnibus this year)- I've read the first 3 issues so far and it's good, there's a definite rawness to the black and white art, but I do think it's contextual to a degree- there's a healthy amount of crime comics to choose from now- Criminal, Sin City, that Vertigo Crime series, where I'm told that wasn't the case back when Lapham was producing and distributing these independent. I'll read on though. 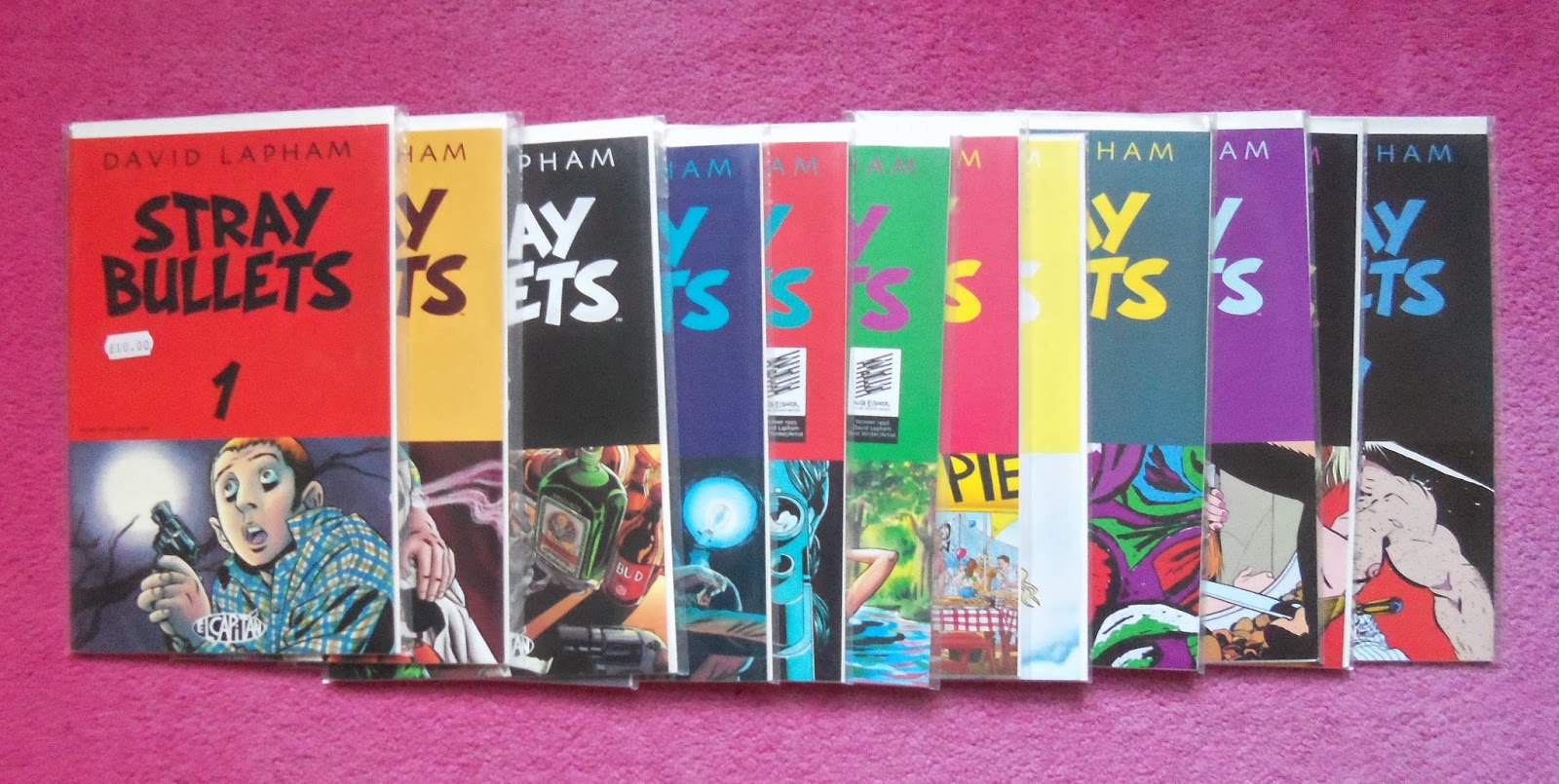